Word to the wise: Don’t mess around with a woman who knows your grandmother.

Tamira, an American college student, was surprised when she received a message out of the blue from a man she attended high school with. She was even more surprised when his messages progressed from aggressive to overtly sexual to downright nasty in a matter of minutes.

Yet she wasn’t so caught off guard to let that kind of behavior go unchecked. She soon taught the man a brutal lesson by forwarding all of his messages to his grandmother — including the one of his genitals he sent her unsolicited. 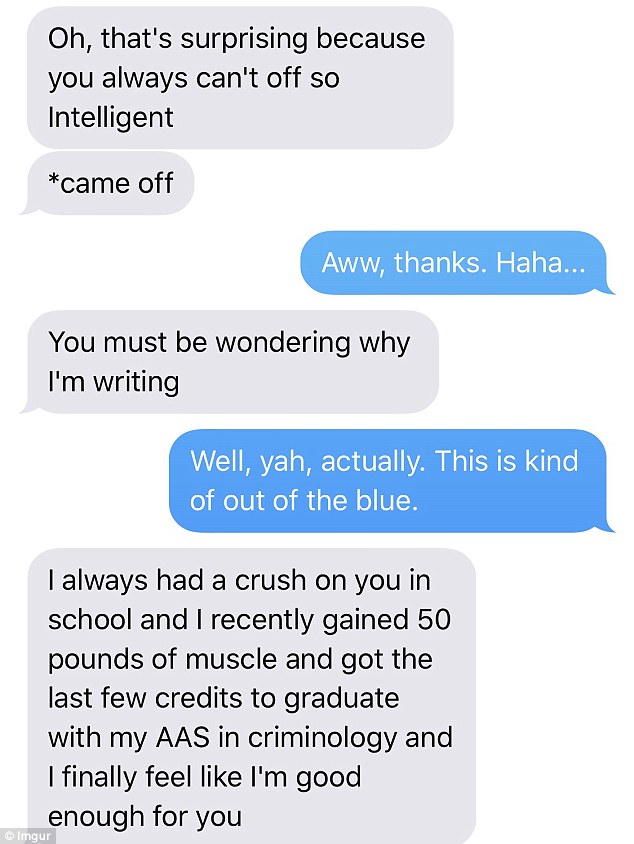 Oh, hey there… Tamira was surprised to get a text from Hank out of the blue

Tamira has since uploaded the entire exchange to Imgur, where its earned lots of attention.

From the get-go, there were some red flags — but Tamira seems to be good-matured enough to remain polite and give Hank, her old classmate, the benefit of the doubt.

After he texted her a simple ‘heyy,’ Tamira asked who he was, explaining that she has a new phone an doesn’t recognize the number.

Hank seemed immediately offended, writing: ‘Here I’m trying to be friendly and I feel like you’re trying to get rid of me.’

Tamira continued to be polite, and Hank eventually told her who his was and that they shared Algebra II together.

‘You must be wondering why I’m writing,’ he said, clearly not recognizing the strangeness of his behavior despite acknowledging it indirectly. 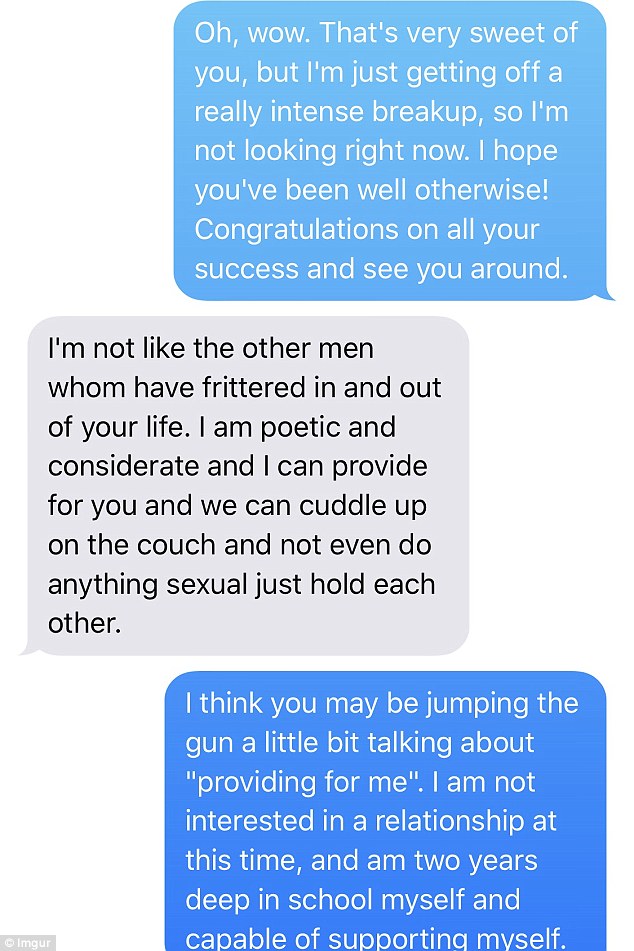 Yikes: He wasted no time telling her he had a crush on her and explaining how he’d put on muscle since graduation 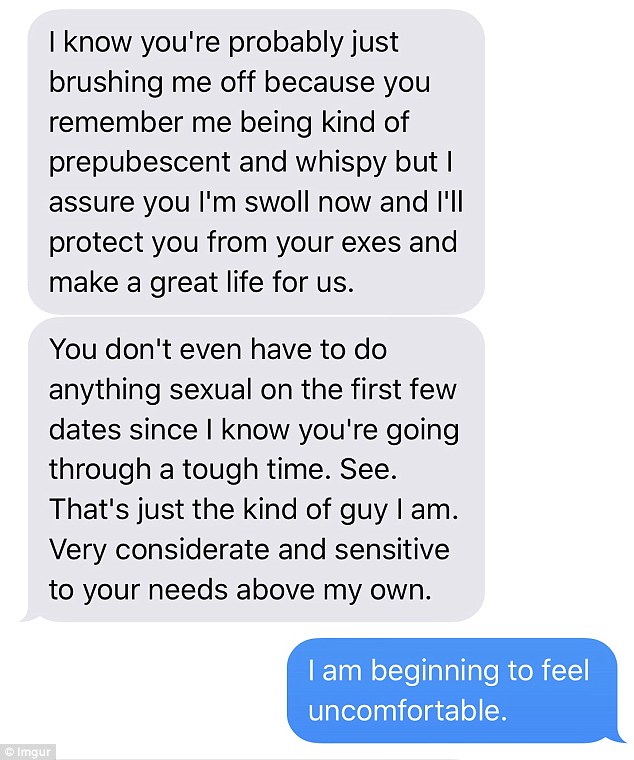 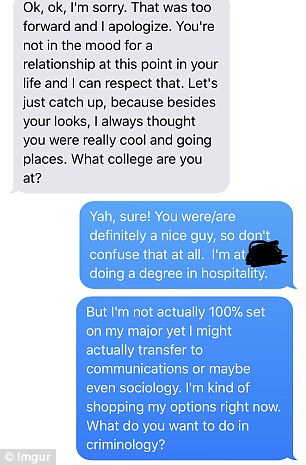 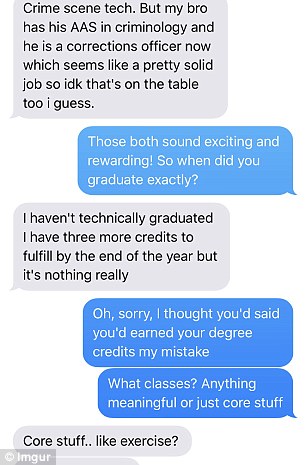 Transparent: He persisted, trying to keep the conversation going in a friendly manner

Cringe: When she asked about his classes, he misunderstood and took it as an opportunity to tell her, ‘My core is jacked’

‘I always had a crush on you in school and I recently gained 50 pounds of muscle and got the last few credits to graduate with my AAS in criminology and I finally feel like I’m good enough for you.’

‘Oh, wow,’ Tamira replied. ‘That’s very sweet of you, but I’m just getting off a really intense breakup, so I’m not looking right now. I hope you’ve been well otherwise! Congratulations on all your success and see you around.’

Not taking the hint — or rather, the very direct but polite dismissal — Hank continued to press.

‘I’m not like the other men whom have frittered in and out of your life,’ he wrote, incorrectly using ‘whom’ instead of ‘who’ and misusing the word ‘frittered’.

‘I am poetic and considerate and I can provide for you and we can cuddle up on the couch and not even do anything sexual just hold each other.’

‘I think you may be jumping the gun a little bit talking about “providing for me,”‘ Tamira answered. ‘I am not interested in a relationship at this time, and am two years deep in school myself and capable of supporting myself.’ Chill, dude… When she tried to end the conversation nicely, he pushed on aggressively 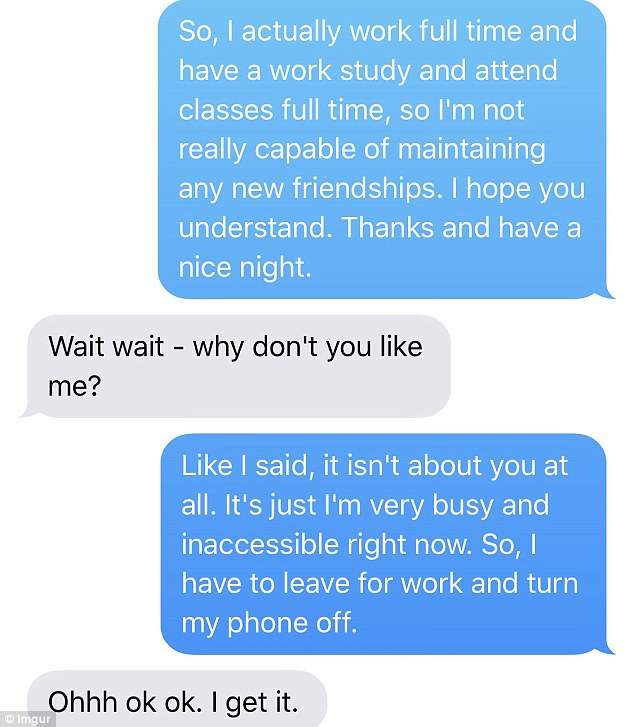 ‘I know you’re probably just brushing me off because you remember me being kind of prepubescent and whispy,’ he replied, before writing what may be the most cringe-worthy line of the exchange: ‘But I assure you I’m swoll now and I’ll protect you from your exes and make a great life for us.’

The word ‘swoll’ is slang for being muscular.

‘You don’t even have to do anything sexual on the first few dates since I know you’re going through a tough time,’ he added, in what he must have believed was a chivalrous show of generosity. ‘That’s just the kind of guy I am. Very considerate and sensitive to your needs above my own.

When Tamira told him he was making her uncomfortable, he apologized, claiming that he could ‘respect’ that she didn’t want a relationship.

He then changed courses, saying they should catch up anyway — ‘because besides your looks, I always thought you were really cool and going places.’ 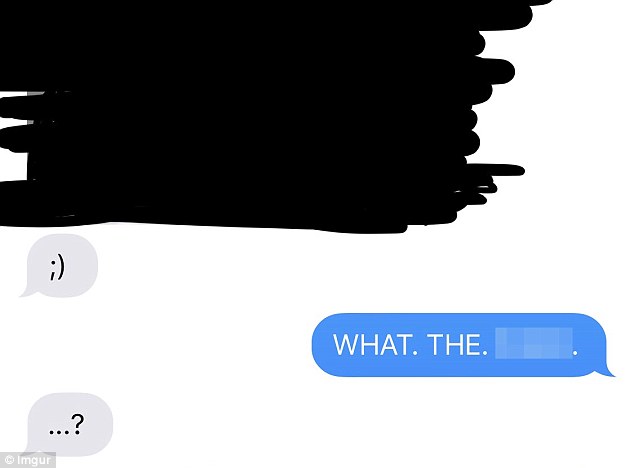 Woah! Suddenly, he sent her a photo of his genitals with an odd winky smiley face 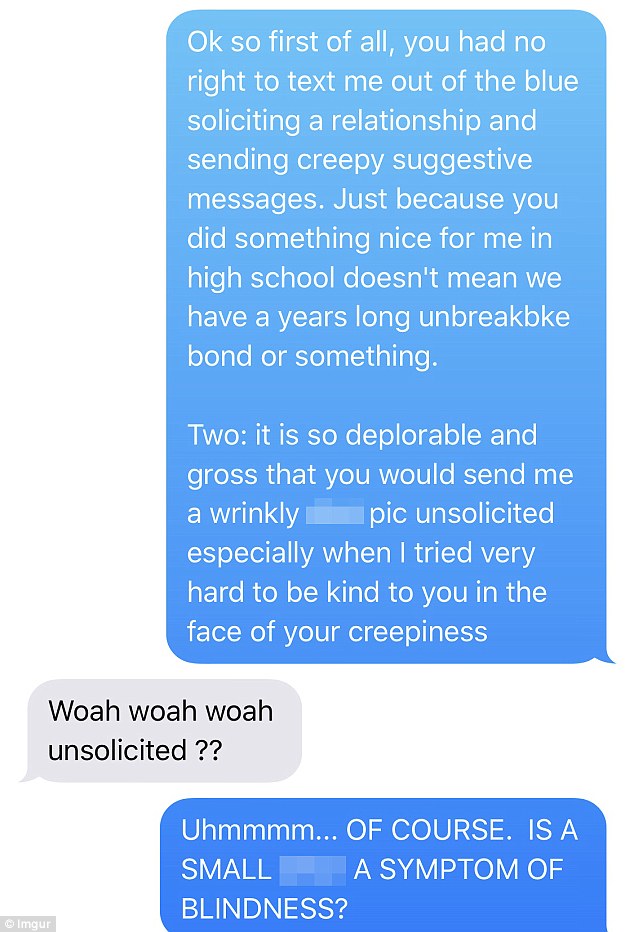 Firm: Tamira stopped being polite, telling him plainly how disgusting his behavior was

Still trying to be nice, Tamira continued to engage with him, talking about school and asking what classes he was taking: ‘Anything meaningful or just core stuff?’

‘Core stuff… like exercise?’ he asked, misunderstanding. ‘My core is jacked.’

After a few more messages, Tamira said she had to go to work and said goodbye — which set this ‘nice guy’ off again.

‘Wait wait — why don’t you like me?’ he wrote, to which she patiently replied that she simply needed to go to work.

‘Ohhh ok ok. I get it,’ he answered — before messaging her an unsolicited picture of his genitals.

Finally, Tamira lost it, and no longer responded nicely. She told him in no uncertain terms that he was being ‘creepy’ and that it was’deplorable and gross that you would send me a wrinkly d*** pic especially when I tried very hard to be kind ot you in the face of your creepiness.’

‘Woah woah woah unsolicted?’ Hank answered, insisting that Tamira being ‘nice and kind’ to him could only mean that she was being coy. (Hank, however, spelled it ‘koy’ and completely misused the word ‘juxtapose’.) 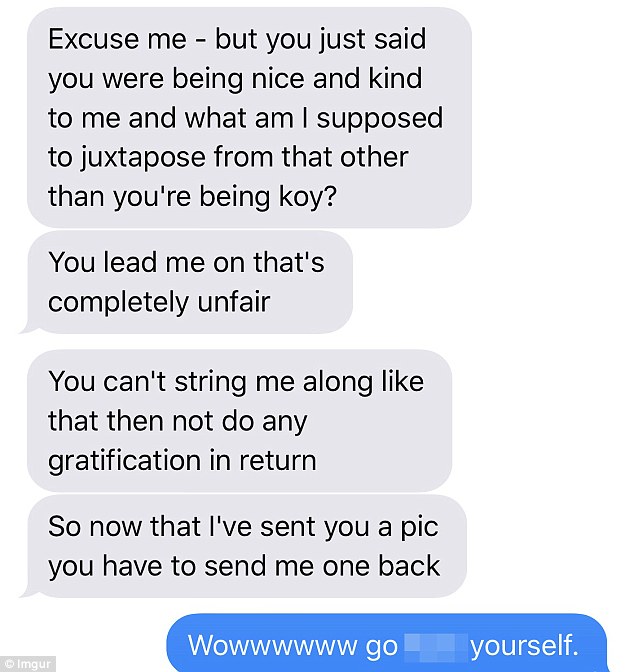 ‘Nice guy’: Hank turned nasty, insisting Tamira was leading him on simply by being nice 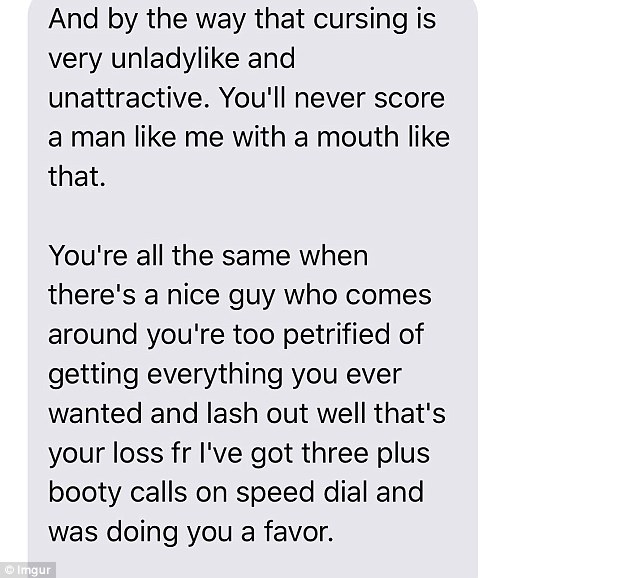 Oh, really? He also insisted he was a ‘nice guy’ and she was in the wrong 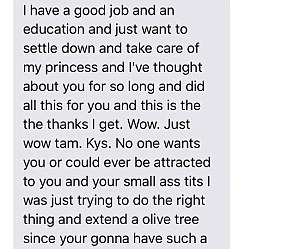 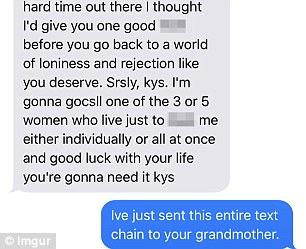 Awful: He started slinging insults and telling her ‘kys,’ meaning ‘kill yourself’ — which is when she said she’d be sending the exchange to his grandma

He grew nastier, accusing her of leading him on and insisting she send him a nude photo in return. He insulted her, told her to kill herself, and then tried to insist that he wasn’t that interested in her anyway.

‘I’ve just sent this entire chain to your grandmother,’ she answered.

Then, as proof, she shared a screenshot of her exchange with his grandmother on Imgur. She was able to track the woman down on Facebook, and seems to have known her name because they attend the same church.

‘Hello Mrs. [redacted],’ she wrote, along with screengrabs of the texts. ‘I’m sorry you have to see this. I wanted you to know what Hank is up to in his free time, because I’m still reeling from this exchange and did not know who else to reach out to to prevent it from happening to anyone else.

‘You may want to discuss this with your grandson because, as you know, sending photos of this [nature] can have legal and reputations repercussions.

‘My mom sends her regards and looks forward to seeing you in church,’ she added. 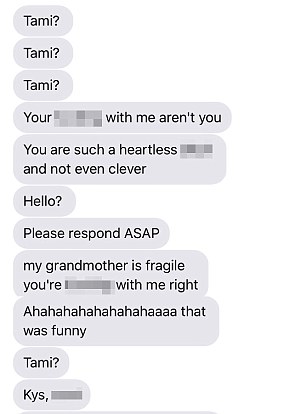 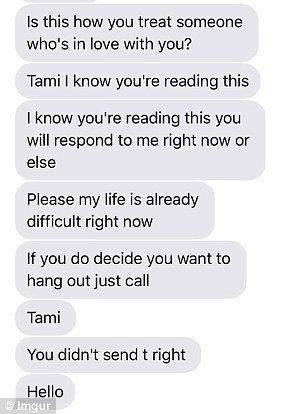 Panic: Hank started to freak out, switching back and forth between begging for a response and insulting her

Hank, unsurprisingly, panicked, sending Tamira a string of messages calling her a ‘heartless b****’ while simultaneously begging her to respond.

‘Is this ow your treat someone who’s in love with you?’ he wrote after calling her a ‘c***’ and telling her to kill herself again.

‘If you do decide you want to hang out just call,’ he added.

Unfortunately for Tamira, Hank’s grandmother didn’t respond to the messages as she hoped she would.

Though his grandmother said she was sorry Tamira experienced such a thing and promised that his conduct would be addressed, she also told the young woman that she could have handled herself ‘a bit more courteously.’

Then, outrageously, she told Tamira more about her grandson, just in case she does decide to go out with him after all. 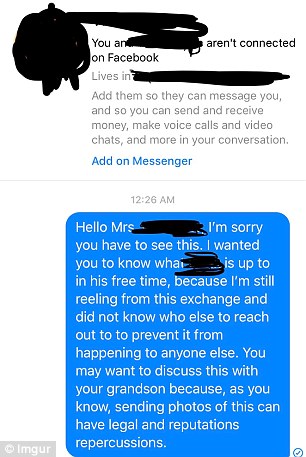 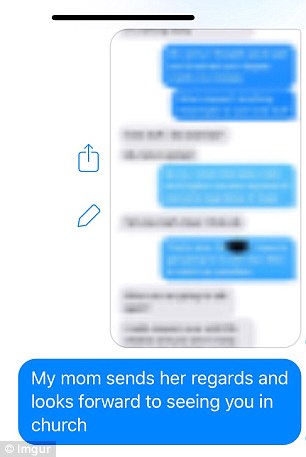 Tracking her down: Tamira found Hank’s grandma on Facebook and sent her the messages. She even got in a mention of the church the woman goes to with Tamira’s mom 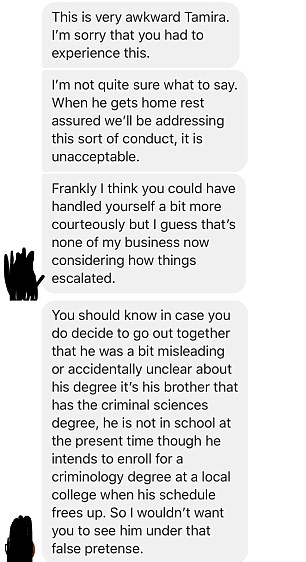 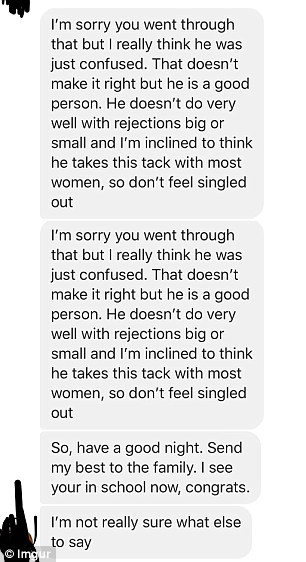 Two-sided: Though his grandma apologized, she also made excuses for Hank 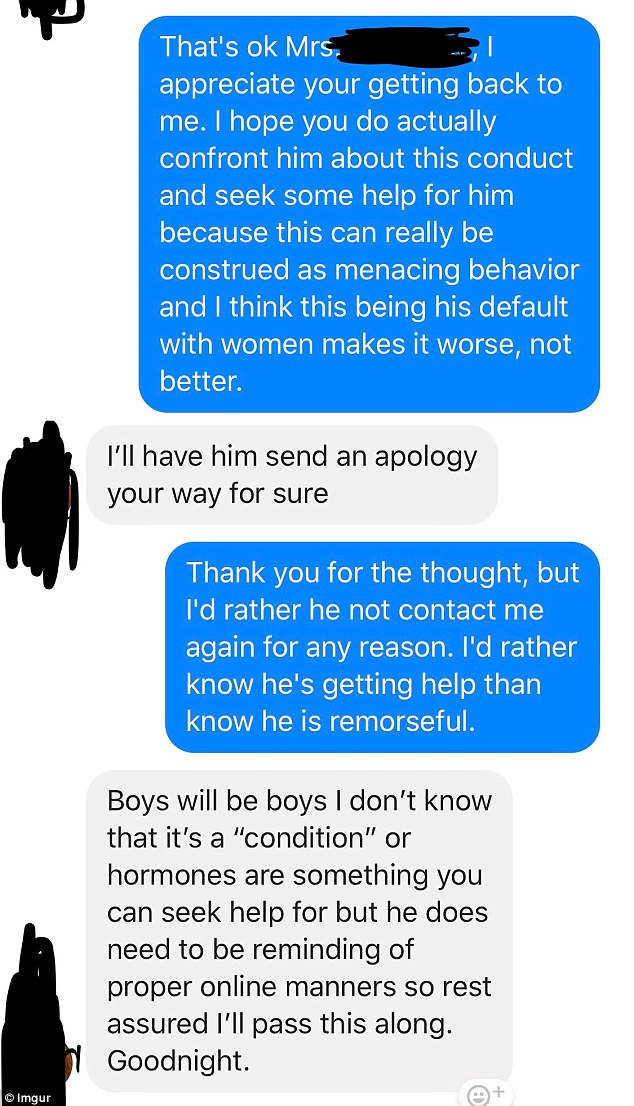 Oh, dear… She signed off by telling her that ‘boys will be boys’ — the kind of attitude that likely encouraged his bad behavior to begin with

‘Boys will be boys,’ she added, an indication of how Hank likely grew to behave in such a way.

Tamira told Imgur users that she has since blocked Hank on her phone and social media. She also explained why she engaged with him in the first place instead of ignoring him.

‘I was getting ready for work and distracted. It’s a small enough neighborhood. I just wanted him to go away without hard feelings,’ she said.

‘And he was not bad at all in high school so this was totally unprecedented. It wasn’t until the d*** pic that I realized it had been.’

As for why she contacted his grandma, she said:   ‘She had to understand the gravity of the situation.’