It’s not often a sweet potato catches your eye.

But this one made a Northern Territory shopper do a double take when she stumbled across the phallic-shaped root vegetable at a Darwin supermarket.

Flight attendant Ally Hobbs spotted the misshapen spud that appeared to be rather rude.

The keen-eyed shopper said she couldn’t help but laugh when she saw the raunchy-looking potato sitting alone on the shelf.

‘It was starting to [go off], it was a bit shrivelled at the end,’ she told NT News.

‘It was the last one there so everybody had thought the same thing as us, that it wasn’t very tasty.

‘I thought it was pretty funny. I waved it in my friend’s face and took a sneaky photo and sent it to my boyfriend.’

She estimated the size of the potato fairly accurately reflected the body part it resembled.

‘It was pretty much to size – maybe on the slightly smaller size,’ she said.

It isn’t the first time people have shared their hilarious photographs of imperfect produce found growing in their veggie patch. 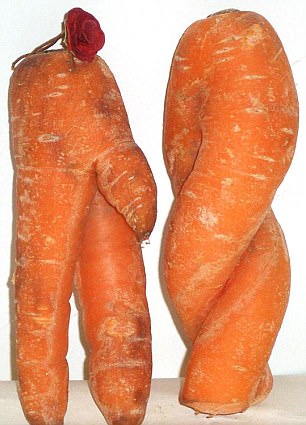 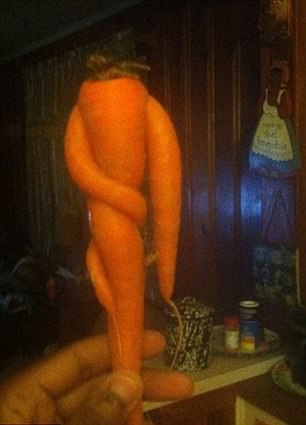 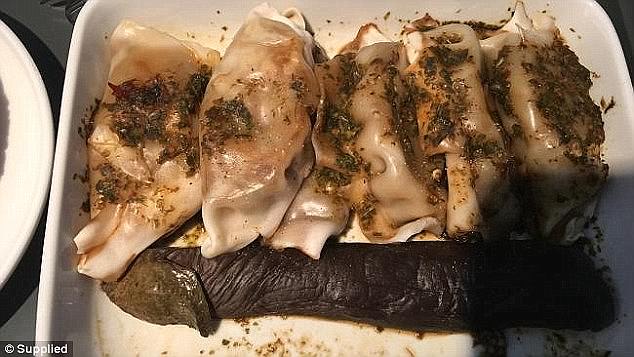 Last December, a woman travelling business class from Sydney to Brisbane was shocked when she found an unusually shaped vegetable served with her meal

From knobbly carrots, deformed tomatoes to abnormal eggplants and weird-looking parsnips, there’s an inevitable supply of misshapen fruits and vegetables that may need a bit of dressing.

Several root vegetables that were plucked from the ground appeared to have formed into intimate body parts while others seemed hilariously bizarre.

Many carrots pulled from the garden were misshaped, with some appearing to be shaped into a human-like figure with legs.

Last December, a woman travelling business class from Sydney to Brisbane was shocked when she found an unusually shaped vegetable served with her meal.

The woman shared an image of her dumplings, with a phallic-shaped root vegetable on the side.