A 71-year old woman from North Carolina checked into hospital with a pain in her neck that had lingered for eight days.

Doctors immediately performed a series of checks, but couldn’t find any obvious reason for the pain.  She was able to move her neck without issue, and there was no obvious sighs of inflammation. An X-ray didn’t turn anything up, either.

A CT-scan revealed, however,  that a long splinter-like object was protruding up through her throat and was curved around just to the right side of her thyroid. 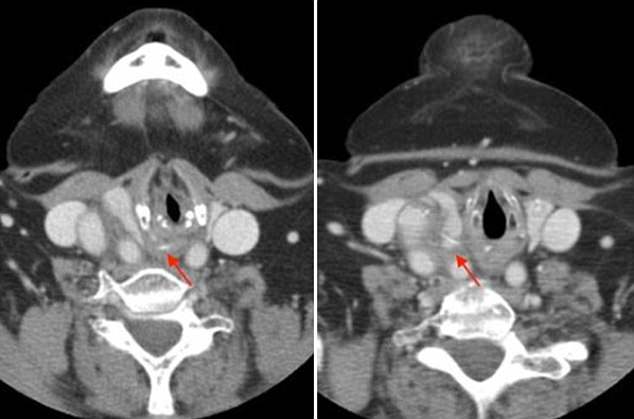 Only after looking inside her throat did they discover a three centimetre fish bone. The woman had eaten fish eight days before when the pain started.

She was taken to the emergency room and into surgery to rid her of the invasive bone.

After the surgery, she reported the symptoms had disappeared.

According to a case report published in the BMJ, a medical journal: the bone only narrowly missed her carotid artery, a major artery that supplies blood to the brain.

Had it been cut or even nicked it would almost certainly have killed her.

Then the woman was put on a course of antibiotics for three days through an IV. She was given a prescription for antibiotics and discharged.

‘Our patient had gone over one week with an ingested foreign body that migrated through the wall of her oesophagus to lodge in the soft tissues of the neck,’the report says.

‘Furthermore, despite relatively precise CT localisation of the foreign body, the authors had difficulty finding the bone and only did so after skeletonising a vital nervous structure in the neck.’

‘The most common locations for fish bones to become lodged are the palatine tonsils, followed by base of tongue, vallecula and pyriform sinuses.’

‘Many of these cases can be managed with direct or endoscopic visualisation with subsequent removal of foreign body.