When Chelsea Anders saw a box of face masks at her local Ulta last month, she thought it would be a great gift from ‘Santa’ to her 10-year-old stepdaughter, Cadence.

On Christmas morning, the little girl pulled it out of her stocking and decided to use the ‘unicorn’ mask.

Within two minutes, she complained to her parents that it was burning. When Anders, 27, ripped the mask off, little Cadence’s face was bright red.

Anders, of Waukee, Iowa, said she washed her stepdaughter’s face for 10 minutes every 20 minutes for three hours – and applied aloe vera – before the redness went away.

She is one of just several women and mothers who told DailyMail.com they or their children were left with redness and burns on their faces after using products from Yes To.

The company has since pulled one of its masks, Grapefruit Vitamin C Glow-Boosting Unicorn Paper Mask, from stores after dozens of complaints via phone calls, emails and on its social media accounts. 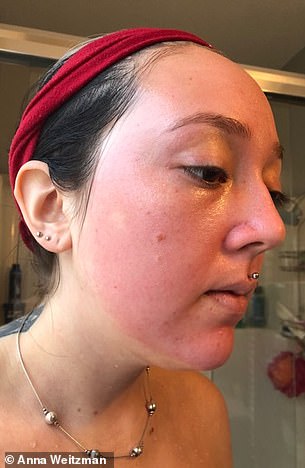 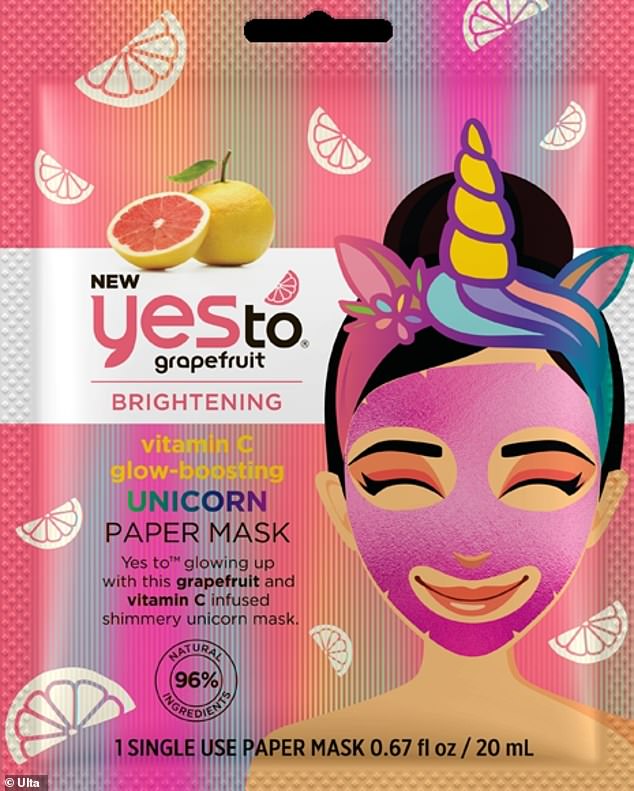 A direction on the back of the package (pictured) told consumers: ‘Tingling? Yes, it’s working!’

The recall came after social media was flooded with photos of women with reddened faces who said they used the unicorn sheet masks, a purple-colored paper mask meant to ‘brighten’ the skin.

Anna Weitzman, 26, said she bought the masks from her local Target in San Francisco as a present for her girlfriend because she thought they were ‘cute’ and ‘kid-friendly’.

Yes To doesn’t say that it’s products are meant for kids, but many consumers feel that they are targeted towards children.

‘I had used their face masks multiple times before…so we put them on and within about four minutes, my girlfriend said she was feeling that she was in pain,’ she told DailyMail.com.

‘So I began feeling it too and our skin began to feel like something was burning. We washed our faces to get the residue off…but it burned for the whole day, like eight hours.’

Weitzman said she could only use cool water on her face for a day-and-a-half and she couldn’t put on make-up because her skin was so sensitive.

Kayla Pegues, 35, said she also bought the mask at Target in her hometown of Mount Vernon, Washington.

Within five minutes of applying the mask, she said she started feeling really hot.

‘I took it off and my face was just bright red and it looked and felt like a severe sun burn,’ she told DailyMail.com.

‘I thought I was having an allergic reaction and I never had one like that before…I’m just super glad my nine-year-old daughter didn’t use it.’

Anders said that after her stepdaughter’s reaction to the product, she decided to try it herself to see if the problem was the mask or just the young girl’s sensitive skin.

She had the same reaction.

‘I had to apply aloe vera for two days and I couldn’t take hot shower for three days because it was so painful,’ Anders said. 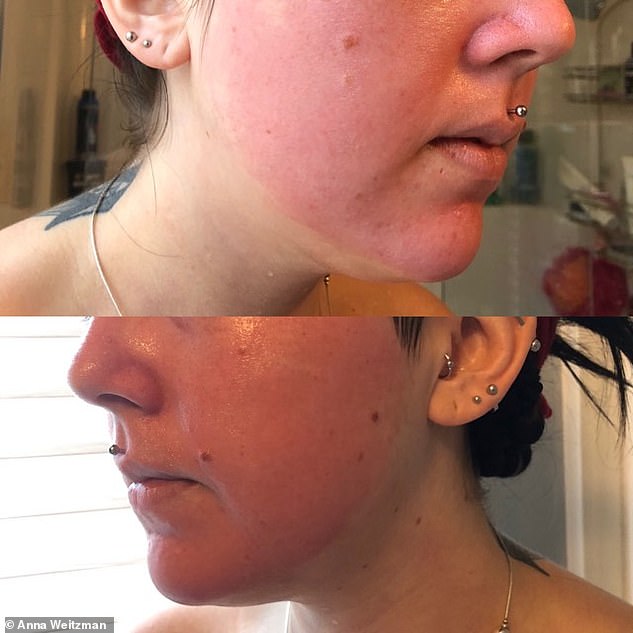 Weitzman (above and below) said Yes To offered her a $10 gift card to Target as compensation, but she is not accepting it

Many of the women and girls who used the masks said they were hesitant to take them off even after feeling a burning sensation because of an instruction on the back of the package that said: ‘Tingling? Yes, it’s working!’

Dr Jason Miller, a dermatologist at Schweiger Dermatology Group – which has offices in New York, New Jersey and Pennsylvania – says the very tingling sensation the product is encouraging should be cause for alarm.

‘That’s your skin’s way of telling you that something is wrong,’ he told DailyMail.com.

‘We do chemical peels on patients and we take a layer of skin off, which can have a tingling sensation, but that’s being supervised under a medical provider.’

It’s not clear which ingredients, or ingredients, are causing the reactions but Dr Miller says it could be a host of things including vitamin C and lactic acid.

Both of these, when applied in high concentrations, have been proven to cause skin irritations. 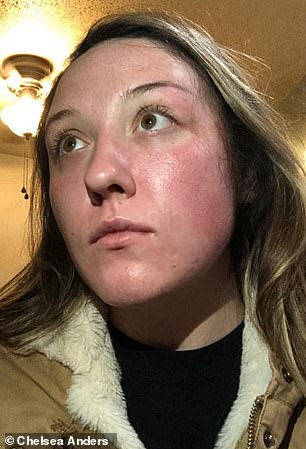 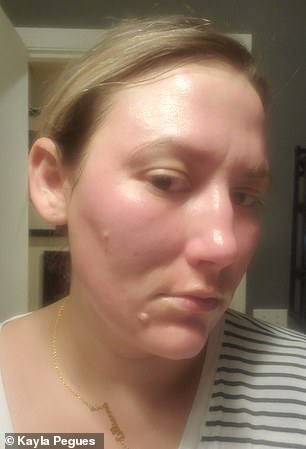 Anders, 27 (left), from Waukee, Iowa, said she tried the mask after her stepdaughter used it and that she couldn’t take a hot shower for three days. Kayla Pegues, 35 (right), from Mount Vernon, Washington, said her face looked and felt like a ‘severe sun burn’

Multiple complaints were posted to Yes To’s social media accounts as well as retailers who sell the mask, including Target and Ulta.

On January 3, Yes To said it was removing the unicorn mask from store shelves. As of Monday, it is not available for purchase on Target’s website, but it is from Ulta and Amazon’s websites.

Consumers have complained about other Yes To products, including the charcoal mask and the cucumber under-eye masks, but no others masks have been pulled.

All the women that spoke to DailyMail.com says they hope Yes To is encouraged to test their products better and have clear warning labels about skin irradiation.

Weitzman said that, after emailing the company, representatives contacted her back and offered her a $10 Target gift card as compensation.

Yes To did not immediately reply to DailyMail.com’s request for comment.