Women are more creative during the fertile stage of their monthly cycles, study finds

Women in the fertile stages of their monthly cycle show an increased level of creativity compared to other times of the month, researchers claim.

A study, which involved 751 women completing a creative task was carried out in Poland by experts from SWPS University of Social Sciences and Humanities in Warsaw.

The team studied women with regular menstrual cycles who were not using hormonal contraceptives, to get a baseline for the link to creativity.

They found the women were better at creative thinking tasks immediately after ovulation, which is the time when they would be most likely to conceive.

It’s thought women evolved to show more creativity at this time as it helped them attract a mate, according to Dr Katarzyna Galasinska, the study’s co-author.

Women in the fertile stages of their monthly cycle show an increased level of creativity compared to other times of the month, researchers claim. Stock image

Creative thinking is a defining human feature, that has helped provide solutions that contributed to our long-term survival and evolution.

However, according to signalling theory, creativity could also have evolved through sexual selection as a potential fitness indicator.

In a new study, Polish researchers tested one implication of this theory.

Specifically, that if creativity can serve as a signal of women’s fitness, then there should be an observable increase in creative thinking in the fertile phase of the ovulatory cycle compared to other non-fertile phases.

They found a positive correlation between the probability of conception and both creative originality and flexibility among 751 volunteers.

For the study, published in the International Journal of Environmental Research and Public Health, researchers studied a group of Polish women, all aged between 18 and 35.

The women gave the researchers information about their menstrual cycles to allow them to track when they would be ovulating.

For the experiment, the women were shown a picture of an ambiguous scene featuring lots of different people.

They were then asked to generate as many questions as they could based on that scene, trying to be as creative as possible, within five minutes.

Their ideas were then scored by independent raters to determine their creativity and originality.

The results revealed that the higher the women’s probability of conception, the more original ideas were generated and higher they were rated.

The ideas generated close to ovulation were also more varied and included more frequent changes in perspective than those not near ovulation.

‘It means that the peak of fertility in the middle of the cycle involves changes visible not only on the physiological but also on emotional, cognitive, and behavioural levels,’ said Dr Galasinska.

‘Women evolved in the way that when the time to conceive occurs, they unconsciously start to behave differently; the goal of reproduction – namely, to find the best candidate and possess his genes for offspring – is activated in them.’ 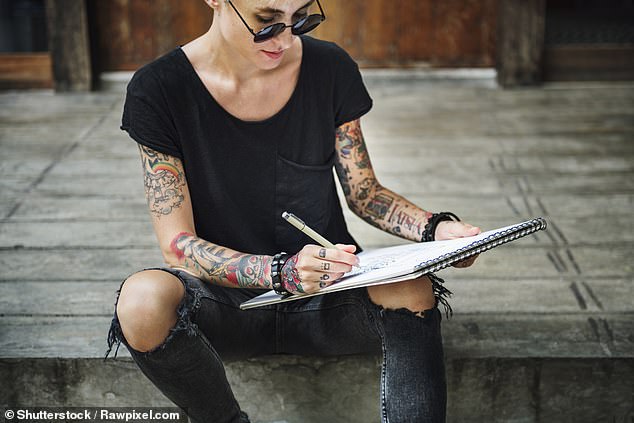 A study, which involved 751 women completing a creative task, while also filling in a form to show their level of arousal, was carried out in Poland by experts from SWPS University of Social Sciences and Humanities in Warsaw. Stock image

Why ovulation is ‘invisible’ in humans

Competition for mates between prehistoric human women may have contributed to ‘concealed ovulation’ – a lack of any notable physical clues that a woman is fertile, experts say.

Using computational models, US researchers found evidence that concealed ovulation in humans – which is generally unusual in the animal kingdom – evolved to allow women to hide their fertility status from other females.

This would have helped avoid female conflict, perhaps driven by aggression towards potential rivals for male mates.

Previously, scientists have thought women evolved to conceal ovulation from males to encourage them to help with looking after children.

The new research shows that the origin of concealed ovulation might have actually have been much more female-oriented than previously thought.

She said the findings may be due to women’s motivation being enhanced during this time, as previous studies have found, or because they take more risks.

An increased level of estradiol – the predominant form of oestrogen during the reproductive years – is associated with elevated dopamine release in the brain.

‘Sexual hormones are a kind of mood enhancer then, and a positive mood affects the flexibility of thinking,’ said Dr Galasinska.

‘Also, women feel more courageous and powerful, so they sometimes engage in risky situations during the phase near ovulation.

‘To be creative, we have to take a risk a little bit, as creativity requires breaking through patterns and mental blocks.’

Dr Galasinska said the results were positive for women, who could learn to use their cycles to their advantage.

‘So the thing I would like women to be aware of is that during the whole time around ovulation,’ she said.

‘When oestrogen increases (and before it drops), our physiological processes are our allies and keep us high.’

‘Maybe this is the time to arrange the most important issues related to participation in development-oriented projects, or just to create something.

‘The remaining time of the cycle therefore seems to be better for evaluation and a critical look at what has been done.’

The findings have been published in the International Journal of Environmental Research and Public Health. 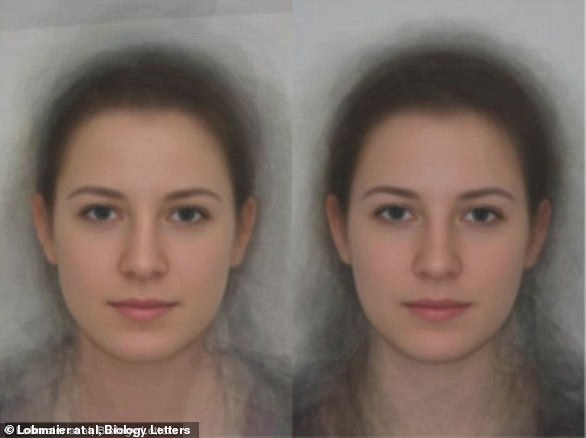 Experiments have shown that women can spot ovulating females by looking at their faces. They were shown pairs of faces (composites pictured) to choose the more attractive and most threatening in terms of luring a date away. A composite ‘fertile’ face is shown left and composite ‘less fertile’ face, right

Experiments in 2016 demonstrated that women can also spot ovulating females simply by looking at their faces.

And it’s thought this ‘skill’ could help females keep hold of their partners.

In fact, females have been reported to dance, walk, sound, smell and look more attractive during their most fertile days.

Men’s ability to recognise signs of fertility is of benefit to them because it boosts their chances of passing on their genes.

While some experts believe there’s no benefit for women being able to pick up on each other’s ovulatory cues, others say it is useful when it comes to competing for men.

Researchers at the University of Bern, Switzerland, set up experiments to explore how fertile and non-fertile women interact.

They hypothesised that ovulating women may be perceived to pose a reproductive threat and lure men away from their partners.

In an online study, 160 women were shown pairs of pictures where one image was generated when a woman was at her most fertile and another in the less fertile phase of the cycle.

Participants were asked to indicate which face they found more attractive.

Another experiment in a laboratory conducted the same test with 60 women.

In addition to choosing the more attractive face, these participants were asked which woman would be more likely to steal their own date.

Blood tests were taken to record the women’s hormone levels.

Both experiments showed that unlike men, women found neither the ‘fertile’ or ‘less fertile’ faces more attractive than one another.

This was a surprise to the researchers who expected women to find the faces of their fertile peers more attractive.

But ‘naturally cycling’ women with higher oestradiol levels who were not on the pill, were more likely to choose the fertile face as one of a woman who would entice her date away.

‘These results imply a role of oestradiol [a type of oestrogen produced in the ovaries] when evaluating other women who are competing for reproduction,’ the study, published in the Royal Society’s Journal, Biology Letters says.

The finding is in line with studies finding positive associations between oestradiol levels and competitive behaviour among women, such as greater emotional reaction to sexual infidelity.

‘Our data suggest that in women oestrogen is more related to intra-sexual competition than testosterone,’ the scientists write.