Blundering NHS doctors are leaving tampons and surgical swabs inside women for up to FIVE DAYS after they give birth, report reveals

Women are being left in severe pain because medical staff keep leaving swabs and tampons in their vaginas after childbirth, investigators have warned.

A report revealed NHS maternity departments are blighted by the errors and are struggling to stop them happening.

Between April 2015 and March 2018 vaginal swabs were left inside patients on 91 occasions, making up more than a quarter of all ‘retained foreign objects’.

The NHS regards the mistake as a ‘Never Event’ which are mistakes which should never be made.

Experts said there is too much room for error in the processes staff go through to remind themselves to remove the dressings.

Surgical tampons are much larger than normal ones (pictured, bottom versus top) and are supposed to be removed when a procedure is finished. Leaving them in can have devastating consequences

A report by the Healthcare Safety Investigation Branch (HSIB) revealed the case of one new mother, known only as Christine.

Christine, 30, had a surgical tampon inserted after the birth of her first child and staff left it in for five days.

Surgical tampons are much larger than normal ones used for periods and should be removed at the end of a surgical procedure.

Christine was left in agony but couldn’t understand why.

Figures show 621 ‘never events’ occurred in NHS England hospitals between April 1, 2018 and July 31 this year – the equivalent of nine a week.

More than 200 patients had operations on the wrong part of their body, with two men being circumcised by mistake.

Six women had their ovaries removed in error, one patient had the wrong toe amputated, and another had the incorrect part of their colon removed.

Some even endured life-threatening errors, including being given ordinary air rather than pure oxygen or falling out of poorly secured windows.

Others were given overdoses of drugs like insulin, while some had feeding tubes put into their airways.

Rachel Power, chief executive of the Patients Association, said: ‘People who suffer harm because of mistakes can suffer serious physical and psychological effects for the rest of their lives, and that should never happen to anyone who seeks treatment from the NHS.’

She saw a community midwife and her GP twice before returning to hospital where a doctor picked up on the problem.

‘Although measures have been put in place to reduce the chance of swabs and tampons being left in, it continues to happen,’ said the HSIB’s Sandy Lewis.

Ms Lewis is the director of a maternity investigation programme at the HSIB and said the mistakes ‘leave women in pain and distress’.

‘There are numerous physical effects; pain, bleeding and possible infection, but we can’t forget about the psychological impact as there was in Christine’s case,’ Ms Lewis said.

‘She had to seek private counselling and felt that what happened affected her ability to bond with her baby.

‘Retained vaginal swabs and tampons are a well-recognised issue and our investigation helps to shine a light on the risks.’

At the Trust where the case study, Christine, was treated, inspectors found there were 17 different tasks related to monitoring where swabs/tampons were used.

The more steps there are to a process, the more opportunity there is for people to make mistakes the HSIB said.

Its report also suggested that the dressings should be redesigned because they turn red and look similar to human flesh when they’re soaked in blood.

It said the NHS is ‘exploring potential solutions’ in this area.

Elizabeth Duff, senior adviser at the National Childbirth Trust, said: ‘Overstretched maternity staff, lack of time to hand over care between shifts and confusion about who takes responsibility are all factors which could contribute to a never event. 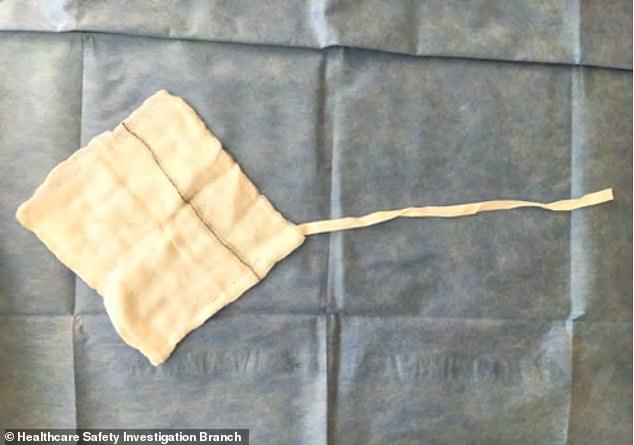 Experts said the fact that absorbent dressings, such as this swab, turn red when they soak up blood can make them difficult to distinguish from human flesh. They should be redesigned to overcome this problem, the HSIB said

‘It’s completely unacceptable that these events are taking place at all and that new mothers are being caused unnecessary pain and put at risk of infection.

‘The story of Christine is very distressing. In the first week of her baby’s life, she had seven contacts with different healthcare services, reporting ever-increasing pain following a forceps birth.

‘This had a huge impact on her including how she bonded with her baby. There’s no question that joined-up postnatal care is better for mother and better for baby.’