The Fifty Shades trilogy made its author E L JAMES a multimillionaire – and inspired British women to rediscover their sexuality. Elizabeth Day meets the queen of the sex scene

‘As a middle-aged woman, I am invisible. and I love that’

A few years ago, Erika Leonard called up her local car dealership. She was not in the market for a new vehicle. Instead, she had a specific purpose in mind. She introduced herself as a romantic novelist to the man in sales and said she needed to know the answer to a particularly urgent question.

Curiosity sated, Erika put down the phone and returned to her laptop in her West London study. She tried removing the sex scene between her protagonist Christian Grey and his romantic conquest Anastasia Steele that took place in his glossy black Audi R8. But it didn’t quite work. Erika wasn’t satisfied. She knew her readers wouldn’t be either. She wanted that sex scene in the book. So Erika took matters into her own hands. A few days later, she went to the West London Audi garage in person, ‘and there was a beautiful black R8 on display and I said, “Can I just get in the car?” So I sat in it and said, “You could totally have sex in here. There’s enough room.” Then I went back and rewrote it.’ 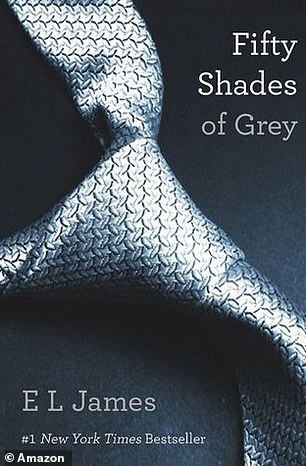 ‘I got to the stage where I had two teenage boys and a husband who were just doing their own things,’ she says now. ‘And I was slogging away working in telly. I thought, “Is this it?” and I suddenly found this passion.’

Fifty Shades was originally self-published. It struck a chord with women around the world, many of whom took advantage of the new ebook reader trend to lose themselves in breathless renditions of kinky sex without anyone on the morning commute being any the wiser. Soon broadsheet newspapers were publishing articles entitled ‘Why Does Fifty Shades of Grey Turn British Women On?’ and various academics were wheeled out to talk earnestly about how Erika (under the pen name E L James) had made it permissible for women to indulge their sexual imaginations without shame.

By August 2012, the book was more popular than The Highway Code, shifting 5.3 million copies in its first year and becoming the UK’s fastest-selling paperback of all time. Demand was so high in America that it caused paper shortages and lumber mills in Canada started rehiring laid-off workers. The two sequels – Fifty Shades Darker and Fifty Shades Freed – continued to explore the relationship between Christian, a businessman with a taste for BDSM (bondage, dominance, sadism and masochism – and, yes, I had to look that up) and Ana, a college graduate. Combined, they sold more than 125 million copies worldwide and were adapted into a highly successful film franchise starring Jamie Dornan and Dakota Johnson.

That level of success would go to most people’s heads. Which is why it is such a pleasant surprise to walk into Erika’s agent’s office in Central London and find an entirely unaffected, grounded and nervous 56-year-old woman with dark hair neatly cut in a fringe, wearing an LK Bennett scarf. There is no hint of the diva about her.

I use the word ‘nervous’ because it’s almost the first thing Erika says to me. She has just published a new novel, The Mister, and it’s nothing to do with Fifty Shades so she’s hoping that she’s done her fans proud and that they’ll like it. ‘I’m full of self-doubt,’ she admits. ‘Self-doubt is my middle name. I probably need to go and see someone about it, to be honest.’ Does she have self-doubt about her writing specifically? ‘Everything,’ Erika bats back. ‘And it’s stupid carrying around all that and I don’t know what to do about it.’ 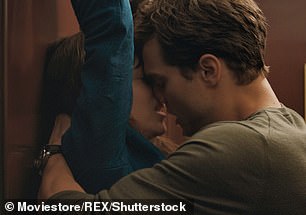 Although Fifty Shades made her a multimillionaire, critics were scathing about its literary merits. Salman Rushdie commented unkindly that: ‘It made Twilight look like War and Peace.’ Does she care, I wonder, that she will never win the Booker Prize? ‘I have no problem with never winning the Booker Prize,’ she says. ‘You know, Fifty Shades sold a ridiculous amount of books, which meant that my publishers could buy [other] literary manuscripts. So that makes me feel good as well.’

The Mister is a rollicking tale of romantic intrigue that whisks the reader from Chelsea to Cornwall via Albania and has an unexpected storyline incorporating everything from sex trafficking to clay pigeon shooting and Korean house music. The protagonist is Maxim, a devilishly handsome part-time model, DJ and photographer, who also just so happens to have inherited an aristocratic title and vast swathes of property around the country. His path crosses with Alessia Demachi, an enigmatic young woman who has fled an unhappy past. She is making a living in London as a cleaner, and along with the sex (impressively written with a great deal of detail about what goes where) Erika also seems to know exactly what goes into the life of a daily.

Does she have a cleaner? ‘Who doesn’t?’ she giggles. ‘My cleaner is Polish and she’s amazing. Before her I had one for 15 years who left me only two years ago. I used to live in a place in Brentford and, you know, this stuff all happened.’ She flaps her hands embarrassedly and I take it that she is referring to the stellar success of her books. ‘And then two years later [my cleaner] comes in and she’s holding my book and she says [adopting a tone of utter incredulity]: “This? You?” And I went, “Yeah.”’

She still cherishes her relative anonymity. Working on the Fifty Shades film franchise (Erika was producer on all three movies) was exhausting for various reasons, partly because of the high-profile nature of the project. She had a fractious relationship with the director of Fifty Shades of Grey, Sam Taylor-Johnson. Erika’s contract requests reportedly included approval over director, writer, cast, trailers and screenplay – almost unprecedented in Hollywood at the time, but which Erika says was only because she cared so much about not disappointing her fans.

‘Hollywood is tough,’ she admits. ‘The first movie was a huge challenge and the director had very, very, definite ideas of what this should be. And it wasn’t particularly Fifty Shades of Grey. It was something else… So that was difficult.’ Taylor-Johnson was replaced as director for the next two movies, which scored higher audience satisfaction scores in test screenings, ‘and that’s all I’m going to say about that’, Erika concludes crisply. 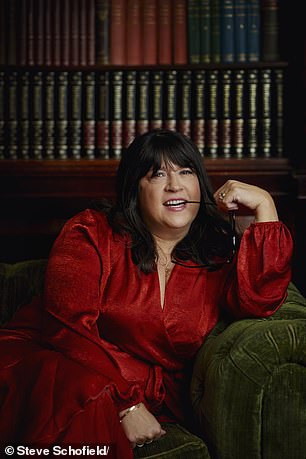 The level of attention paid to both the films and the books is partly why Erika does very few interviews. She still lives in West London with her husband, screenwriter Niall Leonard, and relishes her anonymity. ‘I think I found it very difficult to deal with all the navel-gazing about Fifty Shades. It’s just a book, people! It’s fantasy. I just don’t like putting myself out there… I do not want to be famous. As a middle-aged, overweight woman, I am invisible, and I love that. I can go into Marks & Spencer and do my thing and no one is going to pay a blind bit of notice.’

As a child, Erika remembers having an overactive imagination. She grew up in Buckinghamshire with one elder brother. Her father was originally from Scotland and a BBC cameraman while her mother is Chilean. One of Erika’s vivid childhood memories is of taking her Sindy doll and putting it into compromising positions with her brother’s Action Man.

How much of her passionate nature does she think stems from her Chilean roots? ‘Quite a lot, I think. My mother was very different. She’s always been this crazy ball of energy. She’s an extraordinarily strong woman and very angry most of the time. She’s a few shades of f**ked up, bless her. She had a very difficult childhood. But, yeah, I think there’s a lot of her drive in me as well… I’ve inherited a lot of her hot-headed Latin American traits, I think.’

When I ask her how her life has changed since accumulating a net worth of more than £70 million (according to Forbes magazine in 2013), she replies that her first extravagant purchase was a Volkswagen Touareg 4×4. Come on, there must be more?

‘Well, I can buy Dolce & Gabbana shoes now. I don’t have to get up every morning and go out and drive round the M25 to work… I have a lovely beach house in Cornwall. I’ve got a place in LA. Yeah. What can I say? I travel at the front of the plane.’ She breaks off and reveals that her mother, Alexandra, has Alzheimer’s. (Her father died in 2002.) ‘It means I’m able to look after my mother properly, you know, with 24/7 care at home. So that’s great.’ 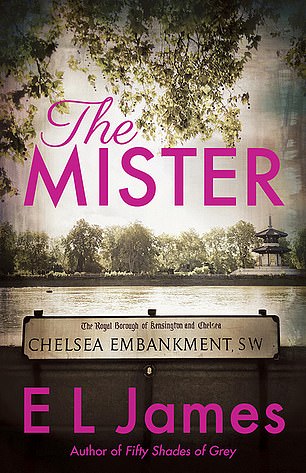 And then there’s the fact that Erika still gets thousands of emails every year from her predominantly female readers wanting to thank her for changing their attitudes towards sex. She starts crying when she tells me about one of them, from a woman who had experienced horrific abuse as a child: ‘She wrote to me and said, “You have no idea what this has meant to me because I can see how Christian has healed and how he has found his own redemption and it’s helped me to find mine.”’ Erika reaches for the tissues. ‘Sorry,’ she says as she dabs at her eyes.

It’s certainly true that, in the eight years since she was first published, the sexual landscape has changed dramatically. We live in a far more open, gender-fluid age and Erika is proud to have been part of a cultural shift in how openly we now talk about sex.

‘What I think the books did is allow women to have a bit of a giggle and then to talk about it with their friends. It sort of prompted a conversation. And, you know, women do like sex. If it’s done well.’

Would she ever consider writing a lesbian protagonist? ‘Never say never.’ And then, almost in the same breath, she adds: ‘Oh, I’ve got a story!’ What? One came into her head just then as we were talking? ‘Yes!’ I tell her I’ll be happy to take the appropriate cut of the royalties when the time comes and she laughs. No, Erika, I want to say. I’m deadly serious.

Apparently the key to writing a convincing sex scene is ‘choreography. It’s all about geography. So, you have to go, “We’re going to get from here to here…” Because if you’re asking, “But when did he take her knickers off?” that’s probably something that will pull you out of the scene.’

When she started writing Fifty Shades, she used to ask her husband Niall to try out positions with her on the floor of her study while fully clothed. ‘It was hilarious. He is very, very funny.’ The couple, who have been married since 1987, have two sons, aged 24 and 22, who are referred to only as ‘Major and Minor’ in the acknowledgements for The Mister.

‘I keep them out of this totally,’ Erika explains. ‘They’re their own people.’ What do her sons think of her being the poster-girl for empowered female sexuality? ‘They are incredibly proud of me [and] they’re slightly embarrassed.’