If you’re a woman who wants to lift weights at the gym but are too scared to leave the treadmill, you aren’t alone.

Women are avoiding the dumbbells because they feel intimidated by men, according to research.

Dubbed ‘gymtimidation’ a few years ago, problems addressed by women include being ogled as they work out and having to use equipment that isn’t suitable for the female physique.

It leaves women fleeing the gym after an unsatisfying workout, or having to go during quiet times.

Interviewees’ comments in the study echo those of pop star Ellie Goulding who revealed she finds it distressing that men watch her in the gym with a ‘smug smile’.

Women are avoiding lifting weights in the gym because they feel ‘intimidated’ by men, according to research. Pictured, Ellie Goulding with a trainer. The pop star said in 2015 that she finds it distressing that men watch her in the gym with a ‘smug smile’

Goulding said she hates men staring at her in the gym and judging her for exercising.

In an interview with Women’s Health magazine in 2015, she said: ‘The men stop what they are doing and look at you with a smug smile and that bums me out so much.

‘But I won’t stop. I won’t stop running up and down that thing just because they are staring at me as if what I’m doing is out of the ordinary or unladylike. F*** that.’

It’s been four years since Ellie Goulding’s comments – but the issue still stands, according to Dr Luke Turnock, a researcher at the University of Winchester.

Dr Turnock, who interviewed 25 women who go to the gym for his study, said he has seen women going into the weights area, taking equipment and immediately leaving to work out somewhere more private.

He said: ‘One of the primary issues identified was a feeling of intimidation when using certain areas or equipment.

‘Crossing the divide into the male space could be intimidating, and the majority of women, even those who were themselves comfortable in other areas of the gym, commented on this issue.’

‘It seems to be a common feature to the majority of commercial gyms today,’ he added.

Dr Turnock and his PhD student, Maria Moxey, investigated the phenomenon by interviewing 25 women who used gyms in London, Cardiff and the West Country.

Some admitted they felt uncomfortable going from the cardio area to the weights section because men spoke about them. 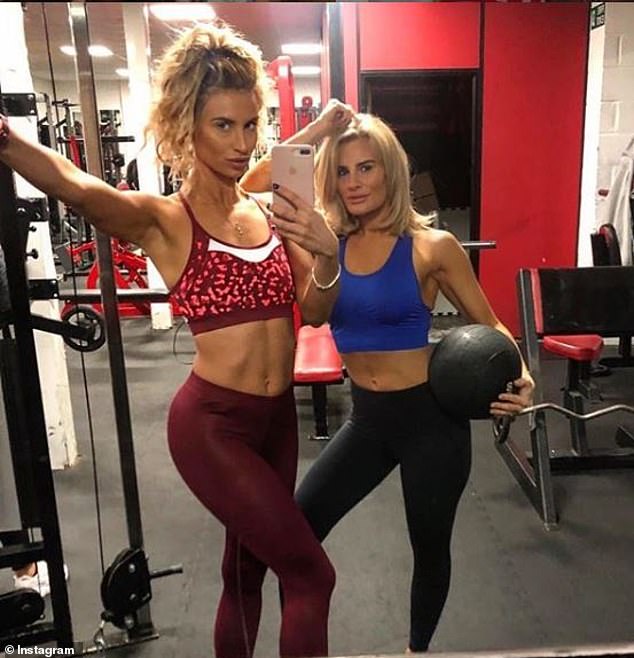 Dr Luke Turnock, of the University of Winchester, said he has observed women going into the weights area, taking equipment and immediately leaving to workout somewhere more private. Pictured, celebrities Ferne McCann and Danielle Armstrong in the weights area

‘It is very obvious to me that they are young male gym users talking about me, and they make me uncomfortable.

‘When they are in a group, they become overly confident, and they make comments and laugh about it – they will be quite perverse.’

A 19-year-old female gym staff member said: ‘Being a girl and going downstairs with the free weights, I feel like you get stared at, like “what are you doing here?” sometimes.’

A 22-year-old user complained: ‘There is nowhere to hide – with the weights section, there is just nowhere to go.

‘Everyone can see you, you are on show all of the time. A lot of them [weight sections] are completely mirrored.’ 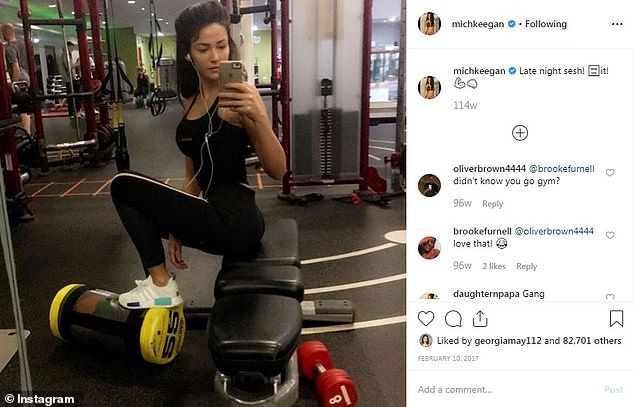 Dubbed ‘gymtimidation’, problems addressed by women include being ogled at as they workout. Pictured, actress Michelle Keegan working out in the gym 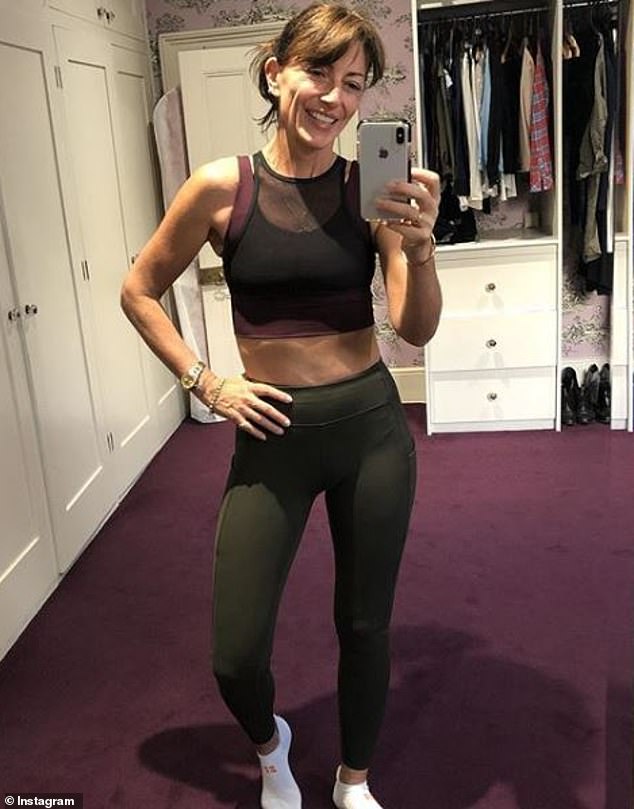 The study on 25 women found that women struggle to lift weights because the equipment isn’t suitable for the female physique. Pictured, TV presenter Davina McCall, who keeps active

‘If I want to use the weights downstairs, I come to the gym first thing in the morning when it is completely empty.’

One highlighted how, at just five foot one inch tall, it was ‘impossible for her to reach the collars if she wanted to use a barbell rack, effectively designating it as a piece of equipment for men’.

Dr Turnock said: ‘An observation I made related to a punching bag in the gym, where a single pair of gloves was provided, in size large.

‘Effectively, this designated the equipment as male only, since very few women will be able to wear large gloves.’

He said changes should be made to alter equipment layouts, so there was a less distinct feeling of a men’s and women’s area.

Dr Turnock added: ‘Many women commented on how better integration of equipment, and changes in structure, could help the atmosphere in gyms.’

She said: ‘I understand how difficult it is to walk into a gym and pick up some weights and just start training when the person doesn’t know how to train safely and effectively or is maybe self conscious.

‘Go into the gym with a plan so that you have something to follow and record what you did so you can make progress every session.’

Dr Turnock revealed his findings at the British Sociological Association’s annual conference in Glasgow this week.

WHY DO EXPERTS SAY WE SHOULD LIFT WEIGHTS?

If you want to up your odds of living a longer, healthier life, you might want to consider lifting weights as an abundance of research points to its positive affects on the body.

The NHS already recommends that people should try and do two sessions or more of muscle strengthening exercises a week, which includes lifting weights, cycling and yoga.

It helps with weight loss

Although a weight-training workout doesn’t typically burn as many calories as a cardio workout, it can build muscle which can help boost resting metabolism.

Research has shown that you burn more calories in the hours following a weight training session, with a 2002 University of Wisconsin study showing resting metabolism staying elevated for up to 38 hours.

Lifting weights for less than an hour each week slashes your stroke and heart attack by around 70 per cent, according to research by Iowa State University in 2018.

Experts also say carrying heavy shopping or digging for the same amount of time offers the same benefit after analysing the link between resistance exercise and cardiovascular disease in nearly 13,000 adults.

It could prevent diabetes

People who lift weights don’t just tone up their arms – they also have a lower risk of diseases such as diabetes, scientists say.

A team from the University of North Florida looked at more than 5,000 adults in the US who had been asked if they lifted weights.

They compared the responses to blood samples taken from the participants, to see if there was an association with metabolic syndrome.

People with at least three out of five risk factors are considered to have metabolic syndrome.

The researchers found people who lifted weights were 37 per cent less likely to suffer from the condition, and therefore were at less risk of diabetes and heart disease.

It improves muscles in the elderly

Experts say that it’s never too late to take up muscle-building workouts – and may even be most important for older people to work on strength training than it is for younger ones.

Nearly half of retired Americans have weak grip strength, which impairs their independence and even raises the risks of dying early by more than 50 percent, a University of Michigan study revealed in 2018.