Women in the arts and men in construction have the highest suicide risks, new CDC data show

Suicides have been on the rise in the US, increasing 34 percent between 2000 and 2016 – running parallel to increasing mental health issues and social and political tensions.

Suicide risk factors are complex, and vary by geographical location and gender as well as by occupation, but as work takes up about one third of an average American’s life, a person’s job is likely to have some bearing on their mental health.

The Centers for Disease Control and Prevention (CDC’s) latest numbers are a recount of previous data which suggested that farmers were the most vulnerable population in the US, which was not the case.

Now, women in public-facing professions and men in jobs that require physical labor may face the greatest risks of suicide, the new data suggest. 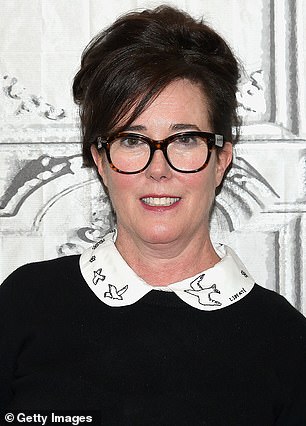 A new CDC report reveals construction workers have the highest suicide risk among men, while for women the risk is highest among those in public-facing, creative fields (such as the late fashion designer Kate Spade, pictured right)

Though there are important warning signs of suicidal thoughts to be aware of, there is no ‘type’ of person who may be suicidal – suicide affects people of all ages, races, genders and socioeconomic classes.

Yet, in the fight to prevent suicide, it is imperative to identify the risk factors that could fuel feelings of hopelessness.

In addition to a diagnosed mental health problem or substance abuse issues, stressors can certainly contribute to feelings of being overwhelmed with life.

And, particularly in the very work-centric US, our jobs are often chief among stressors.

In an effort to understand which workers might need better preventive are, the CDC analyzed data on suicide deaths in 17 states.

Suicide is significantly more common among men than among women, as has long been the case.

In both of the years the CDC examined, construction or extraction workers accounted for about 20 percent of suicide deaths among men – more than males in any other profession.

Overtime, suicides increased by 22 percent in this group as well.

As the US economy has moved away from one that stands on the shoulders of industries like construction, manufacturing and agriculture, there has been wide speculation that middle class men (particularly those who are white) may feel disenfranchised and left behind, which could in turn fuel depression.

Of course, these influences would be difficult to quantify at all, and impossible using the CDC’s basic data on suicide deaths.

The agency did offer that the ‘relationship between occupation and suicide might be confounded by access to lethal means on the job and socioeconomic factors such as lower income and education.’

The former – lethal means – seems unlikely to have bearing on the high rates of suicide among women in the arts, design, entertainment, sports and media industries.

Last year, the US was stunned by the suicide of hand bag mogul Kate Spade.

Spade had built a fashion empire from her internationally-known lines of hand bags and accessories, but she had long struggled with bipolar disorder and depression.

But it was her very success, her family suggested, that made her hesitant to seek help.

Spade, they said, feared that if the public found out about her struggles, it would hurt the reputation and value of her multi-billion dollar brand.

This need to maintain a certain image may contribute to the relatively high suicide rates among women in this set of public-facing professions.

Women working in high stress jobs like protective service and health care support jobs were also at the second and third most risk for suicide, according to the new report.

Men in creative fields were also at elevated risks for suicide, as were manual workers working in installation, maintenance and repairs.

‘Increasing suicide rates in the U S are a concerning trend that represent a tragedy for families and communities and impact the American workforce,’ said Dr Deb Houry, director, CDC National Center for Injury Prevention and Control.

‘Knowing who is at greater risk for suicide can help save lives through focused prevention efforts.’