Women have led anti-Taliban protesters in Afghanistan today as they waved national flags in defiance of the Islamists to mark their country’s independence day.

Female demonstrators took to the streets of Kabul waving the black, red and green flag which has become a symbol of defiance to the country’s new jihadist rulers.

They were joined by thousands across the country who celebrated the 1919 handover of power from the British by rejecting their new overlords.

The Taliban responded with beating and gunfire while tearing down flags, despite their pledge to be a ‘reformed’ and ‘moderate’ version of the brutal outfit which controlled Afghanistan in the 1990s. 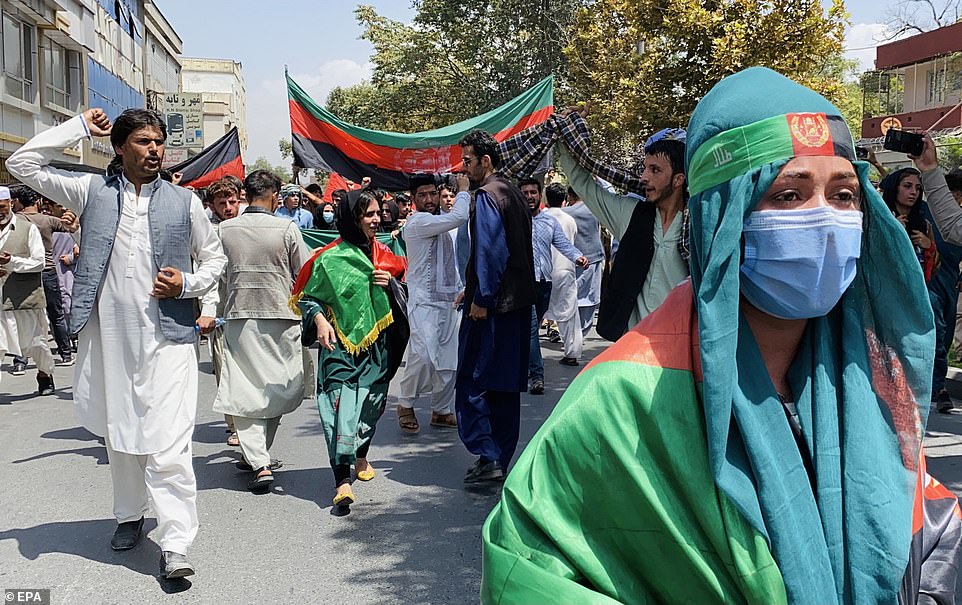 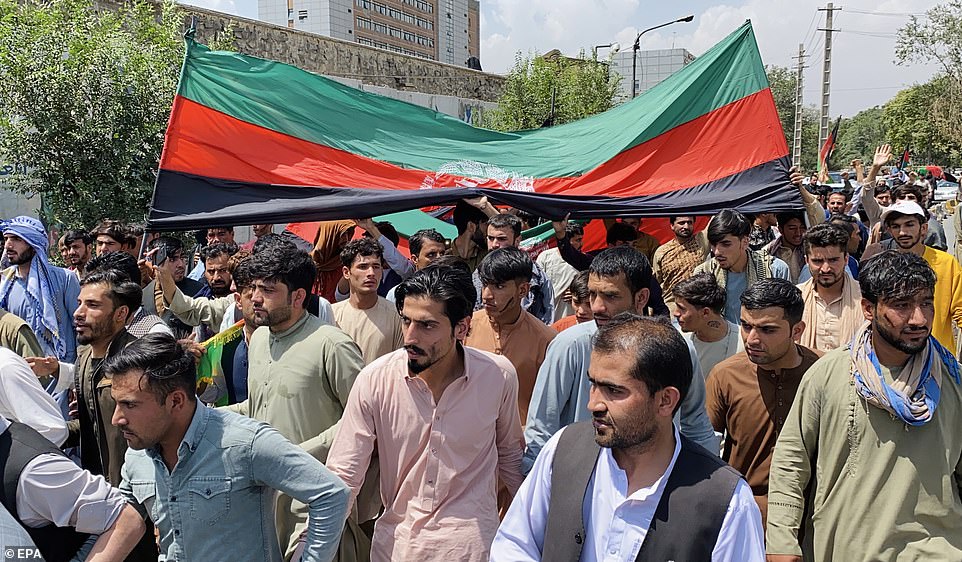 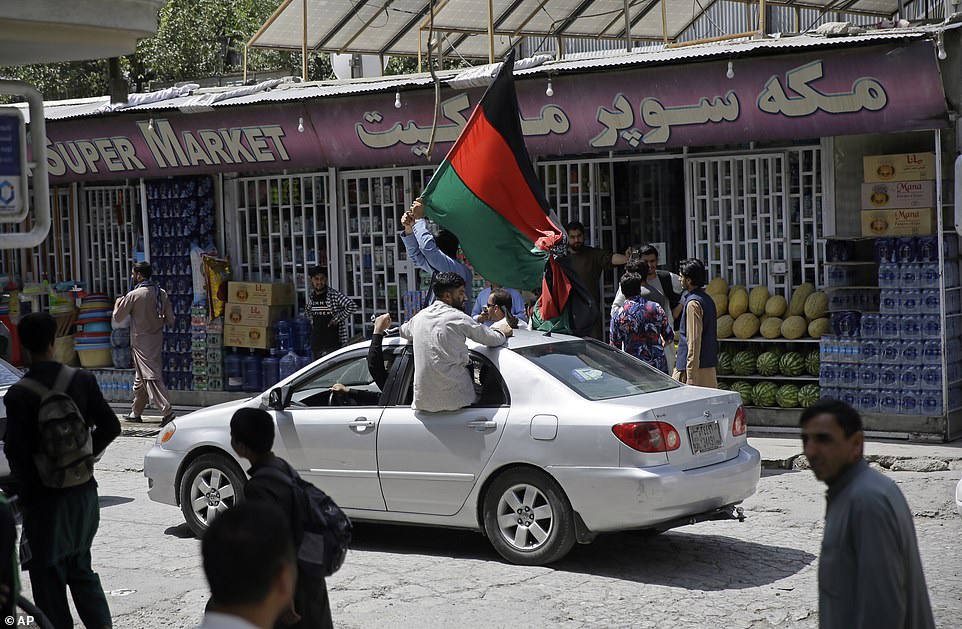 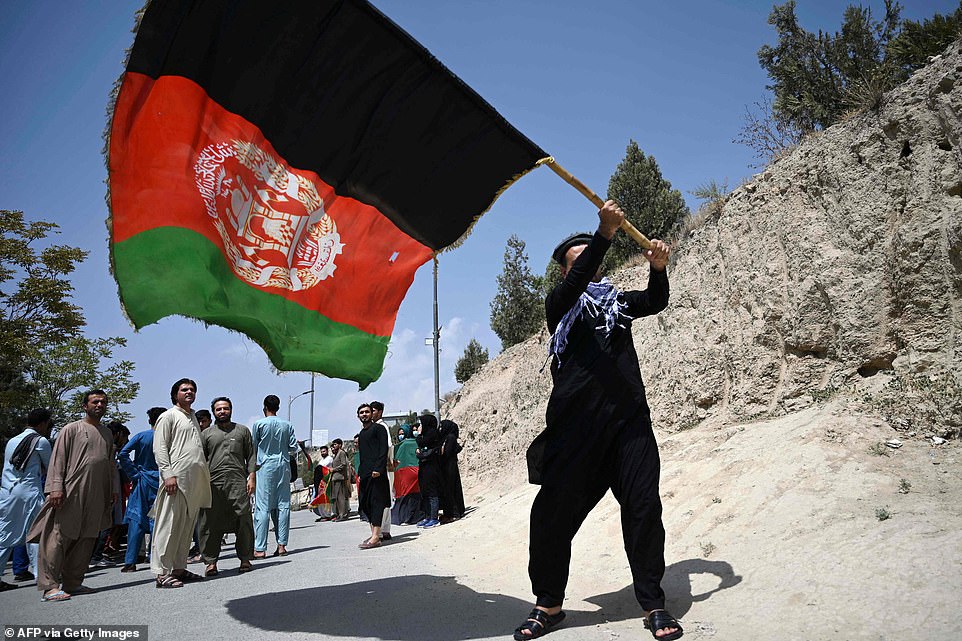 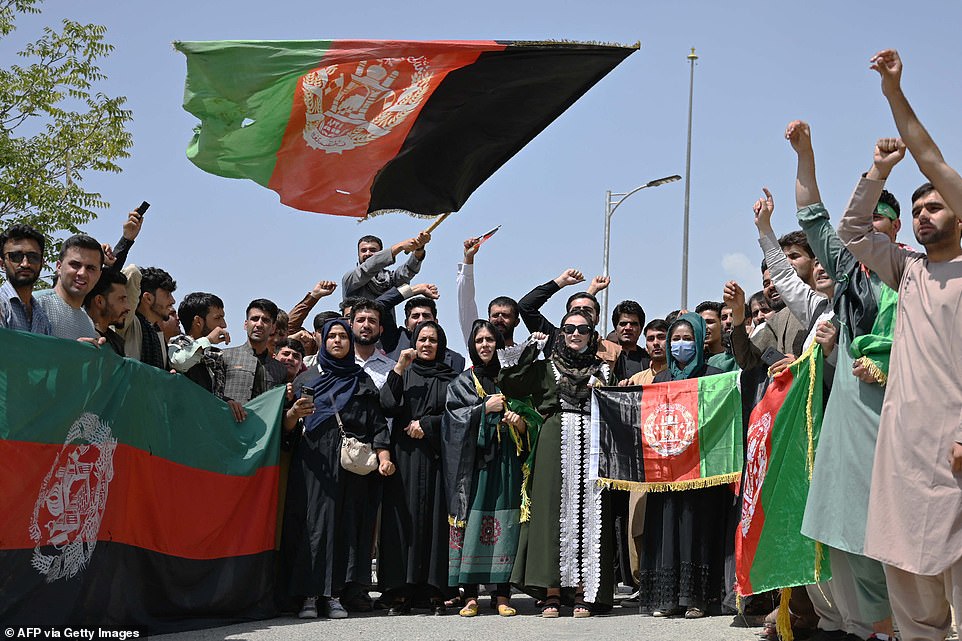 On Thursday, a procession of cars and people near Kabul’s airport carried long black, red and green banners in honor of the Afghan flag.

Protesters even went so far as to raise the flag in Abdul Haq Square in the capital, in a brazen show of resistance.

At another protest in Nangarhar province, video posted online showed a bleeding demonstrator with a gunshot wound. Onlookers tried to carry him away.

In Khost province, Taliban authorities instituted a 24-hour curfew Thursday after violently breaking up another protest, according to information obtained by journalists monitoring from abroad.

The authorities did not immediately acknowledge the demonstration or the curfew.

Protesters also took the streets in Kunar province, according to witnesses and social media videos that lined up with reporting by The Associated Press.

The demonstrations were a remarkable show of defiance after the Taliban fighters violently dispersed a protest Wednesday.

At that rally, in the eastern city of Jalalabad, demonstrators lowered the Taliban’s flag and replace it with Afghanistan’s tricolor.

Meanwhile, opposition figures gathering in the last area of the country not under Taliban rule talked of launching an armed resistance under the banner of the Northern Alliance, which allied with the U.S. during the 2001 invasion.

It was not clear how serious a threat they posed given that Taliban fighters overran nearly the entire country in a matter of days with little resistance from Afghan forces.

The Taliban so far have offered no specifics on how they will lead, other than to say they will be guided by Shariah, or Islamic, law.

They are in talks with senior officials of previous Afghan governments. But they face an increasingly precarious situation.

‘A humanitarian crisis of incredible proportions is unfolding before our eyes,’ warned Mary Ellen McGroarty, the head of the U.N.’s World Food Program in Afghanistan. 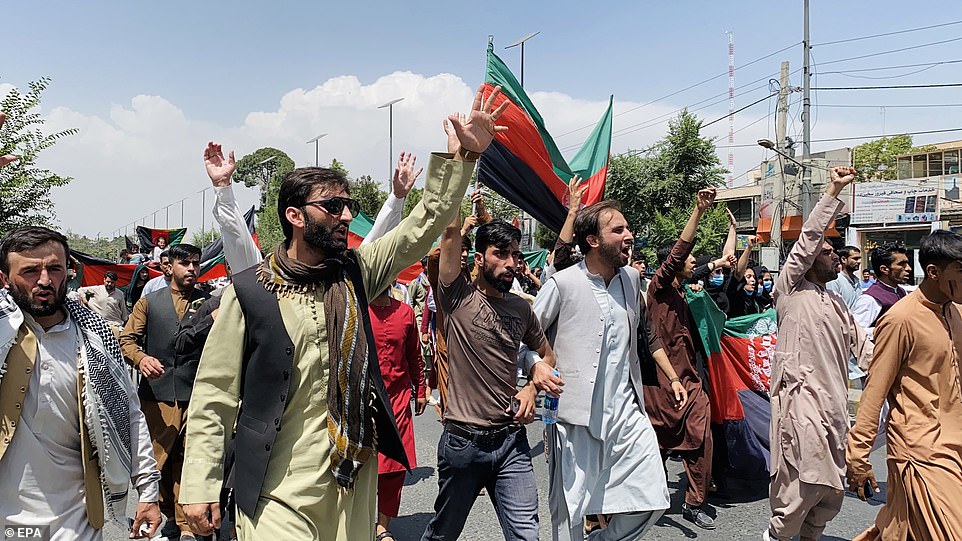 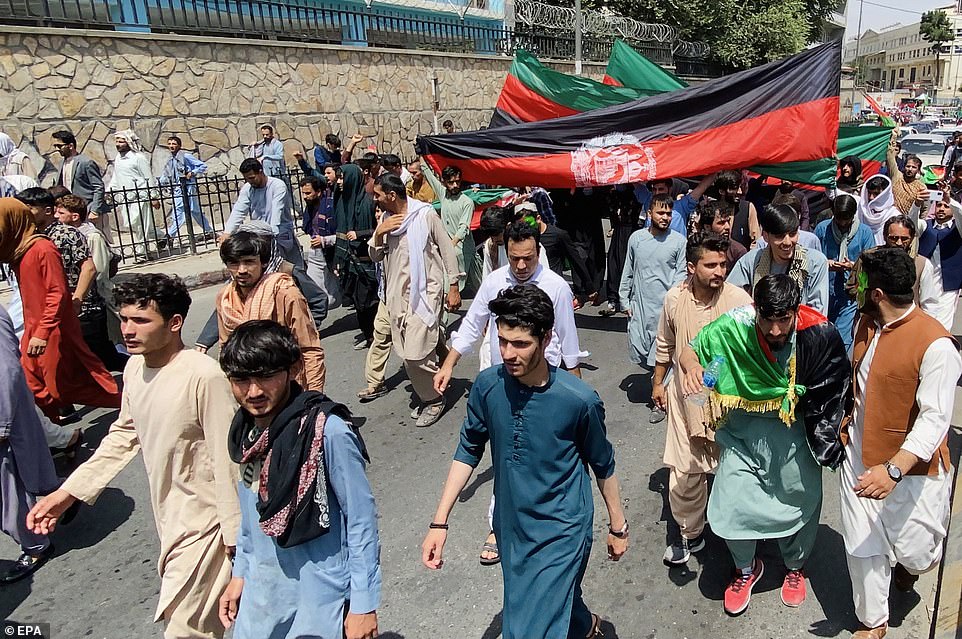 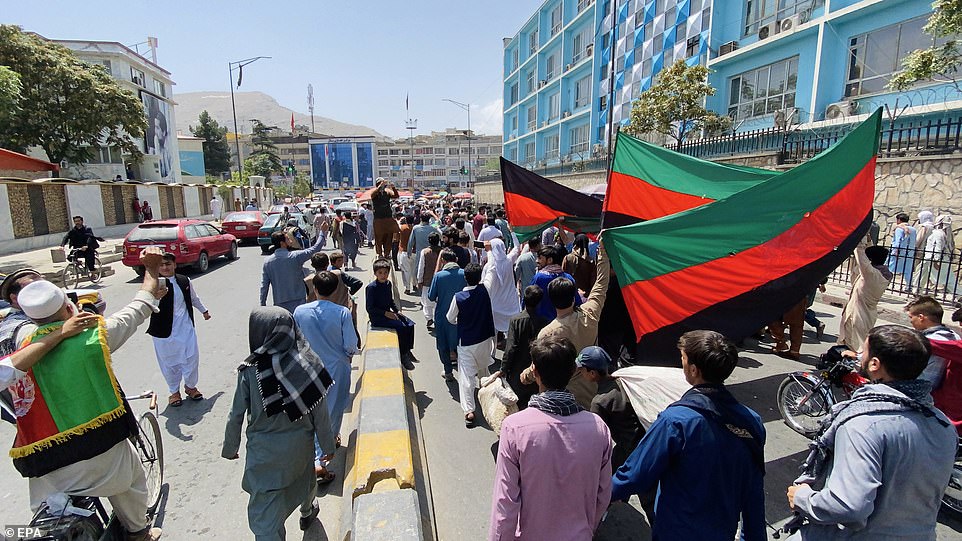 Beyond the difficulties of bringing in food to the landlocked nation dependent on imports, she said that drought has seen over 40 per cent of the country’s crop lost.

Many who fled the Taliban advance now live in parks and open spaces in Kabul.

‘This is really Afghanistan’s hour of greatest need, and we urge the international community to stand by the Afghan people at this time,’ she said.

Hafiz Ahmad, a shopkeeper in Kabul, said some food has flowed into the capital, but prices have gone up.

He hesitated to pass those costs onto his customers but said he had to.

‘It is better to have it,’ he said. ‘If there were nothing, then that would be even worse.’

Two of Afghanistan’s key border crossings with Pakistan, Torkham near Jalalabad and Chaman near Spin Boldak, are now open for trade.

However, traders still fear insecurity on the roads and confusion over customs duties that could push them to price their goods higher.

Amid that uncertainty and concerns that the Taliban will reimpose a brutal rule, which included largely confining women to their homes and holding public executions, many Afghans are trying to flee the country.

However, access to the airport remained difficult. On Thursday, Taliban militants fired into the air to try to control the crowds gathered at the airport’s blast walls.

Overnight, President Joe Biden said that he was committed to keeping U.S. troops in Afghanistan until every American is evacuated, even if that means maintaining a military presence there beyond his Aug. 31 deadline for withdrawal.

In an interview with ABC’s ‘Good Morning America’ aired Thursday, Biden said he didn’t believe the Taliban had changed.

‘I think they’re going through sort of an existential crisis about do they want to be recognized by the international community as being a legitimate government,’ Biden said. ‘I’m not sure they do.’ 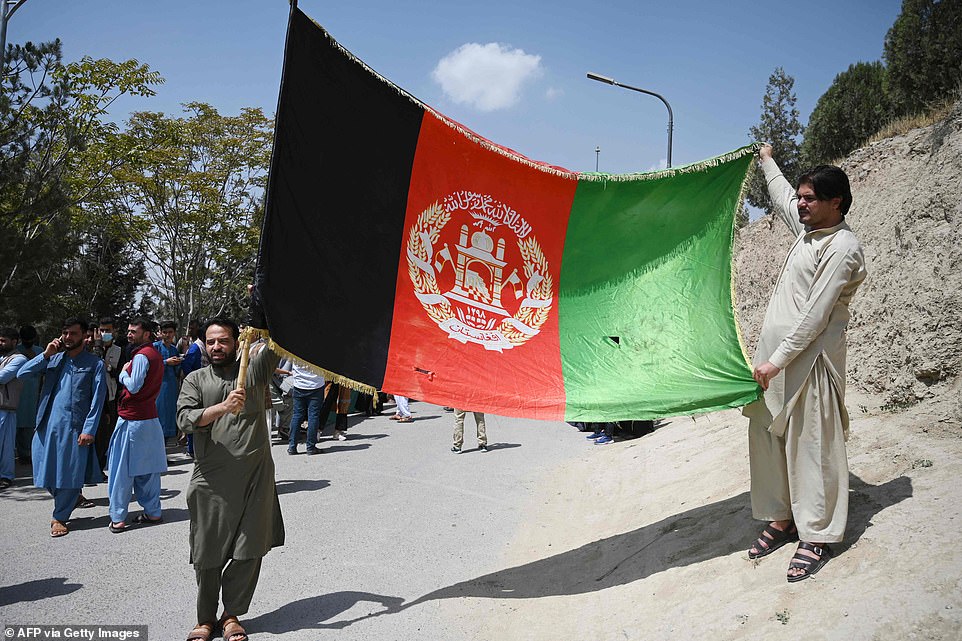 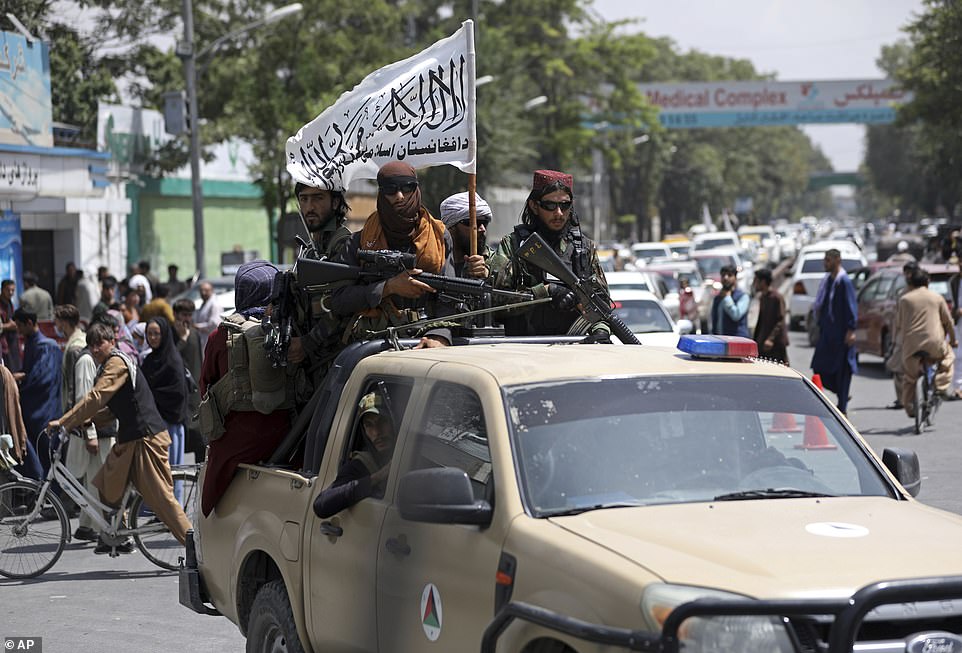 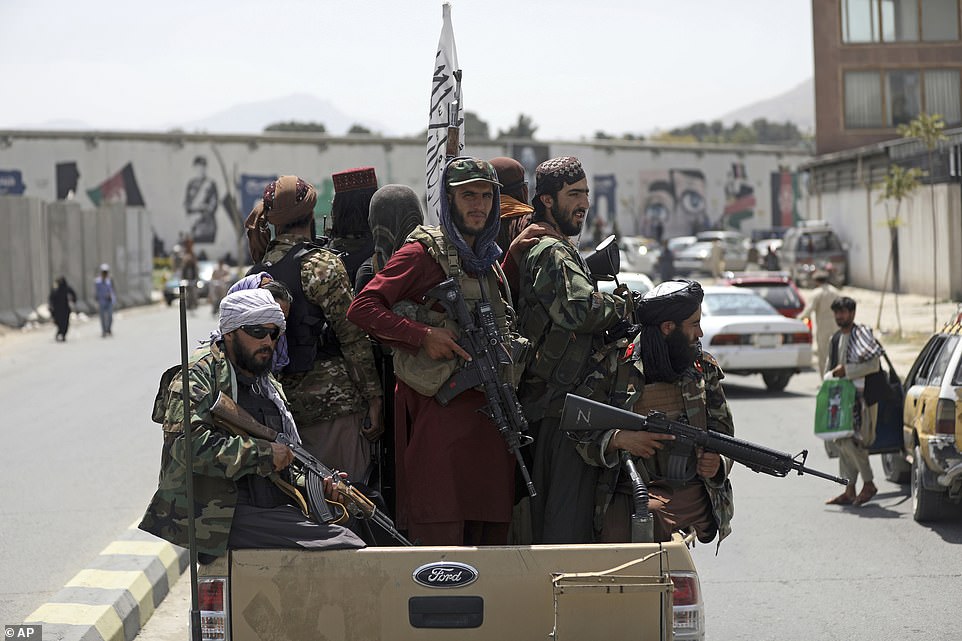 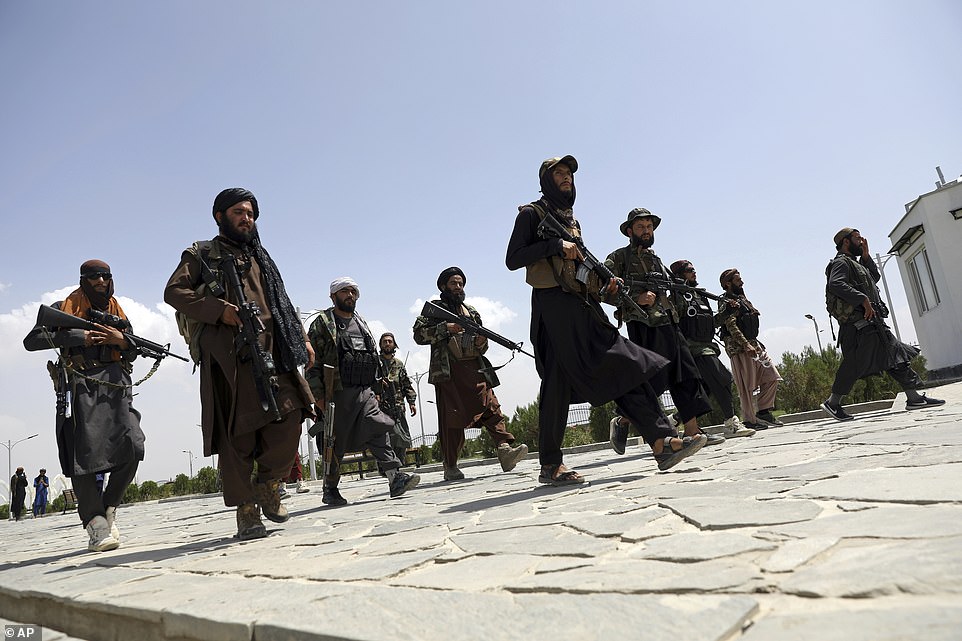 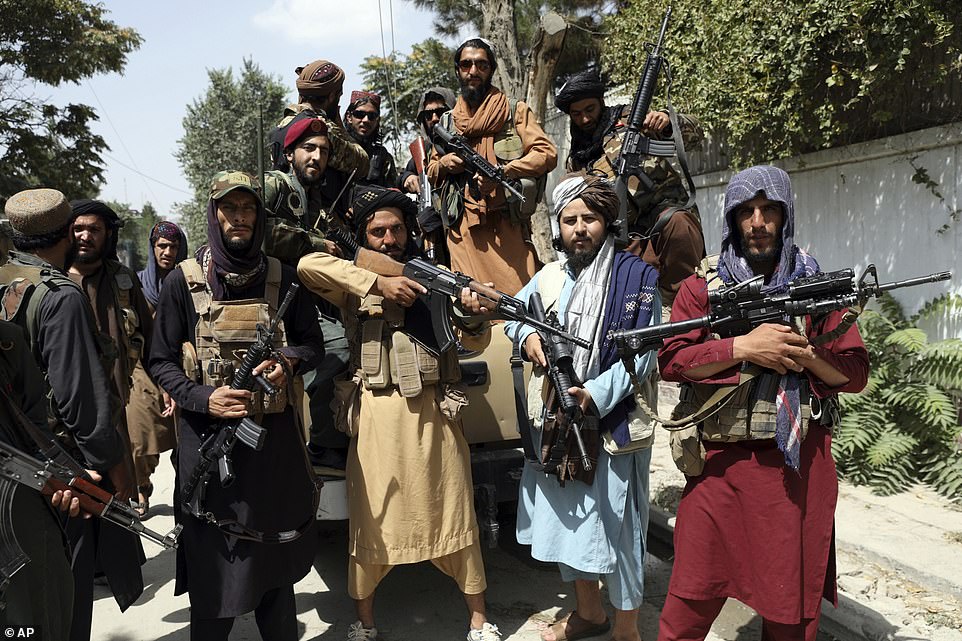 Indirectly acknowledging the resistance they face, the Taliban on Thursday asked preachers to urge congregants to remain in the country and counter ‘negative propaganda’ against them.

The Taliban have also urged people to return to work, but most government officials remain in hiding or are themselves attempting to flee.

The head of the country’s Central Bank warned that the supply of physical U.S. dollars is ‘close to zero,’ which will batter the currency, the afghani.

The U.S. has apparently frozen the country’s foreign reserves, and the International Monetary Fund cut off access to loans or other resources for now.

‘The afghani has been defended by literally planeloads of U.S. dollars landing in Kabul on a very regular basis, sometimes weekly,’ said Graeme Smith, a consultant researcher with the Overseas Development Institute.

‘If the Taliban don’t get cash infusions soon to defend the afghani, I think there’s a real risk of a currency devaluation that makes it hard to buy bread on the streets of Kabul for ordinary people.’

Still, Smith, who has written a book on Afghanistan, said the Taliban likely won’t ask for the same billions in international aid sought by the country’s fallen civilian government – large portions of which were siphoned off by corruption.

That could limit the power of the international community’s threat of sanctions.

‘You’re much more likely to see the Taliban positioning themselves as sort of gatekeepers to the international community as opposed to coming begging for billions of dollars,’ he said.

There has been no armed opposition to the Taliban.

But videos from the Panjshir Valley north of Kabul, a stronghold of the Northern Alliance militias that allied with the U.S. during the 2001 invasion of Afghanistan, appear to show potential opposition figures gathering there.

Those figures include members of the deposed government – Vice President Amrullah Saleh, who asserted on Twitter that he is the country’s rightful president.

In an opinion piece published by The Washington Post, Massoud asked for weapons and aid to fight the Taliban.

‘I write from the Panjshir Valley today, ready to follow in my father’s footsteps, with mujahideen fighters who are prepared to once again take on the Taliban,’ he wrote.