Protesters were once again on the streets of Dublin city centre today to highlight injustices in how rape trials are conducted in Ireland.

The resumed demonstration is a response to a recent case in Co Cork that sparked outrage after a defence barrister referred to the 17-year-old complainant’s underwear during a trial in which a 27-year-old man was acquitted of rape.

Activists wore revealing outfits to protest against the shaming of victims for their clothes and painted slogans such as ‘this is not consent’ and ‘I’m not asking for it’ on their bodies. 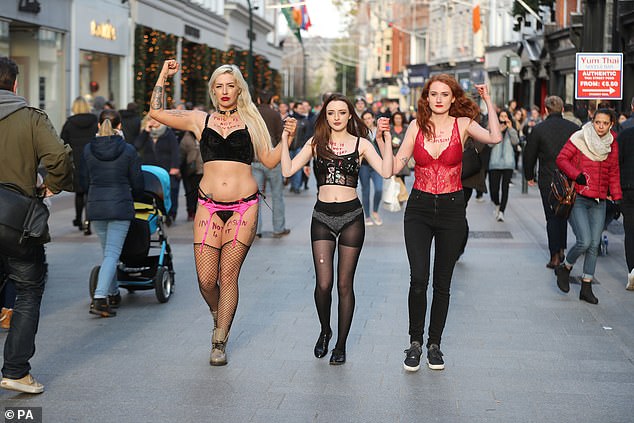 (Left to right) Protestors Stacie Ellen Murphy, Alanna Cassidy and Lena Seale launched a fresh protest today a week after the initial demonstration where feminists protested the result of a court case that saw a man, 27, acquitted of raping a 17-year-old in Cork 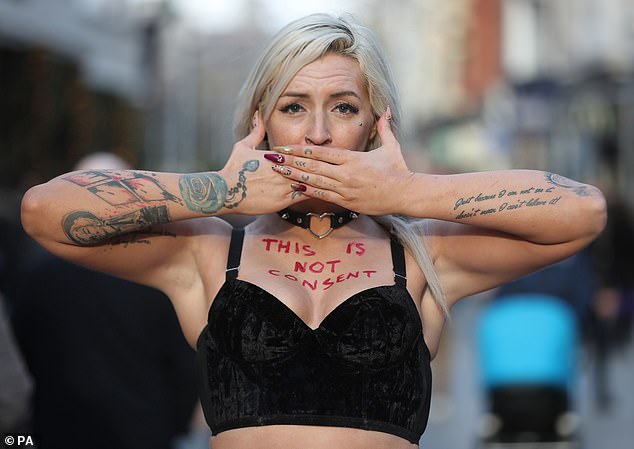 Since the not guilty verdict in the Cork rape trial, dozens of women have shared pictures of their underwear online under the hashtag #ThisIsNotConsent

The defendant’s lawyer suggested to jurors that the teenager’s lacy underwear meant she was ‘open to meeting someone and being with someone.’

The young woman’s thong was then passed around the courtroom, leading a female Irish MP to hold up a lace thong in parliament to highlight ‘routine victim-blaming’.

Today’s renewed protest follows on from last week’s mass demonstration organised by a number of feminist organisations, in which participants held up underwear and placards that read ‘Stop victim blaming in courts’ while chanting ‘Clothes are not consent’.

Since then, dozens of women have shared pictures of their underwear online under the hashtag #ThisIsNotConsent to express solidarity with the teenager in Cork and protest against the verdict. 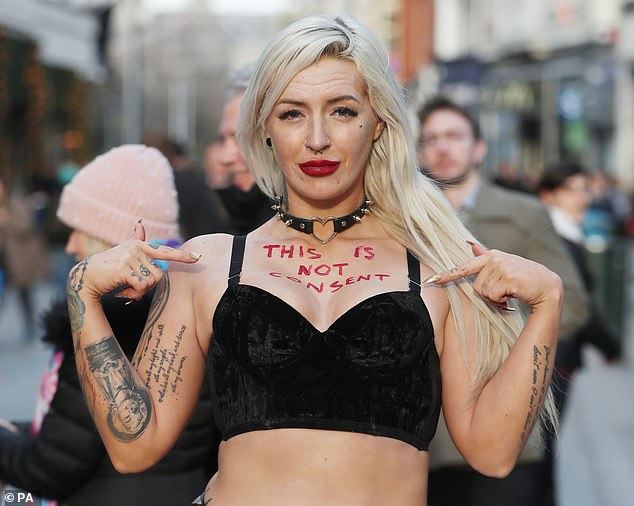 Protestor Stacie Ellen Murphy points to a slogan on her chest while protesting along Grafton Street, Dublin on Thursday 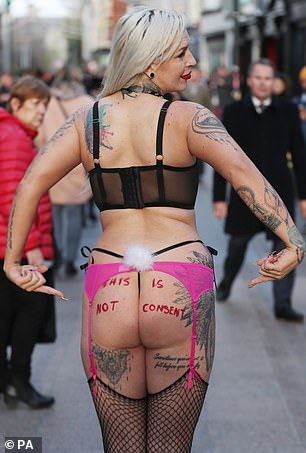 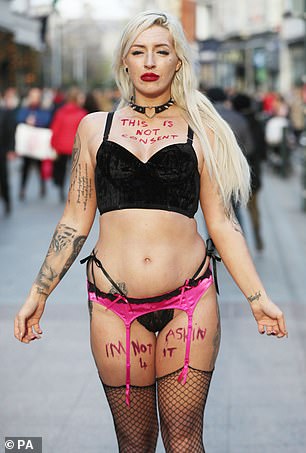 Protestor Stacie Ellen Murphy walks in her underwear along Grafton Street, Dublin, on Thursday in support of victims of sexual violence after a jury was given a 17-year-old’s underwear which was offered as proof that she was ‘open to meeting someone’ 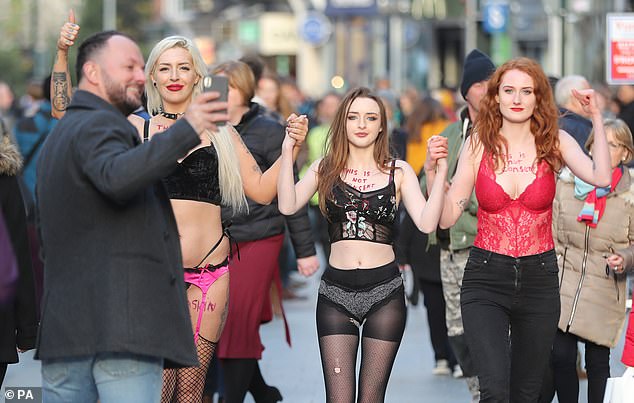 Meanwhile minister Ruth Coppinger held up a pair of frilly underwear in parliament.

She asked lawmakers: ‘Why is nothing yet being done to stop the routine use of rape myths in trials, and how concerned is this Government about the chilling effect this is having on victims coming forward?

‘It might seem embarrassing to show a pair of thongs here in this incongruous of the Dail. 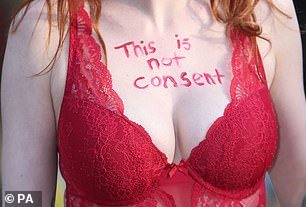 The #ThisIsNotConsent protest went viral online after the rape trial and was even used by minister Ruth Coppinger (pictured, Lena Seale at the Dublin protest today)

‘But the reason I’m doing it: how do you think a… woman feels at the incongruous setting of her underwear being shown in a court?

‘How heroic do you have to be to pursue a rape trial in this country?’

Tweeting about her decision afterward, she added: ‘I hear cameras cut away from me when I displayed this underwear in Dail.

‘In courts victims can have their underwear passed around as evidence and it’s within the rules, hence need to display in Dáil. #ThisIsNotConsent.’

The protests started in a private Facebook group called Mna na hEireann – meaning Women of Ireland – after the case concluded. 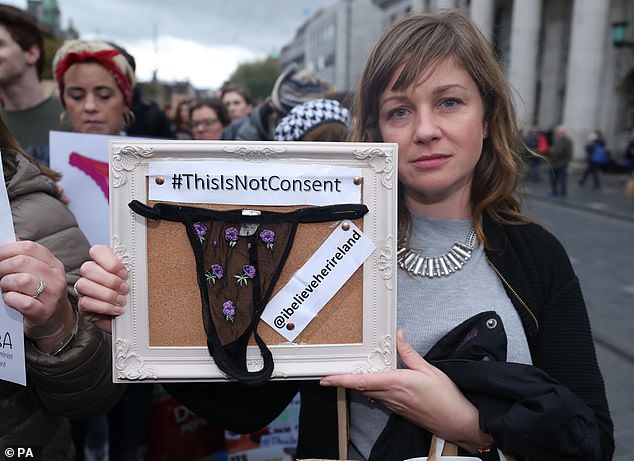 Hundreds of women marched in Dublin last Wednesday carrying banners with the hashtag ‘ThisIsNotConsent’ on them, after an online campaign started the movement 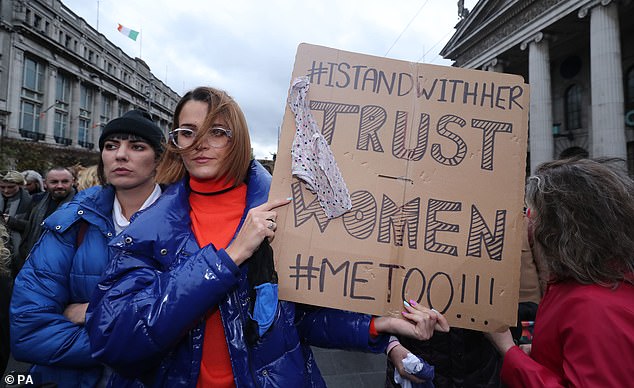 Women took to the streets across Ireland brandishing thongs, including in O’Connell Street in Dublin (pictured) 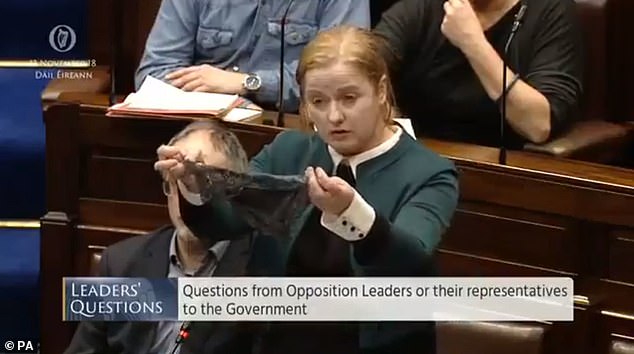 Minister Ruth Coppinger also held up a pair of pants in the Irish parliament, asking the Prime Minister: ‘How heroic do you have to be to pursue a rape trial in this country?’