Women rescued after voyage went from bad to worse

A planned voyage from Hawaii to Tahiti aboard a small sailboat didn’t start off well for two Honolulu women.

One of their cellphones washed overboard and sank into the deep blue water on their first day at sea.

From there, things got worse. Much worse. About a month into their trip, bad weather caused their engine to lose power.

Their mast was damaged. And then, as they drifted across thousands of miles of open ocean, their water purifier stopped working.

But the two sailors, accompanied by their dogs, were resourceful and prepared with more than a year’s worth of food, and after more than five months of being lost in the vast Pacific Ocean.

The pair sent out daily distress calls that no one heard, and they were rescued by the U.S. Navy on Wednesday about 900 miles southeast of Japan.

Their intended destination: Tahiti – thousands of miles off course. 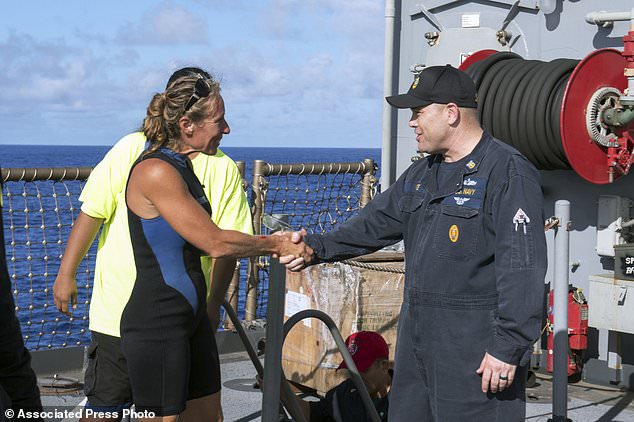 USS Ashland Command Master Chief Gary Wise welcomes aboard Jennifer Appel, an American mariner, one of two Honolulu women and their dogs who were rescued after being lost at sea for months 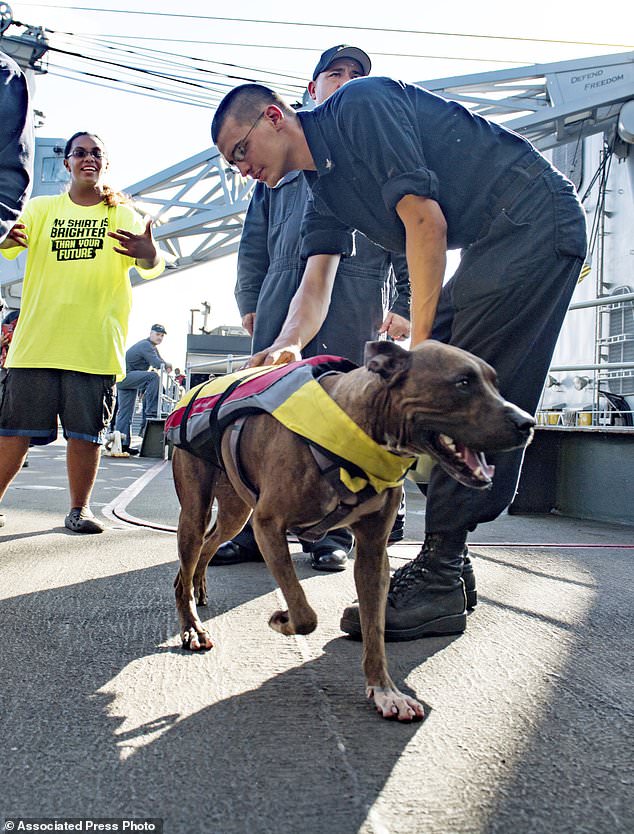 A sailor greets Zeus the dog with his owner Tasha Fuiaba, left, on the boat deck of the amphibious dock landing ship USS Ashland

The USS Ashland rescued the women after a Taiwanese fishing vessel spotted their crippled vessel Tuesday and alerted the U.S. Coast Guard, the Navy said in a statement released Thursday.

The women, identified by the Navy as Jennifer Appel and Tasha Fuiava, both of Honolulu, lost their engine in bad weather in late May but believed they could still reach Tahiti using their sails.

‘They saved our lives,’ said Appel through the Navy release. ‘The pride and smiles we had when we saw (U.S. Navy) on the horizon was pure relief.’

In a phone call with news media from the Ashland, Appel said they had sent a distress signal for 98 days with no response.

‘It was very depressing and very hopeless, but it’s the only thing you can do, so you do what you can do,’ she said, according to an audio recording of the call.

A group of sharks attacked their boat one night, and a single shark returned a day later, she said.

‘Both of them, we actually thought it was lights out, and they were horrific,’ Appel said. ‘We were just incredibly lucky that our hull was strong enough to withstand the onslaught.’ 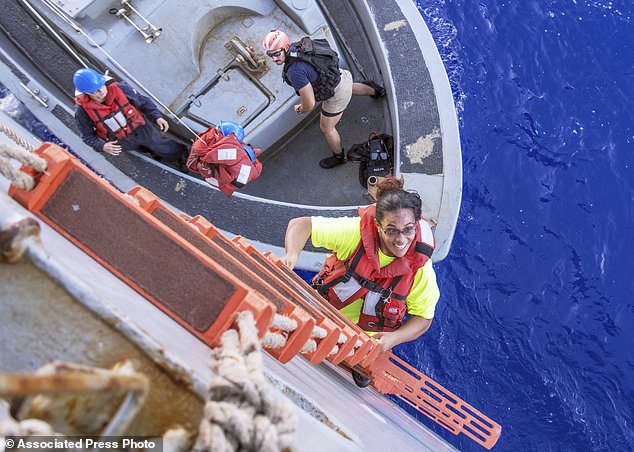 Tasha Fuiaba, an American mariner who had been sailing for five months on a damaged sailboat, climbs the accommodation ladder to board the amphibious dock landing ship USS Ashland

Asked if they ever thought they might not survive, she said they would not be human if they did not. She credited the two dogs, which she called their companion animals, with keeping their spirits up.

Appel’s mother told The Associated Press Thursday that she never gave up hope that her daughter would be found.

Joyce Appel, 75, who lives in Houston, said she got a call from her daughter early Thursday morning more than 5 months after they had last spoke.

She answered the phone as she always does, wondering who wanted to sell her something, when she heard her daughter’s voice on the other end of the line.

‘She said, ‘Mom?’ and I said, ‘Jennifer!?’ because I hadn’t heard from her in like five months,’ she said. ‘And she said ‘yes mom,’ and that was really exciting.’

Jennifer Appel departed on May 3, her mother said, but her phone was lost overboard the first day she was at sea, and she hadn’t heard from her daughter since. 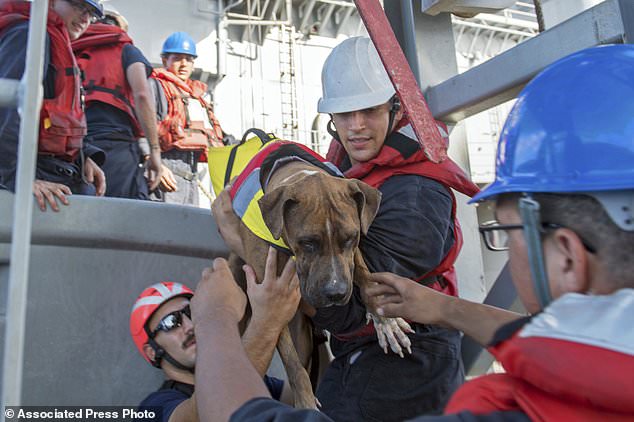 ‘Various things on her boat broke, the mast broke and the engine wouldn’t start when she needed power. So she had several problems that caused her to end up drifting in the ocean,’ the elder Appel said.

Joyce called the U.S. Coast Guard about a week and a half after her daughter left Honolulu, she said. ‘The Coast Guard, in Hawaii, did a search and rescue effort,’ she said.

‘I knew she didn’t even know the phone number here,’ she said.

‘I had hope all along, she is very resourceful and she’s curious and as things break she tries to repair them, she doesn’t sit and wait for the repairman to get there, so I knew the same thing would be true of the boat.’

The mother said the pair’s water purifier had stopped working and they were down to their last gallon of water when Jennifer got it fixed.

Two months into their trip, well after they were scheduled to arrive in Tahiti, the women began making distress calls, but there were no vessels close and they were too far out to sea for the signals to be detected on land.

They told the Navy that they survived because they had packed a water purifier and enough food for a year, mostly dried goods like oatmeal and pasta.

A photo provided by the Navy shows Fuiava smiling as a Navy sailor greets her dog, Zeus aboard the USS Ashland.

The women received a medical assessment, food and beds aboard the Navy ship, where they will remain until the next port of call, the Navy said.

‘The U.S. Navy is postured to assist any distressed mariner of any nationality during any type of situation,’ said Cmdr. Steven Wasson, the commanding officer of the USS Ashland.