Women reveal the worst messages they have ever received from men

A viral TikTok trend has women revealing the most shocking and repugnant messages they’ve received from men, including strangers and guys they were dating.

Screenshots of the insulting conversations are being posted in their videos, which are all ironically set to audio clips of Ava Watson’s song ‘I Found a Guy Told Me I Was a Star.’

‘I found a guy, told me I was a star,’ Watson croons in the background as the women point out the most disgusting messages they’ve been sent.

Trend: Women are sharing screenshots of the disgusting messages they’ve received from men 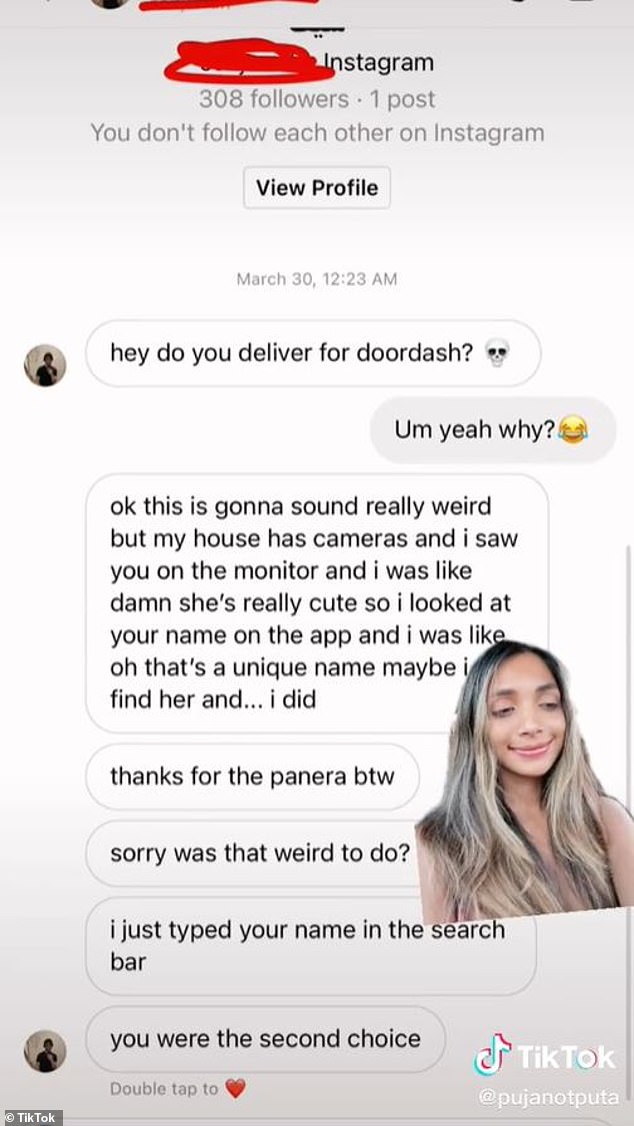 Creepy: TikTok user @222notputa had to deal with a guy who sought her out on social media after she delivered his Doordash order 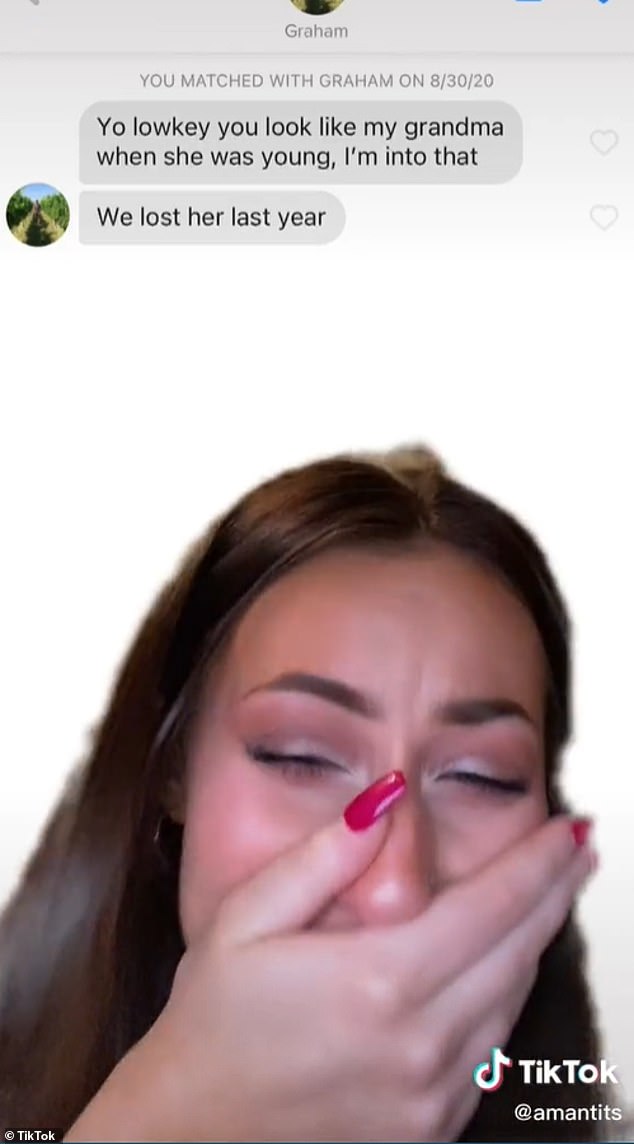 Too weird: Some of the messages were downright bizarre, including one from a man who tried pick up @@amantits because she resembled his late grandmother 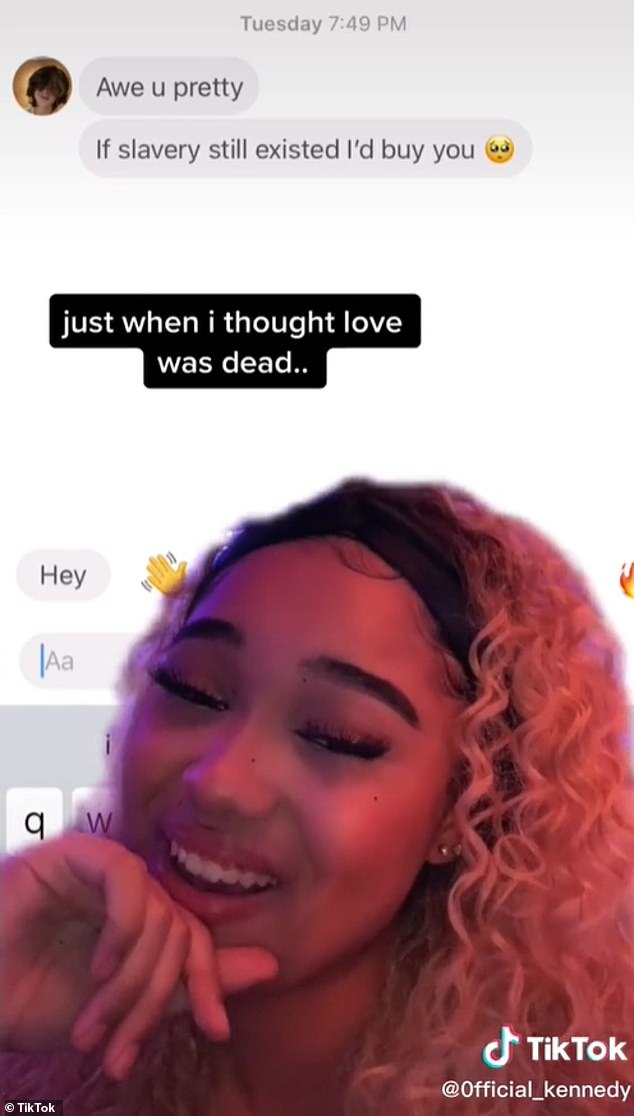 Offensive: Another offensive guy told @0fficial_kennedy that he would ‘buy’ her ‘if slavery still existed’ and meant it as a compliment

TikTok user @scemobimbo shared that one man tried to get her to send nudes in the name of ‘feminism,’ claiming her ‘internal misogyny’ was holding her back.

‘You being ashamed to send your tit pic is misogynistic. If you were really a feminist, you would be comfortable showing us your body,’ he wrote. ‘Breasts are not sexual body parts. They’re something everyone has.

‘Don’t let your internal misogyny stop you from sending nudes,’ he added. ‘Boobs are boobs and you need to learn a thing or two about feminism.’

Another man tried to convince @hanlip3737 that she should wait for him while he is dating someone else because he might want to come back to her.

‘I don’t want to end things with you,’ he explained. ‘I just want to pause them so I can try it with her. And if it doesn’t go well we can just pick up where we left off.’ 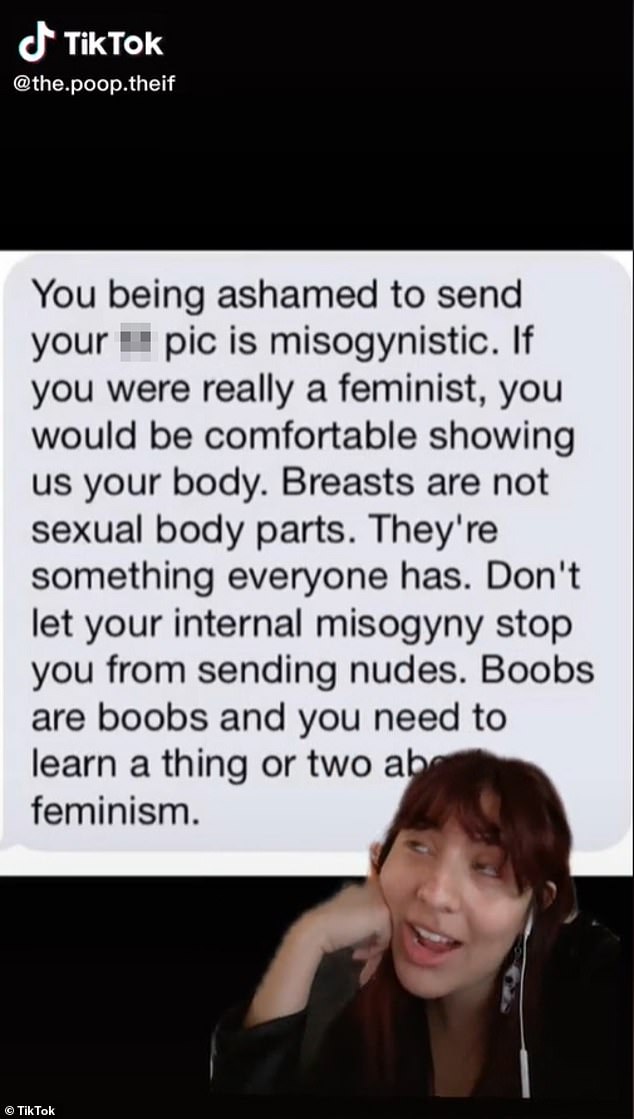 What an argument: TikTok user @scemobimbo shared that one man tried to get her to send nudes in the name of ‘feminism,’ claiming her ‘internal misogyny’ was holding her back 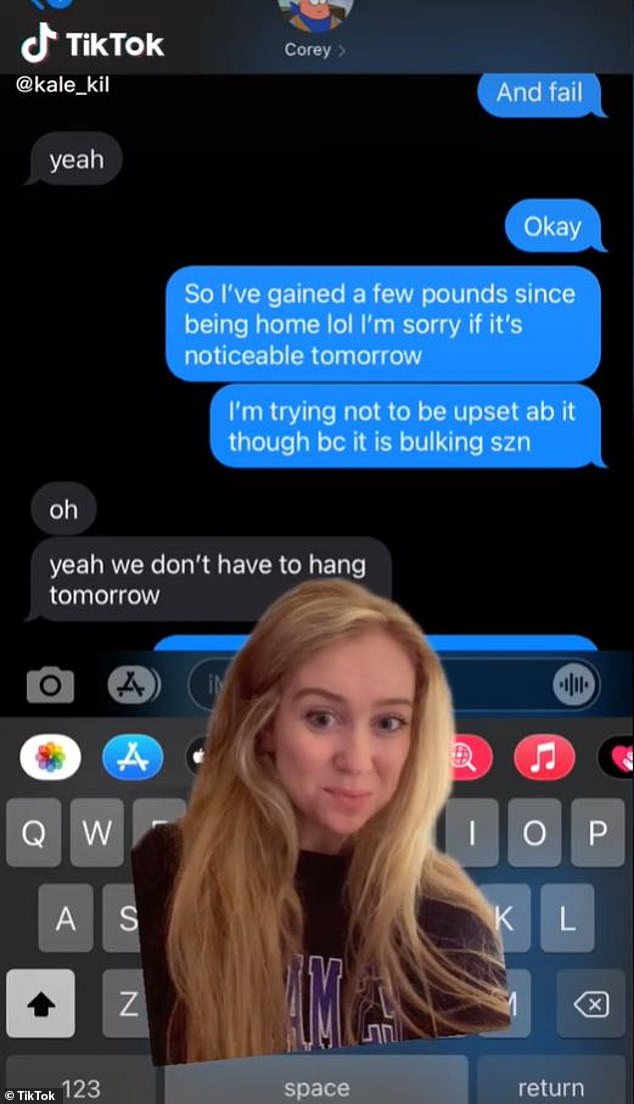 Rude: TikTok user @kale_kil had a guy cancel plans because she told him she had ‘gained a few pounds’ 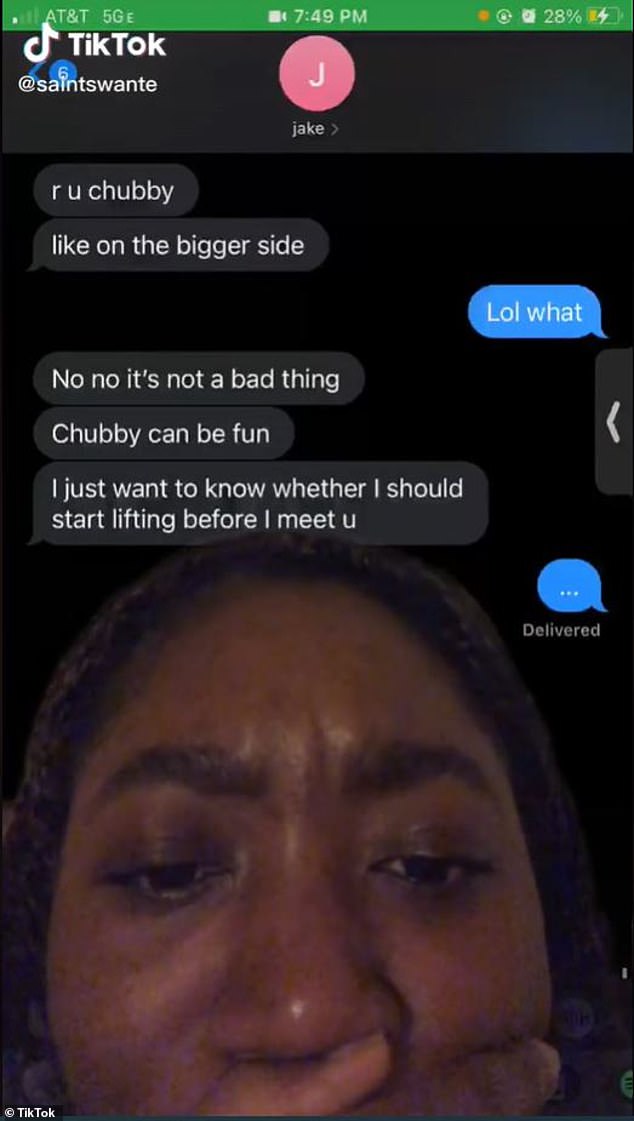 What a question: One man asked @saintswante if she was ‘chubby’ because he wanted to know if he should ‘start lifting’ before he meets her 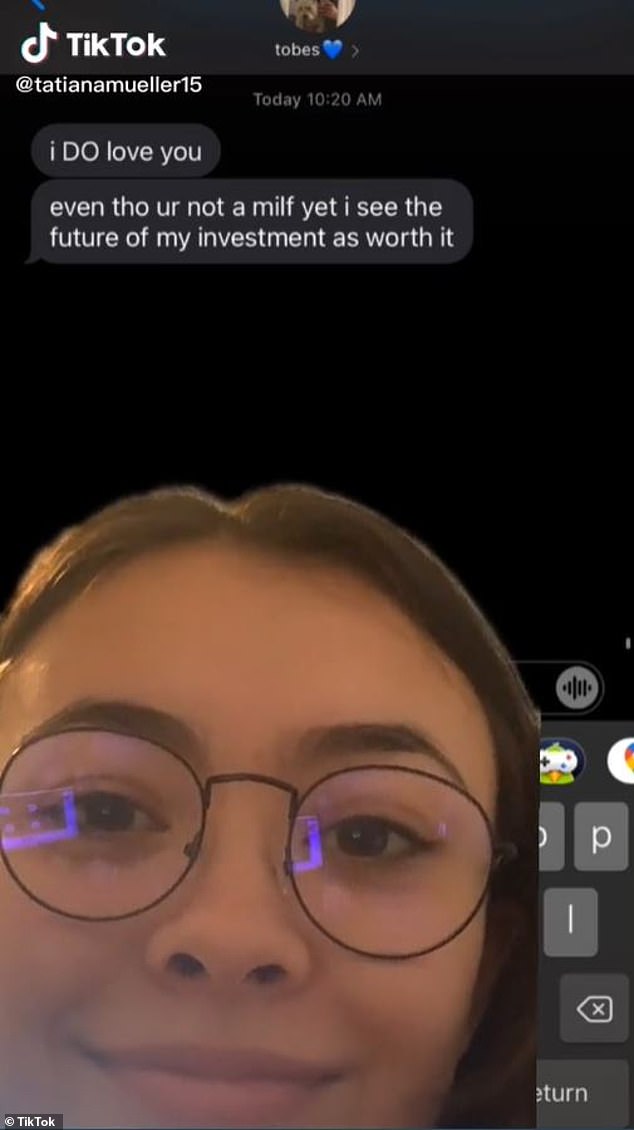 What? TikTok user @tatianamueller15 was told that she is an ‘investment’ by her partner 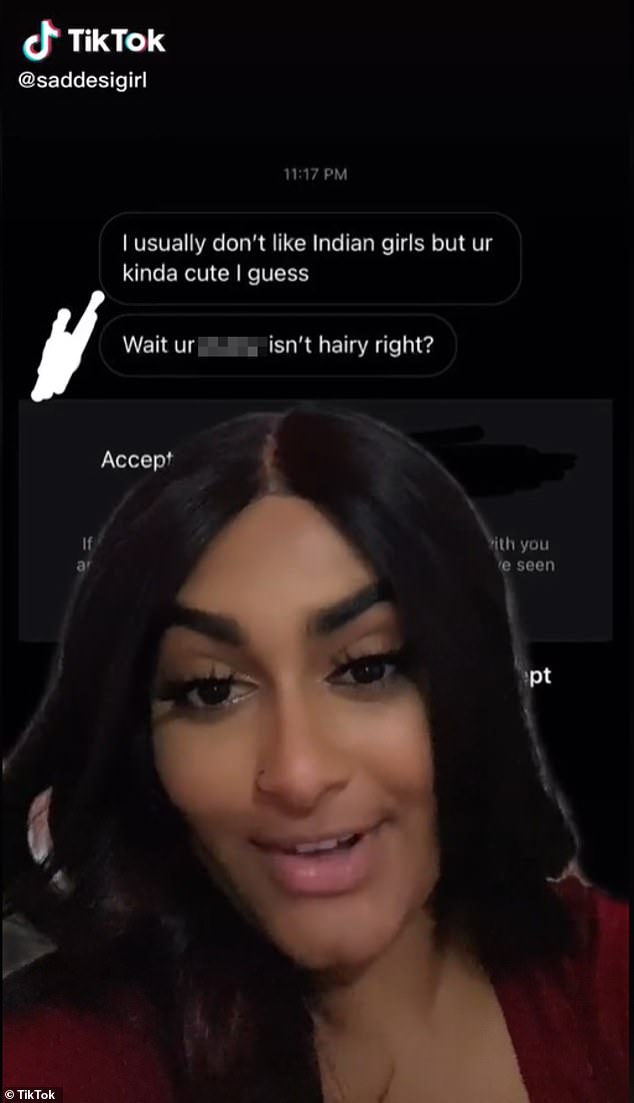 Unreal: TikToker @saddesigirl had to deal with casual racism followed by an offensive question

TikTok user @lottie.lion had a similar situation with a guy who told her he was only dating her because of her looks — and then he accused her of putting on weight.

‘I don’t dislike your personality. But I was mainly with you for your looks and your body. And now you’ve kind of put on weight,’ he texted, sharing a photo of an elephant for emphasis.

Meanwhile, @vapegodkate was told off by a guy because his girlfriend found a strand of her hair and that was somehow her fault.

‘My girlfriend found a pink hair in the backseat of my car,’ he texted her. ‘Thanks a lot, my little pony looking a**. 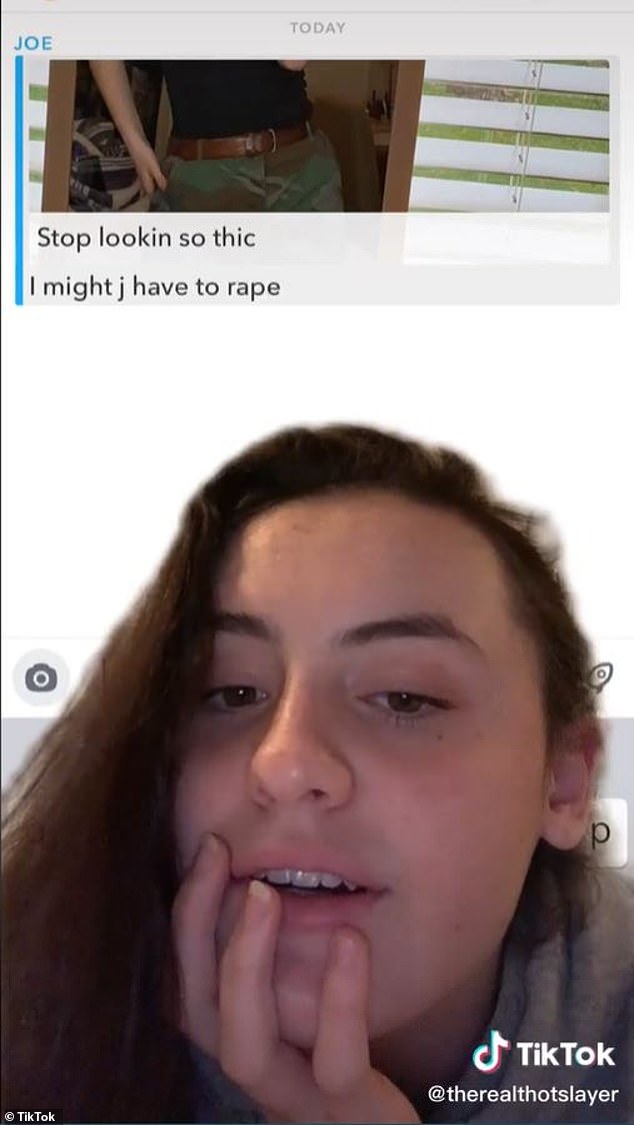 Scary: One man casually joked about raping @therealthotslayer after seeing a picture of her 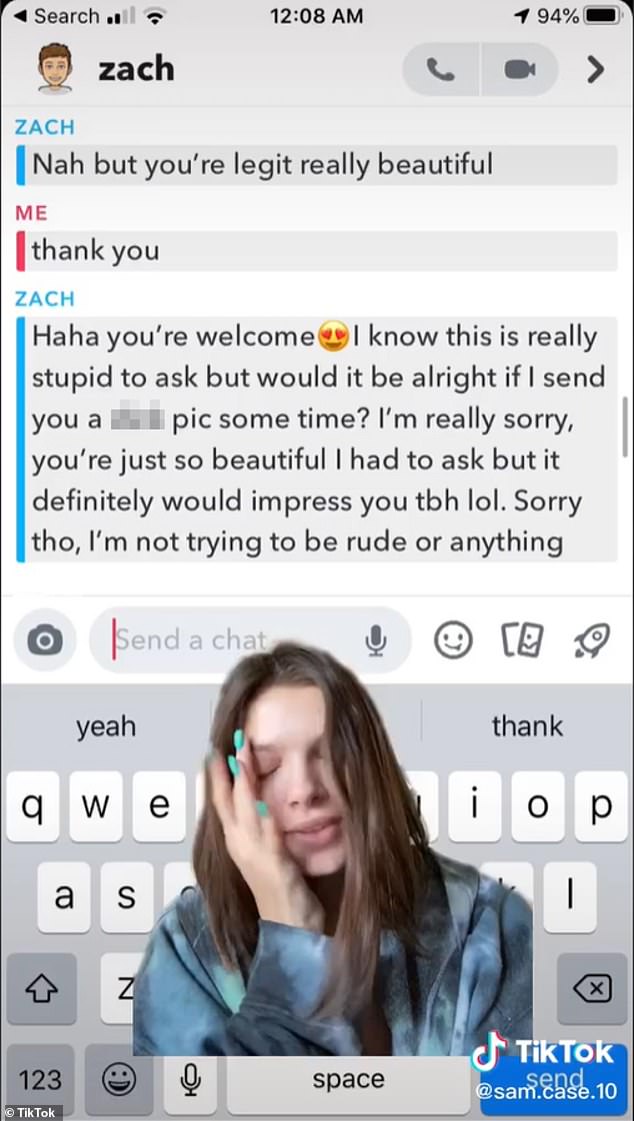 At least he asked? One guy wanted to know if he could send @sam.case.10 a d*** pick because she is ‘so beautiful,’ insisting that she would be impressed 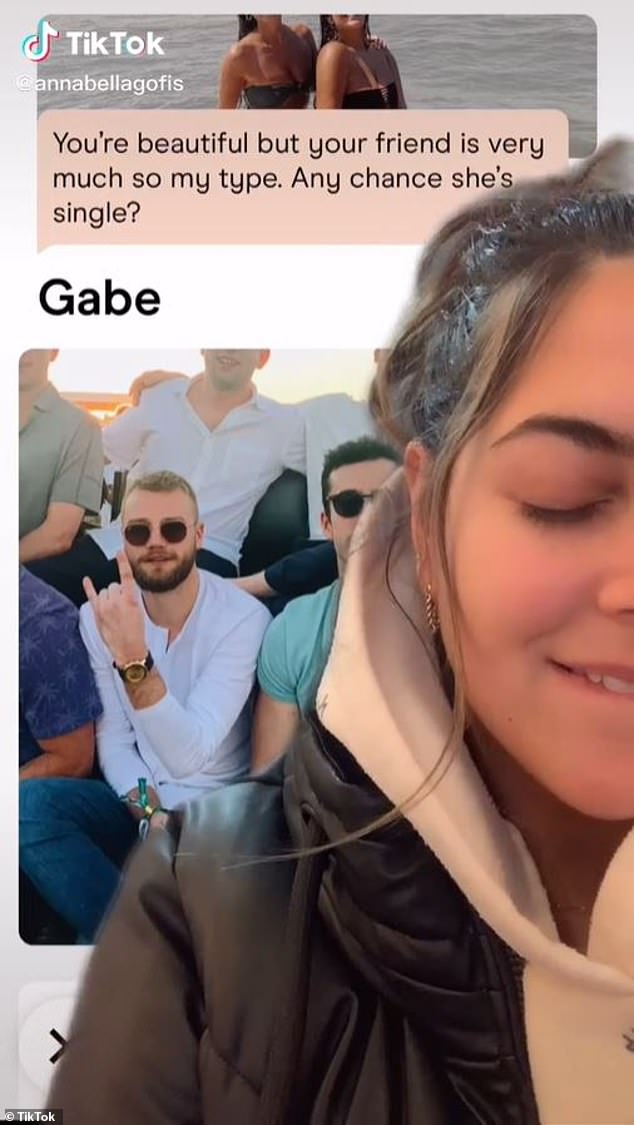 Nightmare: TikToker @annabellagofis had to deal with a man she matched with on a dating app asking her to hook him up with her friend 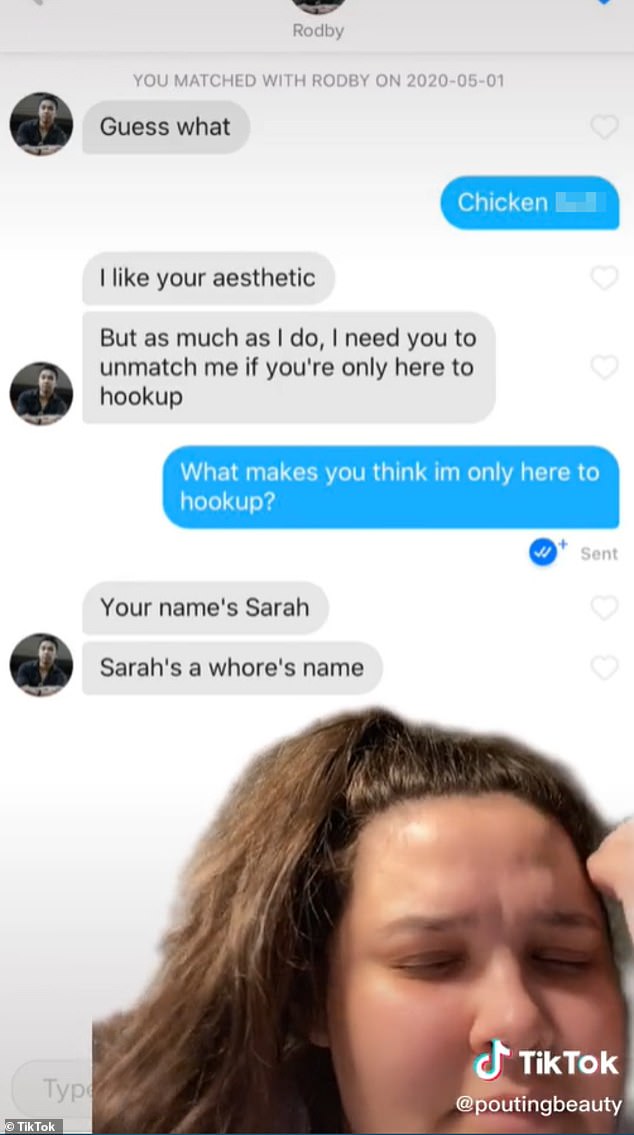 For real? One man told @poutingbeauty that ‘Sarah’s a whore’s name’ after assuming she was just looking for a hookup 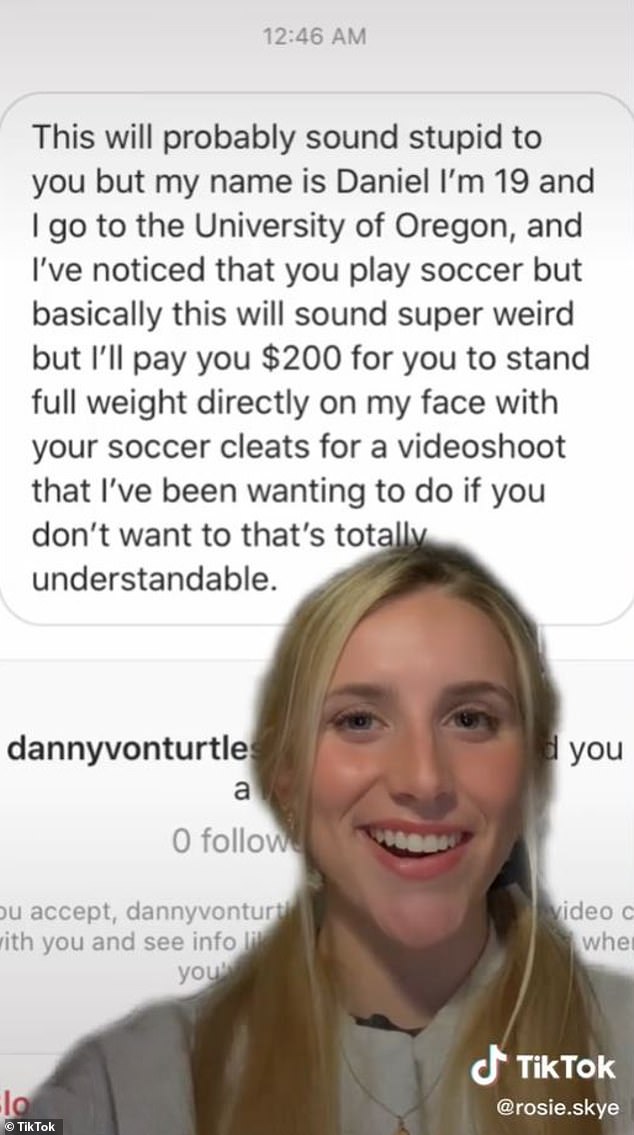 Weird world: TikToker @rosie.skye revealed a guy asked her to stand on his face with her soccer cleats on, claiming he’d pay her $200 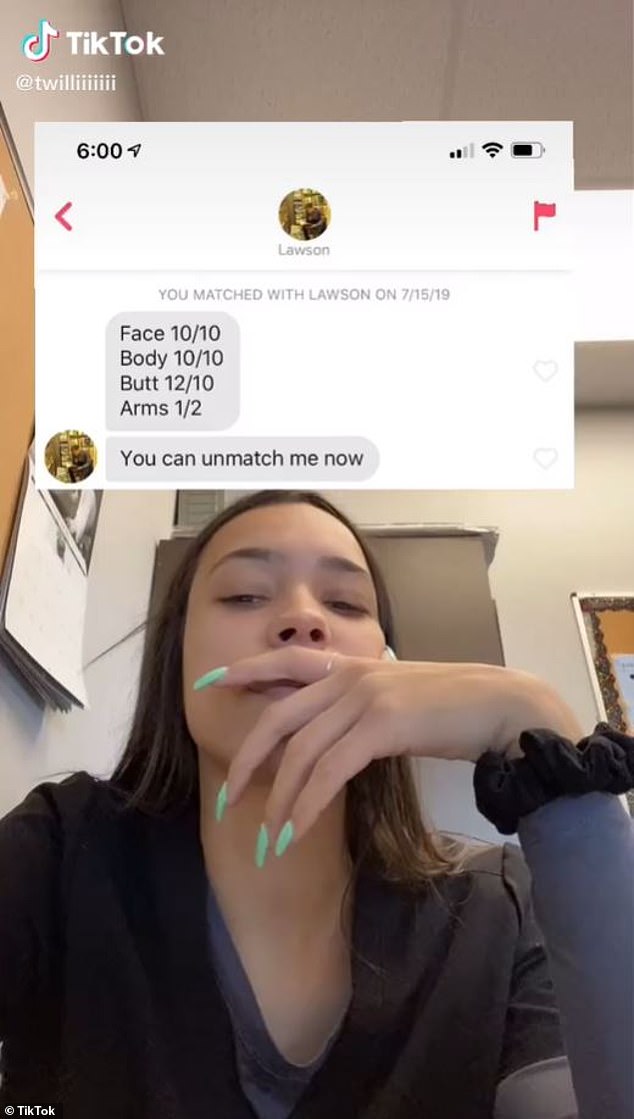 But why? One man felt compelled to score @twilliiiiiii’s face, body, butt, and arms

Some of the messages were downright bizarre, including one from a man who tried to pick up @@amantits because she resembled his late grandmother.

‘Yo lowkey you look like my grandma when she was young, I’m into that,’ he wrote after they matched on a dating app. ‘We lost her last year.’

And while that was certainly cringe-worthy, @222notputa had to deal with a guy who sought her out on social media after she delivered his Doordash order.

‘OK this is gonna sound really weird but my house has cameras and I saw you on the monitor and I was like damn she’s really cute so I looked at your name on the app and I was like oh that’s a unique name maybe I can find her and… I did,’ he wrote.

‘Thanks for the Panera btw. Sorry was that weird to do?’ he asked. ‘I just typed your name in the search bar. You were the second choice.’

But those aren’t even the worst of the worst. 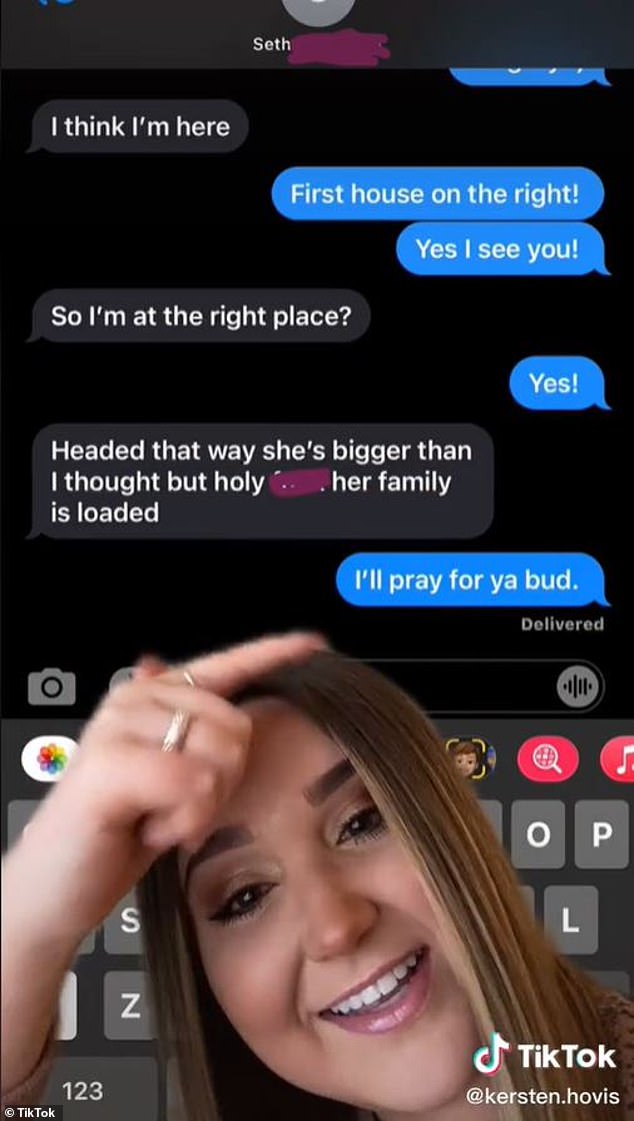 Whoops: One man thought he was texting someone else when wrote that @kersten.hovis was ‘bigger’ than he thought 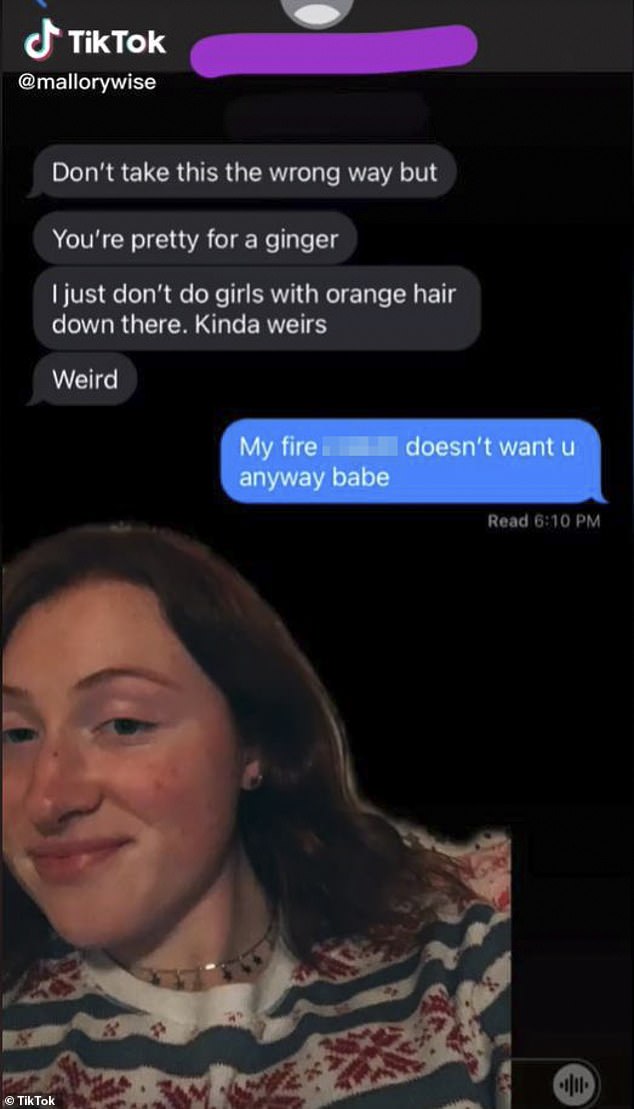 Backhanded compliment: TikTok user @mallorywise had a guy tell her that she is ‘pretty for a ginger’ 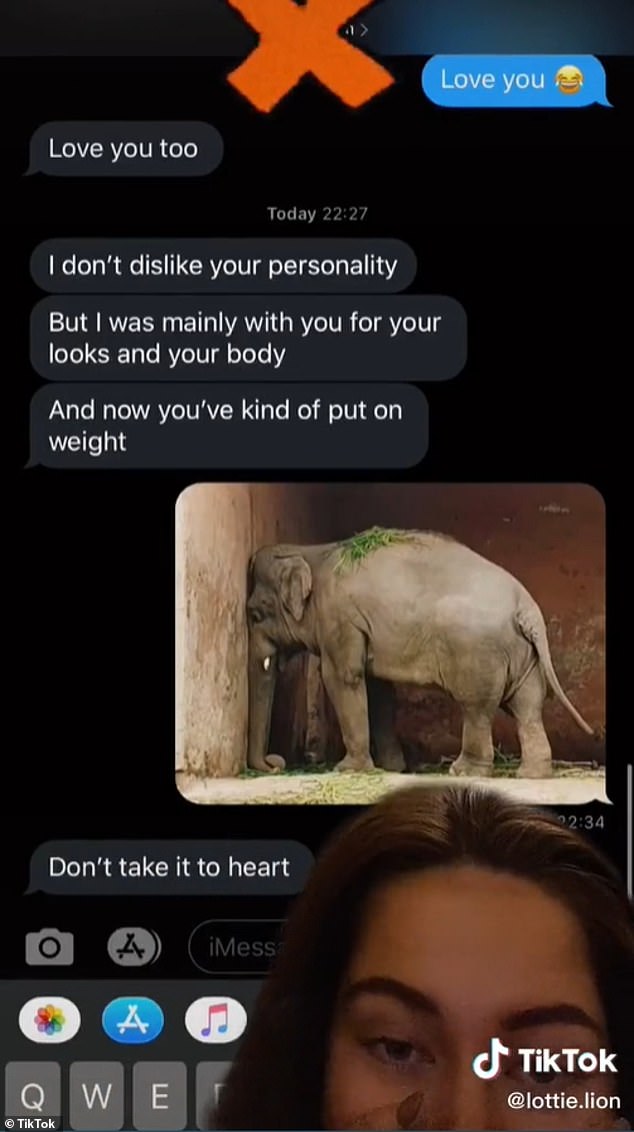 Outrageous: TikTok user @lottie.lion had a guy tell her he was only dating her because of her looks before he accused her of putting on weight 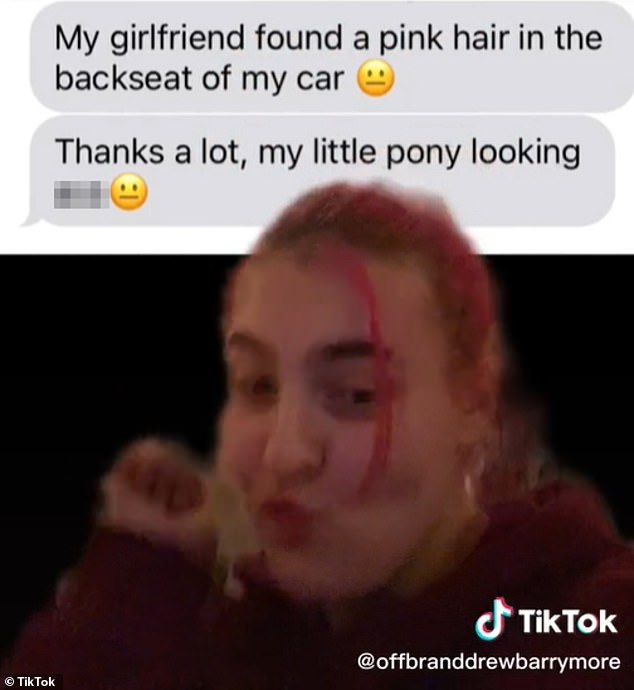 So strange: Meanwhile, @vapegodkate was told off by a guy because his girlfriend found a strand of her hair and that was somehow her fault

One man casually joked about raping @therealthotslayer after seeing a picture of her, writing: ‘Stop lookin so thic. I might j have to rape [sic].’

Someone else was downright mean, telling @bellamwhite that she is ‘obese’ and ‘unattractive.’

‘You think you have a fata** but you’re actually just fat, and your [sic] flat chested,’ he continued. ‘We make fun of you in our group chat for being ugly. Sorry but next time don’t be confident, I think you’re confused. All love tho.’

And another said he wanted to make @0fficial_kennedy — a woman of color — his slave.

‘Awe you pretty. If slavery still existed I’d buy you,’ he wrote, clearly intending the offensive message to complimentary.

The TikToker sarcastically captioned the clip: ‘Just when I thought love was dead…’