Women are sharing selfies with smeared lipstick on social media to raise awareness of the importance of getting tested for cervical cancer.

One in three 25 to 29-year-olds do not take up their test invites, according to Jo’s Trust, which started the campaign.

The charity, which supports women with cervical cancer, says screening prevents three out of four cases.

It carried out a survey that found women are snubbing the tests because they are embarrassed about their bodies.

Loose Women presenters Nadia Sawalha and Kaye Adams have attempted to combat this by sharing their worst/funniest smear stories in a Twitter clip. 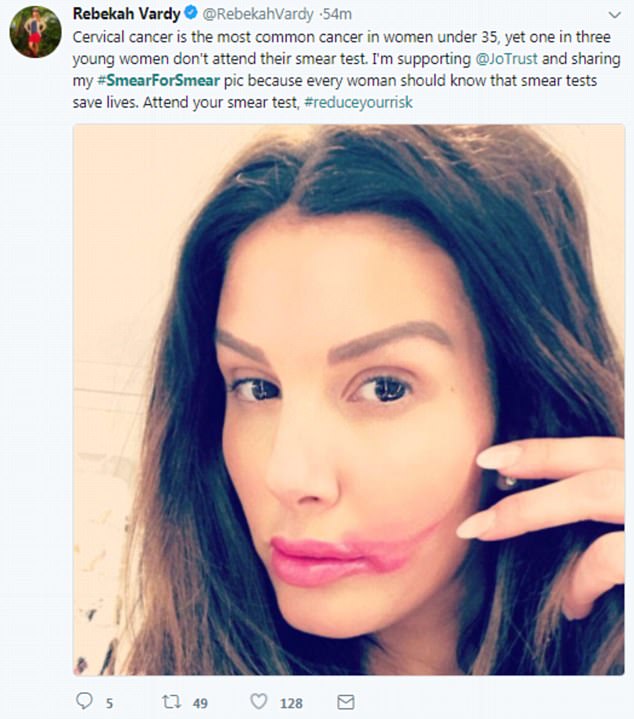 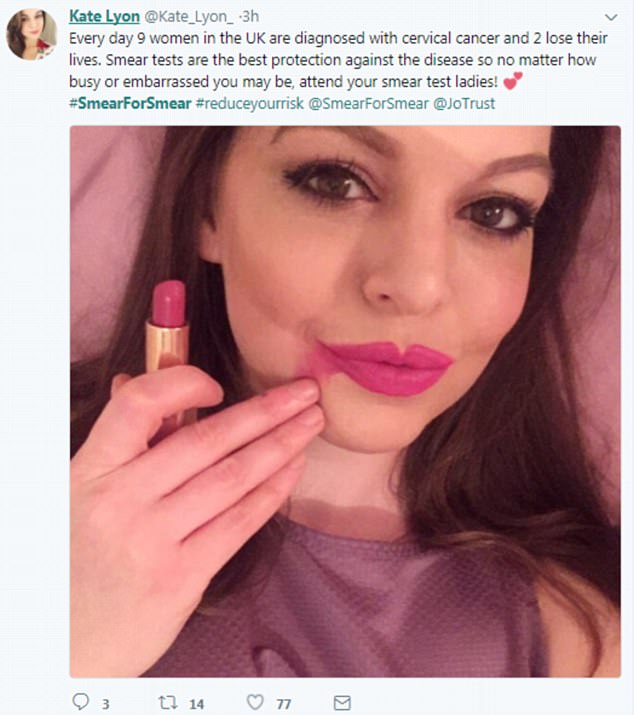 WHO CAN HAVE A SMEAR TEST

All women who are registered with a GP are invited for cervical screening:

Some 31 per cent of women admitted they don’t have a smear test if their bikini areas were hairy, while 34 per cent do so over fears of how their private parts appear.

Body shape and not smelling ‘normal’ were other reasons given, the poll of 2,000 women aged 25-35 found.

One in four eligible women (aged 25-64) do not currently take up their invitation for a smear test, rising to one in three among 25-29 year olds. 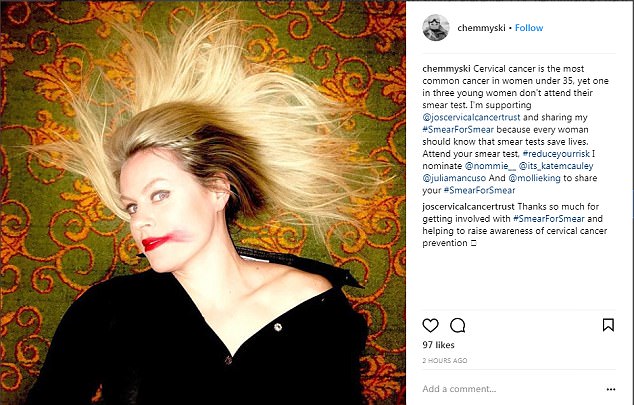 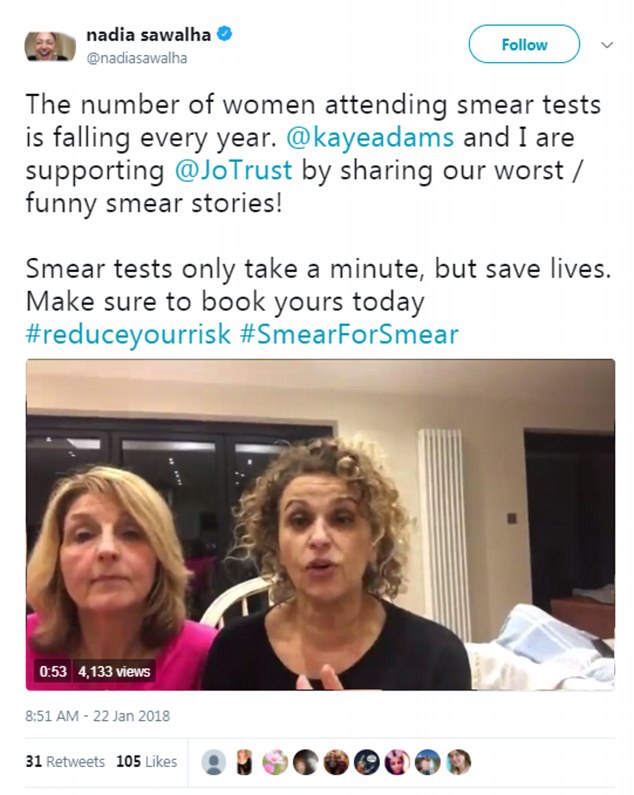 It is even as high as one in two in some areas of the UK.

Cervical cancer is the most common cancer in women under 35 and around 3,000 cases are diagnosed each year in the UK.

It’s possible for women of all ages to develop cervical cancer, although the condition mainly affects sexually active women aged 30 to 45. The condition is very rare in women under 25. 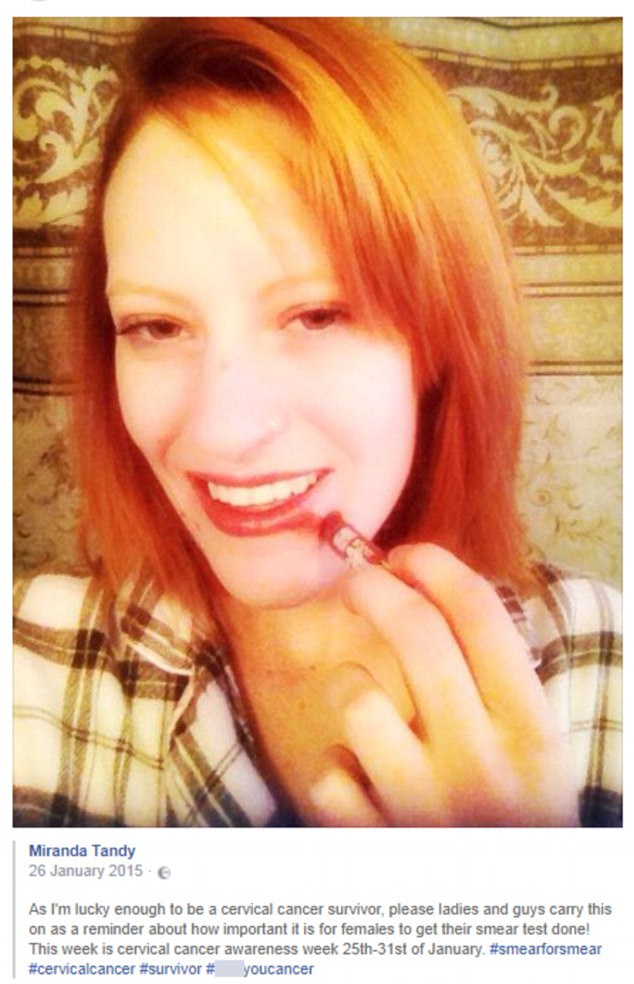 This woman, a cervical cancer survivor, took to Facebook to highlight the awareness week 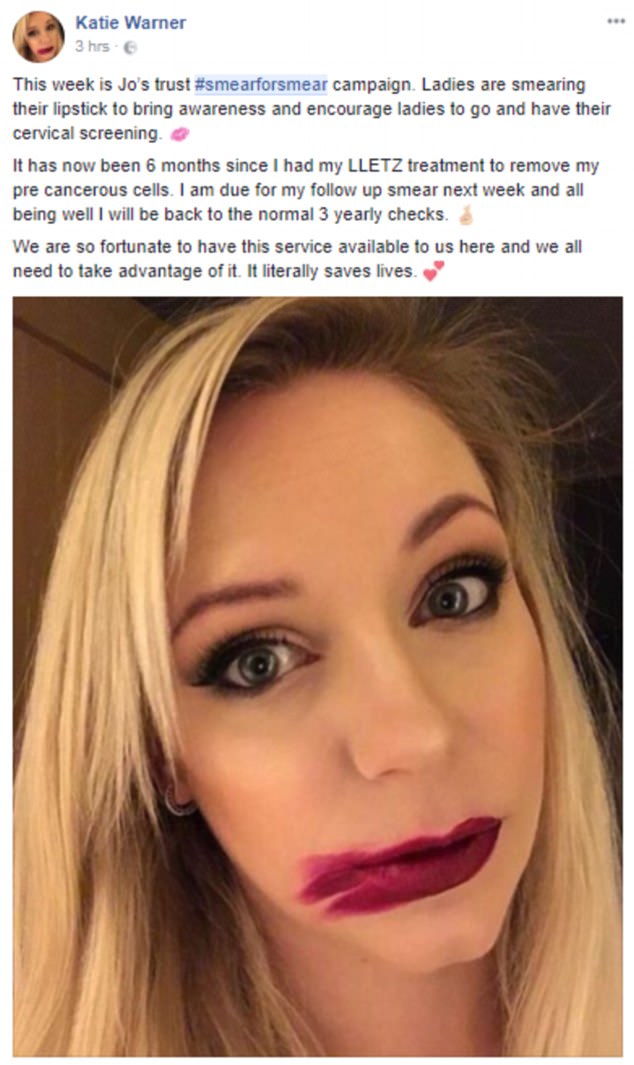 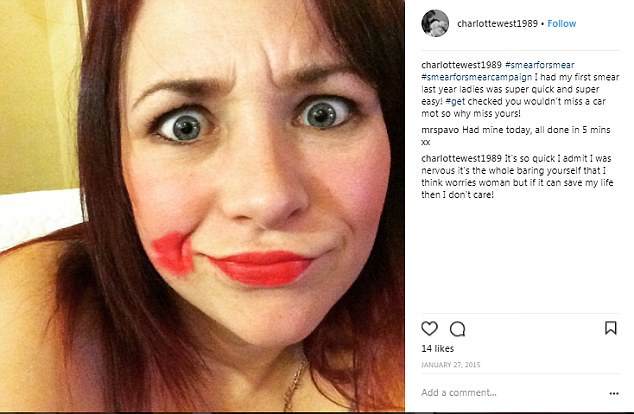 One in three 25 to 29-year-olds do not take up their test invites, according to Jo’s Trust 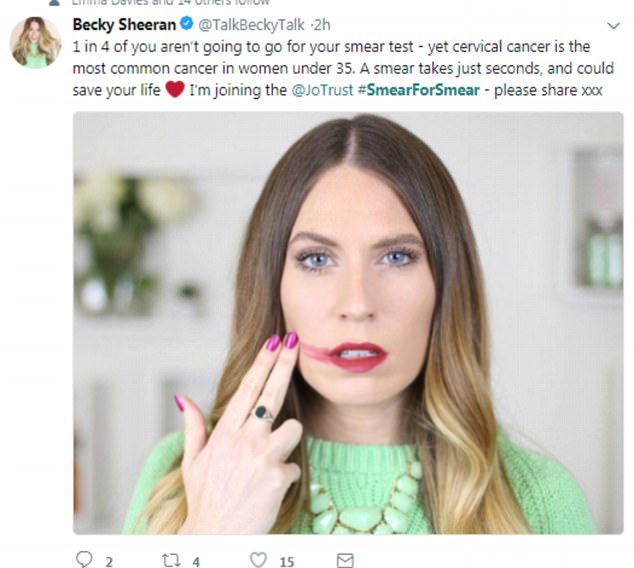 Robert Music, Chief Executive Jo’s Cervical Cancer Trust, said: ‘Smear tests prevent 75% of cervical cancers so it is a big worry that so many young women, those who are most at risk of the disease, are unaware of the importance of attending.

‘It is of further concern that body worries are contributing to non attendance. Please don’t let unhappiness or uncertainty about your body stop you from attending what could be a life-saving test.

‘Nurses are professionals who carry out millions of tests every year, they can play a big part in ensuring women are comfortable.’

Cervical screening isn’t a test for cancer, it’s a test to check the health of the cells of the cervix.

Most women’s test results show that everything is normal, but for around one in 20 women the test shows some abnormal changes in the cells of the cervix.

Most of these changes won’t lead to cervical cancer and the cells may go back to normal on their own.

But in some cases, the abnormal cells need to be removed so they can’t become cancerous.

Screening is usually carried out by the practice nurse at your GP clinic. You can ask to have a female doctor or nurse.

If possible, try to book an appointment during the middle of your menstrual cycle (usually 14 days from the start of your last period), as this can ensure a better sample of cells is taken.

It’s best to make your appointment for when you don’t have your period.

If you use a spermicide, a barrier method of contraception or a lubricant jelly, you shouldn’t use these for 24 hours before the test, as the chemicals they contain may affect the test.