‘I’ll keep him prisoner for you!’: Army of women swoon over ‘yummy’ fugitive, 29, after police post mugshot on Facebook when he went on run again

A fugitive who taunted police by boasting ‘catch me if you can’ has attracted an army of female admirers online after his mugshot was posted online.

Oliver Hargreaves is now being touted as the UK’s answer to ‘hot felon’ Jeremy Meeks after a social media appeal by Humberside Police attracted hundreds of comments.

Hargreaves, 29, is being hunted by officers as he is wanted on prison recall, although police have not revealed why.

After sharing Hargreaves’ mugshot online, the post was inundated with comments on his looks while others offered their services in apprehending him.

Sallyann Thompson wrote: ‘I can assure you if anyone finds him they will be keeping him […] what do you reckon would you be handing him in?’

Vez Blount posted: ‘I’m going to do society a favour and look for this man, keep y’all safe.’

Chelsea J. Morgan joked: ‘I’ll keep him prisoner for you!’

However not everyone who commented on the post was struck by his looks, blasting people’s disrespect for the law.

Lisa May Lawton wrote: ‘Wow! No wonder Jezza Kyle is making such a good living. The comments on here. Lack of self respect much…’ 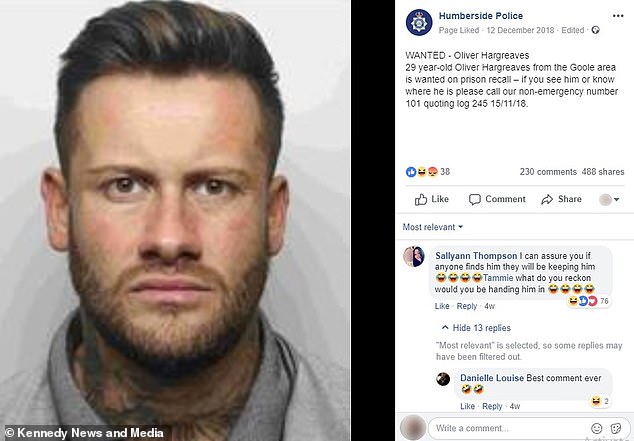 After sharing Hargreaves’ mugshot online, the post was inundated with comments on his looks while others offered their services in apprehending him

Amy J Gibbons wrote: ‘You’d want a criminal in your home? I don’t care if he’s robbed a shop or in for something far worse… pretty sure I want to be with someone who’s not going to be in and out of prison.. Jesus ladies, standards!’

Hargreaves, from Goole, East Yorkshire, is no stranger to dodging the long arm of the law after going on the run from North Yorkshire Police in 2014.

He taunted authorities with his ‘catch me if you can’ jibe on social media when he went on the run before cops raided his home and caught him napping.

Humberside Police posted its second appeal in December and neighbouring force North Yorkshire Police have appealed for information about his whereabouts as he is known to have links to Selby.

Jeremy Meeks gained worldwide fame when he was dubbed ‘the world’s hottest felon’ after his custody photo went viral in 2014.

Meeks has since swapped a life of crime for the catwalk and has had a baby with billionaire heiress girlfriend Chloe Green.

However not everyone who commented on the post was struck by his looks, blasting people’s disrespect for the law