Three women ‘throw phones, shoes, food and a metal boarding sign at Spirit Airlines staff in a Florida airport after their flight home to Philadelphia is delayed

Three women from Philadelphia have been arrested and face battery charges after they got into a physical altercation with Spirit Airlines staff in Florida when their flight was delayed.

The clip shows several women standing outside a gate inside the terminal throwing objects ‘such as phones, shoes, full water bottles, metal boarding signs and fast food’ at employees, according to police.

‘The victims were also punched and kicked in different sections of their bodies numerous times,’ the arrest report states.

It’s unclear what occurred in the moments leading up the time the video recording begins.

However the suspects appear to be arguing with one woman initially and other members of staff crowd around her for protection when the passengers start delivering blows.

Other airline staff and passengers are seen racing over to the victims.

Spirit Airlines insists it wasn’t a brawl and instead a one-sided attack.

‘We thank our Team Members for their professionalism and quick actions, and we also thank the Broward Sheriff’s Office for their assistance at the Fort Lauderdale-Hollywood International Airport yesterday,’ Spirit Airlines said in a statement.

‘Three Guests became combative following a delayed flight, and they were arrested for physically assaulting our Team Members. Three of our Team Members sustained minor injuries. 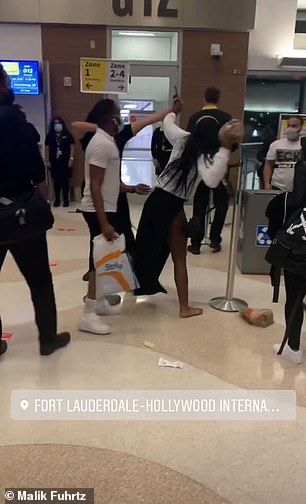 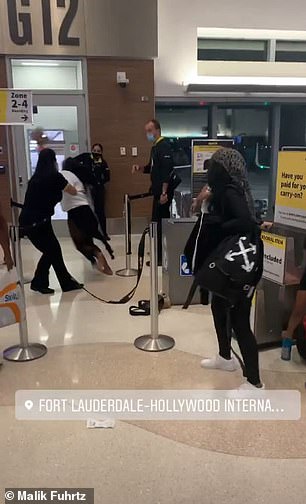 Video shows them throwing objects ‘such as phones, shoes, full water bottles, metal boarding signs and fast food’ at employees (left), according to police. Right, one suspect is seen running toward a member of staff as another tries to stop her

‘This violent behavior is completely unacceptable and has absolutely no place in airports or any other place of business. We will not tolerate abusive behavior of any kind. Further questions about this incident should be referred to law enforcement.’

The women were taken to the Broward County Jail. They were all arrested on charges of touch or strike battery and for Wright, there was the addition of petit theft.

‘The safety and security of the traveling public and airport employees is part of our core mission,’ an airport spokesperson said.

‘The behavior of the individuals as seen in the video during Tuesday’s incident is unacceptable and will not be tolerated in our facility. We applaud the prompt response by our airline partner and the Broward Sheriff’s Office.’ 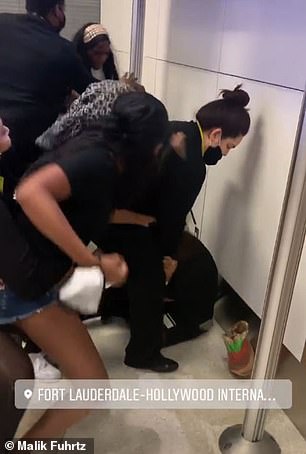 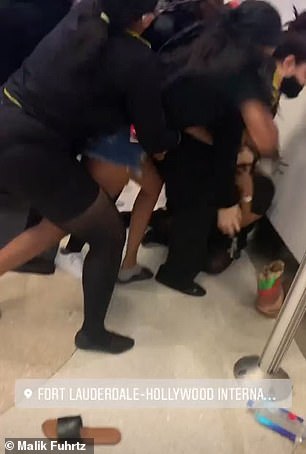 It’s not the first time Spirit Airlines staff have been seen on video involved in a physical altercation.

At the time Spirit claimed it was ‘a result of unlawful labor activity by some Spirit pilots designed to disrupt Spirit operations for our customers, by canceling multiple flights across our network.’

However the Airline Pilots Association, International (ALPA) denied the claims from the Miramar-based carrier.

The same year, five women on a flight from Baltimore to Los Angeles were involved in a brawl over loud music.