How all those coffees help to keep the weight off: Women who get a caffeine fix two or three times a day have less body fat than those who drink none

Many of us will reach for a coffee when we’re looking for a quick pick-me-up.

But it turns out our daily caffeine fix can also provide surprising health benefits.

A study has found that women who enjoy two or three cups of coffee a day have less body fat than those who drink less or none at all.

This is because coffee may contain compounds with anti-obesity properties which cause the total percentage of body fat to fall.

The pattern is seen in women of all ages, regardless of whether the coffee is caffeinated or decaffeinated.

Overall the British scientists found that the average total body fat percentage was 2.8 per cent lower among women of all ages who drank two or three cups of coffee every day (file photo)

Women who were aged between 20 to 44 and drank two or three cups of coffee per day had 3.4 per cent less belly fat compared with non-drinkers.

And women aged between 45 to 69 who drank four or more cups a day had 4.1 per cent less fat on their tummies.

Overall the British scientists found that the average total body fat percentage was 2.8 per cent lower among women of all ages who drank two or three cups of coffee every day.

It made no difference whether the women involved in the study suffered from chronic disease or smoked.

Coffee also appeared to have a positive effect on men but the differences were far less marked.

Men aged between 20 to 44 who drank two or more cups per day had 1.3 per cent less total body fat than non-coffee drinkers. They also had 1.8 per cent less on their trunk. 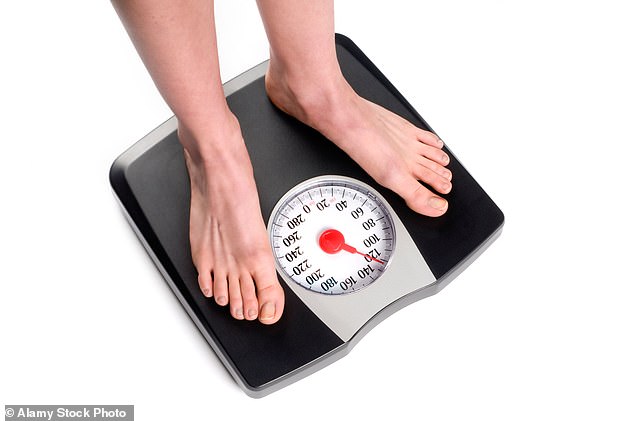 Study lead author Dr Lee Smith of Anglia Ruskin University, said: ‘Our research suggests that there may be bioactive compounds in coffee other than caffeine that regulate weight and which could potentially be used as anti-obesity compounds’ (file photo)

Just one juice can be deadly

Women who have just one sugary fruit drink a day are more than 40 per cent more likely to suffer from heart disease, researchers warn.

A study found those who regularly down drinks with added sugar are also more likely to develop diabetes or suffer a stroke than women who rarely or never do.

Cases of cardiovascular disease rose by 42 per cent and strokes by 21 per cent among those who had one or more fruit drinks with added sugar daily. Similar consumption of fizzy drinks was linked to a 23 per cent rise.

Researchers in the US tracked more than 106,000 women over nearly 25 years. None had been diagnosed with heart disease, stroke or diabetes at the outset.

The study found women with the highest sugary drink intake were younger, more likely to be smokers and obese.

Lead author Professor Cheryl Anderson, of the University of California, said: ‘Too much sugar in the blood is associated with oxidative stress and inflammation, insulin resistance, unhealthy cholesterol profiles and type 2 diabetes.’

Public Health England recommends adults should have no more than 30g of added sugars a day, around seven sugar cubes.

The findings – based on data in the US and published in The Journal of Nutrition – suggest that coffee could become a key part of a healthy diet and may help combat obesity.

Study lead author Dr Lee Smith of Anglia Ruskin University, said: ‘Our research suggests that there may be bioactive compounds in coffee other than caffeine that regulate weight and which could potentially be used as anti-obesity compounds.

‘It could be that coffee, or its effective ingredients, could be integrated into a healthy diet strategy to reduce the burden of chronic conditions related to the obesity epidemic.

‘It is important to interpret the findings of this study in light of its limitations – the study was at a specific point in time so trends cannot be established.

‘However, we don’t believe that someone’s weight is likely to influence their coffee consumption.’

The study comes as experts suggest you should top up your supplies of instant coffee with smaller containers to keep its flavour and aroma for longer.

Martin Isark, of the Can I Eat it? website, said: ‘The fresh coffee-like aroma is short-lived. Once it’s gone it’s gone for good.

‘After a few days, even the best instant coffee is much more bland and tasteless.’

He suggested buying jars of no larger than 50g to 100g.