Laura Everley, 38, dismissed her bloating as IBS and even tried going gluten-free before she received her diagnosis

Women are more likely to change their diet than seek medical help when suffering from a key symptom of ovarian cancer, a charity has warned.

Despite persistent bloating being one of the main signs of the disease, half of women say they would try measures such as eating more probiotic yoghurts or going gluten-free before visiting a doctor.

Only a third of women said they would visit their GP if they were concerned, according to the survey of more than 1,000 women by Target Ovarian Cancer.

Instead, many will try self-medication through diet – often cutting out certain foods including gluten or dairy, or consuming drinks such as peppermint tea.

Ovarian cancer is the sixth most common cancer among British women, with more than 7,400 new cases each year. It mainly affects those who have been through the menopause, with 82 per cent of cases among women over 50.

Survival rates are poor because three-quarters of women are diagnosed once the cancer has already spread.

This is partly because hallmark symptoms – bloating, a swollen tummy and frequent urinating – are often mistaken for other conditions such as irritable bowel syndrome.

Previous studies have shown that just 1 in 5 women can name persistent bloating as a symptom of ovarian cancer which experts have described as ‘alarming’.

Laura Everley, 38, dismissed her bloating as IBS and even tried going gluten-free before she received her diagnosis.

The mother of one had also experienced lower-back pain, constipation and a frequent need to urinate.

But as Mrs Everley had previously suffered from IBS and endometriosis, she put her symptoms down to these conditions. 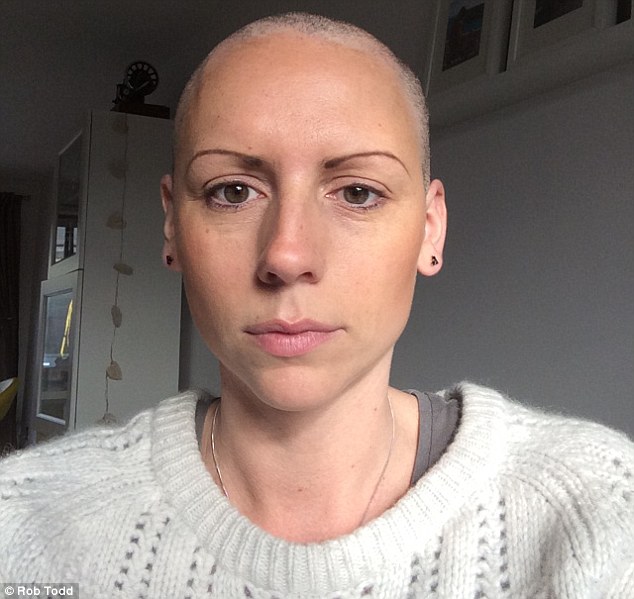 Mother of one Laura Everley (pictured) had also experienced lower-back pain, constipation and a frequent need to urinate. She is seen here during chemotherapy in 2015

Mrs Everley, from Crawley, said: ‘Before I was diagnosed I was experiencing all of the symptoms of ovarian cancer, including bloating.

‘I thought that maybe I might have irritable bowel syndrome because there are similar symptoms.’ It wasn’t until around three months after her symptoms began, that Mrs Everley saw a Facebook post detailing warning signs of ovarian cancer.

‘I realised I had them all,’ she explained. Medics confirmed she had a cyst, which was removed and sent away for a biopsy.

In October 2014 she was diagnosed with clear cell carcinoma, a rare form of the disease which accounts for just 3 to 5 per cent of ovarian cancer patients in the western world.

Tests also confirmed that the disease had spread.

Mrs Everley, who has been married to mortgage adviser Mark, 42, for 14 years, said: ‘I think the worst part was having to tell my son Harry.’

Now aged eight, he was only five at the time. 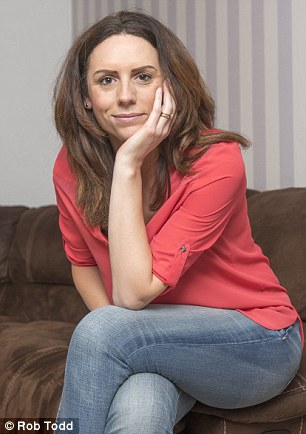 Ovarian cancer survivor Laura Everley at her home in Crawley

While Mrs Everley has not yet had the all-clear, her condition is stable and she is in a ‘good place’.

She works part-time in Sainsbury’s and helps Target Ovarian Cancer to promote awareness.

And she urges any woman who recognises the symptoms she had to see their GP immediately.

Mrs Everley said: ‘The idea of cancer hadn’t even entered my head.

‘You just never dream this is going to happen to you.’

The latest research, conducted through a YouGov poll, found those who are most at risk of developing ovarian cancer are least likely to google their symptoms, leaving them at further risk of a delayed diagnosis.

Annwen Jones, chief executive of Target Ovarian Cancer, said: ‘A probiotic yoghurt should not be preventing a woman from visiting the GP promptly if something is worrying her.

‘Women should not be risking their lives because of the enduring awareness gap around the symptoms of ovarian cancer.’

Last month it was revealed that thousands of British cancer patients die needlessly as NHS cancer survival rates lag behind the rest of the world.

The study, published in The Lancet using data from 2010 to 2014, ranked the UK 45th out of 59 countries, with only 36.2 per cent surviving five years. Some countries achieve nearly double that.

The average risk of developing ovarian cancer is one in 50, but factors such as being overweight and smoking increase the risk.