A woman’s brain gets more active, not less, as she approaches orgasm, a new study finds.

Researchers from the Rutgers University in Newark, New jersey performed more detailed brain scans of women leading up to, during and after orgasm than have ever been done before.

While the study confirmed earlier findings about pain levels, it overturned previous research that suggested that parts of a woman’s brain ‘turn off’ when she orgasms.

Instead, the Rutgers research found a slow build of activity in the parts of women’s brains associated with memory, movement and emotion that peaked when her physical pleasure did.

A new study shows that areas of women’s brains become increasingly active as she approaches an orgasm, contrary to prior research

Dr Nan Wise asked 10 women to ‘donate their orgasms to science,’ as she is fond of saying.

The women were asked to orgasm twice, in whatever order they preferred, by stimulating themselves and by being stimulated by their partners, all while in a functional magnetic resonance imaging (fMRI) machine.

But this kind of machine is exactly what enabled the researchers to see new information about what happens in a woman’s brain as she orgasms, so long as she stays still.

So Dr Wise and the research team developed a contraption that she calls ‘the happy helmet’ to support and stabilize the women’s heads so that the fMRI could take accurate images while the rest of their bodies were more free to move.

Dr Wise said the women felt like they were doing some thing empowering, akin to ‘burning their bras as a kind of sexual liberation thing.’

The participants ‘felt really good that they got to a place in their sexuality and bodies’ that they could participate in the study, she says.

No matter who was bringing them to climax, Dr Wise’s study found that, contrary to popular belief, women’s brains do not need to ‘turn off’ in order for them to get turned on enough to orgasm.

In fact, as a woman approaches orgasm, ‘a lot of different areas [of the brain] start ramping up: sensation and integration of sensation, motor areas – orgasm involves a lot of muscle tension in the body – and areas that come online when we are experiencing something rewarding,’ says Dr Wise.

Her observations were essentially opposite to the findings of a 2005 study done in the Netherlands by Dr Gert Holstege – ‘the only other lunatic crazy enough to do orgasm studies’ – at the University of Groningen.

Dr Wise says that the differences in the methods of each study likely explain their contrasting outcomes.

In the first, done by researchers at the University of Groningen researchers used positron emission tomography (PET) scanning technology to take a snap shots of women’s brains. The study participants were also only brought to orgasm by their partners, not by themselves.

Dr Wise says that while PET scans are effective for many things, her fMRI scans allowed her to see how the brain’s activity changed over time.

The University of Groningen study’s images showed that activity in the frontal cortex of women’s brains fell below their normal resting levels.

In her study, ‘we didn’t have any indication that the frontal regions went below baseline,’ says Dr Wise. 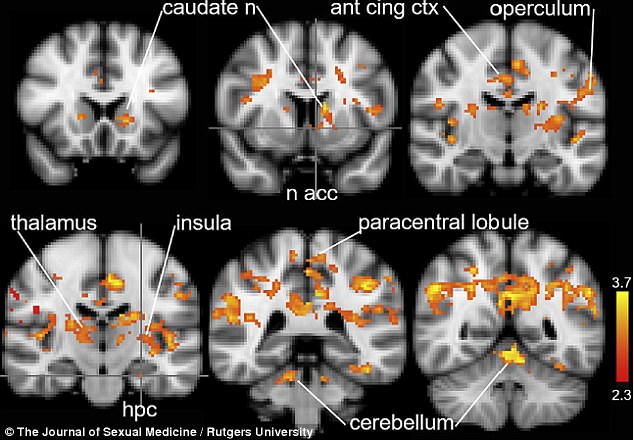 fMRI scans of women’s brains showed that there was more activity in women’s brains during orgasm (bottom) related to motor tension, sensation, the brain’s reward system than before orgasm (top)

‘The ability to have an orgasm is probably related to the ability to pay attention to your sensations,’ she says. ‘Your mind will work when you pay attention, and the frontal cortex comes on in evaluating rewards and participating in them.’

The frontal regions of the brain have ‘hedonic hotspots,’ parts of the reward system of the brain that is activated during orgasm. The study found that orgasm also leads to the release of dopamine and endogenous opioids in the brain.

These natural opioids help to explain the ‘increases in both pain detection and tolerance,’ that women experience during orgasm, says Dr Wise.

Leading up to orgasm, ‘a lot of regions get online to reach some sort of critical mass, then you go over, which apparently creates a lot of oxygenation of brain, good thing like brain exercise.’

Dr Wise is shocked by the limited research on orgasms and sex, and concerned by the fact that young people are having less sex in the US.

‘We need to know more about the sexual brain, like, hello?’

Her research also revealed how just thinking about sexual stimulation could ‘light up’ these areas of the brain, and she says that in 2011 she published the first study systematically mapping connections between the genitals and the brain.

She hopes that research into how the brain responds to sexual pleasure can ‘open a window into the pleasure brain.’

Dr Wise says that ‘we are living in an age of anhedonia,’ an inability to experience pleasure, ‘and need to understand how to harness healthy hedonism so that we don’t need external things to try to jack up our sense of pleasure and satisfaction.’