This is only temporary with most women’s voices being back to normal a year after giving birth, a study found.

Scientists believe women’s voices become deeper after having children in an attempt to sound more authoritative as new parents.

Lead researcher Dr Kasia Pisanski, from the University of Sussex, said: ‘Research has already shown that people with low-pitched voices are typically judged to be more competent, mature and dominant, so it could be that women are modulating their own voices to sound more authoritative, faced with the new challenges of parenting.’

Voice changes may also be driven by hormone fluctuations, she adds.

Singer Adele claims she sounded ‘like a man’ while pregnant, which she credits for helping her to hit the low notes in the Oscar-winning James Bond theme song Skyfall, adding ‘these days I do struggle to get down there’.

Actress Kristen Bell, who voiced the character of Anna in the Disney hit Frozen while expecting her daughter Lincoln Bell Shepard, reportedly had to to re-record some of her lines due to her deep voice.

Singer Adele claims she sounded ‘like a man’ while pregnant, which she credits for helping her to hit the low notes in the Oscar-winning James Bond theme song Skyfall 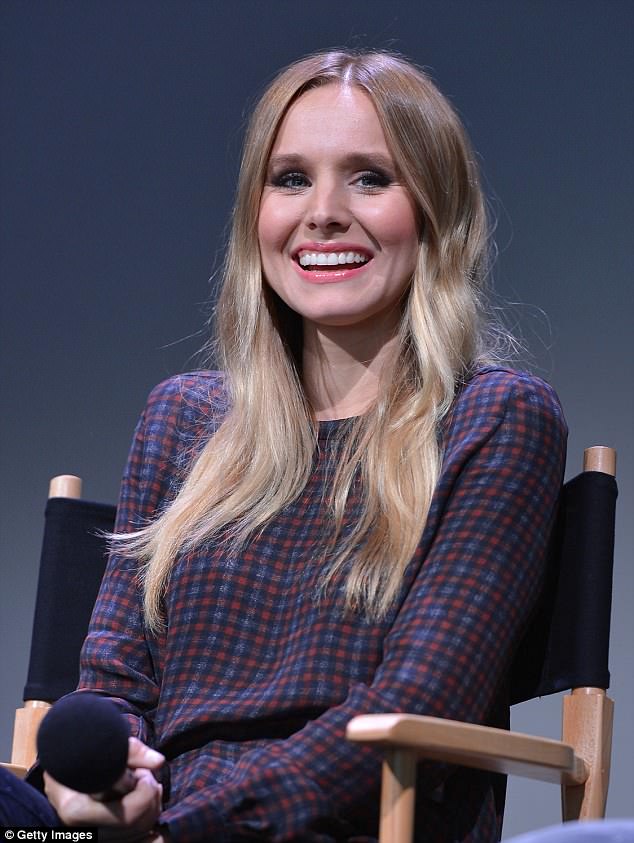 Kristen Bell, who voiced the character of Anna in the hit Frozen while expecting her daughter Lincoln Bell Shepard, reportedly had to to re-record some of her lines due to her deep voice

ARE ANTIDEPRESSANTS SAFE TO TAKE DURING PREGNANCY?

The research on the effects of taking antidepressants during pregnancy for both mothers and babies is still nascent.

The American College of Obstetricians and Gynecologists recommends that women consult with their doctors to decide whether to stay on or start antidepressants during pregnancy.

The risks are thought to be relatively low, and a mother’s depression itself can also have consequences, like a low birth weight, for her baby.

But the treatment – antidepressants – may have a similar effect according to some research that linked the drugs to lower birth weights as well.

Different kinds of antidepressants also have different effects for developing infants, according to the Mayo Clinic.

‘Unlikely’ due to fatigue

Dr Pisanski said: ‘Our results show that, despite some singers noticing that their voices get lower while pregnant, the big drop actually happens after they give birth.

‘One possible explanation is that this is caused by hormone changes after childbirth.

‘We know that after pregnancy, there’s a sharp drop in the levels of key sex hormones, and this could influence vocal fold dynamics and vocal control.’

Dr Pisanski added it is ‘unlikely’ the effect is due to mental and physical fatigue alone.

The researchers analysed 20 mothers, including singers, actresses, journalists and celebrities.

They compared archive interview footage from the women five years before and after their pregnancies.

Their highest pitches also reduce by over two piano notes.

Yet, this is not permanent, with most women’s voices going back to normal around a year after giving birth.

Adele previously said she struggles to hit the lowest notes in her hit Skyfall now she has given birth to her son Angelo.

Last year she told a crowd in Sydney: ‘When I wrote that song, I was heavily pregnant.

‘And a side effect or symptom, however you felt about your pregnancy, was my voice got a lot lower, so my larynx dropped.

‘Any other females here sound like a man when they were pregnant? No, just me? Okay.

‘Basically, that’s why the verse is so very low. That’s the reason, and these days I do struggle to get down there, so do bear with me, alright?’