Wonder is ‘one of the life-affirming treats of the year’

There will be many, surely, who look at the synopsis of Wonder and think exactly what I did: hmm, a film about a young boy with facial deformities growing up in New York? That doesn’t sound like anything I particularly want to see in the run-up to Christmas.

Well, I was wrong and others will be too, and they risk missing out on a film that, while undoubtedly sentimental, turns out to be one of the life-affirming treats of the year. Yes, it will make you cry but you’ll also come out vowing to be a slightly better person.

August Pullman – played by Room star Jacob Tremblay – is ten years old and has grown up surrounded by love. 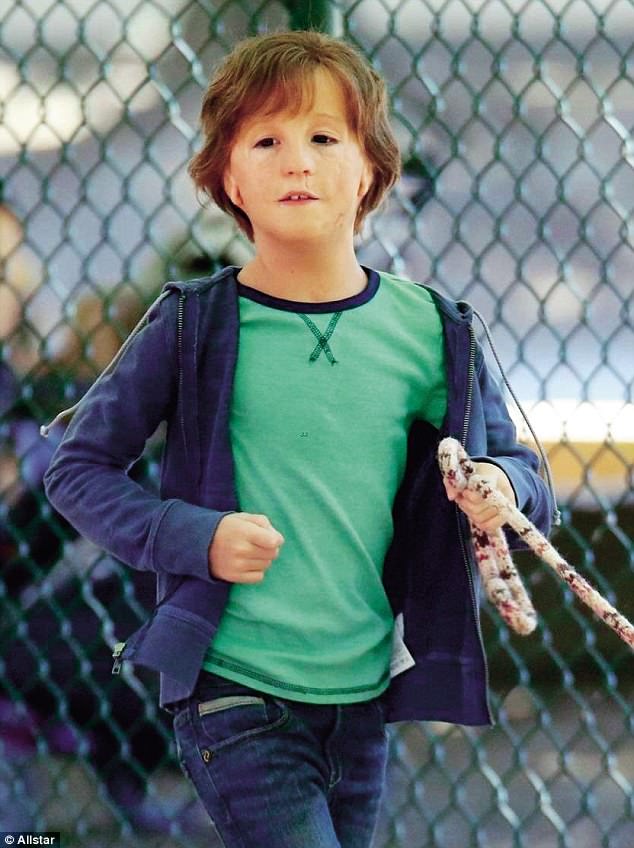 His devoted but intellectually frustrated mother, Isabel (Julia Roberts), loves him, his cooler-than-cool dad (Owen Wilson) loves him; heck, even his older troubled teenage sister, Via (Izabela Vidovic), loves him.

But when he goes outside… well, at best people stare, at worst small children burst into tears.

That’s because August was born with what I’m still learning to call ‘facial differences’. Even after 27 separate surgeries, he still does not look remotely like other boys do.

Small wonder that when he does venture outside he prefers to wear his beloved full-face space helmet and that his favourite holiday is Halloween, when he can wear a mask without standing out. 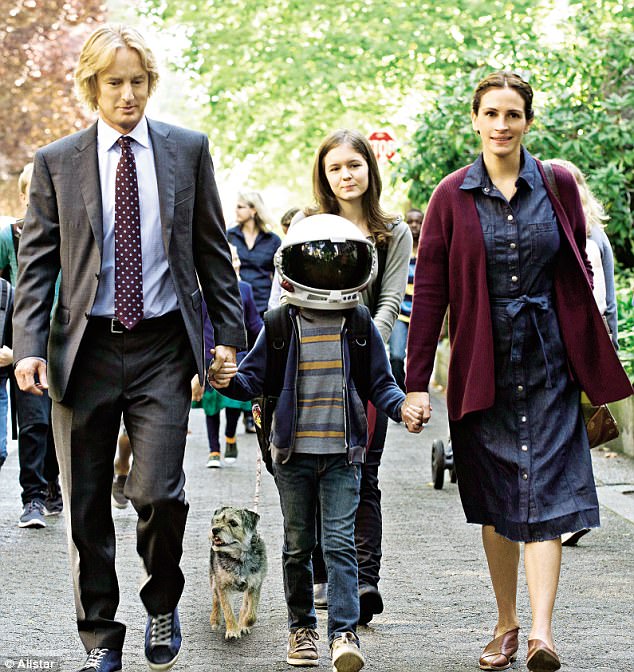 Born with ‘facial differences’ Auggie has grown up surrounded by the love of his family: dad Nate, sister Via and mum Isabel (Owen Wilson, Izabela Vidovic and Julia Roberts, above)

And small wonder too that the difficult decision to stop teaching him at home and send him to middle school threatens to spark a crisis.

Which is pretty much where Wonder – written and directed by Stephen Chbosky and adapted from R J Palacio’s novel – begins.

Chbosky has become something of a specialist in films about difference and social isolation. His excellent last feature, The Perks Of Being A Wallflower, from 2012, dealt with an awkward teenager struggling to settle in at high school, and he went on to write the screenplay for the definitive exemplar of the genre, Beauty And The Beast.

You can tell he’s on familiar ground as we watch ‘Auggie’ – who we know from his own narration is an intelligent, likeable and funny boy – struggling to gain acceptance. 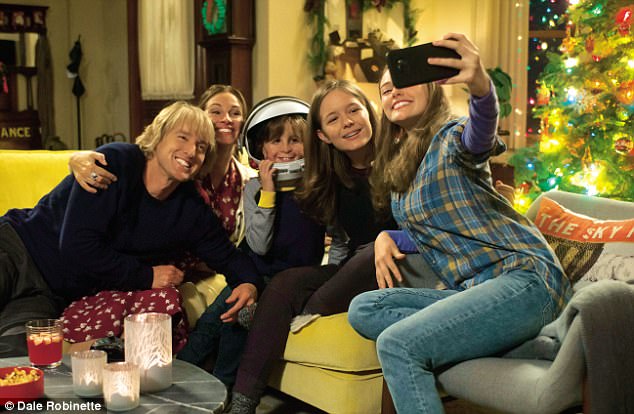 The casting of such Hollywood heavyweights as Roberts and Wilson hints at a film going all out for commercial success, but director Stephen Chbosky creates an art-house sensibility too

The result is slick, emotional and hugely watchable. The casting of such Hollywood heavyweights as Roberts and Wilson hints at a film going all out for commercial success, but Chbosky brings an art-house sensibility to proceedings too, breaking the story down into individual chapters and always ensuring his cast of characters are convincingly complex and fully rounded.

The sections dealing with Via – a teenager resigned to playing second fiddle in her August-dominated family and facing her own trials at high school – are particularly effective.

Every now and then, however, things get a little too polished. In a screenplay packed with nice lines, Via’s observation that her family is like the solar system (‘it revolves around the son, not the daughter’) smacks of a writer burning the midnight oil, while the contrived- feeling section dealing with her estranged best friend, Miranda, bears the hallmarks of a writer simply trying too hard.

But Chbosky draws great performances from his big guns. Roberts, who these days barely makes a film a year, is deliciously spot-on as a woman being pulled in umpteen emotional directions – look out for the heart-wrenching moment when Auggie makes his first friend. 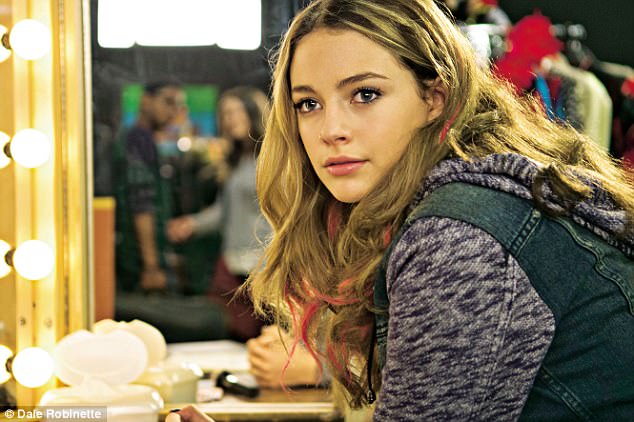 Every now and then, however, things get a little too polished; the section dealing with Via’s estranged friend (Danielle Rose Russell, above) bears the hallmarks of a writer trying too hard

And Wilson, an actor in serious need of a good performance, finds it here, albeit in the one slightly underwritten role and albeit delivering the sort of smart one-liners that most fathers dream of but never quite manage.

All that said, I did find it slightly disappointing, in a day and age when we are more accustomed to seeing disabled actors, that to play Auggie the excellent Tremblay is not only wearing prosthetics but prosthetics that, I’m reliably informed, are considerably less alarming than the ‘differences’ described in the book.

That may seem over-sensitive when I had no such trouble with John Hurt in The Elephant Man or Eric Stoltz in Mask, but times change and it does seem particularly at odds with a film that is all about integration, seeing the person within and acceptance.

Still made me cry, though.

The Man Who Invented Christmas (PG)

Back in 2003, a hastily assembled film crew spent several million dollars shooting a film about a San Francisco love triangle.

It was called The Room and was directed, written and produced by an exotically accented man called Tommy Wiseau, who also took the starring role.

It is, by all accounts, one of the worst films ever made but has, over the years, gained a cult following for its sheer creative ineptitude. 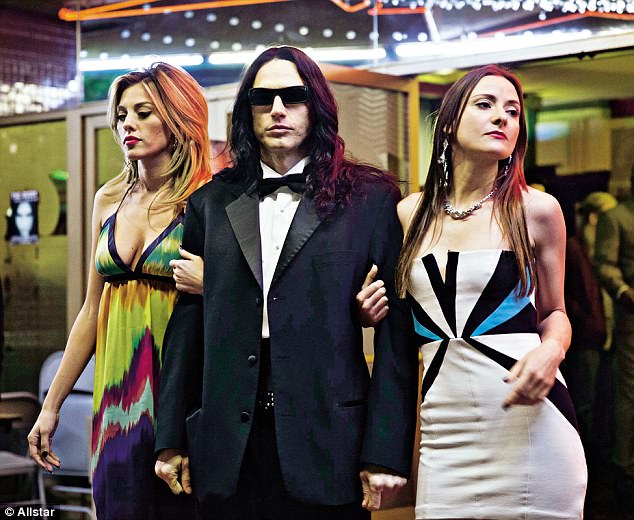 The Disaster Artist, which James Franco (above) directs and stars in, is the dramatised story of how cult film, The Room, came to be made. It has its moments but, not quite enough of them

The Disaster Artist, which James Franco merely directs and stars in, is the dramatised story of how The Room came to be made.

It has its moments but, for me, not quite enough of them, although a decent turn from Seth Rogen and a supporting cast that includes Sharon Stone, Judd Apatow and Melanie Griffith should help it at the box office.

The Man Who Invented Christmas is the rather frantic and over-imagined story of how Charles Dickens shrugged off three flops in a row and mounting financial worries to write that perennial Yuletide favourite A Christmas Carol.

Downton’s Dan Stevens gives it his best as the celebrated author without ever quite making the part his own.

Elsewhere, in a film conspicuous for its uneven and occasionally under-powered casting, Christopher Plummer is decent as Scrooge while it’s nice to see Simon Callow – an actor who has played Dickens on umpteen occasions – gracefully settling for the role of his illustrator, John Leech, this time.

Still, it’s a familiar tale and, as Dickens’s study fills with his own fictional characters, comparisons with The Muppet Christmas Carol are difficult to shake off.