With modern medicine finally confirming the long-held healing power of honey, which has been found to be more effective than antibiotics or over-the-counter medications in treating coughs and colds, it is a great time to plunder your kitchen cupboards and rummage through your fridge.

From easing eczema with porridge oats to whitening your teeth with sage and treating sore eyes with fennel, here the Mail reveals the other — sometimes very surprising — natural medicines at home.

Inhaling a bunch of fresh sage has been shown to help ease your levels of stress. It is also said to be very good at whitening teeth

Renowned for its healing properties since the Middle Ages, when it was thought to help protect against the plague, this herb really does have antiseptic and antimicrobial properties.

Not just this but research indicates that, whether you use it dried or fresh, it contains powerful natural compounds that could help protect against diseases such as Alzheimer’s and Parkinson’s, and using it in food may help to improve brain function and memory.

Meanwhile, just inhaling a bunch of fresh sage has been shown to help ease your levels of stress. It is also said to be very good at whitening teeth.

Simply pick a handful of fresh sage leaves, rinse with water, then crush them in your fingers. Apply the crushed leaves to your teeth and leave for two minutes, before rinsing with warm water.

Alternatively, boil a few sage leaves and use the cooled ‘tea’ to rinse the crushed leaves from your teeth.

TURMERIC TO ALLEVIATE PAIN IN YOUR JOINTS 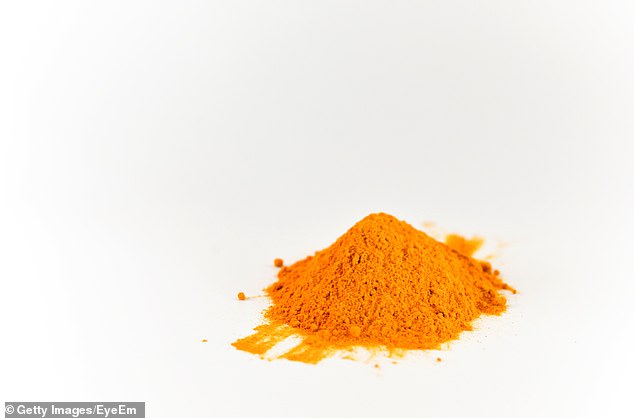 Studies suggest that as well as helping reduce joint pain, eating even small amounts of turmeric regularly may help prevent or slow down Alzheimer’s, possibly by helping prevent the brain plaques that lead to dementia

It is most effectively absorbed by the body when consumed with black pepper and some fat, so a curry recipe containing these ingredients would be ideal.

Because long-term, low-level inflammation plays a major role in almost every chronic Western disease, studies suggest that as well as helping reduce joint pain, eating even small amounts of turmeric regularly may help prevent or slow down Alzheimer’s, possibly by helping prevent the brain plaques that lead to dementia.

Cardamom pods impart a sweet, pungent flavour to food and the spice is known to soothe an upset stomach — even help to ease ulcers.

The seeds, oils and extracts of the spice are thought to have impressive medicinal properties and have been used in traditional medicine for centuries.

Now, modern laboratory studies have shown that cardamom can help fight inflammation, and suggest that it may protect against Helicobacter pylori, a bacteria linked to the development of most stomach ulcer issues.

PARSLEY TO STOP YOU FEELING BLOATED

Wasted as a mere garnish, fresh or dried parsley contains a powerful plant compound called apigenin which studies suggest could help reduce the risk of cancer by fighting damage to DNA.

It is also extremely high in vitamin K, and a good source of vitamin C, vitamin A, some folate (a B vitamin) and iron.

If you’re feeling bloated, parsley can be helpful because it acts as a natural diuretic, stimulating the kidneys to help you shed excess fluids. 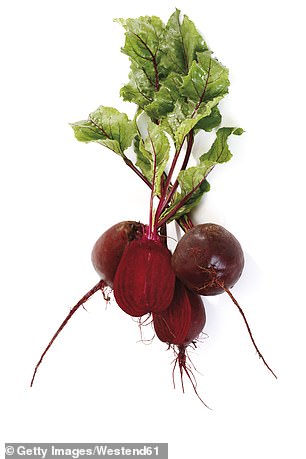 Beetroot juice has been shown to help lower blood pressure because the nitrates it contains are converted by the body to nitric oxide, which helps widen and relax the blood vessels, allowing the blood to flow more easily

BEETROOT TO GIVE YOU A BIG BOOST

Beetroot juice has been shown to help lower blood pressure because the nitrates it contains are converted by the body to nitric oxide, which helps widen and relax the blood vessels, allowing the blood to flow more easily.

The powerful nitrates found in beetroot juice increase blood flow to all parts of the brain and could even help fight dementia.

There are more nitrates in raw beetroot or juice than cooked beetroot and one study found that older people who regularly drank beetroot juice had better blood circulation in the frontal lobes of their brains (the area linked to degeneration from dementia).

These delicious aniseed-flavoured seeds are great to nibble as an after-dinner stomach soother, helping to relieve bloating, but fennel has also been traditionally used to soothe irritated, itchy eyes.

Pour boiling water over one teaspoon of fennel seeds or two fennel tea bags. Allow to cool and strain, then soak cotton wool pads with the fennel solution and apply to the eyes — using a separate pad for each eye to avoid cross-infection.

Extremely easy to grow, even in a window box, this delicious and hardy herb has been shown to boost concentration, memory and alertness when crushed in the hand and inhaled. Fresh rosemary contains the compound cineole, which could help boost brain activity.

The active ingredient in rosemary (rosmarinic acid) can help suppress allergic responses and nasal congestion, and when brewed as a tea it has been shown to help treat upset stomach and nausea, too.

AWESOME OATS TO SEE OFF EXCEMA 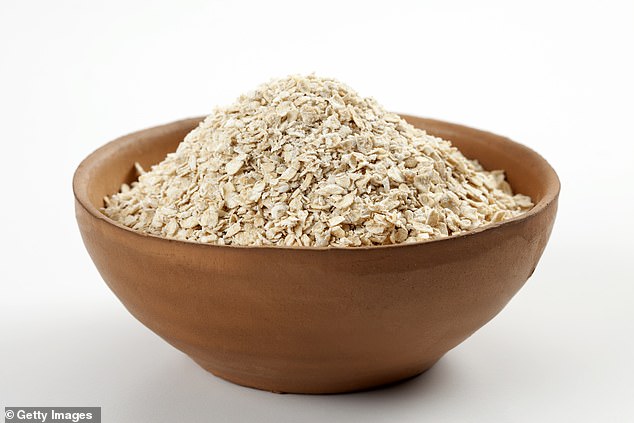 They also contain compounds called saponins, which are natural cleansers. They help gently remove the dirt and oil that can clog the pores, and also exfoliate the skin.

Tie a handful of porridge oats mixed with a few dried chamomile flowers (cut open a camomile tea bag) in a muslin square and let it soak in a warm bath, squeezing the bag to release the milky liquid, then use the bag as a gentle exfoliator on your skin.

The milky oat water also has a gentle moisturising effect that can help calm dry and itchy skin or eczema. 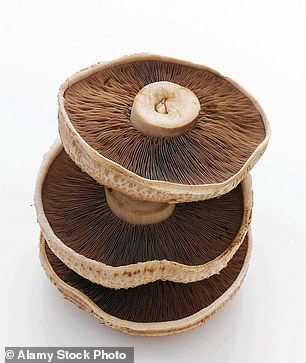 In the absence of sunshine, one of the best natural sources is mushrooms — but only if you leave them on a sunny windowsill before you eat them

MUSHROOMS TO GIVE GOOD IMMUNITY

One reason some people are at greater risk of complications from Covid-19 is believed to be low levels of vitamin D.

In the absence of sunshine, one of the best natural sources is mushrooms — but only if you leave them on a sunny windowsill before you eat them.

This is because exposing mushrooms to sunlight infuses them with vitamin D, which remains even after they’re cooked, and helps ensure strong immunity.

Arrange your mushrooms ‘bottoms up’ (so the ‘gill tissue’ on the underside of the caps is exposed) on a sunny windowsill for an hour (the process works for frozen and even dried mushrooms, too).

It appears to improve immune response to infection by stimulating the production of killer T-cells (the foot soldiers of your immune system that seek out and destroy infected cells).

One Australian study found eating a portion of cooked button mushrooms every day is enough to boost your protection against viruses by as much as 50 per cent.

Although green tea is a popular health drink rich in antioxidants, it can also protect against cavities, gum disease and bad breath.

In fact, when cooled, green tea makes a great mouthwash because it inhibits the bacteria responsible for mouth odour and has an anti- inflammatory effect which helps to soothe sore gums.

Researchers at the University of British Columbia measured the level of smelly compounds in people’s mouths after they were given green-tea powder and found it outperformed mints and chewing gum when it came to freshening breath.

GARLIC TO WARD OFF A HEART ATTACK 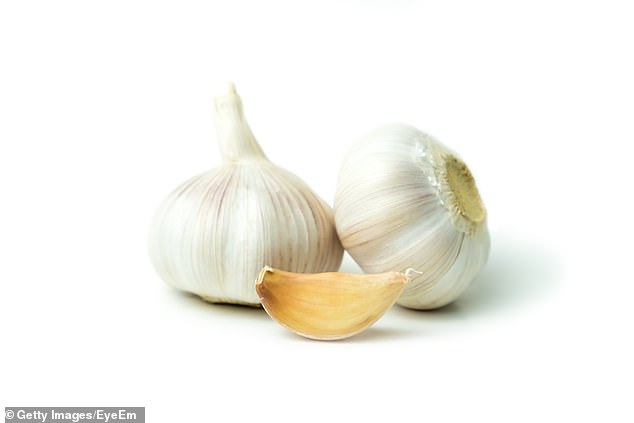 Several studies suggest that garlic makes platelets (the cells involved in blood clotting) less likely to clump together and stick to artery walls, therefore acting as an anticoagulant and reducing the risk of heart attacks

Several studies suggest that garlic makes platelets (the cells involved in blood clotting) less likely to clump together and stick to artery walls, therefore acting as an anticoagulant and reducing the risk of heart attacks.

The active ingredient is a compound called allicin, which is released by the plant in response to damage — so it is believed to be most effective if it is chopped or crushed 20 minutes before use.

The allicin is reduced in power by the cooking process, so raw garlic has the most potent blood-thinning effect.

In fact, it has 13 times the blood-thinning powers of onions — and it is worth keeping a little aside to sprinkle on top in raw form before serving.

Be warned, however. If you have a bleeding disorder or are taking blood-thinning medication — talk to your doctor before increasing your garlic intake.

The allicin in garlic is also believed to help boost your immunity.

Studies certainly show that taking garlic supplements for three months is enough to reduce your risk of catching a cold by 63 per cent and reduce the length of a cold (if you do catch one) by 70 per cent (from five days to just 1.5 days).

One other compound found in garlic, diallyl sulfide, has been shown to act as a powerful antibiotic, useful in the fight against fighting the Campylobacter bacterium, which is a common cause of intestinal infections and diarrhoea.

In fact, garlic has such a long history of use as an infection fighter against viruses, bacteria and fungi, it has been referred to as ‘Russian penicillin’ because it was often used as a medicine there in World War II. 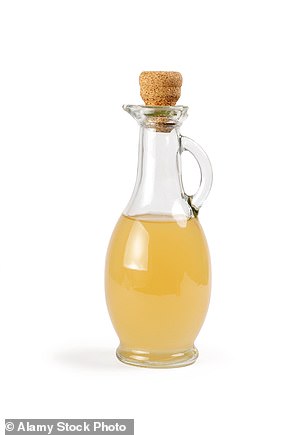 Olive oil, now a firm fixture on every healthy kitchen’s counter top, universally lauded for its cancer- and heart-disease-fighting properties and enjoyed in abundance in a wide variety of dressings and sauces, could, not very many years ago, only be bought in small bottles from the chemist

PINEAPPLES TO PICK YOU UP AFTER AN OP

Pineapples contain a group of digestive enzymes called bromelain which help to break down protein molecules in the gut, making them more easily absorbed.

Bromelain is so effective at breaking down meat proteins it is often used as a commercial meat tenderiser.

That is one reason why eating too much pineapple in one sitting can make the inside of your mouth feel tender and sore.

However, studies have shown that bromelain may reduce the inflammation, swelling, bruising and pain that can occur after surgery, having a similar effect to over-the-counter anti-inflammatory drugs, so reducing the time it takes to recover from surgery or intense exercise.

YOGHURT TO LOOK AFTER YOUR GUT

No need to spend money on probiotics when you choose ‘live’ yoghurt. The bacteria used to make yoghurt works by fermenting lactose, the natural sugar found in milk.

This process produces lactic acid, a substance that causes milk proteins to curdle, giving yogurt its flavour and texture.

This live bacteria is much loved by the healthy bacteria in your intestines, helping to protect you against disease.

To ensure your yoghurt contains effective probiotics, look for one with active cultures listed on the label (which can often be lost during the pasteurisation process).

Even if you are lactose intolerant (you struggle to digest the lactose in milk and cream), you might find dairy yoghurt does not cause problems.

This is because some lactose is broken down during production, and the probiotics in the yoghurt will help assist digestion.

It might be hard to believe that olive oil — now a firm fixture on every healthy kitchen’s counter top, universally lauded for its cancer- and heart-disease-fighting properties and enjoyed in abundance in a wide variety of dressings and sauces — could, not very many years ago, only be bought in small bottles from the chemist.

And was usually kept in the medicine cabinet as a cure for earache.