A witness has described the fiery aftermath of the horror eight-car collision that killed a young teenager and seriously injured several others.

Two vehicles went up in flames in Woodbine, south-west of Sydney, just after 7pm on Good Friday.

Alan Charlton told Daily Mail Australia he heard the sirens and fire trucks blasting their horns before he went outside to find the nightmare pile-up.

‘It was horrific … quite a lot were injured,’ he said.

‘People were getting treatment everywhere – they seemed to be mainly 60 to 100 metres apart on the median strip area. 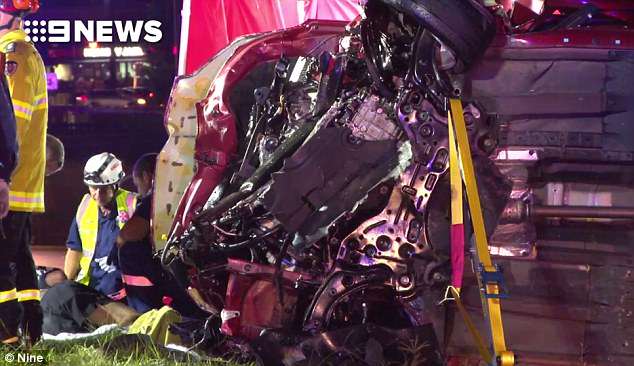 ‘Then going across the road to the other side, there were another lot scattered everywhere getting treatment from medical staff.’

Mr Charlton said he thought all of the cars involved would have been write offs including one car that he believed hit a pole.

‘The light pole was bent over and bent in a number of spots it had turned into a boomerang,’ he said.

‘One of the vehicles must have been airborne to have hit so high up on the pole.’

One red station wagon was left at the intersection and had been ‘ripped open’.

‘You could see this piece of red metal hanging out the back,’ Mr Charlton told Daily Mail Australia Saturday morning.

While a number of people received treatment before being either airlifted or driven to hospital, Mr Charlton said people were being treated all over Cambelltown Road.

An 18-year-old man was a passenger in the Kia Sportage and died at the scene, NSW Police said.

The teenager was given CPR at the scene but could not be saved. 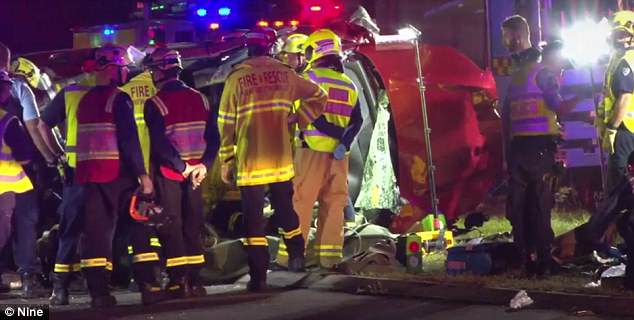 A helicopter was brought in to airlift those seriously injured while others were rushed to hospital by road.

The other four people in the Kia Sportage – the 57-year-old male driver, two men aged 19 and 20 and a woman, 18, were all seriously injured.

The four passengers were hospitalised and have had surgery where they are in stable conditions.

Witnesses were able to free a man, 26, from the blue Commodore.

The 26-year-old was taken to Liverpool Hospital for surgery for internal injuries.

Three people were in the Commodore wagon driven by a man, 69, but only one female passenger was injured.

The remaining people involved in the crash – four women and two men – were assessed at the scene by paramedics before being taken to hospital.

They included a woman, 45, driving the Toyota Yaris, a woman, 35, driving a Nissan X Trail, a woman, 21 driving the Ford Mondeo, a man, 54, driving the Santa Fe and a man and a woman both aged 26 who were travelling in the Mitsubishi.

Investigators are still determining the cause of the tragic pile-up.