Woody Allen ripped into his son, the investigative journalist Ronan Farrow, on Friday calling his work ‘shoddy’ and questioning whether his credibility will last.

Allen, 84, claimed that he has changed his mind on his son’s journalism and now believes it may not be ‘ethical or honest’.

‘Up until a couple of days ago I would have said “Gee, this is great, he’s done some good investigative journalism and more power to him, I wish him all the success in the world”,’ the director said about Farrow in an interview Friday with the UK’s Telegraph.

‘But now it’s come out that his journalism has not been so ethical or honest.’ 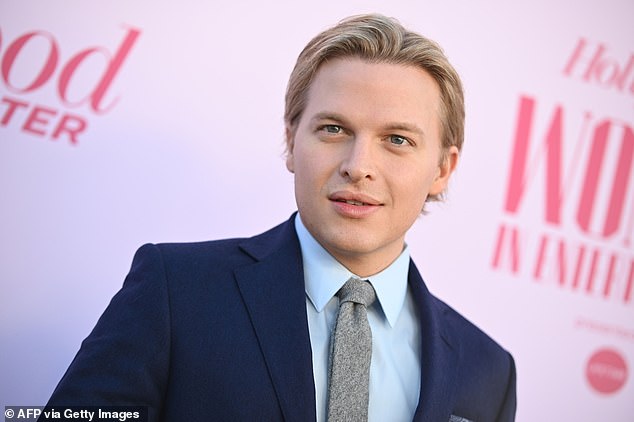 The director, 84, claimed he had always believed son Ronan Farrow (pictured) would ‘not be an honest journalist in relation to me at all’ as he is loyal to his mother Mia Farrow

The director was referring to a recent column from the New York Times that criticized Farrow’s work and said it ‘delivers narratives that are irresistibly cinematic — with unmistakable heroes and villains … [and] often omits the complicating facts and inconvenient details that may make them less dramatic’.

Allen and Farrow, 32, are estranged. The journalist has accused Allen of molesting his sister, Dylan Farrow.

‘Now, I found him to not be an honest journalist in relation to me at all, but I write that off because, you know, I understand he’s loyal to his mother,’ Allen said, referring to his former wife Mia Farrow.

‘But now people are beginning to realize that it isn’t just in relation to me that his journalism has been kind of shoddy, and I’m not so sure that his credibility is going to last.’

Farrow, who won the Pulitzer Prize for his work in breaking the Harvey Weinstein #MeToo scandal, has stood by his investigative work.

Allen is currently on the interview circuit promoting his new book Apropos of Nothing.

On Friday, he also hit back at Hollywood stars who denounced him for alleged child abuse against Dylan.

The director said criticizing him became ‘the fashionable thing to do, like everybody suddenly eating kale’.

Stars including Mira Sorvino, Greta Gerwig, Colin Firth and Rebecca Hall have all since distanced themselves from the acclaimed filmmaker after working with him. 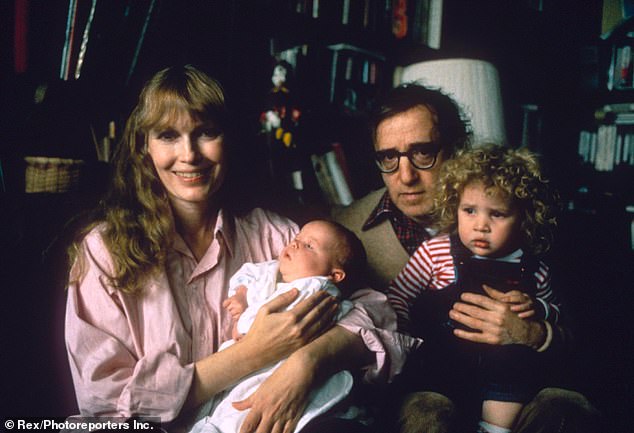 Woody Allen pictured with his former wife Mia Farrow and their children Dylan and Ronan in 1988. The director as been accused of sexually assaulting his daughter Dylan 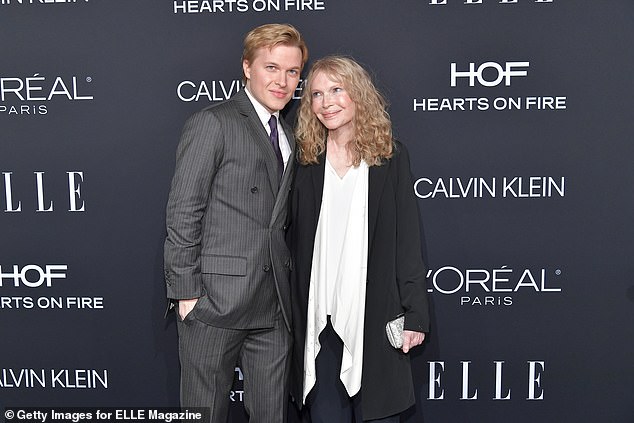 Allegations against Allen were brought back into the public eye by journalist Ronan Farrow, who has supported his mother and sister’s claims (pictured here with mother Mia Farrow). Allen hit out at his son’s work in exposing sexual assault claims in Hollywood on Friday

They did so after the #MeToo movement brought a renewed focus on allegations that the Oscar-winning star sexually assaulted his adoptive daughter Dylan, which he vehemently denies.

Allen told the Guardian: ‘It’s silly. The actors have no idea of the facts and they latch on to some self-serving, public, safe position.

‘I assume that for the rest of my life a large number of people will think I was a predator.’

In 1992, it emerged that Allen, then aged 57, was having an affair with his partner Mia Farrow’s adoptive daughter Soon-Yi Previn, then aged 21.

After the scandal broke, Farrow and Allen had an acrimonious and public break up, during which she accused the venerated director of sexually assaulting their adopted daughter, Dylan, seven. 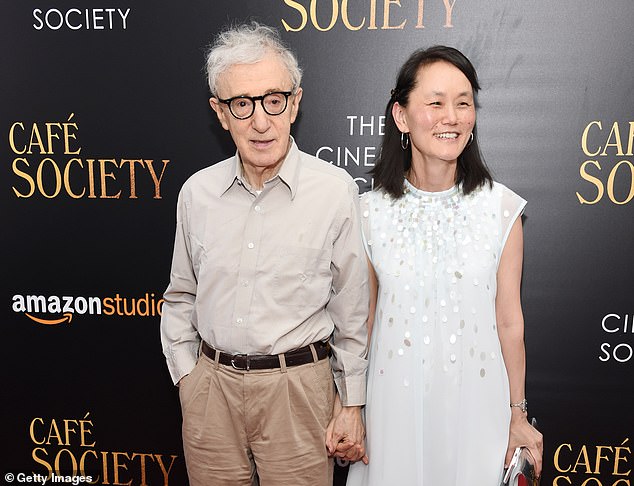 Fighting back: Woody Allen has responded to Hollywood actors who have denounced him, saying they are only doing so because it is ‘fashionable’. Pictured with wife Soon-Yi Previn

Allen was investigated but never charged and he has vehemently maintained his innocence ever since.

The allegations were brought again into the public eye with the #MeToo movement as Ronan supported his sister Dylan’s and mother Mia’s abuse claims.

The director is promoting his new book Apropos of Nothing in which he outlines his innocence and his reaction to the public and Hollywood furor.

In it, he recounts how Timothee Chalamet denounced Allen to better his chances of winning an Oscar.

He directed the young star Chalamet in A Rainy Day In New York, which was filmed in the latter part of 2017 and before Chalamet’s Academy Award nomination in January 2018 for the movie Call Me By Your Name.

In his autobiography, Allen says: ‘Timothée afterward publicly stated he regretted working with me and was giving the money to charity.

‘But he swore to my sister he needed to do that as he was up for an Oscar for Call Me by Your Name, and he and his agent felt he had a better chance of winning if he denounced me, so he did.’

Chalomet has not commented on the claims.

Allen’s memoir was released in April after a delay because the original publisher backed out of releasing the book following protests led by Ronan Farrow.