As Woody Allen’s family drama continues to unfurl before the public’s eyes, the director has proclaimed he should be the ‘poster boy’ for the #MeToo movement.

Allen’s daughter Dylan Farrow has maintained for decades that he sexually abused her when she was seven years old.

And while a number of high-profile actors proclaimed they would never work for him again as the #MeToo movement picked up steam, Allen seems undeterred.

‘I should be the poster boy for the #MeToo movement,’ he told Argentinian news program Periodismo Para Todos.

‘I have worked in movies for 50 years. I’ve worked with hundreds of actresses and not a single one – big ones, famous ones, ones starting out – have ever suggested any kind of impropriety at all.’

Woody Allen has proclaimed that he should be the ‘poster boy’ for the #MeToo movement, despite the fact that his own daughter has maintained that he sexually abused her 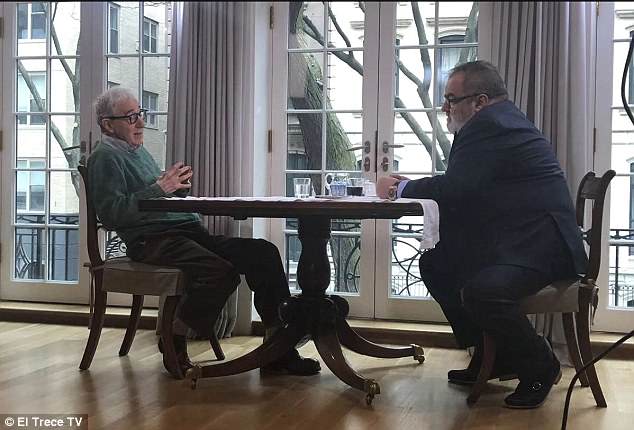 During an interview with Argentinian news program Periodismo Para Todos (pictured), Allen said it ‘bothers’ him that he is linked with Harvey Weinstein amid the #MeToo movement

‘I’ve always had a wonderful record with them.’

Allen said he believes it’s unfair that he has been linked with the likes of Harvey Weinstein, who has been accused of sexual assault by more than 80 women, since the movement began.

‘What bothers me is that I get linked in with them,’ he said. ‘People who have been accused by 20 women, 50 women, 100 women of abuse and abuse and abuse.’

‘And I, who was only accused by one woman in a child custody case which was looked at and proven to be untrue, I get lumped in with these people.’

Allen said he was ‘distressed’ that Dylan Farrow’s accusations have made headlines again amid the #MeToo movement. 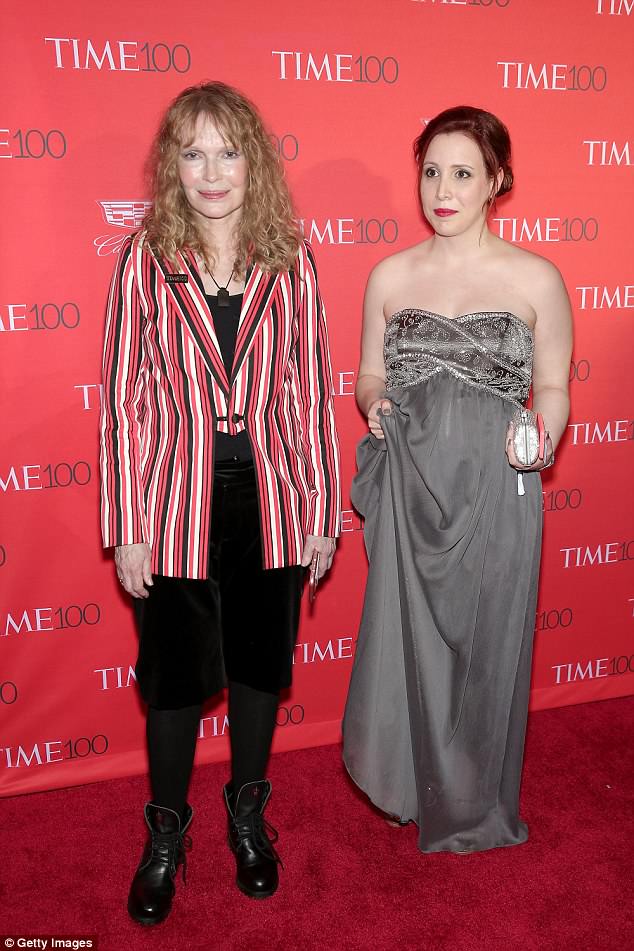 Dylan Farrow has maintained for decades that he sexually abused her when she was seven years old. He claims his ex-partner Mia Farrow (pictured with Dylan) coached her to say it 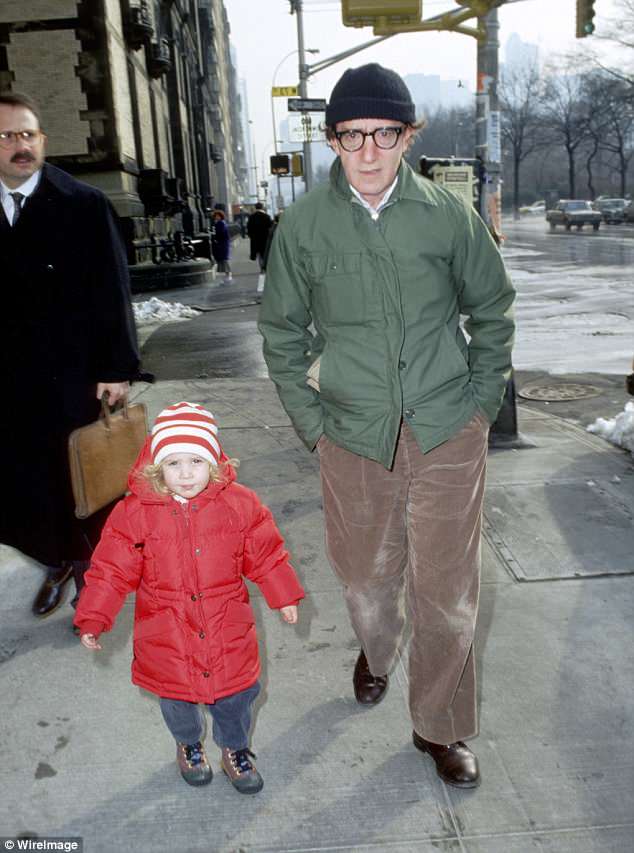 Allen said he was ‘distressed’ that Dylan Farrow’s accusations have made headlines again amid the #MeToo movement. The pair are pictured here together in 1988

‘I think in any situation where anyone is accused of something unjustly, this is a sad thing,’ he said.

‘This is something that has been thoroughly looked at 25 years ago by all the authorities and everybody came to the conclusion that it was untrue.’

‘And that was the end and I’ve gone on with my life. For it to come back now, it’s a terrible thing to accuse a person of.’

‘I’m a man with a family and my own children. So of course it’s upsetting.’

Farrow’s accusations made headlines again when she called out actresses who showed public support for the Time’s Up initiative but still worked with Allen.

‘I fully support women taking a stand, linking arms with other women (and men), advocating on behalf of one another to effect change not only in the entertainment industry but in the world at large,’ Farrow said in a statement. 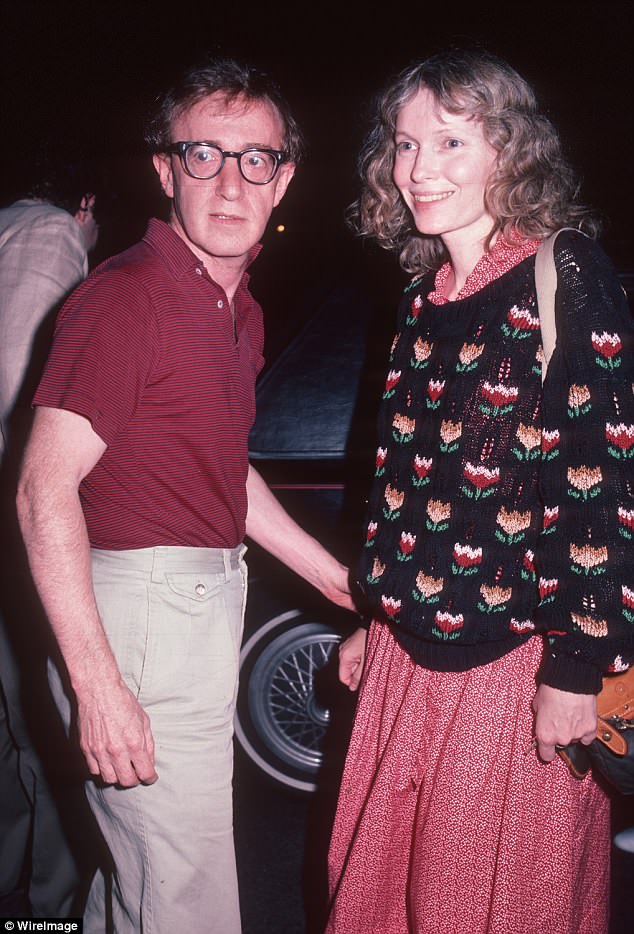 Dylan’s accusations first came out during an ugly custody battle after Allen and Mia broke up. The pair are pictured here in 1985

‘That is an admirable and worthwhile objective, I hope these women change the world.’

‘That said, the people who join this movement without taking any kind of personal accountability for the ways in which their own words and decisions have helped to perpetuate the culture they are fighting against, that’s hard for me to reconcile.’

Celebrities including Colin Firth, Mira Sorvino, Timothée Chalamet, and Michael Caine have since said they regretted working with Allen in the past.

Penelope Cruz, who starred in two of Allen’s films, told Vanity Fair that the decades-old allegations should be revisited.

‘The only answer that I can give you with common sense that is not about a headline is, the case has to be looked at again,’ said Cruz, who worked alongside Allen on the set of Vicky Cristina Barcelona.

Cruz’s husband, Javier Bardem, who starred alongside his wife on the same film, came out in support of Allen and said he was not ashamed of working with him.

Bardem told Paris Match that he had ‘doubts’ about the allegations against Allen.

And the drama from the 25-year-old accusation has only continued thanks to a recent letter Allen’s son wrote in defense of his father.

Moses Farrow wrote a detailed blog post insisting that Allen did not molest Dylan and accusing their mother of being abusive and manipulative.

Just a few months later, Mia and Woody ended their 12-year relationship after it emerged that the filmmaker was having an affair with Mia’s adopted daughter Soon-Yi Previn, who is 35 years his junior.

During a bitter custody battle that ensued between Mia and Allen, allegations arose that the Manhattan director sexually assaulted Dylan when she was seven years old. 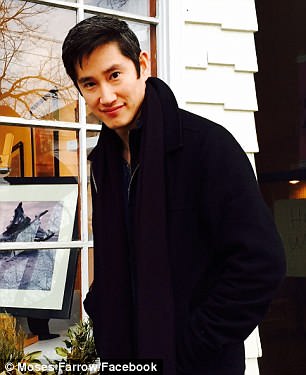 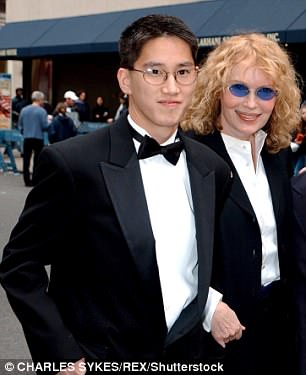 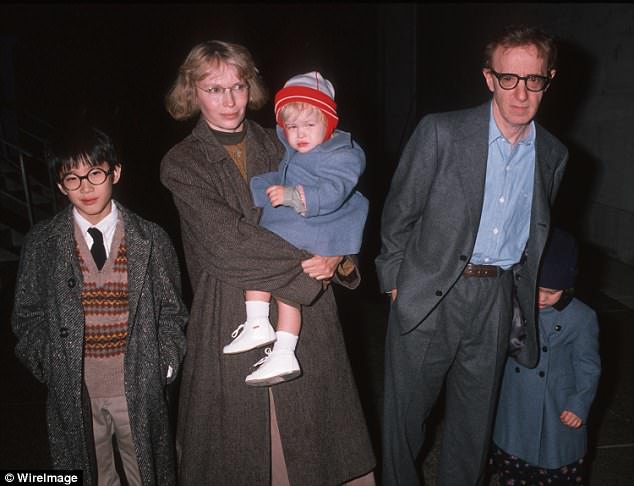 Moses is pictured with his adoptive mother, father and two siblings in 1989 – just three years before the couple’s scandalous split

Allen, who went on to marry Previn in 1997, was investigated over the rape claims but was never charged. He has repeatedly denied the allegations.

Farrow won custody of the couple’s three children, and Allen was stripped of visitation rights with Dylan.

Moses, who now works as a therapist, writes that on August 4, 1992 – the day of the alleged assault – he was present in the family’s country house in Bridgewater, Connecticut, and that Allen was never allowed to be alone with Dylan.

‘Along with five kids, there were three adults in the house, all of whom had been told for months what a monster Woody was,’ he writes. ‘None of us would have allowed Dylan to step away with Woody, even if he tried.’

In her 2014 open letter published in the New York Times, which opened Allen to a new round of scrutiny, Dylan, now aged, 32, described in detail the alleged rape in the attic.

‘He told me to lay on my stomach and play with my brother’s electric train set,’ she recalled.

‘Then he sexually assaulted me. He talked to me while he did it, whispering that I was a good girl, that this was our secret, promising that we’d go to Paris and I’d be a star in his movies.’ 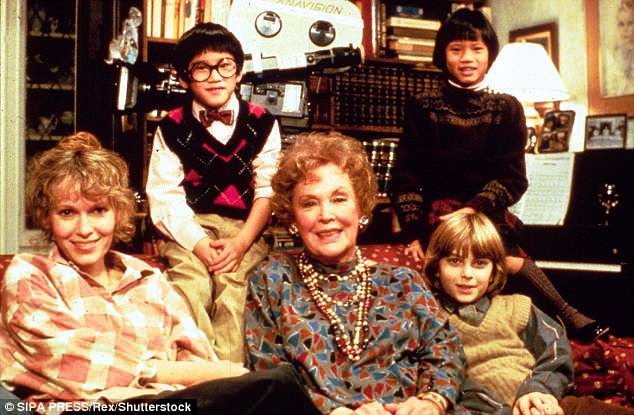 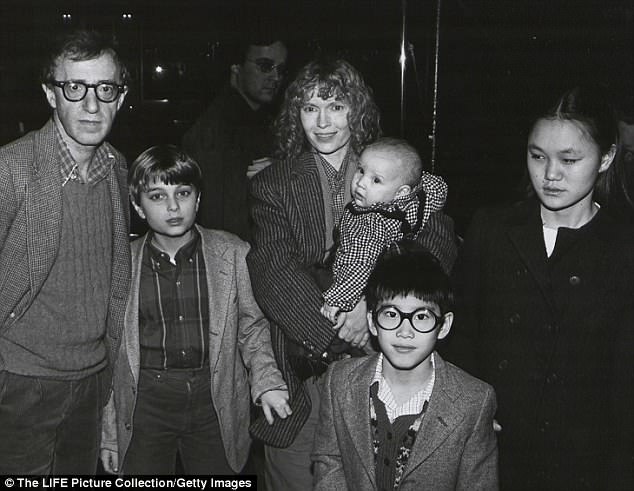 Moses (pictured in glasses), insisted that Allen (far left) did not sexually assault his sister Dylan (pictured in Mia’s arms) in 1992 when she was seven years old

‘I remember staring at that toy train, focusing on it as it traveled in its circle around the attic. To this day, I find it difficult to look at toy trains.’

But according to Moses, Dylan’s vivid narrative is riddled with falsities. He claimed there was no electric train in the attic because it was a cramped, unfinished crawl space where the children were not allowed to play.

‘The idea that the space could possibly have accommodated a functioning electric train set, circling around the attic, is ridiculous,’ Moses writes.

In his account, Moses reserves his most withering scorn for his estranged mother, whom he describes as physically and emotionally abusive, controlling and calculating.

He recounts one incident that happened between the first and second grade, in which Farrow allegedly slapped him across the face because she suspected that he took a tape measure, and then forced him to issue an apology, which he said she made him rehearse a dozen times. 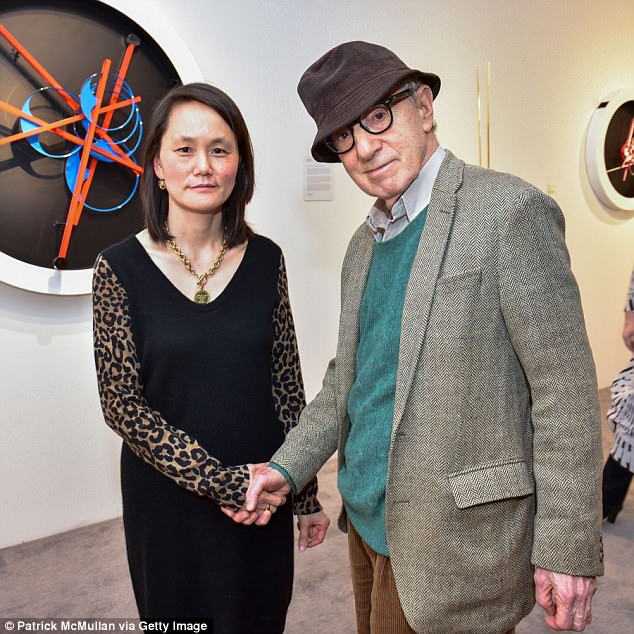 Allen began an affair with Mia’s adopted daughter Soon-Yi Previn and married her in 1997. The pair are pictured here in February

‘That was the start of her coaching, drilling, scripting, and rehearsing – in essence, brainwashing,’ he said of Mia.

In another instance, Moses claimed his mother dragged him into the bathroom and ‘hit me uncontrollably all over my body’ after a dispute over curtains, which she claimed Moses had closed against her wishes.

‘I was defeated, deflated, beaten and beaten down. Mia had stripped me of my voice and my sense of self,’ he writes.

Moses said he was not the only target of Mia’s wrath, claiming she would drag his siblings, some of whom were disabled, down a flight of stairs and lock them in bedrooms or closets as punishment for minor transgressions.

He said Soon-Yi, who had an independent streak, was Mia’s favorite scapegoat, and that one time when she was young, their mother hurled a porcelain centerpiece at her head. 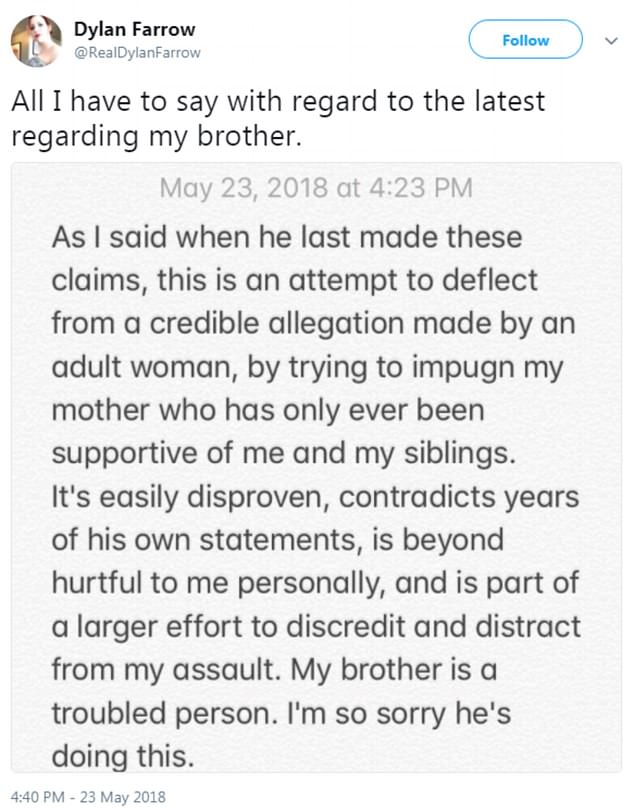 Dylan Farrow responded to her brother’s essay on Twitter, calling him a ‘troubled person’

The thrust of Moses’ post, which reprises some of the claims that he made last year during conversations with a Woody Allen biographer Eric Lax, is that Mia Farrow, now aged 73, coached and brainwashed Dylan into falsely accusing Allen of molesting her in order to win the custody battle and get revenge for his affair with Soon-Yi.

At the conclusion of his essay, Moses addresses the actors who he says have rushed to condemn his father ‘based on a discredited accusation’ out of fear of being on the wrong side of the #MeToo movement.

‘I was there – in the house, in the room – and I know both my father and mother and what each is capable of a whole lot better than you,’ he writes.

To his sister Dylan, he wished peace and ‘wisdom to understand that devoting your life to helping our mother destroy our father’s reputation is unlikely to bring you closure in any kind of lasting way.’

Dylan Farrow responded to her brother’s latest statements defending their father on Wednesday afternoon, calling him a ‘troubled’ person.

‘As I said when he last made these claims, this is an attempt to deflect from a credible allegation made by an adult woman, by trying to impugn my mother who has only ever been supportive of me and my siblings,’ she said. 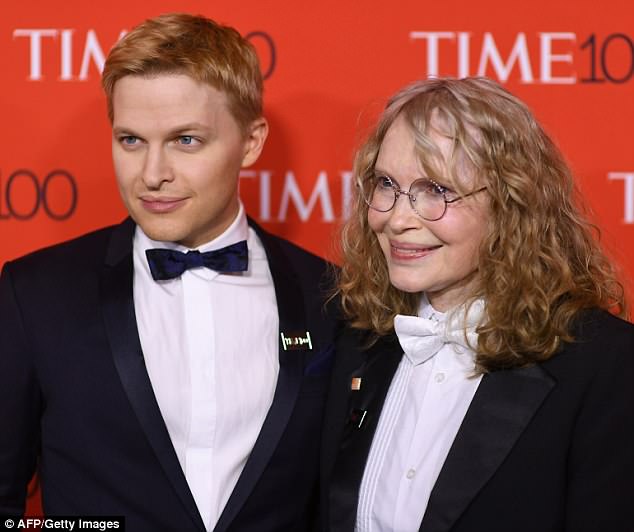 Ronan Farrow, 30, also defended his mother and sister in a statement posted to Twitter 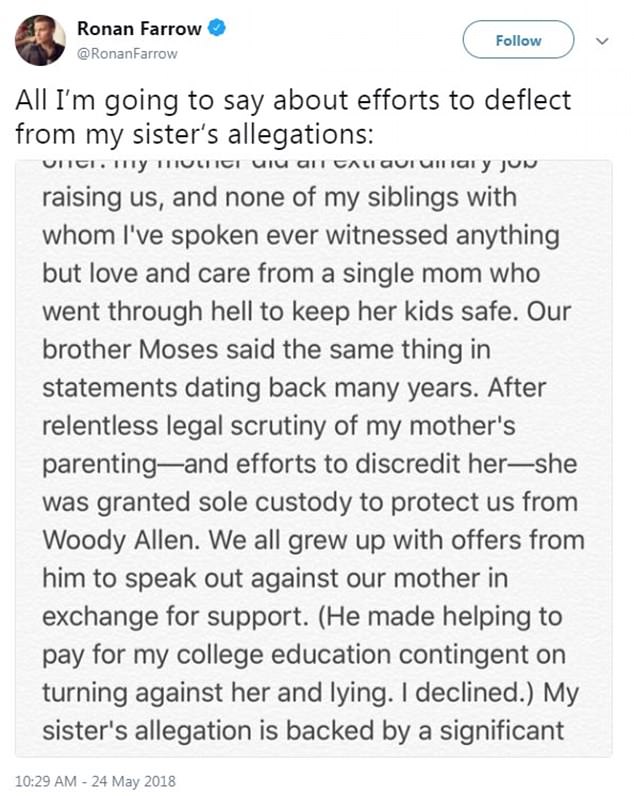 In a statement posted to Twitter, Farrow called Moses’ letter part of a ‘repeated campaign to discredit my sister’ 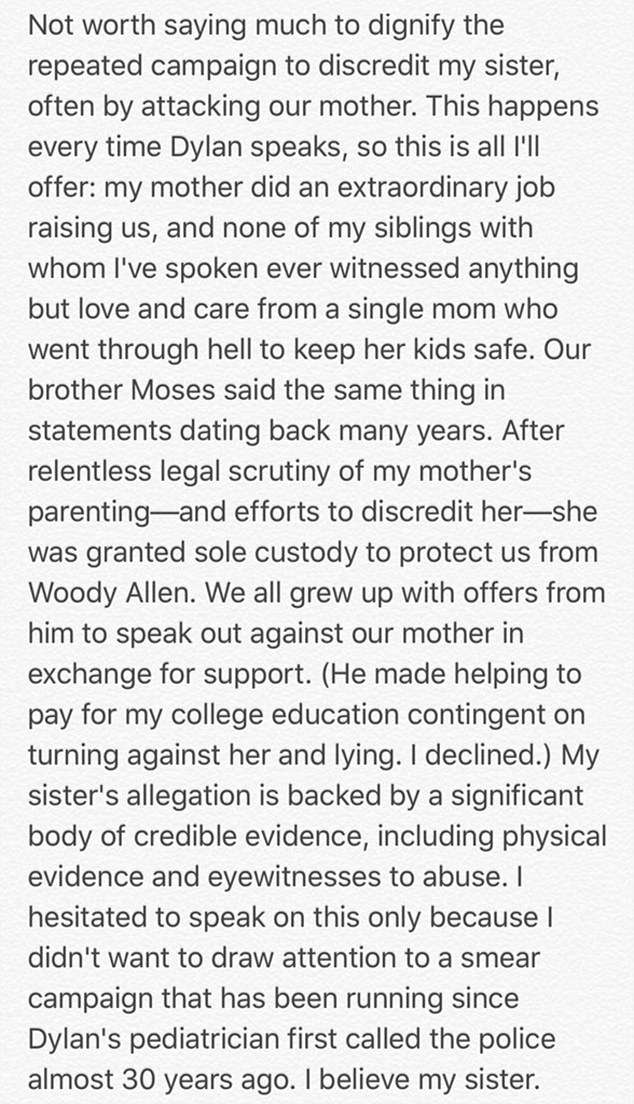 ‘It’s easily disproven, contradicts years of his own statements, is beyond hurtful to me personally, and is part of a larger effort to discredit and distract from my assault.

‘My brother is a troubled person. I’m so sorry he’s doing this.’

‘This happens every time Dylan speaks, so this is all I’ll offer: My mother did an extraordinary job raising us, and none of my siblings with whom I’ve spoken ever witnessed anything but love and care from a single mom who went through hell to keep her kids safe,’ he wrote.

‘Our brother Moses said the same thing in statements dating back many years. After relentless legal scrutiny of my mother’s parenting—and efforts to discredit her—she was granted sole custody to protect us from Woody Allen.’

‘We all grew up with offers from him to speak out against our mother in exchange for support. (He made helping to pay for my college education contingent on turning against her and lying. I declined.) I believe my sister.’