The US Ambassador to the UK has insisted the ‘special relationship’ between Boris Johnson and Donald Trump will be ‘sensational’.

Woody Johnson said the two men ‘have so much more in common’ as he predicted a bright future for Britain and the US.

He also heaped pressure on the European Union after he said trade talks between London and Washington would start immediately in the event of a No Deal Brexit.

Mr Johnson said if Britain crashed out of the EU on October 31 without an agreement it would not stop the US entering formal discussions with the UK.

His comments came amid rising fears in the EU of a Brexit ‘Cold War’ after the new Prime Minister ramped up his rhetoric and demanded the ‘abolition’ of the Irish border backstop from any divorce deal.

Brussels responded with fury and said the new premier’s demands were ‘unacceptable’ as the likelihood of a bad break on Halloween increased.

The EU is now contemplating the possibility that Britain will not bow to pressure and that a No Deal Brexit could create a Iron Curtain-style divide between the bloc and Britain. 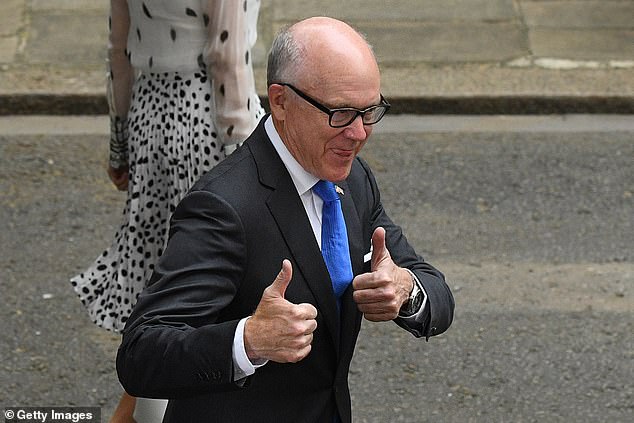 Woody Johnson, the US Ambassador to the UK, said today he believes Donald Trump and Boris Johnson will have a ‘sensational’ relationship 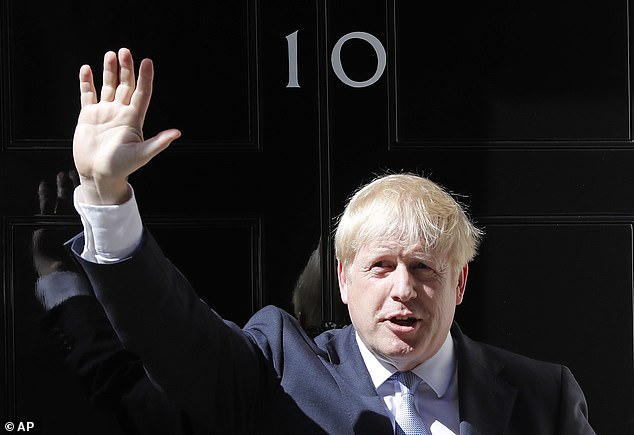 Mr Johnson’s comments represent a major boost to his namesake, the new Prime Minister (pictured on Wednesday when he took office), because they suggest the US will help the UK pick up the pieces in the event of a No Deal split

The US Ambassador said this morning that the White House would not need to know the future terms on which the UK would trade with the EU in order to start work on a cross-Atlantic agreement –  a major No Deal win for the new PM.

‘No, I don’t think that’s imperative. I think if you have a No Deal Brexit you can still negotiate trade deals with other countries.’

Asked if a No Deal split would actually help the chances of the US and Britain striking a free trade agreement, Mr Johnson told the BBC: ‘That I would leave to the expert trade negotiators.

‘You are going to have to deal with the situation as it exists.’

Relations between the US and Britain deteriorated after leaked diplomatic memos showed Sir Kim Darroch, the UK’s man in Washington, had called Mr Trump ‘inept’.

Sir Kim resigned in the aftermath of the leak and Mr Johnson is now determined to reset the relationship.

The US Ambassador was asked what sort of relationship he envisaged between Mr Trump and the new Prime Minister and he replied: ‘I think it is going to be sensational.’

He continued: ‘The UK is our most important ally both in security and also prosperity.

‘So you are very important and he knows that and he has made some comments regarding a free trade agreement and putting the UK at the front of the line.

‘He has made this comment many, many times. In fact when he was over here a month ago he talked about the free trade agreement and how it would benefit both countries.’

Brexiteers believe a US trade deal would bring tremendous economic benefits to the UK and have hailed it as one of the great prizes of leaving the EU.

But critics believe a deal would not come close to replicating the existing benefits of the UK’s current EU membership and there are also major concerns about what the price of such an agreement could be. 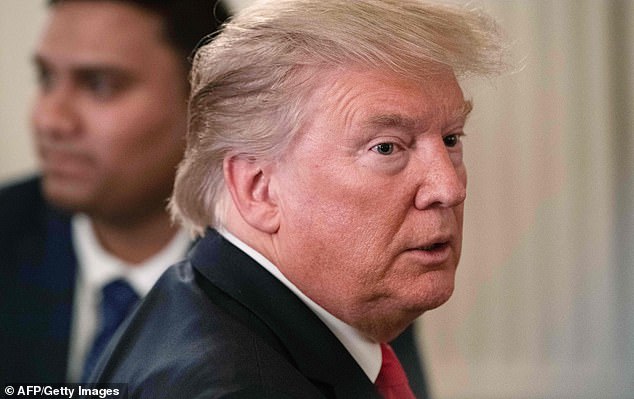 Mr Trump, pictured in the White House yesterday, has repeatedly said he wants the US and UK to strike a free trade deal

Some believe Washington could demand the UK lower its animal welfare standards to allow the import of chlorine-washed chicken or let US healthcare providers bid to run parts of the NHS.

Nancy Pelosi, the speaker of the US House of Representatives and the most senior elected Democrat, warned no trade deal would be agreed by Congress if Brexit damaged the Good Friday Agreement.

She told the Irish Times: ‘We made it clear in our conversations with senior members of the Conservative Party earlier this year that there should be no return to a hard border on the island. That position has not changed.

‘Any trade deal between the US and Great Britain would have to be cognisant of that.’

According to The Times, German Chancellor Angela Merkel has told friends she believes No Deal could create an Iron Curtain-style divide between the EU and UK.

There are concerns that the Brexit blame game could escalate quickly if the UK leaves without a deal and refuses to pay the £39 billion divorce bill – something the new PM has hinted at.

France has previously been adamant that economic chaos from crashing out would force the UK back to the table within weeks.

But that wisdom is starting to be questioned after Mr Johnson’s bullish start to his premiership.

Diplomats are anxious that Mr Trump would wade in on the UK’s side, potentially leading to a protectionist trade war spiralling out of control.

Mr Johnson laid down the gauntlet to Brussels yesterday on the first full day of his time in Number 10 as he said he would not agree a deal with the EU containing the backstop.

He told MPs: ‘A time limit is not enough. If an agreement is to be reached it must be clearly understood that the way to the deal goes by way of the abolition of the backstop.’

Michel Barnier, the EU’s chief Brexit negotiator, described the demands as ‘unacceptable’ while Jean-Claude Juncker told Mr Johnson during a phone call yesterday afternoon that the current deal was the best and only one available.

The backstop was included in the original Brexit deal as a last resort measure to be used in the event no overall trade deal has been struck by the two sides by the end of the transition period.

It would effectively see existing EU rules on customs kept in place to ensure frictionless trade on the island of Ireland could continue and prevent the return of a hard border.

But Brexiteers hate it because if implemented it would last indefinitely, restrict the UK’s ability to strike its own trade deal and getting out of it would require the agreement of both sides.

The US Ambassador also insisted that Mr Trump was unlikely to hold a grudge over Mr Johnson’s previous criticisms of the president.

In 2015, the then-London Mayor accused Mr Trump of ‘stupefying ignorance’ and of being ‘unfit’ for the White House when the then-presidential candidate called for a ban on Muslims entering the US.

‘And he will comment on injustices or inabilities or how he sees it and I think he respects Boris for the same. Boris is going to call it as he sees it.

‘I think they have so much more in common in terms of what they want to accomplish for the good of both of our nations.’