Shopper furious after Woolworths supermarket cashier refuses to pack his bags at the staffed checkout: ‘Is this normal?’

An Australian shopper has been left outraged after a Woolworths worker ‘told them to bag their own groceries’ at a staffed check-out.

The customer said he was buying $130 worth of groceries at the supermarket when the cashier told him to pack his items to ‘make the process faster’ in a post to Reddit.

However, fellow shoppers were puzzled by the checkout operator’s excuse while one Woolworths employee revealed the one reason staff may refuse to pack customers’ bags.

A shopper sparked a heated debate after claiming a Woolworths worker refused to bag their groceries at the checkout. But staff hit back claiming there could have been a good reason

In the post, the Redditor said he was confused by the experience in which the cashier at a manned checkout asked him to pack their own bags while buying $130 worth of groceries.

‘When questioned whether this was their job or a Covid measure, the cashier responded by stating it “made the process faster”,’ he explained.

‘I obliged but was left curious whether this is accepted, tolerated and normal now days? I should also highlight, this is not the self checkout area.’

Many responded to the post saying they would be ‘annoyed’ by the exchange and expect cashier to bag their shopping.

‘Yeah, that would annoy me, if I wanted to bag my own groceries, I’d go to the self checkout or Aldi,’ one user replied.

‘Whilst I am capable of rapid bagging, this kind of request would press my ‘go slow’ button,’ a second joked.

‘That’s a nope from me. Part of their job is to pack items into bags, I’m not responsible for doing that,’ wrote another.

However, not everyone was angered by the checkout worker’s request. 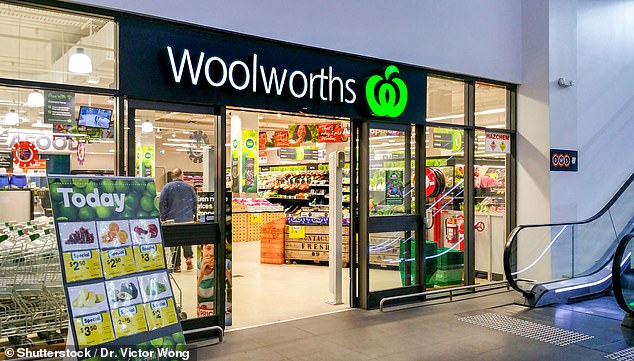 ‘Bagging your own groceries is better, you can make sure nothing is crushed and all the cold stuff is together. Plus, if you’re making someone’s job a bit easier that’s nice too,’ one person pointed out.

‘I’ve been asked to when they were overrun with customers. I think it’s more of a cut-down-this-line thing than a Covid thing,’ another explained.

‘I’ve never been asked to bag my own items but If I can see there’s a person/s behind me waiting then I’ll help bag items. My choice…The worker seemed kind of rude as it is their job though,’ said a third.

Do you prefer to bag your own groceries?

Current and former Woolies workers and checkout staff chimed in saying they would only ask customers to pack their groceries if the bags were dirty.

‘Nope. The only time we can do that is if your bags are dirty or have something wrong with them, then we can refuse to touch them,’ one claimed.

‘I go faster when I pack myself (I’m a cashier). Why they thought you packing was faster is beyond me. I work at Woolies and really they shouldn’t have asked unless you have dirty bags or something like that,’ another agreed.

‘We have a sign on our register to answer the question of packing bags saying the process is faster if we do it.’

If Woolworths employees have concerns about the cleanliness or hygiene of a shopper’s bag, they can offer them a replacement.

‘Our teams work hard to serve thousands of customers to the highest standard every day, however, we don’t always get it right,’ they said.

‘Our checkout operators are expected to bag groceries at our manned checkouts if that’s the customers wish, as per our bagging policy. We encourage this customer to reach out to our friendly Customer Service who’ll be able to further assist them.’