Shoppers are raving about a 15-cent dishwashing tablet that performs ‘just as good, if not better’ than expensive brands costing upwards of $1.

Woolworths Shine 10-in-one tablets cost just $4.30 for a pack of 30, or $0.15 each – and it’s one of the cheapest brands on the market that’s perfect for those on a tight budget. Pricier versions cost up to $1 per tablet.

The tablets contain a self-dissolving wrapper, promising a streak-free shine and is said to deliver active enzymes and use oxygen technology to break down tough stains, including grease.

Dozens of customers said they were amazed with the budget buy’s performance, with one saying: ‘I tried it out today on a load of very dirty dishes and it did just as good job as some very expensive ones. No difference I can see.’

Shoppers are raving about a 15-cent dishwashing tablet from Woolworths that performs ‘just as good, if not better’ than expensive brands costing upwards of $1

Another wrote: ‘Absolutely brilliant. I’ve been using these for ages. Everything always comes out clean and for they price they’re an amazing bargain as they’re better than the expensive ones.’

While one added: ‘These left my dishes clean and shiny, probably better than the tablets I usually buy but at a fraction of the cost.’

Many shoppers said it’s the only brand they use for their dishes.

While another said: ‘Performs very well, better than expected. I was a bit sceptical at first as l’ve only ever used Finish. Thinking it wouldn’t clean properly but l was pleasantly surprised that it cleaned my dishes just as well.’ 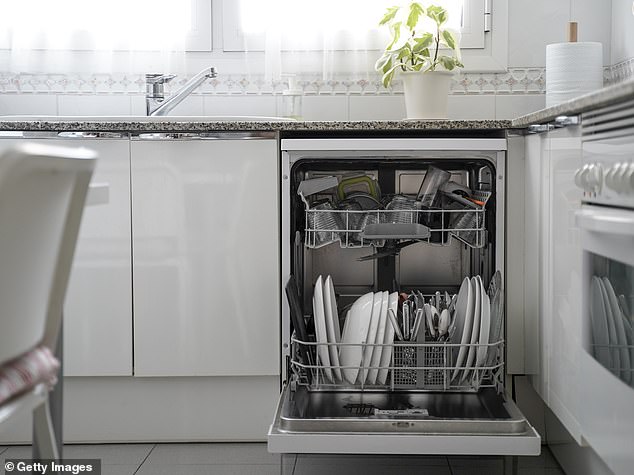 However, not everyone was a fan of the products, with one saying: ‘Does the job well. These dishwasher tabs are great. Unfortunately doesn’t come out as shiny as the expensive brands but still cleans very well.

‘Given the much better price of these it’s a happy sacrifice to make.’

While another added: ‘Not as good as other options. This tablet works fine for relatively clean dishes but I found it does not give as good a result as other products. Backup option only for us.’

According to consumer review website Canstar Blue, Woolworths Shine was named in the top seven dishwasher detergents review of 2021.

More than 1,350 Aussies voted for their favourite supermarket dishwasher detergents, with Woolies taking out the seventh spot.

Shine was rated four stars for value for money and ease of use, and landed on three stars for effectiveness, final result, scent, environmental friendliness and overall satisfaction.