The World Athletics Championships got underway on Friday with a firework-filled opening ceremony in sweltering conditions in Doha.

With temperatures exceeding 32 degrees, the tournament organisers turned the heat up further with a firework display at Corniche promenade to mark the start of the competition.

Despite the razzmatazz of the opening ceremony, local interest in the Championships has been muted and large swathes of empty seats could be seen as the games began inside the 40,000-seater Khalifa International Stadium. 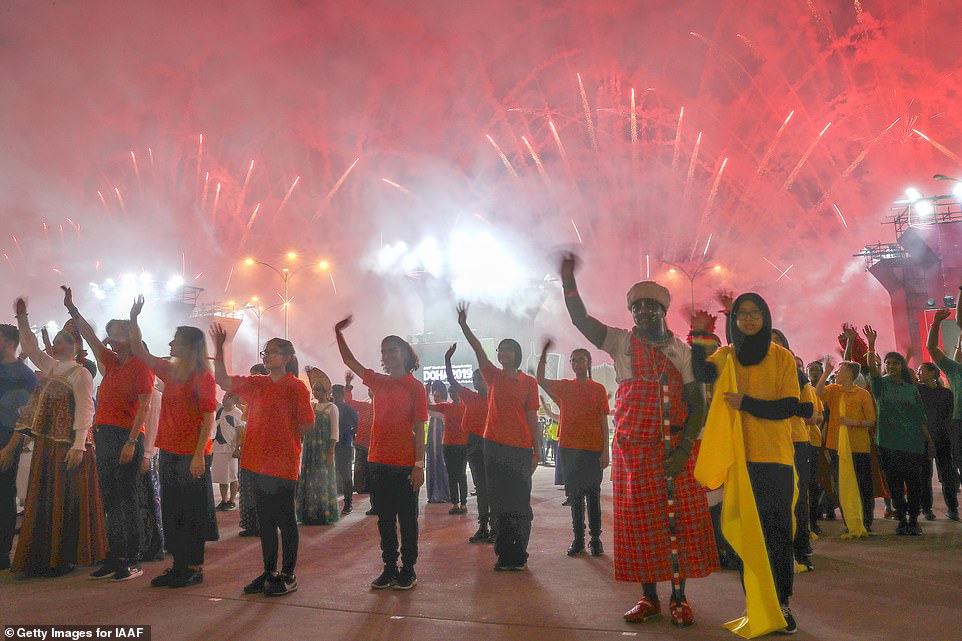 Despite the razzmatazz inside the Khalifa International Stadium, just 50,000 tickets have been sold for the 10-day event 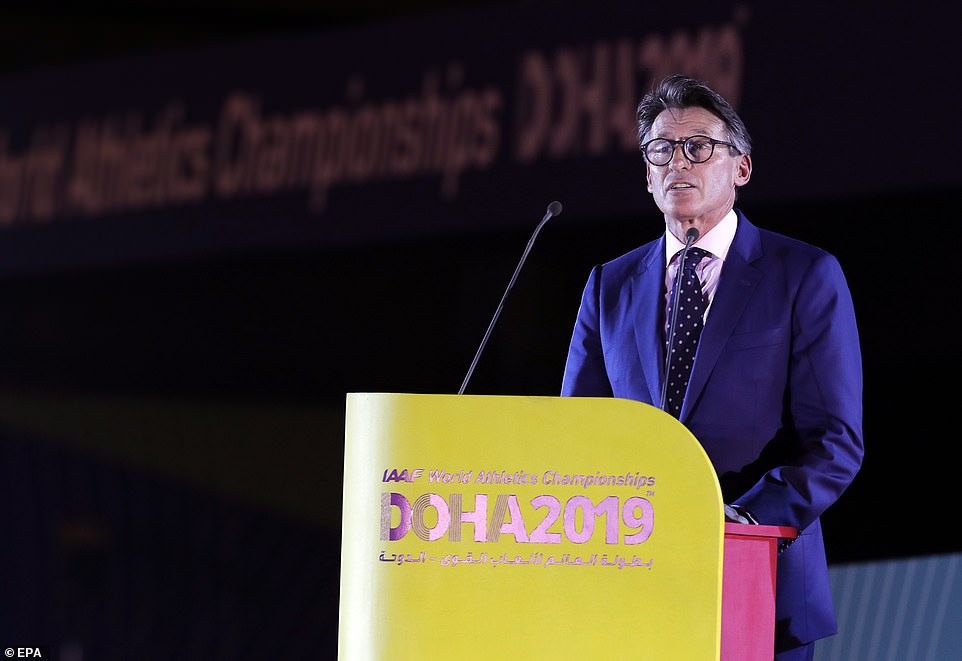 IAAF president, Lord Coe, (left), took to the stage to deliver his opening address to mark the start of the Championships 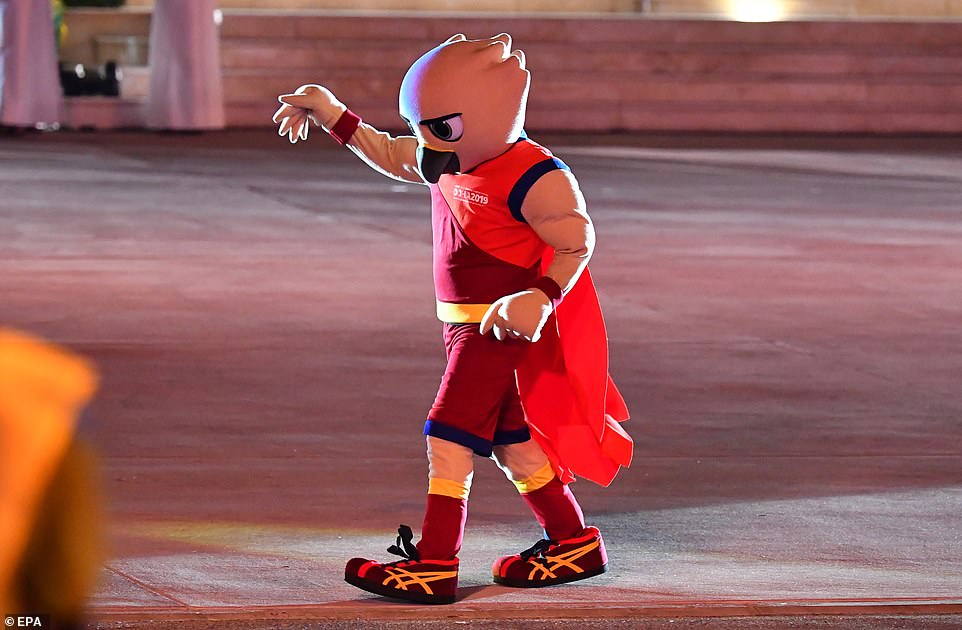 Falah the Falcon, the mascot for the 2019 World Championships, made a grand entrance during the opening ceremony

Event organisers have revealed they have sold just 50,000 tickets for the 10-day event, meaning empty seats are likely to be a feature throughout the competition.

IAAF president, Lord Coe, who was reappointed for a second term on Wednesday after four years at the head of the organisation, took to the stage for his opening address.

Coe is tasked with the unenviable task of boosting interest in athletics among a younger audience and doing so without the pulling power of the man who has been the face of the sport for the past decade, Usain Bolt. 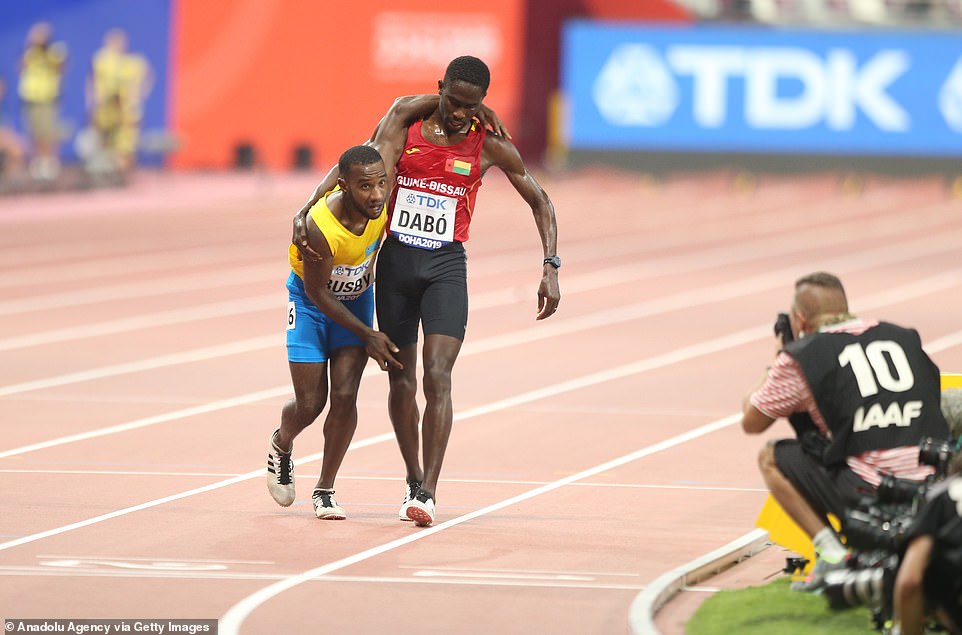 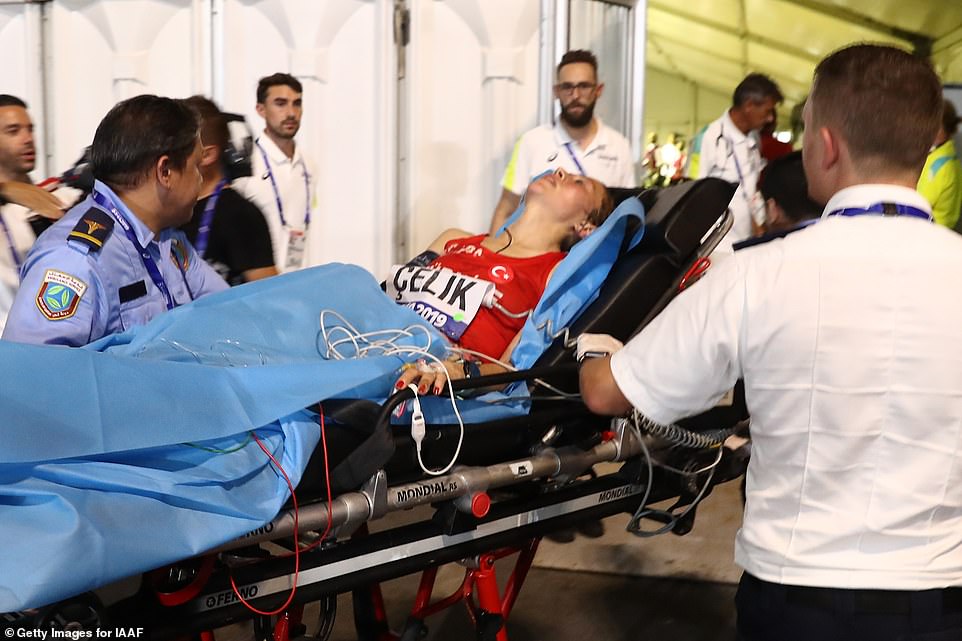 16 athletes also dropped out of the women’s marathon by the halfway stage, with some requiring urgent medical attention

With Bolt now retired, USA sprinter Christian Coleman has been tipped to replace him as the sport’s poster boy, but the controversy surrounding his missed drugs tests has left another cloud over athletics.

Still, Coleman was the star of the opening day in Doha as he recorded the fastest time in the men’s 100 metres heats, with a time of 9.98 seconds, making him the only man to run under 10 seconds on Friday.

Justin Gatlin, who at 37 is the man most likely to run Coleman closest, navigated his way to the semi-finals, as did Britain’s Adam Gemilli and Zharnell Hughes, who impressed most among the Brits with a time of 10.08. 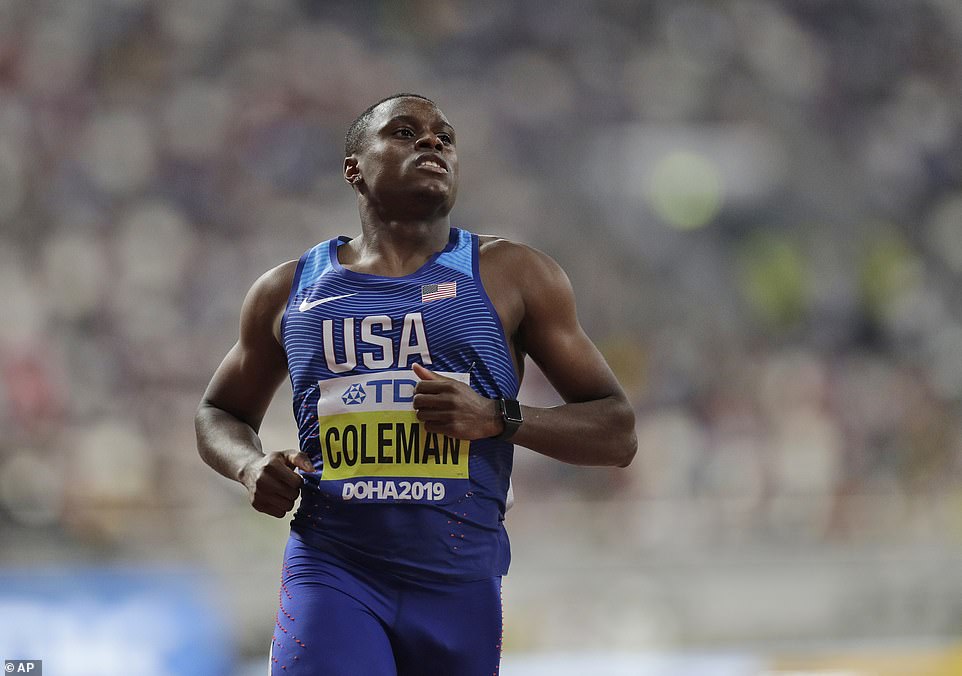 Earlier in the day, USA sprinter Christian Coleman was the only man to run under 10 seconds in the men’s 100 metres heats 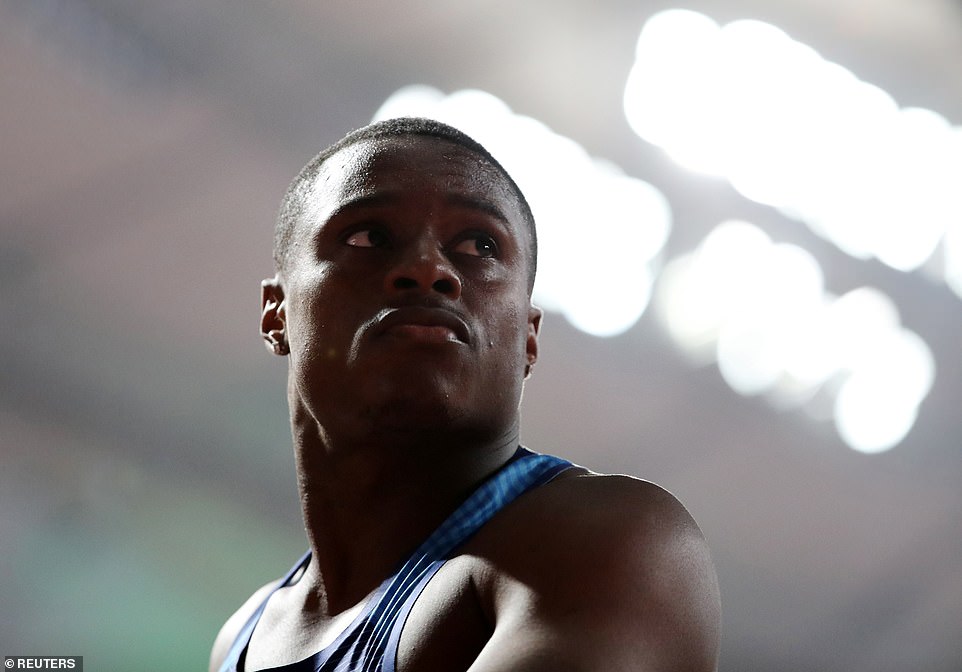 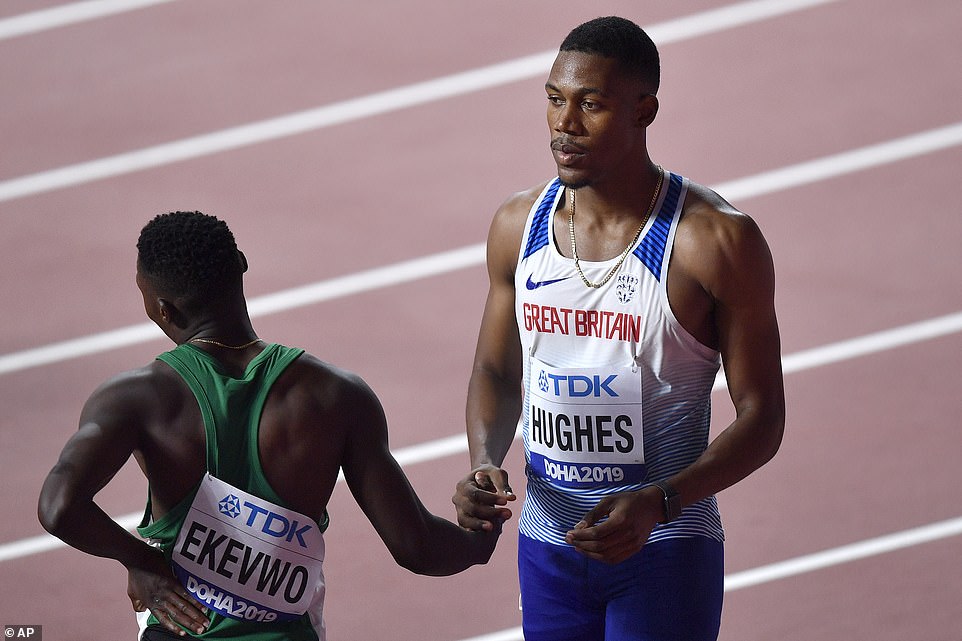 Britain’s Zharnell Hughes fared the best of the British sprinters with a time of 10.08 to qualify for the 100 metres semi-finals 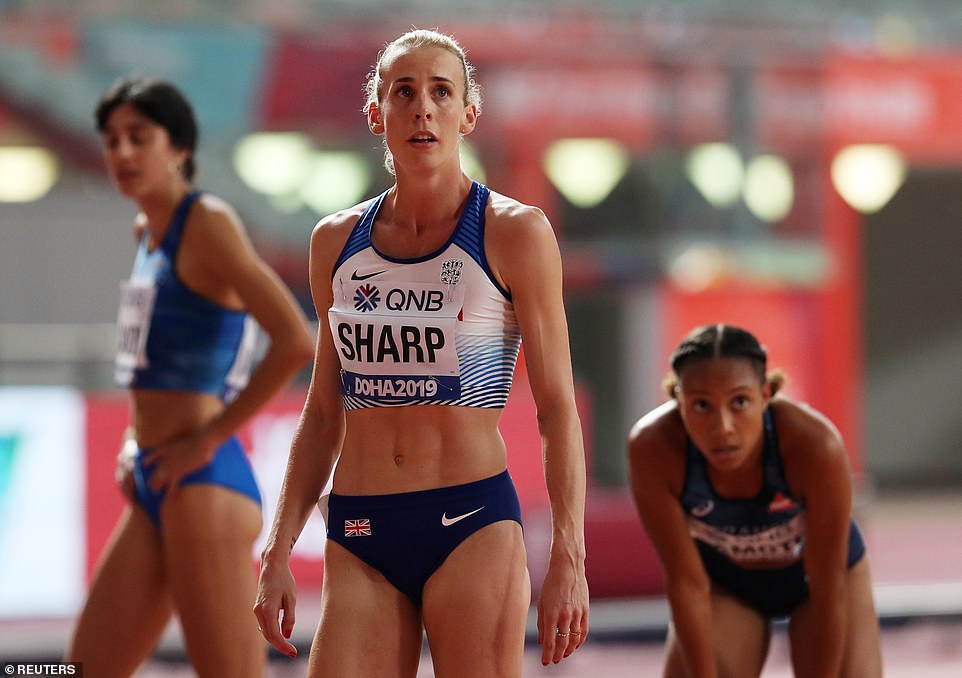 Elsewhere, Briton Lynsey Sharp saw her Championships come to a premature end after running out of steam down the home straight and finishing fourth in her heat.

The stifling conditions in Doha have prompted cause for concern among athletes and in the 5,000 metres Guinea-Bissau’s Braima Dabo had to help the struggling Jonathan Busby of Aruba complete the last 250 metres of the race.

The stadium has been fitted with air conditioning to relieve conditions but there is nothing organisers can do to lower the temperature for the women’s marathon, which started at midnight to ensure the coolest possible conditions.

Despite that move, 16 athletes had dropped out by the halfway stage through sheer exhaustion, with several needing stretchers to carry them off the 26 mile course.