That’s one way to bounce back! Cristiano Ronaldo shrugs off Manchester United exit as he scores Portugal’s opening goal at the World Cup with a penalty – but fans insist he DIVED to earn it

Cristiano Ronaldo recovered quickly from his exit from Manchester United as he scored Portugal’s first goal at the World Cup.

The veteran forward netted from the spot just after the hour mark to break the deadlock against Ghana in their first group game at the Qatar tournament on Thursday evening.

Ronaldo, 37, was pictured fighting back tears during the Portuguese national anthem in his first game since having his contract terminated by the Red Devils. 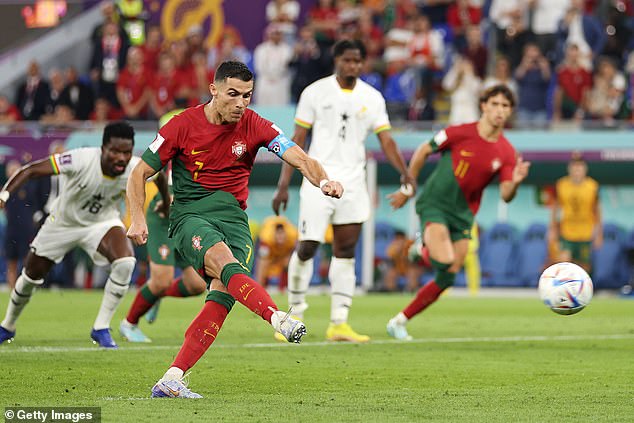 But the confidently dispatched penalty, followed by his trademark ‘Siuuuu’ celebration, was highly controversial.

Ronaldo burst into the box and dived theatrically to the ground under minimal contact from Southampton defender Mohammed Salisu, but the referee Ismail Elfath awarded a spot-kick and VAR surprisingly did not overturn his decision.

And fans quickly rushed to social media to accuse the 37-year-old of an ‘absolutely pathetic’ dive and labelled him ‘trash’ for his actions in trying to fool the referee.

One said: ‘I just knew Ronaldo would dive. The game was becoming too tough for him to handle. It’s inevitable!’

A second added: ‘That Ronaldo dive was absolutely pathetic.’

Another fan posted: ‘That was the softest penalty call I’ve ever seen. What a dive by Ronaldo he’s trash.’

One tweeted: ‘Embarrassing dive from Ronaldo. Never a penalty.’

A fifth said: ‘That’s a disgraceful dive from Ronaldo.’

And BBC pundit Chris Sutton posted a GIF of a woman flopping to the floor theatrically.

With the goal, Ronaldo became the first ever player to score at five different World Cup tournaments.