Cheers to you, Olivier! Giroud is honoured at a meal with his France teammates after overtaking Thierry Henry to become his country’s all-time top scorer… as he thanks the squad ahead of crunch World Cup quarter-final with England

Olivier Giroud has been honoured at a meal with his France teammates after overtaking Thierry Henry to become his country’s all-time top scorer.

The striker gave a speech and thanked the squad in Qatar after being handed a commemorative France shirt which celebrated the 52 goals he has amassed for the country.

The 36-year-old was warmly congratulated by his manager Didier Deschamps and the squad, including the likes of Kylian Mbappe, Raphael Varane and Antoine Griezmann.

The AC Milan man made history on Sunday by taking the title off Henry after finding the net against Poland at the World Cup.

Giroud, 36, scored his first international goal in France’s friendly win over Germany in February 2012, and over the past decade has climbed the rankings, getting his 52nd goal for his country with a simple, classy finish.

His impressive 44th-minute strike opened the scoring in a win that sent France through to the quarter-finals where they will meet England tomorrow evening.

Giroud made his debut for the national team in November 2011 and has since gone on to register 117 caps for his country.

He has netted one hat-trick and ten braces, including his duo of goals in their 4-1 win over Australia in Qatar, which took him to a half-century of goals for Les Bleus.

His 50th goal in international play came five years after his 25th goal, which was a milestone he achieved with the second of his only hat-trick against Paraguay in 2017. 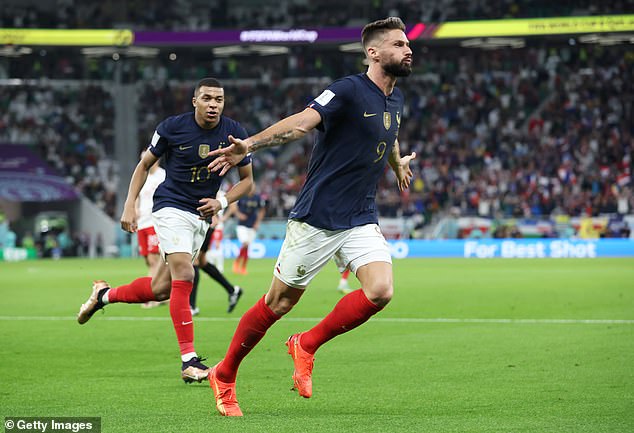 The most number of goals he has scored against any country is four, which came against both Iceland and Australia.

Henry, who is currently assistant coach for Belgium at the World Cup, scored 51 goals for France between 1998 and 2009.

The former Arsenal and Barcelona forward surpassed the previous record holder, Michel Platini, during a European Championship qualifier against Lithuania in October 2007.

Antoine Griezmann is third on the list with 42 goals, one ahead of Platini, while Karim Benzema is fifth on 37 goals.