Days-long celebrations in the capital have hit the headlines around the world since La Albiceleste defeated France 4-2 on penalties on Sunday night, with the wild scenes turning from pure jubilation into partial chaos.

There have been a number of casualties reported, including a woman who was killed in her home by a stray bullet, and man who fell from the team’s bus as he attempted to land on it by leaping from a bridge.

And now, Papu Gomez – one of Argentina’s own footballing heroes – can count himself among the casualties of the country’s wild celebrations. 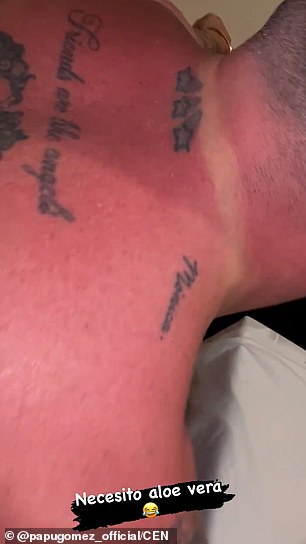 Argentine World Cup winner Papu Gomez was left covered in painful sunburn (pictured) after his team’s open top bus victory parade through Buenos Aires. he seemed to take the pain in his stride, writing ‘I need aloe vera’ in a message to his fans

The midfielder, from Buenos Aires, was left as red as a lobster after he spent a day in the sun partying on the open tour bus as it wound through his home city.

Pictures from the city showed the triumphant player shirtless – basking in both glory and the sunshine – with his World Cup winners medal around his neck. Without a care in the world, the 34-year-old was seen waving to fans and partying hard.

However, upon arriving home after the open top bus celebration, Gomez was left wishing he had at least taken a moment to cover up with sun cream.

The player, who is currently signed to Spanish club Sevilla, only had one patch of skin left unburnt – where his winner’s medal had been hanging. But he seemed to take the pain in his stride, writing ‘I need aloe vera’ in a message to his fans. 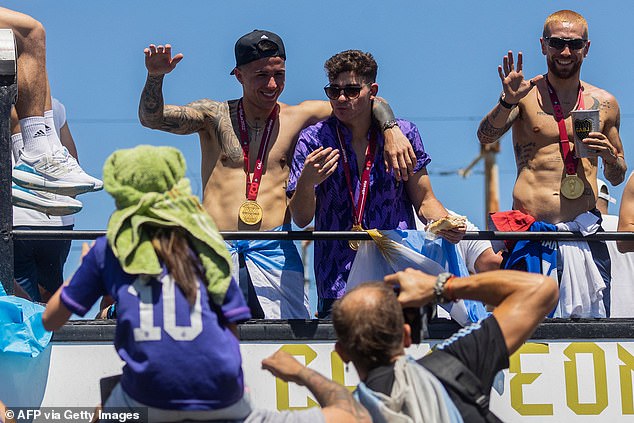 Pictured: Papu Gomez (right) is seen on Argentina’s open top bus parade after winning the World Cup on Sunday. The 34-year-old was left sunburnt after the parade. The player only had one patch of skin left unburnt – where his winner’s medal had been hanging 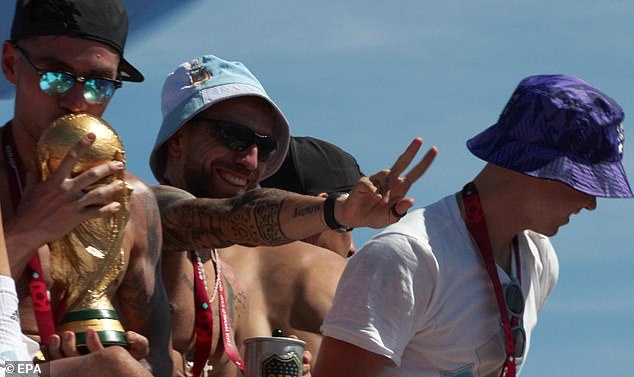 Pictured: Gomez is seen in an Argentinian bucket hat on top of the open top tour bus while celebrating his team’s World Cup win 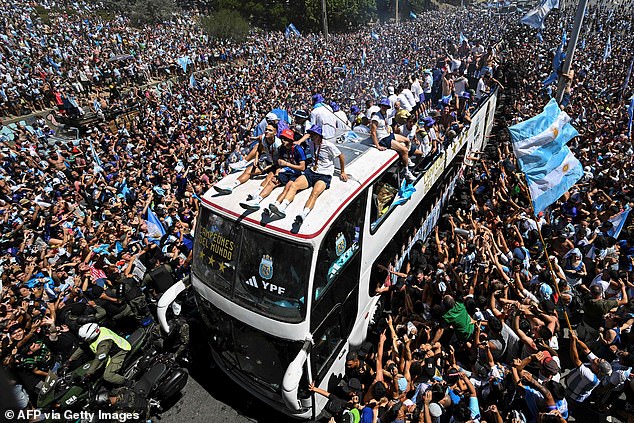 So many jubilant, flag-waving fans swarmed the capital that the players had to abandon the open-air bus (pictured) transporting them to Buenos Aires and board helicopters for a capital flyover that the government billed as an aerial parade

He and his teammates spent such a long time on the bus because so many people had turned out to greet them that it had got stuck and only managed to travel half of the planned route.

So many jubilant, flag-waving fans swarmed the capital that the players had to abandon the open-air bus transporting them to Buenos Aires and board helicopters for a capital flyover that the government billed as an aerial parade.

‘The world champions are flying over the whole route on helicopters because it was impossible to continue by land due to the explosion of people’s happiness,’ Gabriela Cerruti, the spokesperson for President Alberto Fernández, wrote on social media.

The bus had been moving at a snail’s pace for more than four hours through the throngs of humanity before the overland parade was cut short.

But the players were all smiles as they watched the multitudes hostling to get as close as possible to the bus. An estimated 4 million people were in the streets by Tuesday afternoon, according to local media citing police sources.

Team Captain Lionel Messi and the rest of the players waved at the massive crowd as they carried the World Cup trophy aloft after securing the country’s third title. 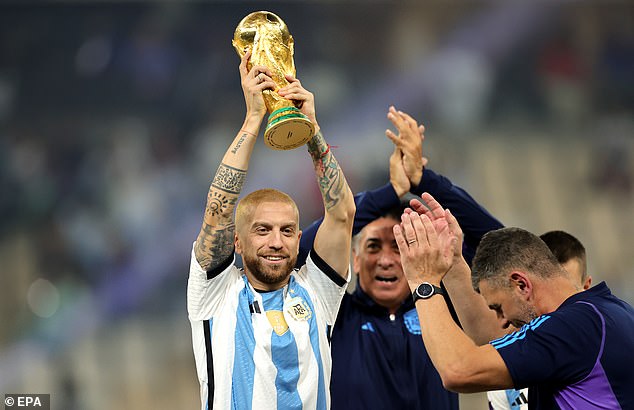 Papu Gomez of Argentina lifts the trophy after the FIFA World Cup 2022 Final between Argentina and France at Lusail stadium, Lusail, Qatar, 18 December 2022 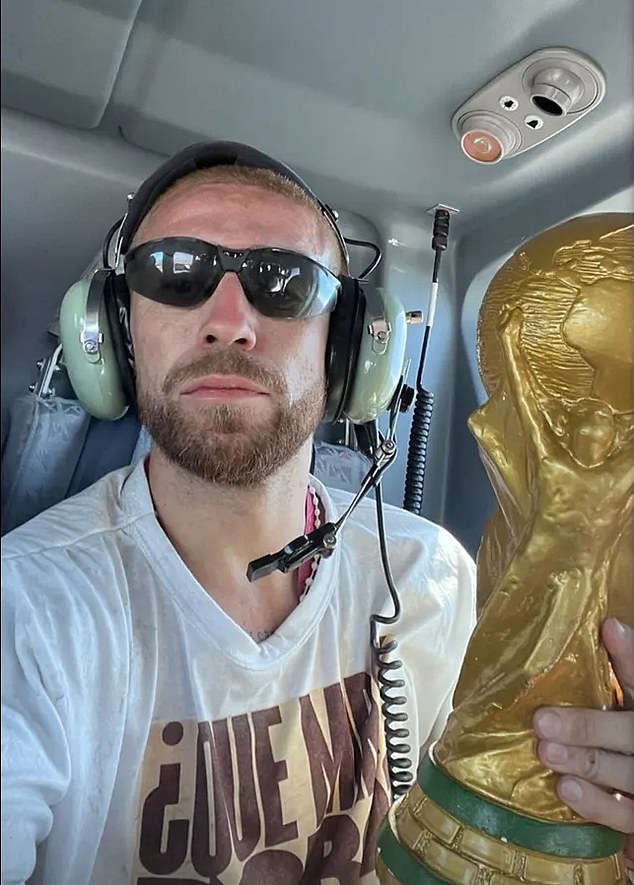 Pictured: Papu Gomez is seen in a helicopter after the team’s tour bus ground to a halt after being mobbed by fans during their victory tour of Buenos Aires

After flying over key points where fans had gathered, the helicopters returned to the headquarters of the Argentine Football Association outside the capital.

Some fans continued celebrating in the streets, while others headed out of Buenos Aires with long faces, complaining they were unable to pay their respects to the team that brought home the country’s first World Cup trophy since 1986.

Others, however, took it in stride.

‘This is madness, it’s indescribable,’ said Brian Andreassi, 23, as he walked downtown wearing the team’s jersey. ‘There are no words.’

Toward nightfall, when most of the fans had already poured out of downtown Buenos Aires, there were isolated clashes between a few stragglers and law enforcement. At least eight people were injured, according to local media reports.

The incidents began when firefighters went to the Obelisk, the iconic Buenos Aires landmark that is the traditional site of celebrations, to evict a few people who had broken their way inside the monument.

The World Cup and the success of the Messi-led squad brought much-needed good news for a country stuck for years in economic doldrums and suffering one of the world’s highest inflation rates, with nearly 4-in-10 people living in poverty.