At 18 months, Senna Mennes loves to run and dance around, just like any toddler would.

Yet for Sebastian Mennes, 37, and Suzanne Nakhla, 36, watching Senna enjoy such simple pleasures is nothing short of a miracle.

That’s because soon after their daughter’s birth, Sebastian and Suzanne were warned that Senna may never walk unaided, and they feared she would need a wheelchair.

At just one day old, baby Senna had a stroke — one of the major arteries to her brain was briefly blocked, leading to a lack of blood and oxygen — which resulted in damage on one side of her brain.

Why it happened was unclear, but her parents were warned that it was unlikely Senna would ever walk, let alone run.

Senna was one of ten babies to take part in the first trial of this groundbreaking therapy — and in her case it appears to have transformed the outlook she faced after her birth on November 3, 2020

Usually, in such cases there is no treatment and the hundreds of babies who have a stroke each year in the UK often have to live with significant physical disabilities.

However, Senna was born in Holland where scientists have been trialling the use of a pioneering treatment administered by nose drops containing millions of stem cells.

The idea is that these cells can stimulate the body’s own cells to repair the damage left by the stroke. Ultimately, it may be used to help many other newborns who experience brain damage, for example due to a traumatic birth.

Senna was one of ten babies to take part in the first trial of this groundbreaking therapy — and in her case it appears to have transformed the outlook she faced after her birth on November 3, 2020.

At 39 weeks pregnant, Suzanne, an artist, had gone to hospital as she’d noticed that her baby had stopped moving.

‘I got a call to come to the hospital quickly as they were having to do an emergency caesarean,’ says Sebastian, a software entrepreneur.

Senna, who weighed a healthy 6lb 9oz (2.98kg), was given oxygen and taken to a medium care unit.

However, in the night she stopped breathing three times, started having seizures and was transferred to the neonatal intensive care unit in Rotterdam. ‘It was awful, as initially we didn’t know what was wrong,’ says Sebastian.

An MRI scan of the brain revealed that Senna had had a neonatal stroke — the name given to a stroke that happens in babies under 28 days old and which affects one in 2,300 babies. 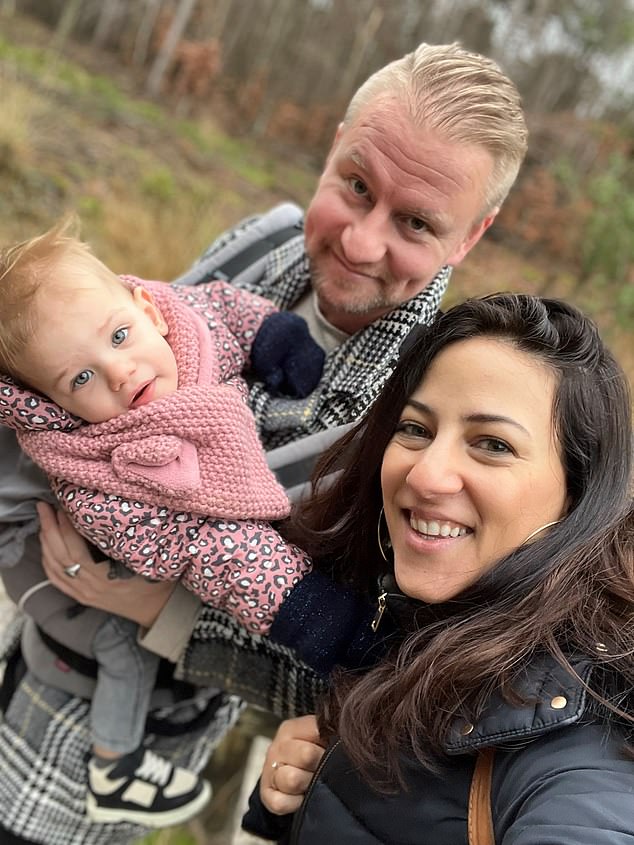 At 18 months, Senna Mennes loves to run and dance around, just like any toddler would. Yet for Sebastian Mennes, 37, and Suzanne Nakhla, 36, watching Senna enjoy such simple pleasures is nothing short of a miracle

Neonatal stroke is a common cause of cerebral palsy, a group of conditions where movement and co-ordination are affected by a problem in the brain that occurs before, during or after the birth.

The scan showed the stroke had damaged the left-hand side of Senna’s brain, meaning her motor skills — the movement of major muscles and joints — were likely to be affected.

‘When they told us Senna’s condition, it was terrible news,’ says Sebastian. ‘All I could visualise was her future, thinking she would need to be in special classes at school, not able to play with her friends or run around.’

But then the doctors mentioned the experimental stem cell treatment. If her parents gave the go-ahead, then Senna would be among the first in the world to have it.

Suzanne agonised more over their decision: ‘My first thought was, ‘If we can do anything about it, we should do it.’ But after reading that it was an experimental study, I thought, ‘Oh! Is it safe?’ ‘

Scientists at the University Medical Center in Utrecht had spent 12 years researching the use of mesenchymal stem cells (MSCs) which are found in bone marrow, where they normally form new blood cells.

Previous research had revealed that these cells create proteins that stimulate the growth and repair of tissue anywhere in the body. The Utrecht team’s theory was if they could get stem cells into the damaged part of a baby’s brain, the stem cells’ growth factors would help suppress the inflammation caused by the stroke, which would otherwise cause more harm, and stimulate the brain’s own stem cells to repair the damage.

The problem was how to deliver the stem cells to a fragile newborn.

‘If we did this via an injection into the bloodstream, the cells wouldn’t reach our target of the brain but end up in other organs, so we decided to administer them in nose drops,’ explains neuroscientist Cora Nijboer, who led the research.

‘The nasal cavity is very close to the brain, with only one bone in between, and it has little gaps in it so the cells could migrate through them into the brain,’ she says.

‘The injured area sends out ‘alarm signals’ which guide the stem cells to the right spot.’

In animal studies, the cells arrived at the damaged site of the brain within two hours, after which the brain’s own stem cells were activated to repair the damaged tissue.

Senna and nine other babies were given a teaspoon-sized dose of 50 million stem cells (from a donor’s bone marrow) split between the two nostrils. They were then monitored in intensive care for four days.

While one baby had a mild fever, none of the others had side-effects from the treatment. At three months, the babies had a follow-up MRI scan, which in every case showed that the area damaged by the stroke had shrunk.

‘With Senna’s scan, the area of the stroke lesion we had seen at birth was difficult to detect,’ says Professor Manon Benders, who specialises in treating newborn babies and is part of the research group.

At four months, each baby had better movement than expected, and a year on, although three babies have weakness in one side of their body, all ten are now walking.

‘We expected that at least some of them would need a wheelchair or a walking frame, but they are all doing really well,’ says Professor Benders.

When the children are two years old, their development will be checked again. The full results will then be published in the June edition of Lancet Neurology, though Professor Nijboer emphasises that this treatment offers hope for babies rather than adults.

‘The therapy is based on the brain repairing itself, and as a young baby’s brain is still developing, its repair system is much more active than in older people,’ she says.

Darius Widera, a professor of stem cell biology at Reading University, says bigger studies are needed but adds: ‘If this proves there is a therapeutic benefit, then that would be a great option for these babies.’

Senna, meanwhile, is developing like any girl her age.

‘She was walking before her first birthday, is ahead of her growth curves and has started talking, saying Papa and Mama,’ says Sebastian. ‘We are just so thankful, each and every day.’