By Michael Powell and Daniel Jones For The Mail On Sunday

World leaders descended on London last night amid a row over whether Chinese delegates will be allowed to visit the Queen’s lying-in-state.

But this was denied by both sides – and last night it was confirmed that the delegation, led by Vice-President Wang Qishan, would be able to pay their respects.

Earlier it had been reported that Chinese officials would be banned in response to sanctions China has imposed on five MPs and two peers who have been critical of Beijing. However, the ban applies only to its London embassy staff.

In another row, critics called for Saudi ruler Mohammed bin Salman not to be allowed to attend the funeral in protest over the suspected assassination of journalist Jamal Khashoggi.

The country’s embassy in London said the Crown Prince would be in the UK this weekend for his first visit since Mr Khashoggi was murdered in 2018. US intelligence reports claim that the killing had been personally ordered by the Crown Prince.

The diplomatic wrangles played out as dozens of heads of state, political leaders and dignitaries descended on the capital for an extraordinary reception tonight at Buckingham Palace being hosted by King Charles.

Traditionally, a Japanese emperor stays away from funerals except for those of his own parents because of a cultural belief that considers death to be impure. But Japan’s Emperor Naruhito and Empress Masako (pictured) were seen leaving Tokyo yesterday – highlighting the deep bond between the families 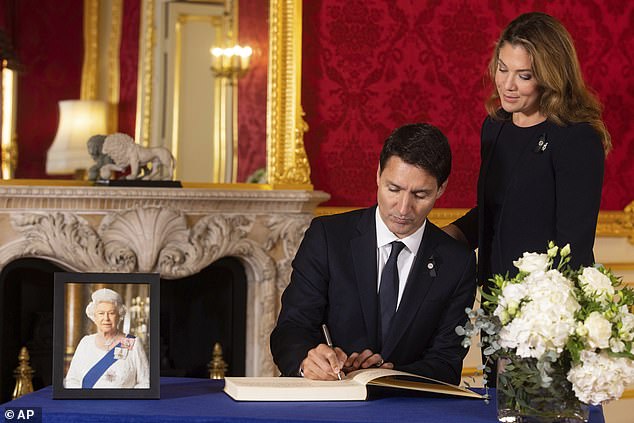 They also signed a book of condolence at Lancaster House, along with other dignitaries including Dame Froyla Tzalam, Governor-General of Belize.

Mr Trudeau and Mr Albanese then met King Charles with the leaders of 14 Commonwealth countries where he is head of state. Earlier in the day, the King held a reception for his representatives in Britain’s former colonies, ranging from Antigua and Barbuda to Tuvalu.

US President Joe Biden and First Lady Jill were due to touch down at Heathrow last night.

The President was travelling on Air Force One with the White House’s ‘Chief of Protocol’ Ambassador Rufus Gifford, who will make sure he avoids making any of his trademark gaffes when he meets the new King. 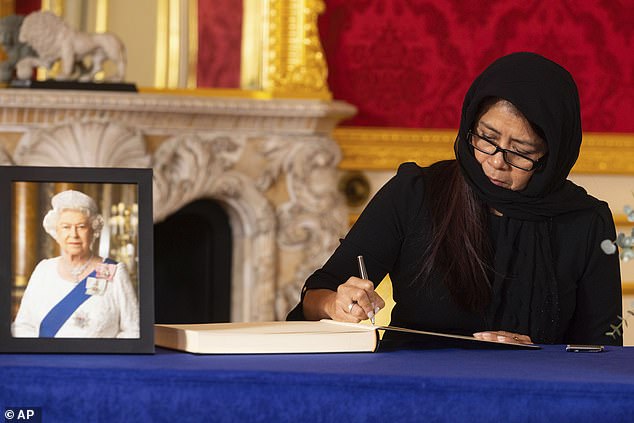 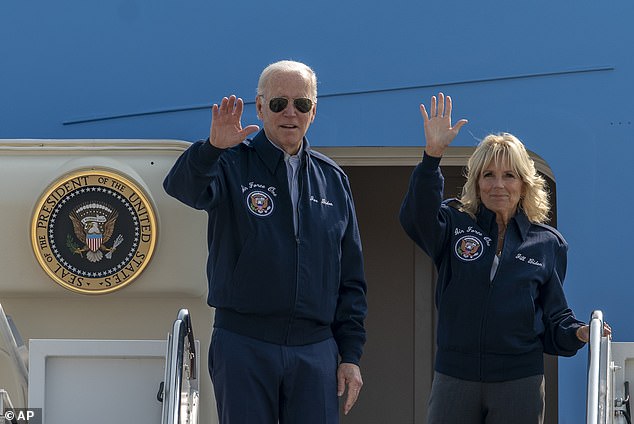 Mr Biden was expected to go to the lying-in-state today. Afterwards, the President is due to sign an official book of condolence before attending the reception at Buckingham Palace.

There has been disquiet from some world leaders after Mr Biden was told by British authorities that he could make his own travel and security arrangements, while they were told they would have to board buses to the funeral tomorrow.

Among those catching the bus will be Japanese Emperor Naruhito and Empress Masako, who were due to arrive in the UK last night.

Their decision to attend the Queen’s funeral underscores the importance and the deep bond between the royal families. Traditionally, a Japanese emperor stays away from funerals except for those of his own parents because of a cultural belief based in the Shinto religion that considers death to be impure.

Members of royal families across Europe – including Spain’s King Felipe VI and Queen Letizia, Denmark’s Queen Margrethe II and her heir, Crown Prince Frederik – are thought to be arriving today as they have less distance to travel.