The world order is in chaos and trust between countries is at breaking point, the UN secretary general declared today.

Addressing the opening session of the UN General Assembly in New York, Antonio Guterres said trust in the rules-based global order and among states was ‘at a breaking point’ and international cooperation was becoming more difficult.

World order is in chaos and trust between countries is at breaking point, the UN secretary general declared today

‘Universal values are being eroded. Democratic principles are under siege.’

Guterres did not single out a country for criticism, but there are fears among UN diplomats that the world is being carved up into spheres of influence and a return to great power rivalry.

Trump’s administration has made clear its distrust of international treaties, having scrapped the Iran nuclear deal, the Paris climate agreement and cut funding to the United Nations.

UN diplomats say the US stance has emboldened Russia and China to push their view of the global order in which human rights take a second seat to development and sovereignty rights.

‘Today, with shifts in the balance of power, the risk of confrontation may increase,’ warned Guterres.

The human rights agenda is losing ground and ‘authoritarianism is on the rise,’ he said

Guterres urged world leaders to renew their commitment to a rules-based order, with the United Nations at its center to confront ‘massive, existential threats to people and planet.’

‘There is no way forward but collective, common-sense action for the common good,’ he said.

Drawing a list of global problems, Guterres acknowledged that peace efforts were failing and that respect for international humanitarian norms was unraveling. 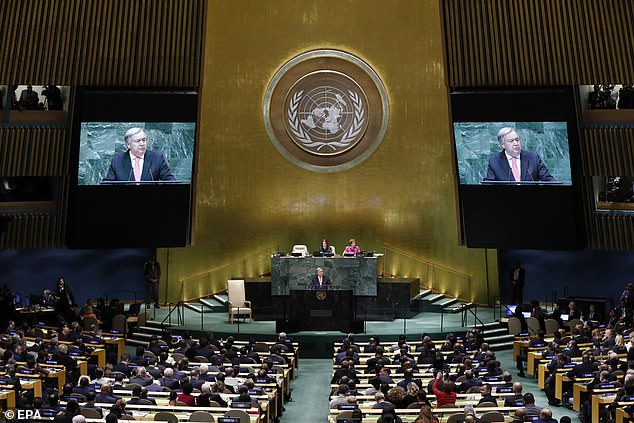 ‘There is outrage at our inability to end the wars in Syria, Yemen and elsewhere’, he said.

‘The Rohingya people remain exiled, traumatized and in misery, still yearning for safety and justice.’

The two-state solution to the Israeli-Palestinian conflict has become ‘more and more distant’ while the nuclear threat ‘has not eased’.

Guterres zeroed in on climate change as an urgent priority, warning that if no concrete action is taken in the next two years to reduce greenhouse gas emissions, the world risks facing runaway climate change.

‘Climate change is moving faster than we are – and its speed has provoked a sonic boom SOS across our world,’ he said.

About 130 world leaders are attending this year’s annual session including Trump and Iranian leader Hassan Rouhani who also speaks on Tuesday. France’s Emmanuel Macron, a champion of multilateralism, also has his turn at the podium on Tuesday.