A World War Two veteran was honored at his local Chick-fil-A store on Veterans Day when the manager decided to give him free food for life.

Ernie, a 92-year-old veteran from Avon, Ohio, visits the restaurant every day for a chicken nugget kids meal and a root beer, which he said is the best in the town.

Ernie told Fox59: ‘I like nuggets. And if you want a good one, this is the place to come’.

Ernie, a 92-year-old World War Two Veteran pictured the moment Chick-fil-A owner Chris Tincher told him they were offering free food for life at the restaurant in Avon, Ohio

Staff at Chick-fil-A decided to make a very special gesture on Veterans Day by offering Ernie free food for life at the outlet.

They recorded the heartwarming moment on Facebook as staff sat with Ernie to share the good news.

He is seen sitting in the video with employee James Cooke, owner Chris Tincher and Executive Director Melissa Luebbert.

‘James came up with a really good idea as we were thinking of how to honor you,’ Tincher said in the Facebook video.

‘He said ‘what if when Ernie came in, he never had to pay for Chick-fil-A again, when he came to our restaurant?’ So that was James’ idea, he wanted to honor you.

‘So we wanted to say every time you come into this restaurant, you’re family now.

‘So you no longer have to pay for any of your meals. 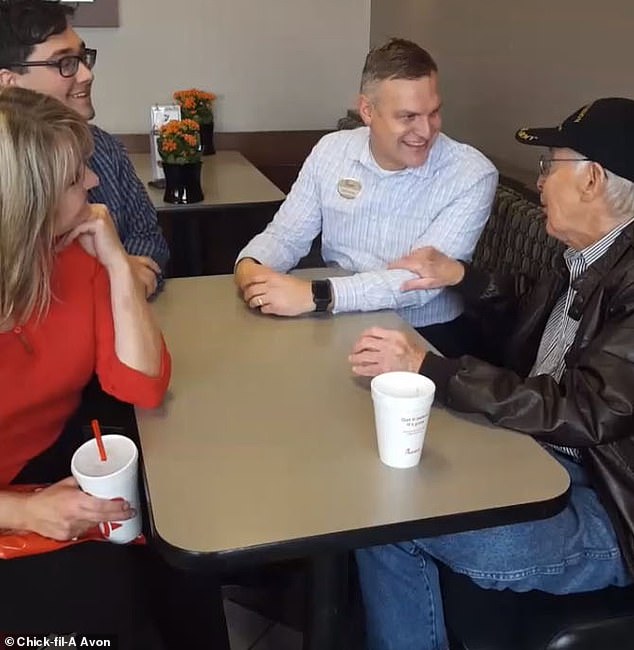 In the video, Ernie begins refusing the offer, part of a generation not too keen on receiving a free meal.

‘It was kinda of a shock to me, Ernie said of the gesture. I didn’t think I really deserved a free meal’.

But the owner, a veteran himself, felt differently. He knows Ernie’s company means much more to the restaurant than Ernie’s money. 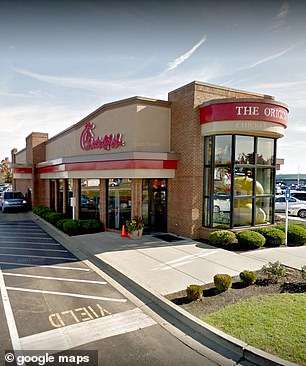 ‘He really does make people feel special. He’s almost more important to our staff than we are to him’.

‘I wouldn’t know what to do without him. He is definitely a bright spot in our day’.

Tincher is a veteran and said staff were brainstorming about what they could do to surprise Ernie.

He added: ‘He really does make people feel special.

‘I wouldn’t know what to do without him. He is definitely a bright spot in our day’, Luebbert said.

Even though Ernie can choose anything he wants on the menu for free, he still sticks with the kid’s meal, just thankful for the new friendship’s he’s formed.