The world ‘will miss its chance to avert climate disaster’ without an almost impossible fall in fossil fuel emissions, the United Nations warned today.

The UN Environment Programme said global emissions need to fall by 7.6 percent, each year, every year until 2030 to limit global temperature rises to 1.5C.

But emissions have continued to soar, smashing a record 55.3 billion tonnes of greenhouse gases in 2018 – three years after 195 countries signed the Paris treaty on climate change.

The UN Environment Programme said global emissions need to fall by 7.6 percent, each year, every year until 2030 to limit global temperature rises to 1.5C (pictured: smoke belches from a coal-fuelled power station near Datong, in China’s northern Shanxi province)

The Paris deal committed nations to limit temperature rises above pre-industrial levels to ‘well below’ 2C, and to a safer 1.5-C if at all possible.

To do so they agreed on the need to reduce emissions and work towards a low-carbon world within decades.

Yet the UN found that even taking into account current Paris pledges, the world is on track for a 3.2C temperature rise, something scientists fear could tear at the fabric of society.

Even if every country made good on its promises, Earth’s ‘carbon budget’ for a 1.5-C rise – the amount we can emit to stay below a certain temperature threshold – would be exhausted within a decade.

In its own words, the UN assessment is ‘bleak’.

While it insisted the 1.5-C goal is still attainable, it acknowledged that this would require an unprecedented, coordinated upheaval of a global economy that is still fuelled overwhelmingly by oil- and gas-fuelled growth. 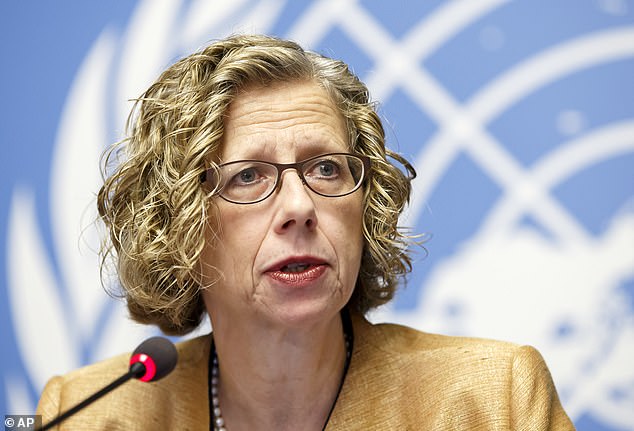 The Emissions Gap report, now in its tenth year, also details the cost of a decade of government inaction.

Had serious climate action begun in 2010, just after the Copenhagen summit that breathed new life into the debate, annual needed emissions cuts would be 0.7 percent for 2C of warming and 3.3 percent for 1.5C.

’10 years of climate procrastination has led us to where we are today,’ said executive director Andersen.

The report highlighted specific ‘opportunities’ for big emitters to push their economies into line with the Paris goals.

While advice varies between countries, the theme is clear: completely phase out coal, significantly pare back oil and gas, and dramatically build up renewable energy.

G20 nations were singled out as laggards: although they produce around 78 percent of all emissions, only 15 rich nations have outlined plans to reach net-zero. 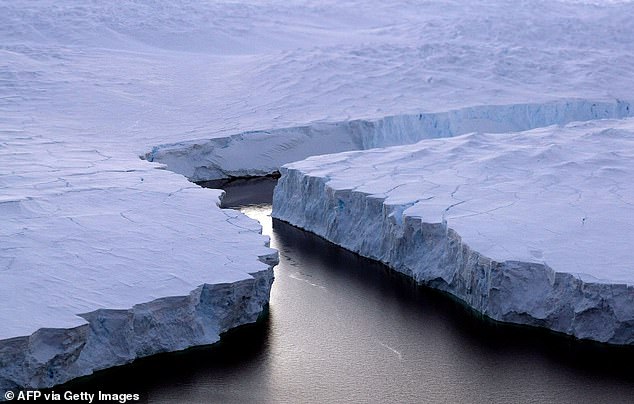 In its own words, the UN assessment is ‘bleak’ (pictured: An enormous iceberg breaks off the Knox Coast in the Australian Antarctic Territory in 2008) 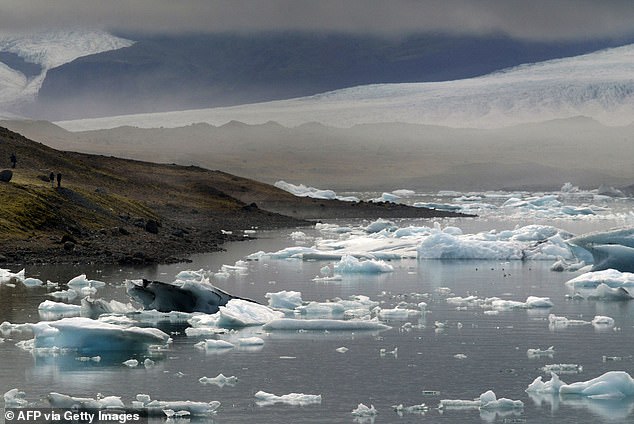 Had serious climate action begun in 2010, just after the Copenhagen summit that breathed new life into the debate, annual needed emissions cuts would be 0.7 percent for 2C of warming and 3.3 percent for 1.5C (pictured: ice breaks off the Vatnajokull Glacier before floating to sea in 2006)

The Trump administration, meanwhile, notified the UN earlier this month that the US will pull out of the Paris treaty, and has taken steps to boost fossil fuel production, including subsidies for technology to capture and store CO2 emissions from power plants.

In all, countries must increase their contributions to the climate fight five-fold to deliver the cuts needed for 1.5C.

Last year the Intergovernmental Panel on Climate Change – the world’s leading scientific body on the subject – issued a stark warning that going beyond 1.5C would increase the frequency and intensity of heatwaves, superstorms and mass flooding.

With just 1C of warming so far, 2019 is projected to be the second hottest in human history, a year marred by deadly wildfires and cyclones rendered more frequent as temperatures climb.

And despite the need for urgent action, with global energy demand set to continue rising for years, the UN itself conceded Tuesday that ‘there is no sign of (greenhouse) gas emissions peaking in the next few years.’

That turning point should have come years ago, said Alden Meyer, director of policy at the Union of Concerned Scientists.

‘We are not running out of time – we are already out of time,’ he told AFP. 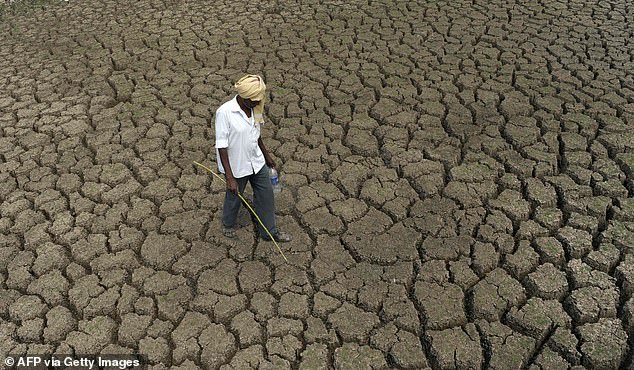 In this file photo taken on March 4, 2016, an Indian shepherd walks on the bed of the dried up Osman Sagar Lake, commonly known as Gandipet, on the outskirts of Hyderabad. – The world must slash its emissions of planet-warming greenhouse gases by 7.6 percent every year to 2030 or miss the chance to avert devastating climate change

The report said emissions would need to drop 55 percent by 2030 to stay on a 1.5C track – an unprecedented fall at a time of sustained global growth.

John Ferguson, director of country analysis at The Economist Intelligence Unity, said he was pessimistic that countries could undertake emissions cuts in the time required.

‘There’s the emissions gap but there’s also the gap between rhetoric and action, and that gap explains my pessimism that we’re not going to limit it to 1.5C,’ he told AFP.