Dramatic before and after images have revealed how a boy once known as the world’s fattest child has lost an astonishing 17 stone in four year.

The pictures of Arya Permana were posted online by Ade Rai, a bodybuilder and personal trainer to the now-14-year-old, who hails from Indonesia.

Arya Permana, once known as the world’s fattest child, has showed off dramatic weight loss after dropping from 30 stone in 2016 to 13 stone today (pictured) 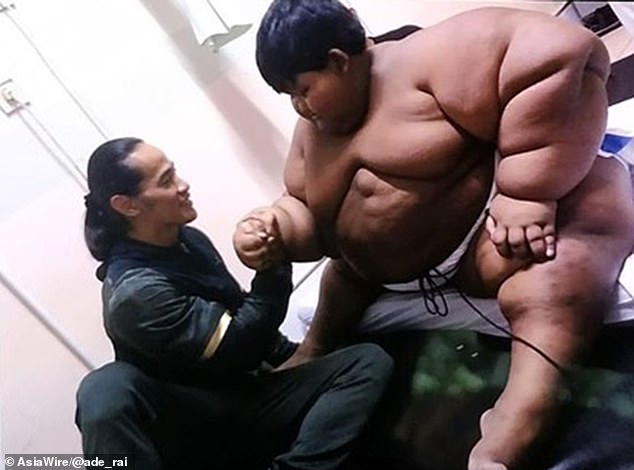 Arya’s progress was showed off by trainer Ade Rai, an Indonesian bodybuilder who agreed to work with the boy after news of his weight spread

Footage initially shows Arya struggling to perform simple tasks such as standing up and sitting down, and hitting a punching bag.

Now, he is able to lift weights alongside Ade as the pair do their weekly workouts.

He also looks unrecognisable from the child he was four years ago.

Ade, 49, told the Jakarta Post: ‘I only support him. He likes sports. When he was still very fat he liked soccer.

‘The kind of support that I can give him is to share with his parents about the importance of keeping to a good diet and their motivation to support Arya.

‘Arya is now a symbol of hope. People now say: Even Arya can lose weight, so why can’t I?’ 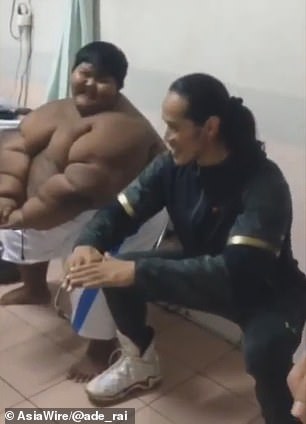 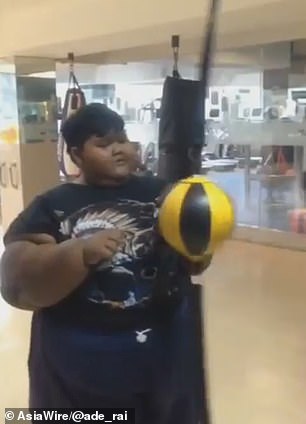 Ade also shared video showing how Arya struggled with simple tasks, such as standing up and sitting down and hitting a punching bag when he was at his heaviest

While exercise has formed party of Ayra’s weight loss, the teenager has also undergone bariatric surgery to reduce the size of his stomach and curb his appetite.

The surgery produced a dramatic loss in weight, bringing him down from over 150kgs to 87kgs.

Exercise and a healthier diet then reduced his weight further to 83kgs, while he is hoping to lose more in the future.

Surgeons who have been monitoring Ayra’s case say he will need to undergo operations to remove excess skin from his arms, chest and stomach which will reduce his weight further.

Ayra was born a normal weight at 8lbs, and maintained it throughout most of his childhood, according to his parents. 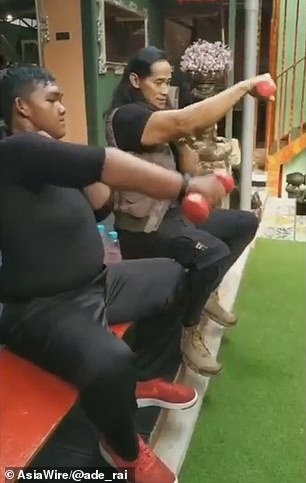 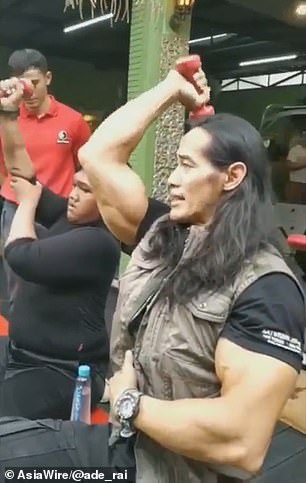 Now, Arya is able to lift weights alongside Ade after losing 17 stone. He will need to undergo at least two surgeries to remove excess skin, dropping his weight further

But the situation began to spiral out of control in 2014, when he turned eight, and his appetite suddenly increased.

In just two years he gained an incredible 11 stone in weight, leaving him ‘the world’s fattest child’ at 30 stone.

After his case caught international attention, Indonesian officials stepped in to help.

He said: ‘Aria managed to lose weight through bariatric surgery, diet and regular exercise. For me, they are all good and supportive of each other.’