Airspeeder, a flying racing car that can go from 0-62 miles per hour in just 2.8 seconds akin to Formula One racing cars, has had a successful dual test run for the first time.

The test flight of two unmanned Airspeeder vehicles, in skies over an undisclosed location near Adelaide, South Australia at the end of September, marks the first time two units have taken to the air together.

This is an important milestone because Airspeeder has been designed to race other vehicles in the air in close proximity.

Airspeeder is an electric ‘octocopter’ craft being assembled in Adelaide by Alauda Aeronautics, as a mixture of helicopter, fighter jet and Formula One car.

This model, unveiled in February this year and currently going through the testing phases, is the third Airspeeder prototype, called Mk3.

The first crewed Airspeeder electric flying car Grand Prix – featuring actual people in the cockpit this time around – is set to follow in 2022.

Alauda Aeronautics, the creator and technical team behind Airspeeder, the world’s first racing series for flying electric cars,  made a test flight of two of the vehicles together

The Mk3 Airspeeder was unveiled back in February this year.

The 287 lbs (130kg) racer sports a carbon fibre shell, eight rotors — providing stability, even in the event of a blade failure — and easy-to-replace battery packs whose power delivery profiles can be fine-tuned as required by a given racecourse.

According to the developers, the speeder is capable of climbing to a height of 1,640 feet (500 metres).

It can also turn much faster than a traditional fixed-wing aircraft or helicopter, with a thrust-to-weight ratio of 3.5, nearly three times that of an F-15E Strike Eagle, one of the most advanced fighter jets in the world.

At 0-62 miles per hour in just 2.8 seconds, the Airspeeder gets off to a faster start than both a Lamborghini Huracan Evo and Ferrari 812 Superfast.

Lewis Hamilton in a Mercedes F1 car would be able to get to 62 miles per hour in around 2.6 seconds.

The aim of the Airspeeder team is to have human pilots in the cockpit for a crewed racing series – something of an airborne Grand Prix – across the globe next year.

Prior to this, several Airspeeders will be remotely flown on augmented reality sky-tracks as part of the ‘EXA Series’ before the end of this year.

‘Racing provides the place and space for long-promised electric flying cars to develop,’ said Matt Pearson, founder of Airspeeder, which has offices in Adelaide and London.

‘Key to this is creating systems and technologies that ensure they can fly in close-proximity safely.

‘These landmark first dual-racecraft flights don’t just showcase how incredible our upcoming races will look but they lay the foundation for the introduction of flying cars to cities everywhere.’

The dual test flights ‘offer a glimpse of what a dual-style race will look like’ in the forthcoming EXA remotely-piloted racing series, set to happen later this year. Exact dates will be announced soon, an Airspeeder spokesperson told MailOnline.

It will feature remote-pilots drawn from motorsports and civil and military aviation backgrounds, all battling it remotely as they control their own Airspeeder vehicle.

Remote pilots of the Mk3 race car will sit in a simulator that mimics the dynamics and ergonomics of the cockpit itself, while the ‘Aviator’ robot onboard will turn its head when the pilot turns theirs. 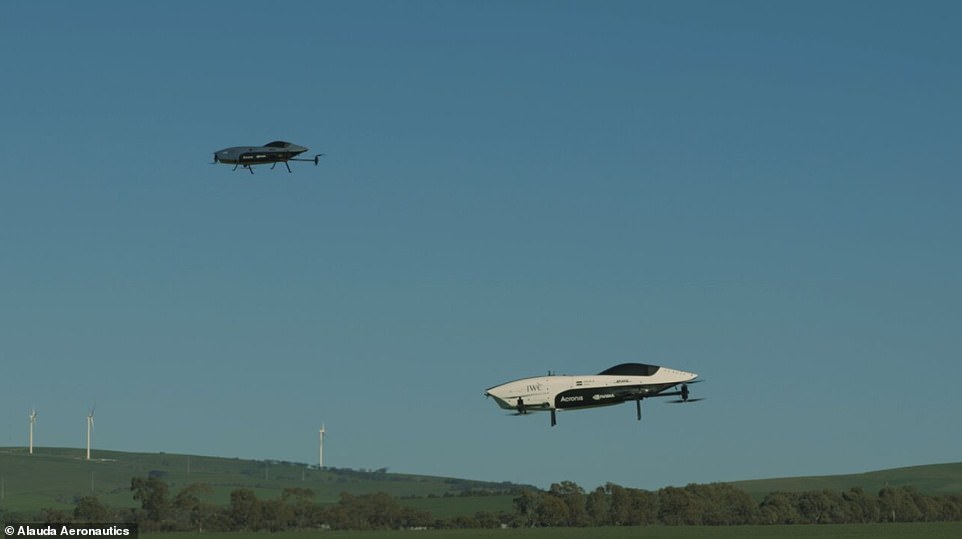 The Airspeeder is seen here in South Australia during the dual test flights. Although one is grey and the other is white, they just have different livery; both are the same model 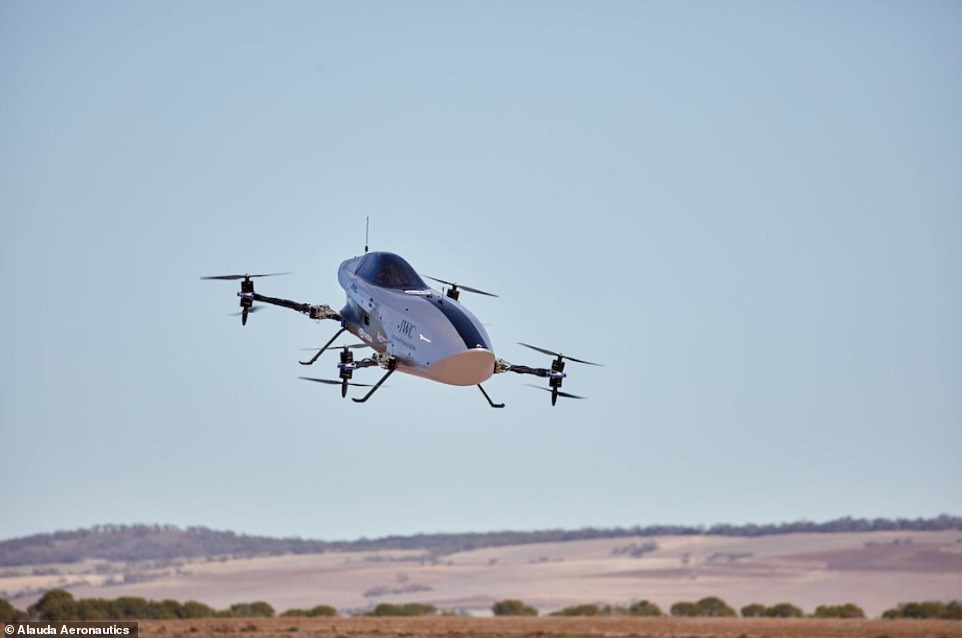 ‘EXA delivers on the promise of a future first shown in science fiction,’ said Matthew Pearson, founder of Airspeeder and Alauda Aeronautics.

The craft is powered by a lithium polymer battery which allows it to fly for about 15 minutes. Each race will last 45 minutes, which means two motorsport-style pit stops will be required to change the battery within 20 seconds.

The crewed Airspeeder electric flying car Grand Prix – featuring actual people in the cockpit this time around – is set to follow in 2022. 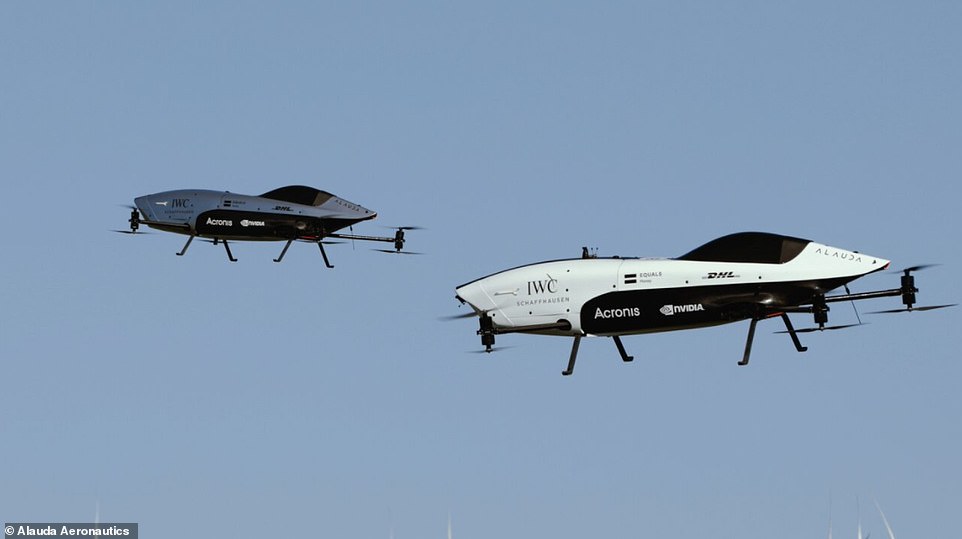 The test flights of the Airspeeder vehicles, in skies over an undisclosed location near Adelaide, South Australia, mark the first time two of the flying racing cars have taken to the air together 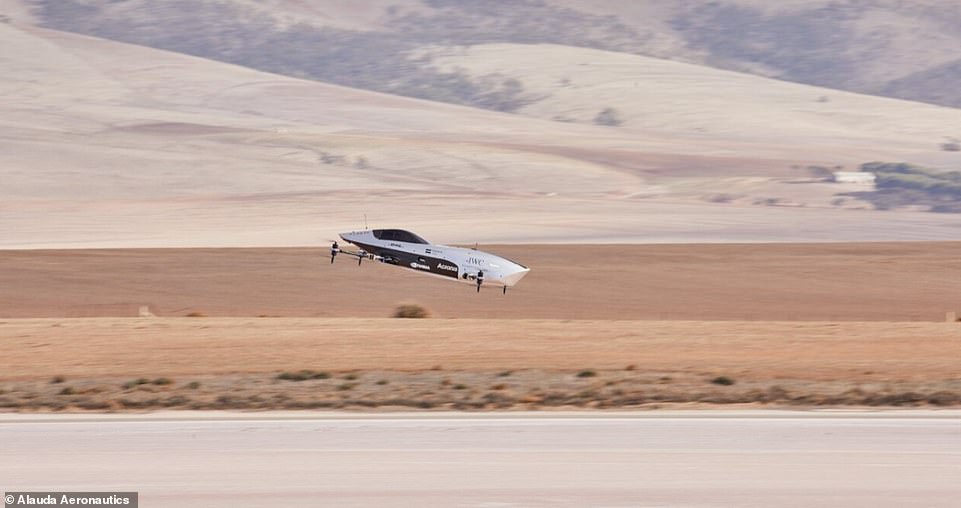 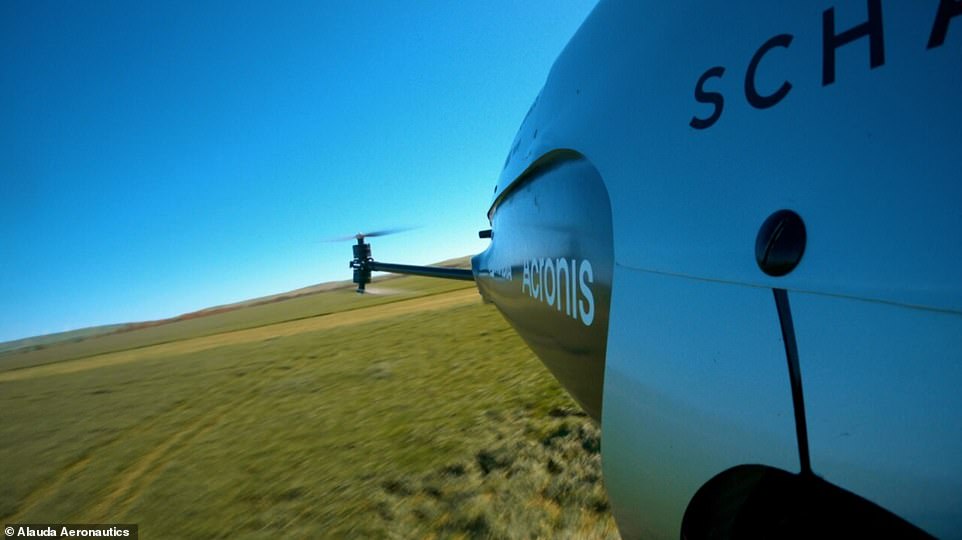 The craft is powered by a lithium polymer battery which allows it to fly for about 15 minutes. Each race will last 45 minutes, which means two motorsport-style pit stops will be required to change the battery

Airspeeder is defined as a vertical take-off and landing (eVTOL) aircraft, which can take off straight up into the air, reducing the need for runway space.

Alauda Aeronautics confirmed back in May that Airspeeder had entered production. When MailOnline asked how much the racers cost to produce, Airspeeder said that information was confidential between the company and the racing teams.

Unfortunately, Airspeeder’s missions have not gone totally smoothly; in July 2019, an Airspeeder Mk2 prototype went out of control at the Goodwood Aerodrome, West Sussex.

The craft – which was being controlled remotely – soared some 8,000 feet up into a Gatwick Airport flight path before crashing near houses in Chichester.

A report by the Air Accidents Investigation Branch said the 200 invited guests who were mostly watching from a rooftop terrace were ordered to ‘take cover’ inside the building.

According to Alauda Aeronautics the Airspeeder Mk3 is a ‘giant technical leap’ in the development of the world’s first racing series for electric flying cars.

This remotely-piloted vehicle is the final iteration of an electric flying racing car before the introduction of manned racing craft, the Airspeeder Mk4, due to debut in 2022.

The craft, which will be operated by an expert remote operator from the ground, features a suite of technologies and engineering elements never before seen on an eVTOL craft.

These innovations will be validated in this key unmanned proving phase and include LiDAR and Radar collision avoidance systems that create a ‘virtual forcefield’ around the craft to ensure close but ultimately safe racing.

The Mk3 features a carbon fibre frame and fuselage chosen for its strength, stiffness and lightweight properties, which ensures manoeuvrability, performance and efficiency.

The carbon fibre frame and fuselage adds a vital mechanical layer of safety, which will be further enhanced by a full carbon fibre monocoque body to be introduced on the Mk4 vehicle.

The MK3 powertrain represents a significant upgrade on the Mk2 proof of concept vehicle, with power increased by 95% with only a 50% increase in weight.

A 96 kW electric powertrain already sees the Mk3 operating with a thrust to weight ratio above two, on a craft that weighs just 100KG unmanned. The Mk3 speeders will fly at speeds in excess of 75mh.

The Mk3 speeders are laid-out in an ‘octocopter X formation’. This provides significant advantages to pilots in terms of maneuverability and stability.

When racing the pilot will be able to make the same sharp hairpin style turns as a Formula 1 car but with the added third dimension of being able to move vertically.

The octocopter configuration also adds an important measure of vehicle redundancy and will ensure the craft can safely land and remain in control should a rotor or battery system fail.

To facilitate this, Alauda’s engineers have developed an innovative ‘slide and lock’ system for the rapid removal and replacement of batteries when on the ground, this technology debuts on the Mk3.

A strategic layer is added to the sport with this approach as teams will be able to adapt battery strategy depending on the dynamic requirements of that particular section of the race.