Thousands of tattoo enthusiasts showed off their colourful and intricate inkings today as the one of the world’s largest body art conventions kicked off.

The three day event held at the Tobacco Dock in Wapping, London, sees people from across the world gather to marvel at each others impressive designs and even get some new work done.

Now in its 15th year, the International London Tattoo Convention hosts more than 400 renowned artists from counties such as South Korea, Germany and Spain.

Organisers describe the weekend event, which also features live music and trade stands, as ‘the most exciting, anticipated and resoundingly successful celebration of body art in the world’.

Some of the visitors arriving today were seen covered in impressive designs including faces, flowers and animals, while others had a range of piercings and one man sported a Lord of the Rings themed back piece.

During the weekend a competition is also ran offering visitors the chance to offer their opinion on the best piece created during the event, while judges chose the best in categories including Ornamental and Realism.

Thousands of people have shown off their intricate and colourful body art at the International London Tattoo convention in Wapping today. Pictured is Zombie Punk, from Brazil, with ink on his arms, chest and body along with several facial piercings 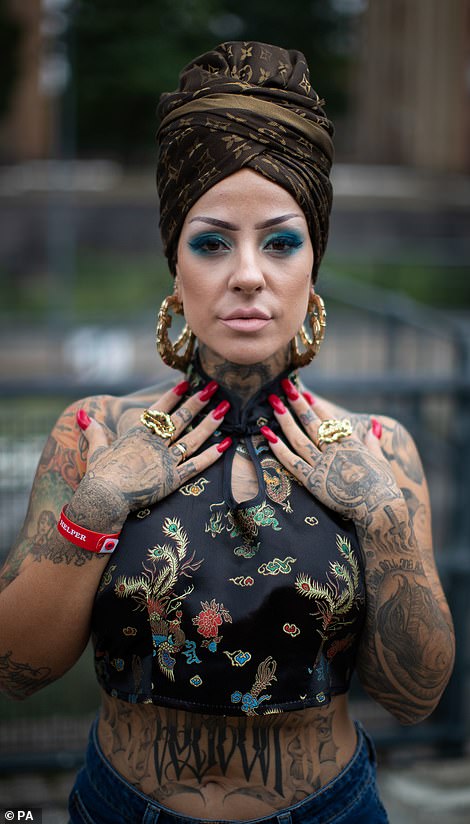 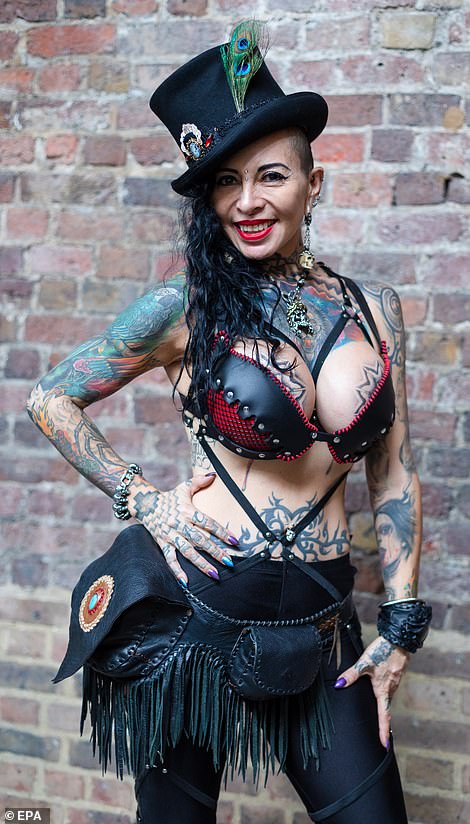 More than 400 world renowned artists will be at the weekend event. Artist Nora Caliani from Madrid was seen with tattoos all over her arms and stomach at the convention and artist Black Widow from Costa Rica, right, also posed for a portrait today 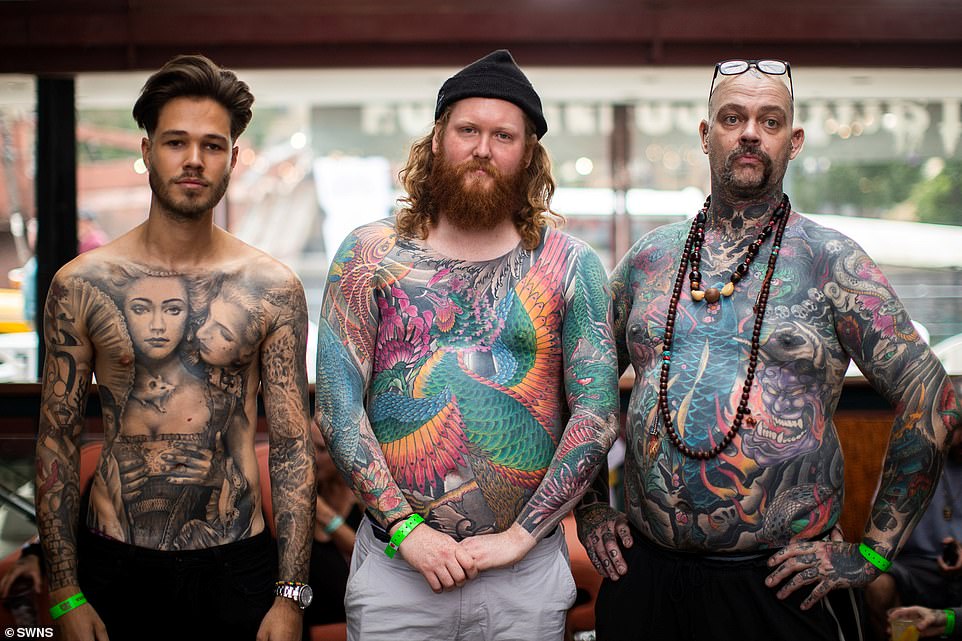 Three men, including two with coloured tattoos and one with black and white images across his stomach and arms, posed for a picture at the convention which is now in its 15th year 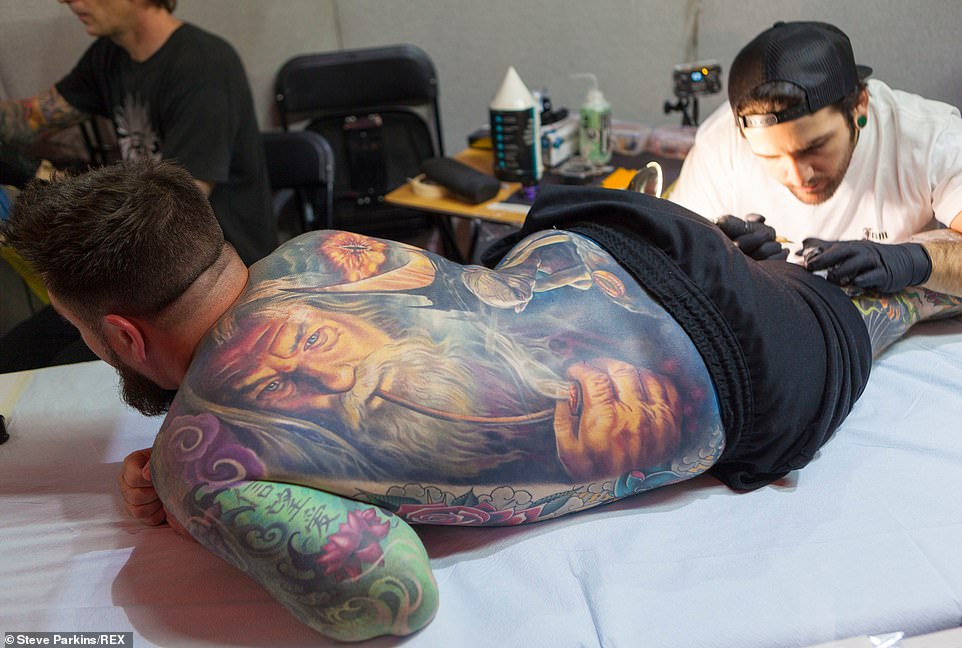 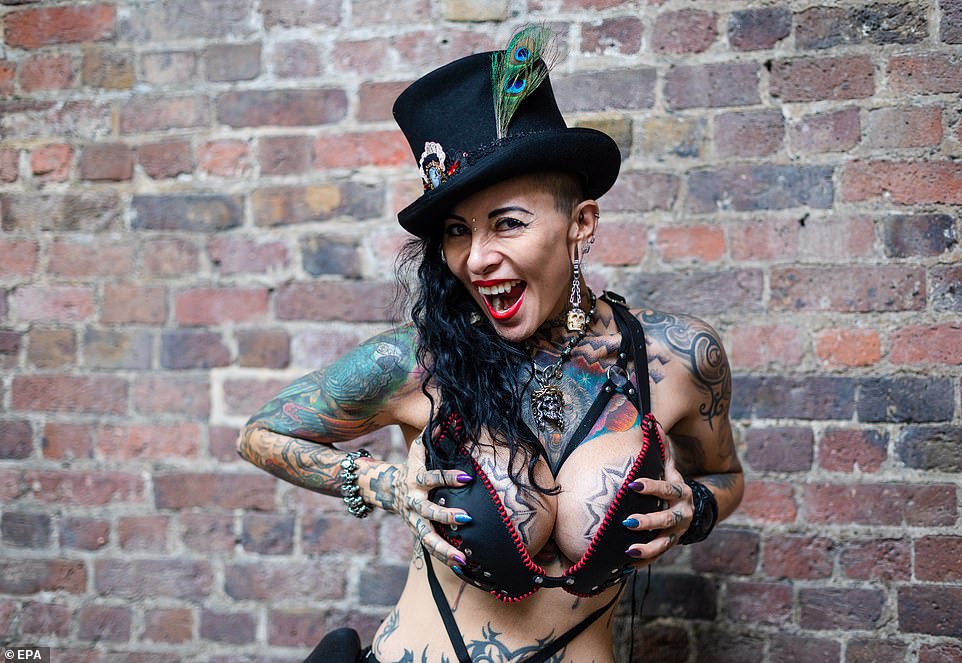 Enthusiast Black Widow from Costa Rica, pictured, is one of the more than 400 tattoo artists appearing at the convention 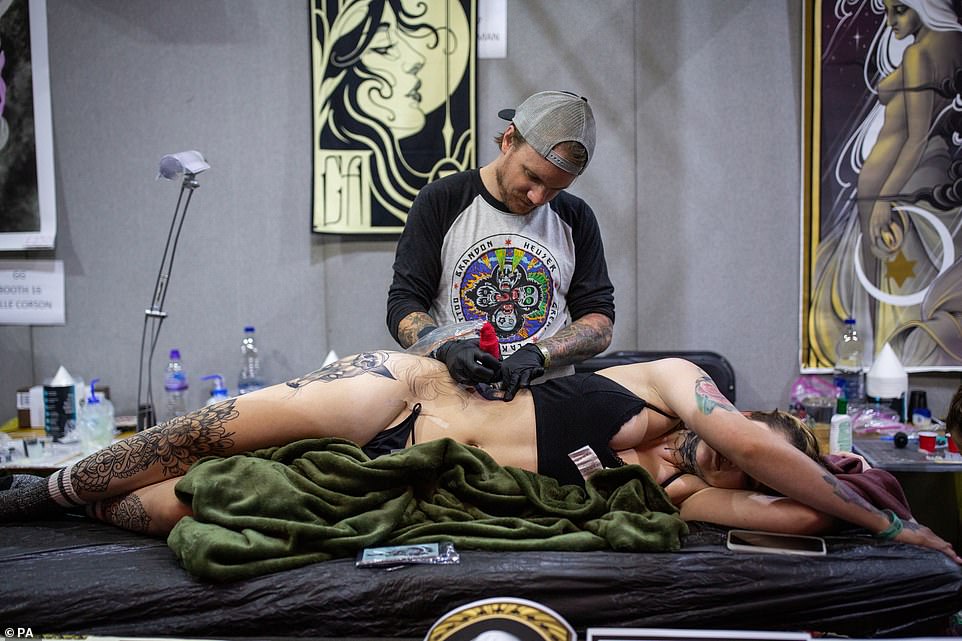 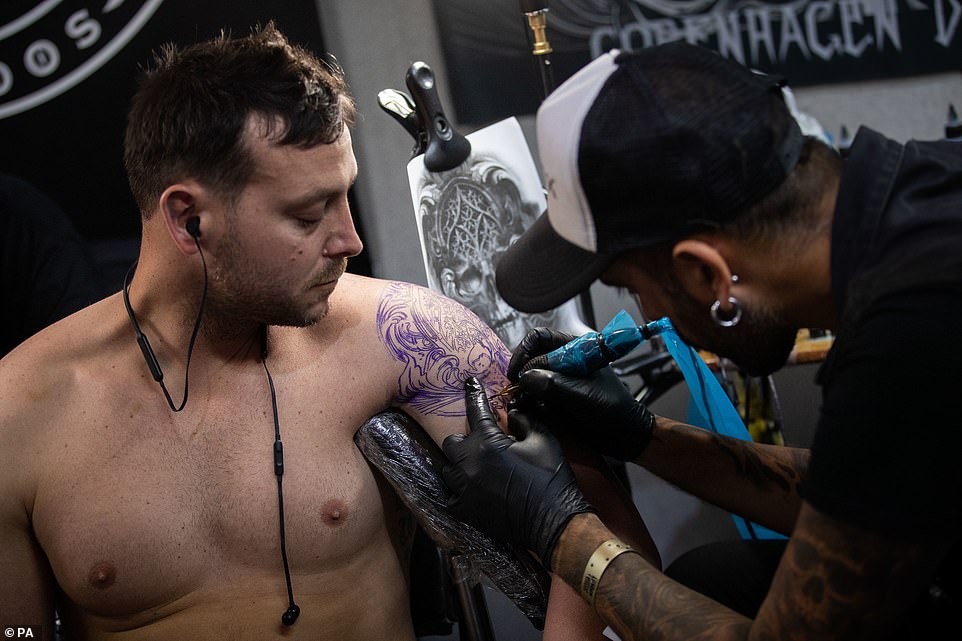 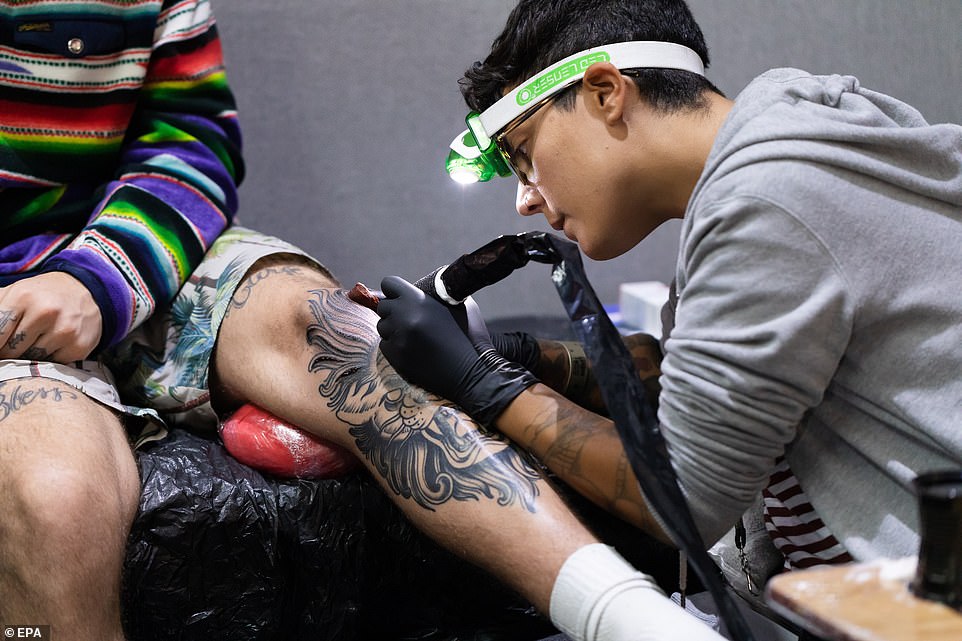 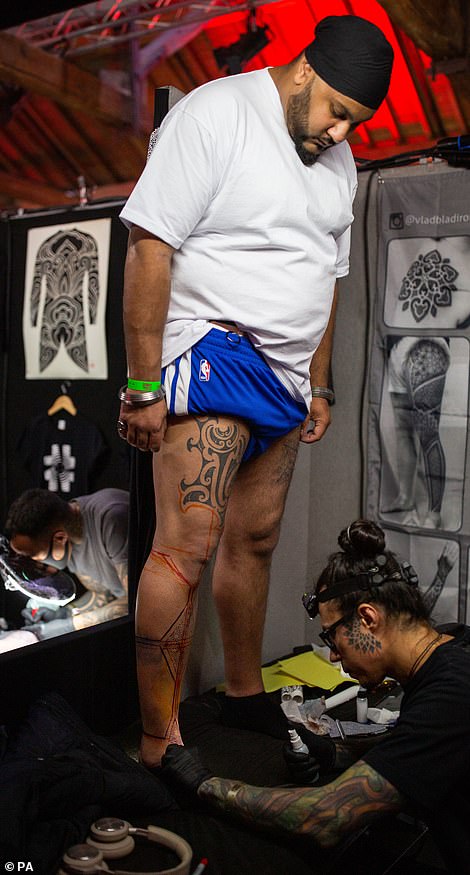 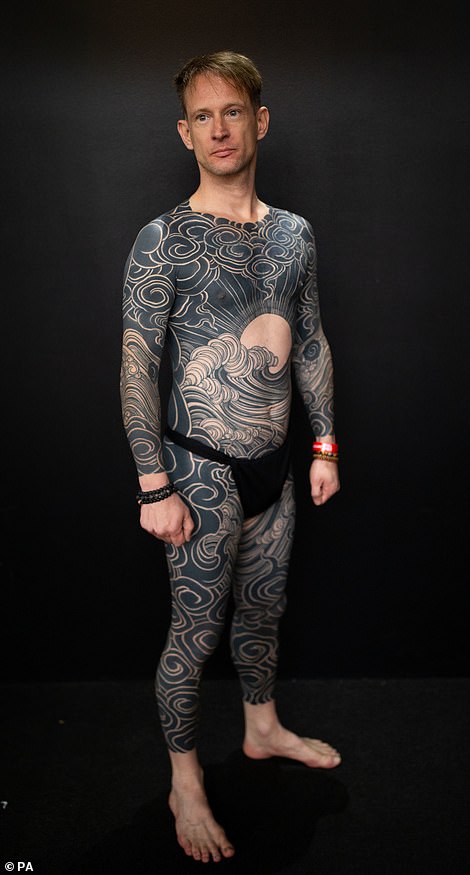 From those just starting out with a few tattoos, left, to others with the majority of their bodies covered, right, all types of body art enthusiasts were seen at the east London convention today 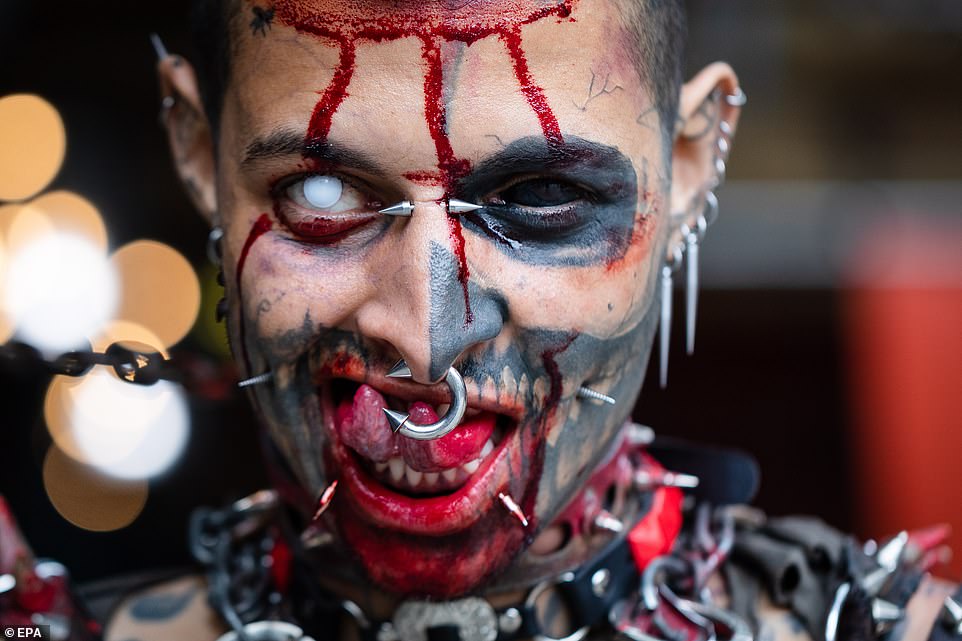 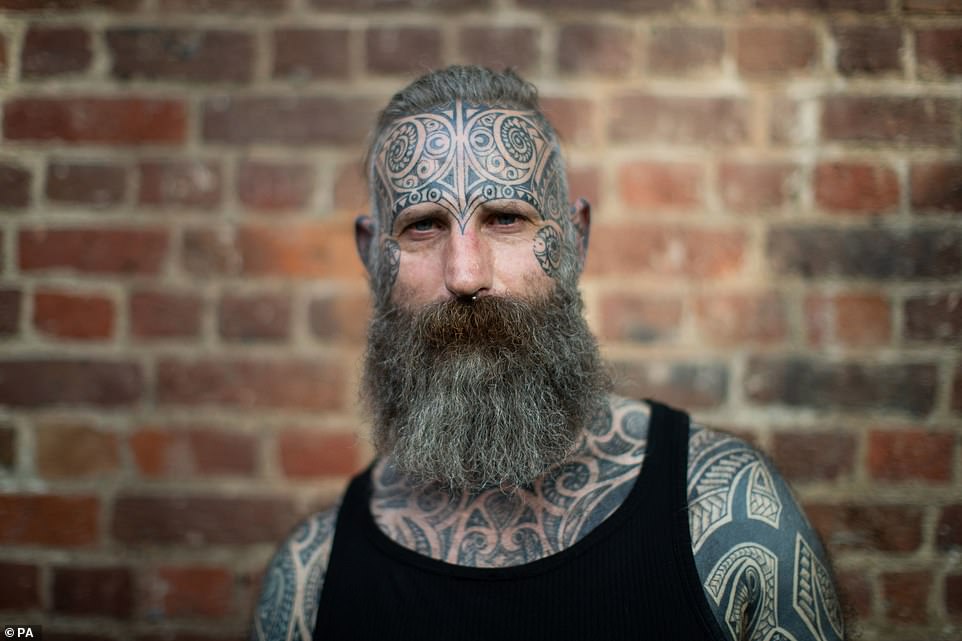 A man showed off his tattoos which frame his eyes, cover his forehead, shoulders and arms at the body art event today 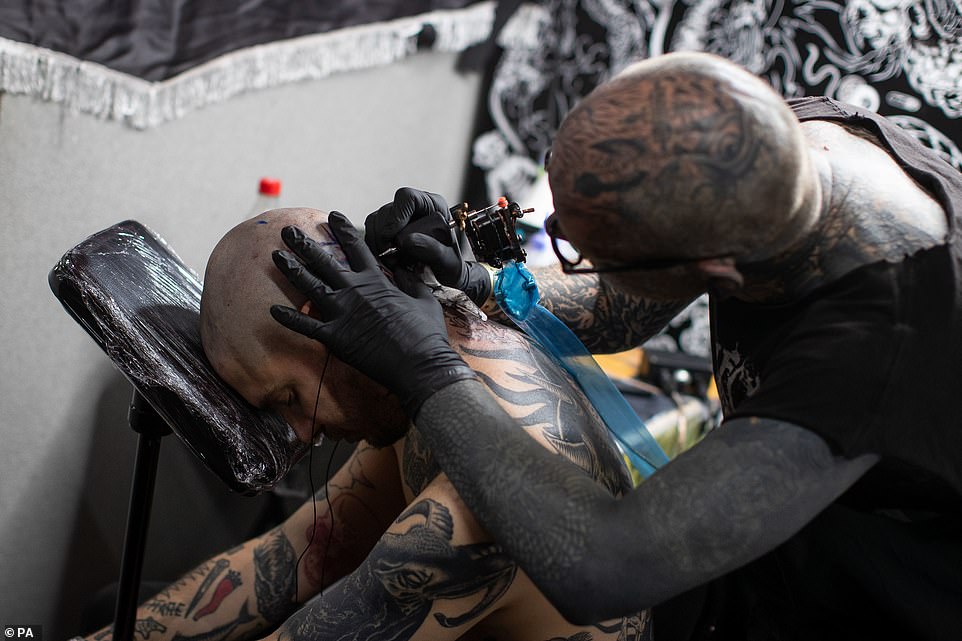 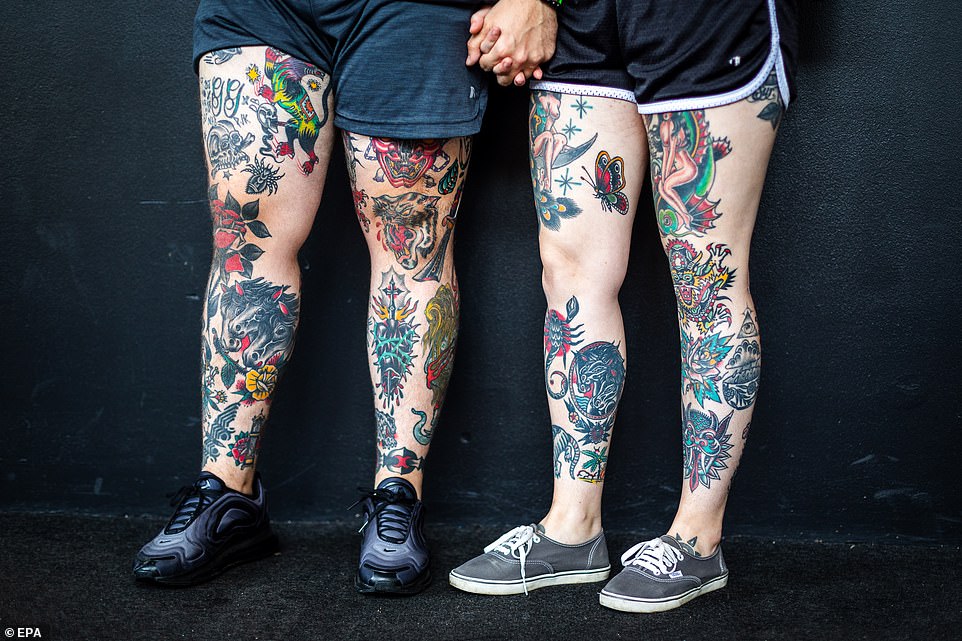 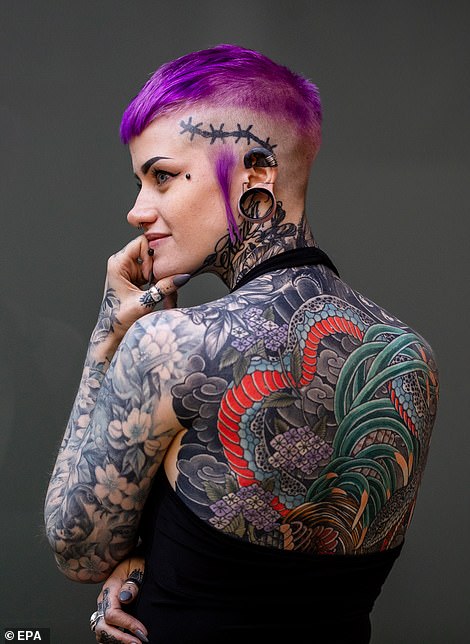 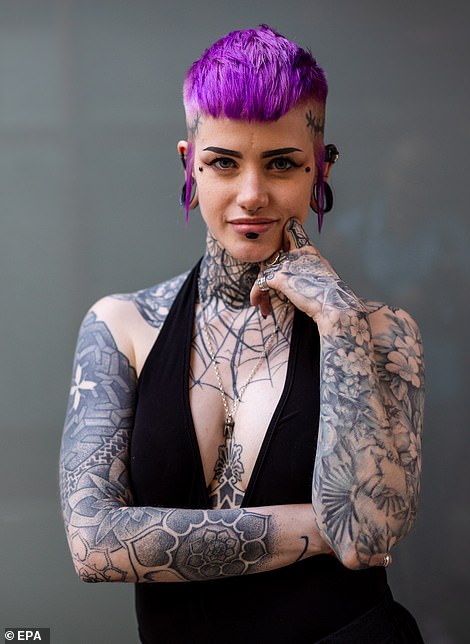 Tattoo enthusiast and artist Lauren Stephens from Newcastle, pictured left and right, posed for a portrait at the annual event 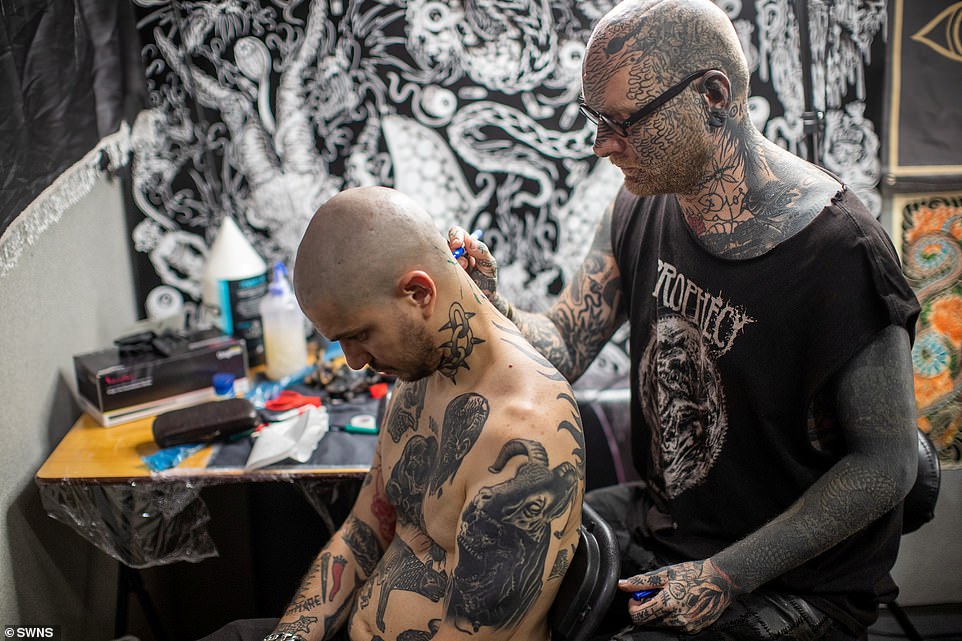 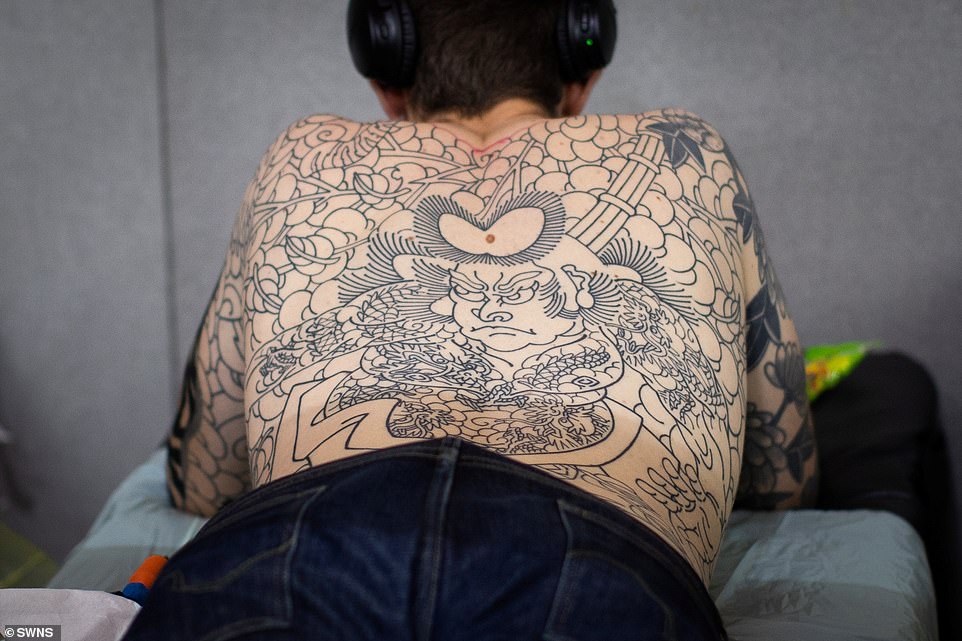 This person showed off their intricate back piece. Over the weekend a competition will be held to find the best pieces created during the event 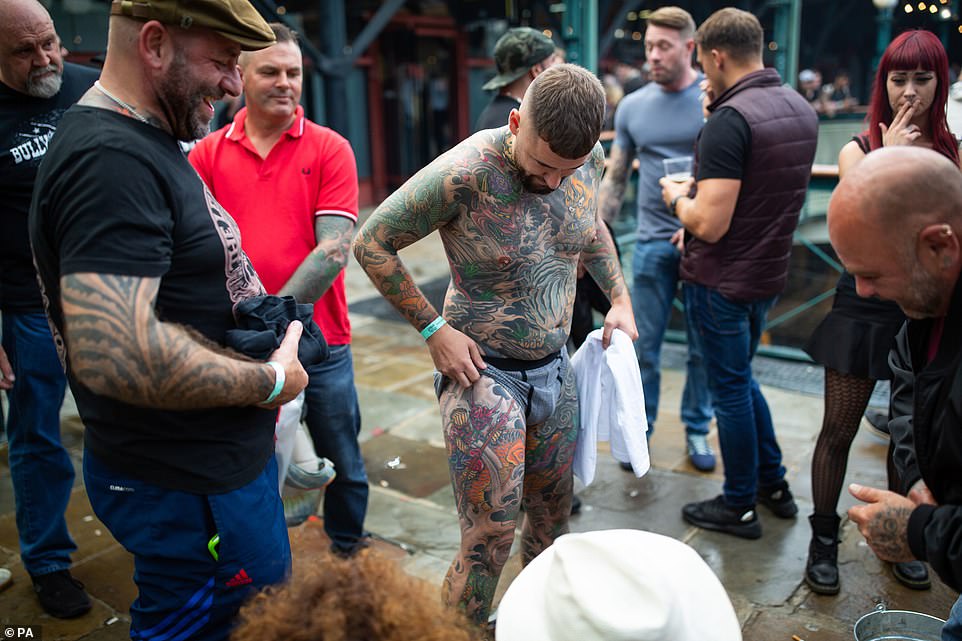 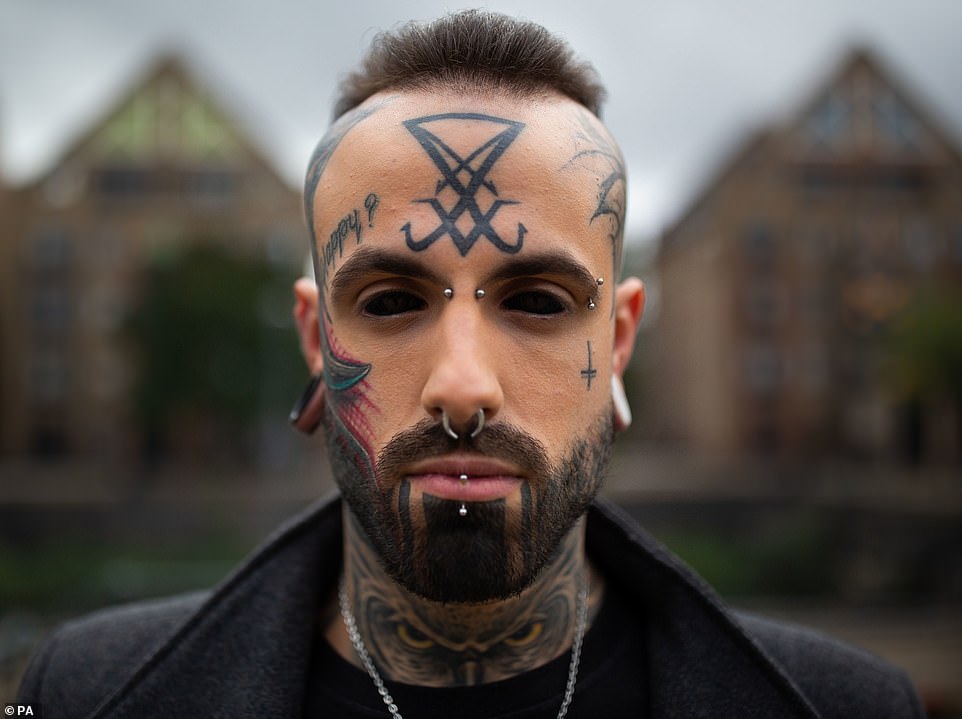 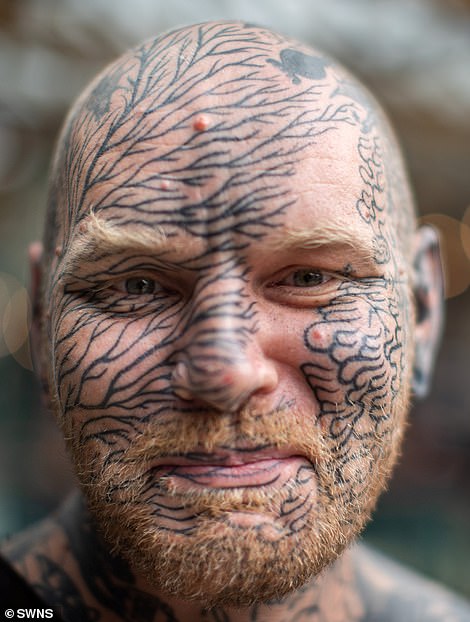 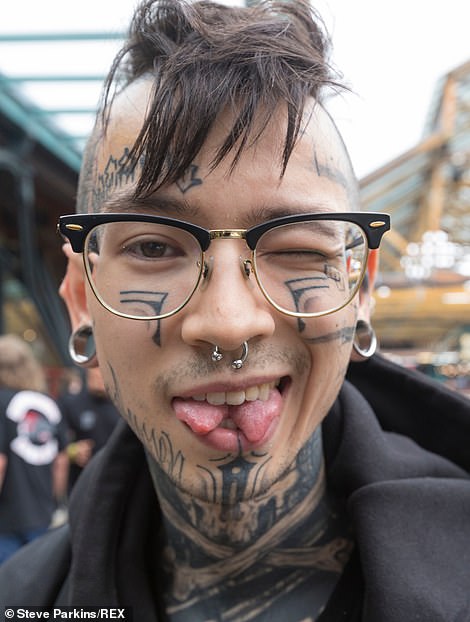 Several people, left and another right with a tongue split as well, were seen with tattoos on their faces and covering the majority of their bodies today 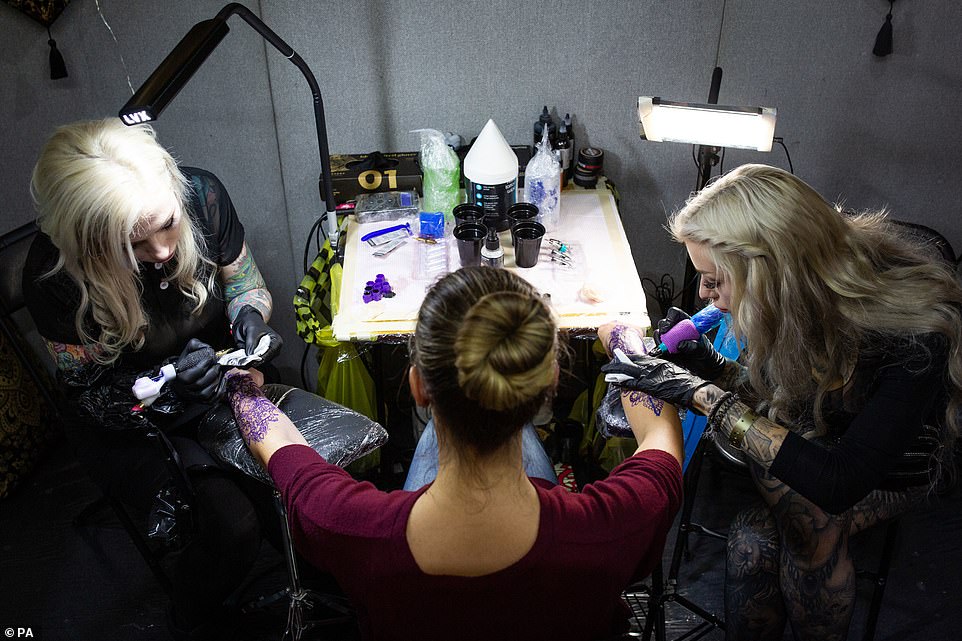 Double speed! This woman let two tattoo artists work on her arms at the same time during a sitting at Tobacco Dock today 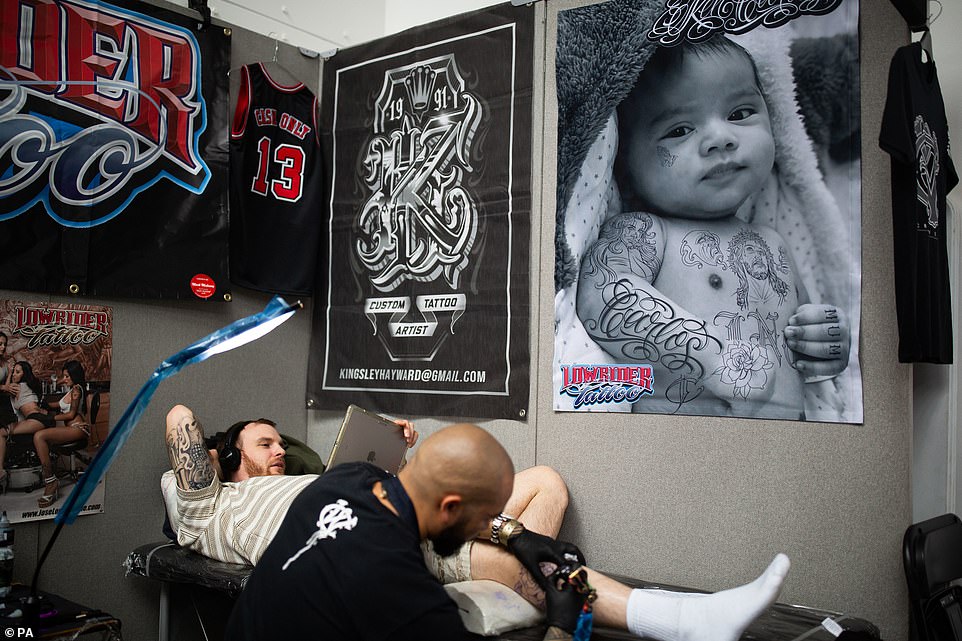 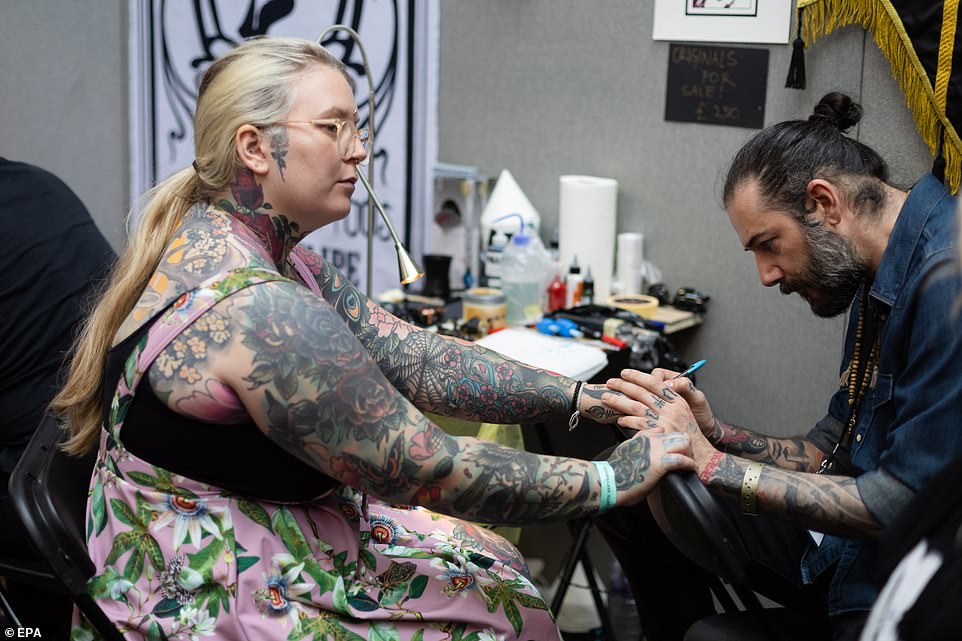 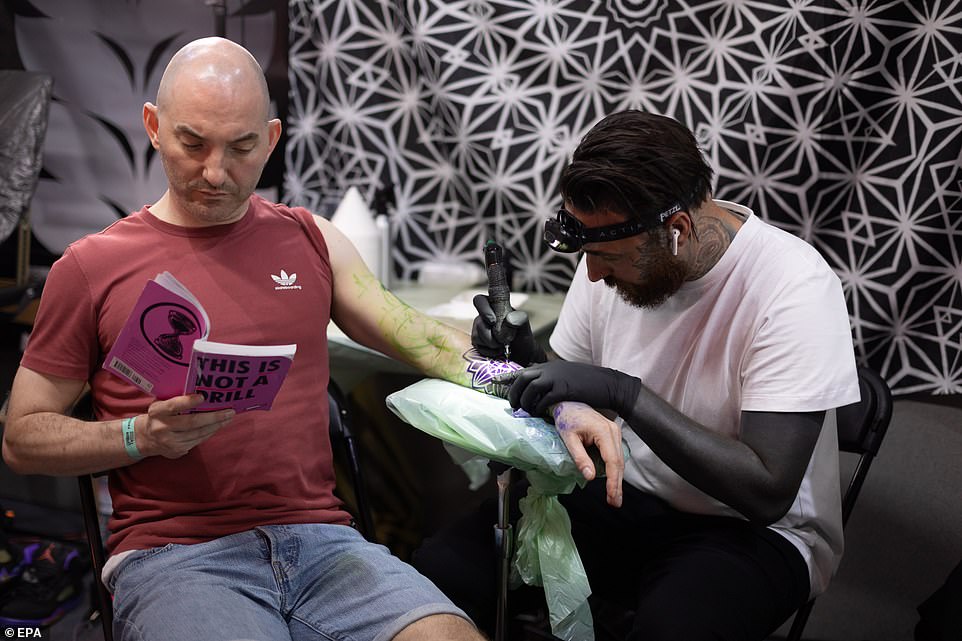 A relaxed tattoo fan read his copy of This Is Not A Drill: An Extinction Rebellion Handbook during the inking session today 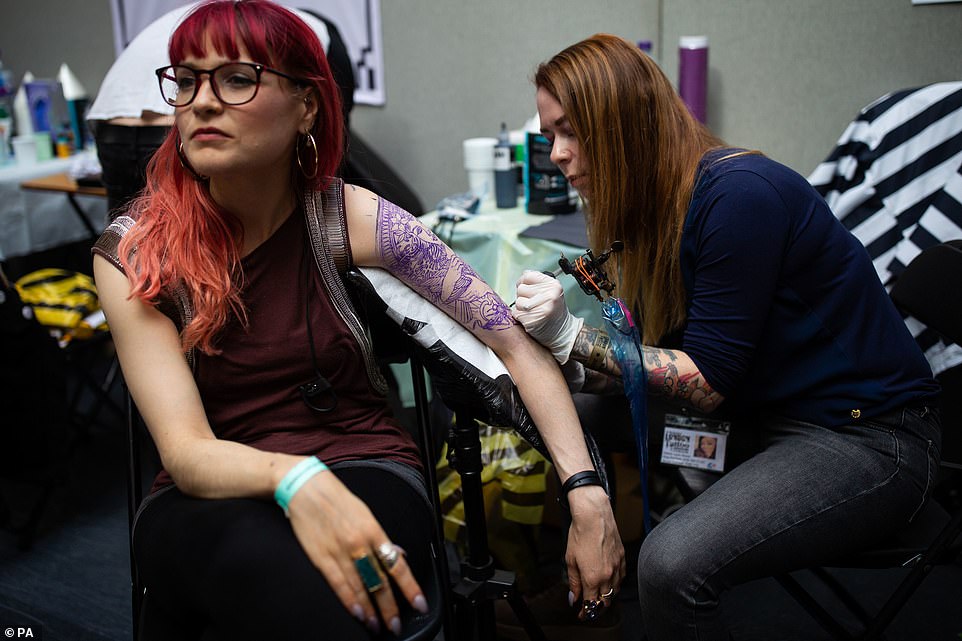 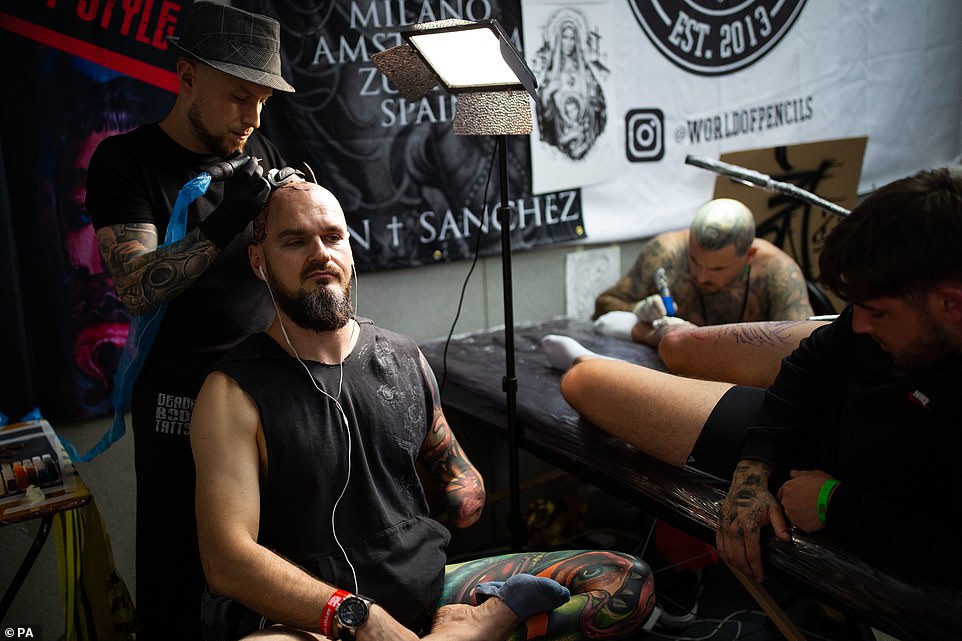 Two men were tattooed at the same time today, with one getting ink on his head and the other on his right lower leg 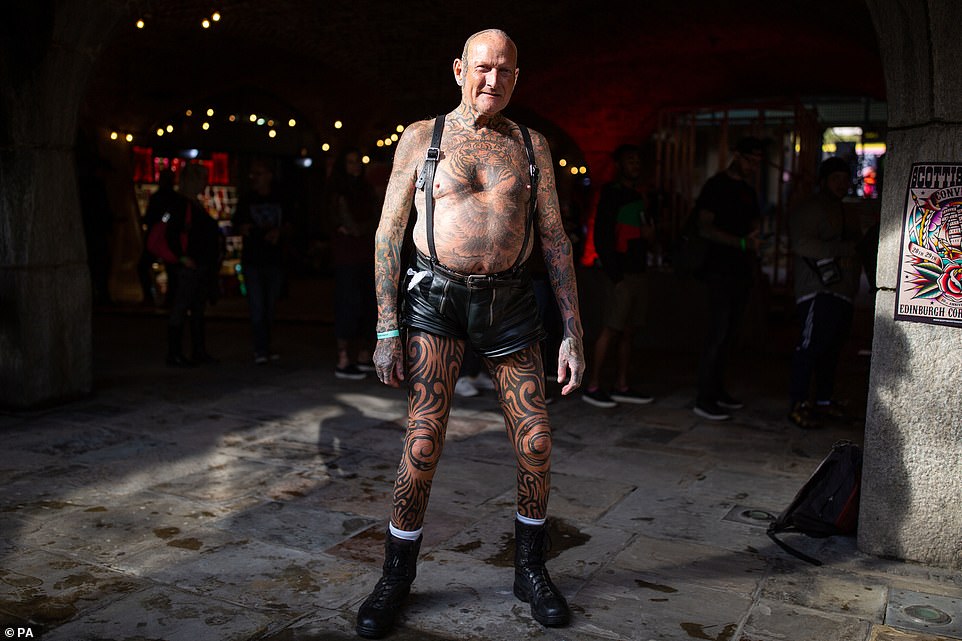 Colin Snow showed off his ink today at the east London event which covers his arms, legs, stomach and some of his head 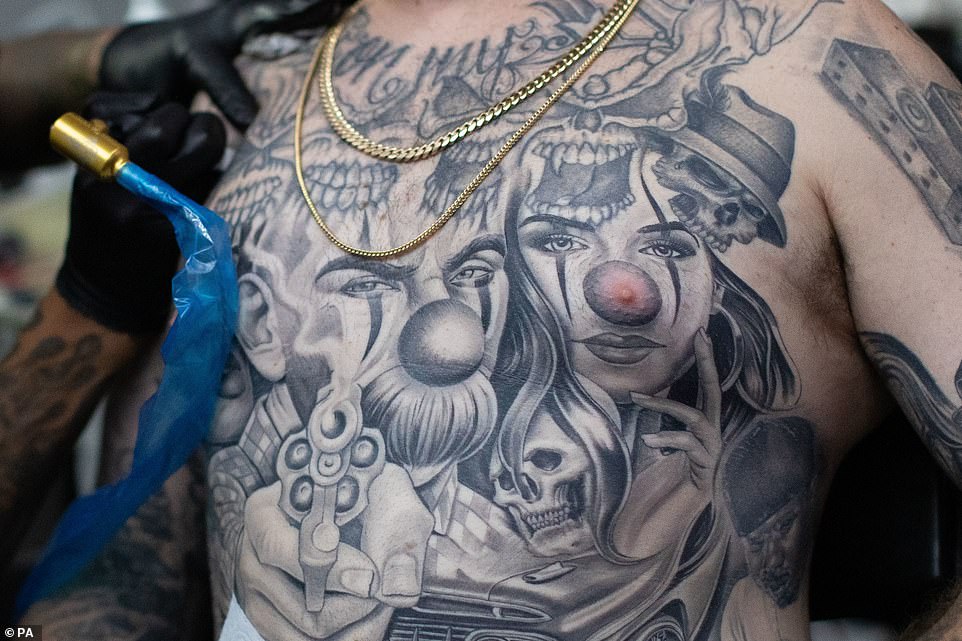