World’s largest hailstone wider than a football fell in Argentina

A ferocious storm over Argentina two years ago produced the world’s largest hailstone, about the size of a football, scientists report.

Hail over the heavily populated city of Villa Carlos Paz, Córdoba Province, Argentina in 2018 smashed the world record for the largest hailstone, US researchers claim.

The biggest stone in the storm measured up to 9.3 inches (23.6cm) in diameter, which, if verified, would have beaten the current world record of eight inches.

While the 9.3-inch stone was not preserved and cannot be officially verified as a record breaker, researchers also report a 7.1-inch stone from the same storm.

The hail in the storm was so large that scientists suggest a new category to describe stones bigger than six inches – ‘gargantuan’ hail.

A gargantuan hailstone that fell in Argentina may have set a world record, according to researchers. This is one of three hailstones recorded during the storm over Villa Carlos Paz, called ‘Victoria’s hail stone, measuring around 7.1 inches

Any hailstone more than six inches in diameter can cause severe physical damage to houses and cars, as well as being capable of knocking someone unconscious with a direct blow to the head.

Researchers say the public needs to be aware how big these natural blocks of ice can reach – not just in the US, which is famed for its large hail.

‘It’s incredible – this is the extreme upper end of what you’d expect from hail,’ said Matthew Kumjian, associate professor at Penn State University in the US.

‘Such a well-observed case is an important step forward in understanding environments and storms that produce gargantuan hail, and ultimately how to anticipate and detect such extreme events.

‘Anything larger than about a quarter of that in size can start putting dents into your car – in some rare cases, six-inch hail has actually gone through roofs and multiple floors in houses.

‘We’d like to help mitigate the impacts on life and property, to help anticipate these kinds of events.’ 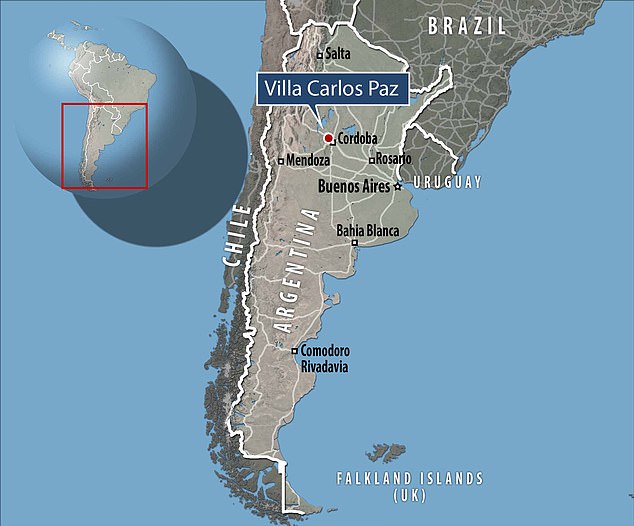 On 8 February 2018, a supercell storm produced gargantuan hail as it moved over the heavily populated city of Villa Carlos Paz in Córdoba Province, Argentina

The hailstone fell during a supercell thunderstorm – the most violent kind of storm characterised by persistent rotating updrafts – that pelted the city centre of Villa Carlos Paz in February 2018.

The team interviewed local residents about their accounts of the storm, and uncovered social media video and photographs revealing the large hail at multiple locations.

In particular, the team looked at three noteworthy hailstones observed by residents – a freezer-preserved 4.48-inch (11.38cm) stone scanned with a 3D infrared laser scanner, a 7.1-inch (18-cm) stone and video of the giant 9.3-inch hailstone.

Using the method of photogrammetry – taking measurements from photographs – scientists estimated that the last hailstone measured between 7.4 to 9.3 inches across.

This would make the hailstone close to or exceeding the world record maximum dimension – however, it wasn’t officially measured or preserved, and the estimate of its size comes from a photogrammetric analysis of a video posted to YouTube and social media and featured below.

Researchers visited the location featured in the video and measured reference objects evident in the frame, such as light poles, widths of the green awning supports, size of sidewalk tiles and depth of the curb.

‘We also placed rulers in the street at the estimated impact location of the hailstone, and took photographs from the estimated location and vantage point of the videographer,’ the team report in the Bulletin of the American Meteorological Society,

‘This allowed us to conduct the frame-by-frame photogrammetric analysis to estimate the hailstone’s size.’

A hailstone that fell near Vivian, South Dakota in the US in July 2010, measuring eight inches across, or about the size of a volleyball, holds the current record.

The National Oceanic and Atmospheric Administration, reporting on the Vivian hail stone at the time, said it was the largest in diameter and heaviest every recorded in the US.

The Vivian stone itself displaced the previous hailstone record for diameter, which was 7 inches for a hailstone found in Aurora, Nebraska, in 2003.

Globally, there is a report of a hailstone in Bangladesh in 1986 that was recorded to have a mass of 1.02 kg – which is ‘probably the world-record for mass,’ Professor Kumjian said. 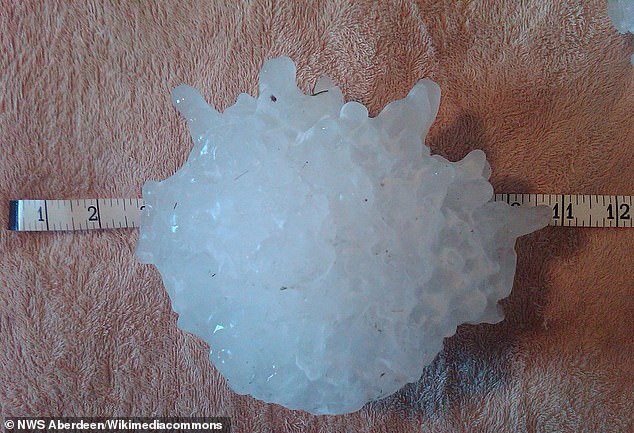 ‘There are unconfirmed reports of larger stones in terms of maximum dimension and mass from elsewhere, including China, but it is hard to verify these,’ he said.

Winds hold hailstones in the air long enough to grow in sub-zero temperatures high in the atmosphere, but predicting the size of the stones remains challenging, the scientists said.

Paper co-author Rachel Gutierrez found a connection between how fast a storm is spinning and larger hail size, but much remains unknown about the relationship.

The fact that a new giant hailstone has been reported from a storm outside the US is ‘invaluable’, she claims.

‘There typically isn’t a lot of data from storms outside the US,’ Gutierrez said.

‘Having this shows us these crazy, high impact events can happen all over the world.’

The researchers say more volunteers are needed to report hail and help provide accurate measurements at the scene.

They can do this with a common item for scale, such as a ruler, but even just video and photo posted to social media at the time is a valuable form of citizen science.

HAIL IS SOLID PRECIPITATION IN THE FORM OF ICE BALLS

Hail forms in thundercloud when drops of water are continuously taken up and down though the cloud by updraughts and downdraughts.

When they go to the top of the cloud, it is very cold and they freeze.

As the updraughts in thunderclouds are very big, they can keep these hailstones for a long time, so they get larger and larger by becoming coated with more and more ice.

When the hailstones get really big, the updraughts in the cloud cannot hold them up anymore and they fall to earth.

By this time they are big balls of ice, and don’t have time to melt before they reach the ground.

Hailstones are commonly spherical or conical in shape and most have a diameter smaller than an inch.

The largest hailstones tend to form when shower clouds cluster together to form ‘multicell’ storms, which are common in the US.