Marriage is the most celebrated occasion in many countries around the world.

But marital traditions vary significantly from one culture to the next, with some practicing weird and wonderful customs.

From slaughtering chickens to walking all over your in-laws, FEMAIL takes a look at nine of the world’s most bizarre wedding traditions.

Different cultures partake in a variety of wedding customs, like slaughtering chickens, walking on the in-laws and guests kissing the bride and groom (stock image)

Crying your eyes out – China

Among the Tujia people of China, brides are expected to express excitement about their upcoming nuptials by crying for one hour every day for a month in the lead up to their wedding.

The bride’s female relatives gradually join in along the way, with the mother-of-the-bride starting on day 10 and the grandmother beginning on day 20.

By the end of the month, sisters and cousins are included resulting in the entire matriarchal side of the family weeping as one.

Mongolian couples hoping to get married must first kill a baby chicken together, holding the knife with both their hands when cutting it apart.

The aim is to find a healthy liver.

Once found, the two can set a wedding date. 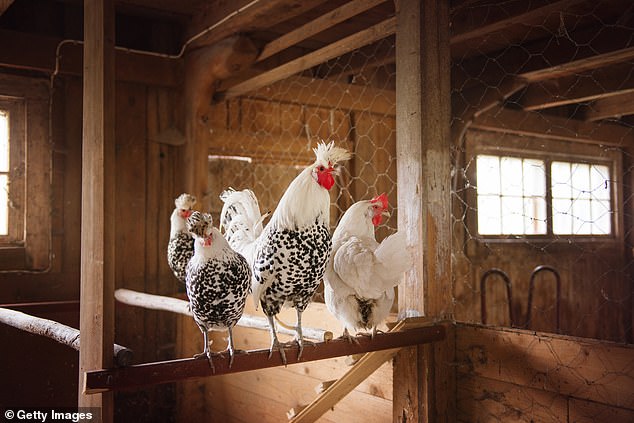 In Mongolia, soon-to-be married couples must slaughter a baby chicken together before setting a wedding date (stock image)

Stepping on the in-laws – French Polynesia

On the Marquesas Islands of French Polynesia, the bride’s family get the short straw.

Once the ceremony has ended, relatives must lay side-by-side, face down on the ground, allowing the bride and groom to walk over them.

The practice symbolises the transition to marriage.

As part of the traditional Falaka ceremony at South Korean weddings, the groom’s relatives and friends hold him down while beating the soles of his feet with dried fish.

In accordance with custom, he’s asked general knowledge questions in between beatings.

The practice is said to improve his memory (and his feet).

Elsewhere in Korean culture, Valentine’s Day is not confined to February 14.

The 14th day of every month holds special romantic significance for couples. 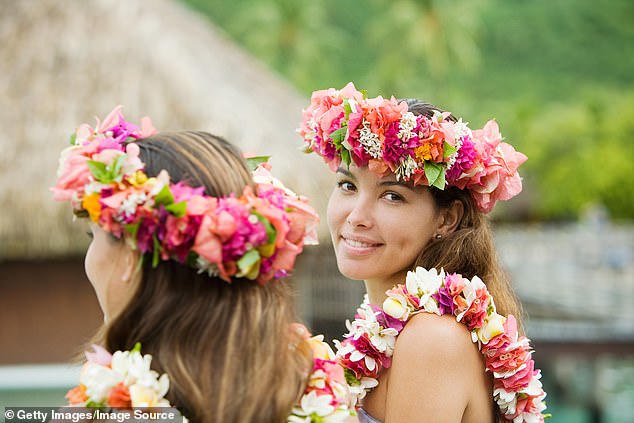 In Jewish tradition, the wedding day is considered a day of forgiveness. Some couples choose to fast until their first meal together after the ceremony.

Unlike many other traditions, a groom seeing his bride before the wedding is not a bad omen in Jewish culture.

Before the ceremony, the groom approaches the bride for the bedeken – veiling – to look at her and veil her face himself, signifying that his love for her goes beyond her physical beauty.

The bedeken also symbolises that the husband and wife remain two distinct individuals even after marriage.

The Ketubah is a Jewish prenuptial agreement outlining the groom’s responsibilities to the bride.

Ketubahs are part of Jewish civil law and lay the framework for marital protection and rights should the couple divorce.

The Chuppah has four corners and a covered roof to symbolise the home a newlywed couple will build together.

In some ceremonies, the four posts of the chuppah are held by family and friends who support the couple’s next chapter in life as husband and wife.

The Jewish bride traditionally circles the groom three or seven times under the Chuppah.

Some sources say this is done to create a barrier of protection from evil, temptation and the eyes of other women, while others believe the circling bride symbolises the creation of a new family circle.

In modern Judaism, both bride and groom circle around one another.

The Seven Blessings come from ancient Hebrew texts and are read in both Hebrew and English.

The blessings focus on love, joy and celebration for the married couple.

8. Breaking of the Glass

At the end of a Jewish wedding ceremony, the groom – and in more recent years, the bride – are invited to step on a glass inside a cloth bag to shatter it.

Some believe the ritual represents the destruction of the Temple in Jerusalem, while others say it demonstrates the multi-faceted nature of marriage and the commitment to stand by each other in hard times and good.

Many Jewish couples keep the shards of broken glass and incorporate them into a memento of the wedding day.

This well-known Jewish wedding tradition happens directly after the shattering of the glass, with guests wishing the couple good fortune.

After the ceremony, Jewish custom dictates that couples spend around 18 minutes together in yichud – seclusion.

The concept is designed to give newlyweds time to privately reflect on their commitment.

Spitting on the bride – Kenya

Among Kenya’s Maasai tribal community, superstition warns against being too supportive of a newlywed couple.

That’s why fathers of the bride spit on their daughters as they leave with their new husband.

Showing too much encouragement is thought to tempt fate in Maasai culture. 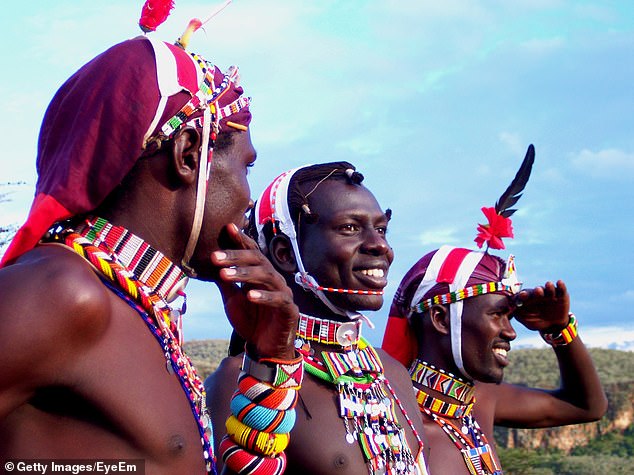 In Maasai culture, showing overt support for a married couple is a bad omen so father’s of the bride spit on the newlyweds as they leave the ceremony (stock image)

Decorated with wheat for prosperity and interlocking rings symbolising faithfulness and loyalty, the karavay is offered to husband and wife.

Whoever takes the bigger bite, without using their hands, is regarded as the head of the family.

Holding it in – Borneo

One tribe in Borneo confines newlyweds to their marital home for three days after the wedding – without access to a toilet.

The bizarre custom of constant supervision and restricted movement is believed to bring the couple good fortune, Lonely Planet reports. 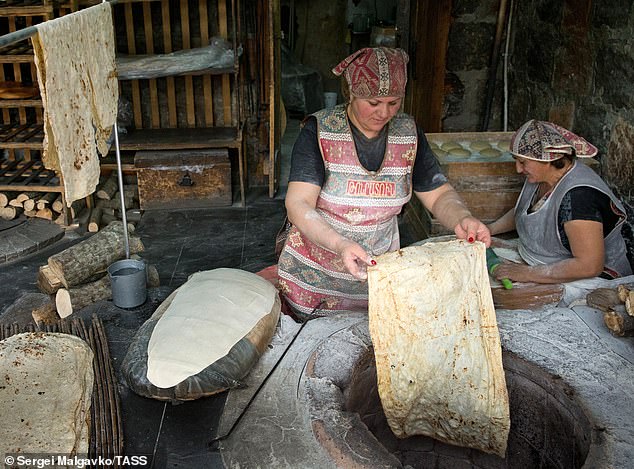 At Armenian weddings, the mothers of the bride and groom place lavash – Middle Eastern flatbread – on the shoulders of the newlyweds as a symbol of wealth and prosperity.

‘You may now kiss the bride’ – Sweden

In keeping with tradition, male guests at Swedish weddings are free to steal a kiss from the bride whenever the groom leaves the table.

Likewise, female guests are free to kiss the groom when the bride’s back is turned.