The earliest evidence of human stomach parasites has been discovered in a pre-historic village in Turkey.

Microscopic eggs from the intestinal parasite whipworm were found in preserved 9,000 year-old faeces and soil samples.

This put them into regular contact with accumulated waste and excrement and made the infections more likely.

The discovery of ancient human parasite eggs from the ancient village of Çatalhöyük is the earliest archaeological evidence for intestinal parasite infection in the mainland Near East.

Archeologists studied ancient human waste as well as soil samples from burials dated to 7,100-6150 BC.

The pieces of preserved excrement, known as coprolites, were taken from a rubbish tip as well as soil formed from decomposed excrement recovered from the pelvic region of humans remains in burials.

Microscopic analysis showed eggs of whipworm were present in two of the coprolites, demonstrating people from the prehistoric village were infected by this intestinal parasite. 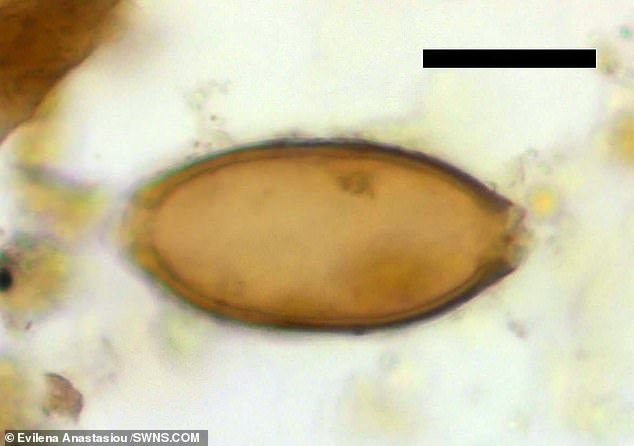 Microscopic eggs (pictured)  from the human intestine parasite whipworm were identified in 9,000 year-old faeces samples and soils from burial sites

Today up to 800 million people across the globe are infected with whipworms.

Whipworm is spread by the contamination of food or drink from human faeces that contain the worm eggs.

They grow to 2 inches (5cm)  in length and live on the lining of the intestines of the large bowel.

A heavy infection with whipworm can lead to anaemia, diarrhoea, stunted growth and reduced intelligence in children.

Researchers think that as hunter gatherer communities turned to farming around 10, 000 years ago, there was a rise in infectious diseases due to increased population size and mobility.

Study leader Dr Piers Mitchell, of the University of Cambridge’s Department of Archaeology, said: ‘It has been suggested that this change in lifestyle resulted in a similar change in the types of diseases that affected them.

As humans roamed around less and built more permanent settlements, it led to the accumulation of human waste as well as higher population size and density.

To determine whether the coprolites excavated from the midden were from human or animal faeces, they were analysed for bile acids at the University of Bristol Mass Spectrometry which confirmed they were of human origin. 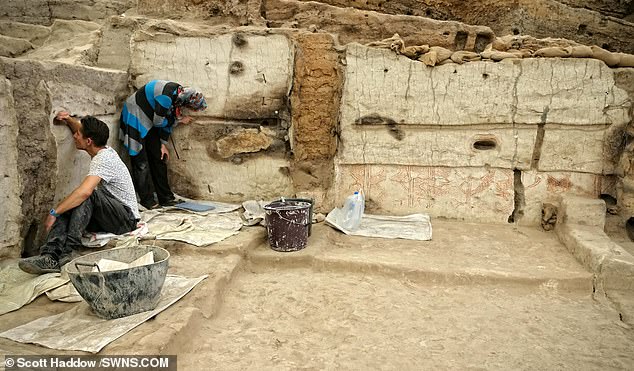 Scientists think such infections increased as hunter-gatherer communities became farmers and came into regular contact with accumulated waste. The image shows the ongoing excavations at the 9,000 year old village of Çatalhöyük in Turkey

It is thought the people living at the early settlement of Catalhoyuk either went to the rubbish tip, or midden, to go to the toilet or carried their waste there in in a vessel or basket.

First author of the study Dr Marissa Ledger said: ‘We would expect this to have put the population at risk of diseases spread by contact with human faeces, and explains why they were vulnerable to contracting whipworm.

Humans first gave up hunting and gathering and turned to farming in the Near East, around 10,000 years ago.

A very basic form of a toilet for removing waste was invented in the 4th century BC in Mesopotamia, 3,000 years after the ancient village flourished. 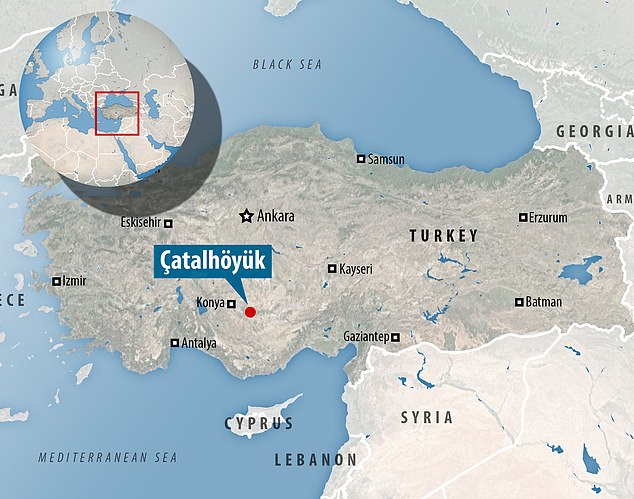 The discovery of parasite eggs in preserved human faeces dating back 9,000 years ago from the ancient village of Çatalhöyük (shown) in Turkey is the earliest archaeological evidence for intestinal parasite infection in the mainland Near East

It is known that the population of Çatalhöyük grew growing crops such as wheat and barley, and herding sheep and goats.

The pre-historic town is famous for being an incredibly well preserved early village founded around 7,100 BC.

Dr Mitchell added: ‘As the village is one of the largest and most densely populated of its time, this study at Catalhoyuk helps us to understand that process better.

Today up to 800 million people across the globe are infected with whipworms. They grow up to 2 inches (5cm) in length and live on the lining of the intestines of the large bowel.

Whipworm is spread by the contamination of food or drink from human faeces that contain the worm eggs.

Adult worms can live for 5 years and after mating and the fertilised eggs are mixed in with the faeces.

A heavy infection with whipworm can lead to anaemia, diarrhoea, stunted growth and reduced intelligence in children.

‘Now we need to find ancient faecal material from prehistoric hunter gathers in the Near East, to help us understand how this change in lifestyle affected their diseases,’said Dr Mitchell.

The full research is published in the journal Antiquity.

WHAT WAS THE PRE-HISTORIC VILLAGE OF CATALHOYUK?

The town is famous for being an incredibly well preserved early village founded around 7,100 BC.

The site is exceptional for its substantial size and length of the settlement.

The earliest building period at Çatalhüyük is tentatively dated to about 6700 BC and the latest to about 5650 BC.

In addition to a hearth and an oven, houses had platforms for sleeping, sitting, or working.

Edible grains and oil-producing seeds and nuts were extensively cultivated.

Excavation of the religious quarter produced a series of shrines with wall paintings of exceptional brilliance.