World’s oldest skin lightening make-up – which was filled with LEAD – was used in China more than 2,700 years ago – 300 years before Romans adopted same technique

The world’s oldest white lead make-up has been found inside a tomb of an elite individual who lived in China more than 2,700 years ago, which suggests the ancient people of this area were using skin whitening cosmetics nearly 300 years before ancient Romans adopted the practice.

White residue was found inside six bronze containers buried in a tomb that was found at a nobility cemetery in northern China, which belonged to a patrician who lived in the early Spring and Autumn Period (770BC to 476 BC).

Experts have long believed that ancient Romans paved the way for the skin whitening technique, research suggests they began using it around 500 BC, but the discovery suggests it was ancient Chinese who first introduced the technique.

Archaeologists with the University of Chinese Academy of Sciences (UCAS) also note that the residue could be much older than the tomb.

White lead make-up was found inside an ancient Chinese tomb that dates back more than 2,700 years ago. This suggests the cosmetic was used long before it was adopted by the ancient Romans

White lead make-up was also adopted by the elites of Europe in the 1600s, which combined the mineral with vinegar.

However, there was a price for this so-called beauty – it caused severe health issues for those who wore it religiously.

Using this as a pigment caused lead poisoning, skin damage and even sometimes resulted in death.

But white colored skin was considered a high status and is shown in many ancient Chinese artworks. 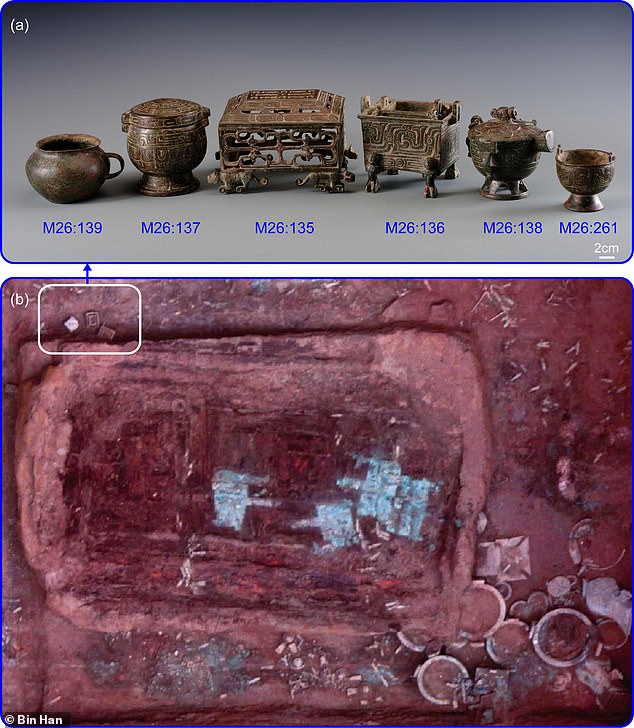 The make-up was found inside six bronze containers (top) that were buried in a tomb of a nobleman that lived some 2,700 years ago 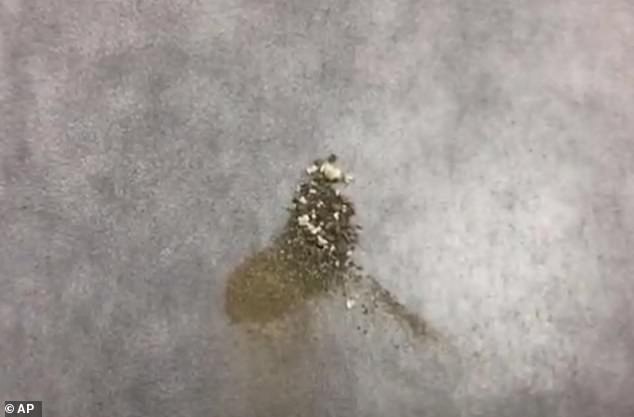 After the UCAS team analyzed the white residue, they found it was pure cerussite, a mineral consisting of lead carbonate and is an important ore of lead.

Cerussite is also toxic to the human body.

‘Although the age of the lead carbonates does not fall exactly within the burial date of the tomb, it still reveals the synthetic origin of ancient samples because natural cerussite was observed to have a significantly larger offset,’ researchers shared in the study published in the Journal of Humanities and Social Sciences.

The team also identified phosgenite, of lead chlorocarbonate, in the powder that suggests the residue was made by mixing the two – thus resulting in synthesized make-up.

Not only did royalty and aristocrats sport the toxic make-up, but Samurai warriors in Japan also used the technique – and it was detrimental to their offspring. 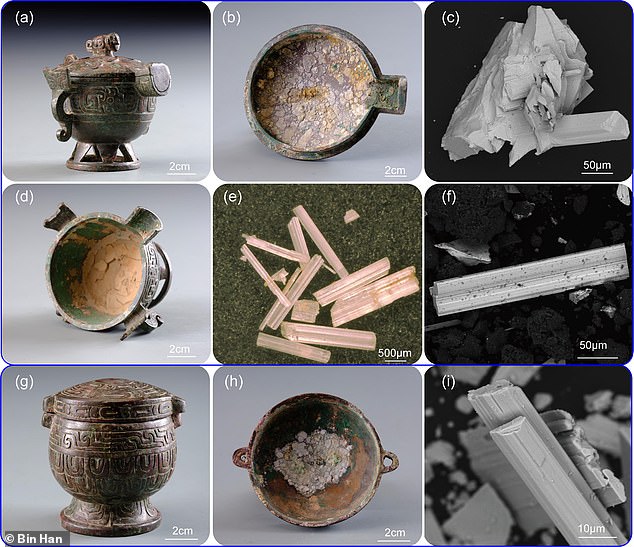 After the UCAS team analyzed the white residue, they found it was pure cerussite, a mineral consisting of lead carbonate and is an important ore of lead

A 2012 study found children of the samurai class suffered severe lead poisoning because of the cosmetics used by their mothers and grew up deformed, disabled and backward.

These handicaps left them unable to cope with political crises, leading to instability that led to the eventual downfall of their feudal system, the study claims.

Tamiji Nakashima of Japan’s University of Occupational and Environmental Health studied the bones of Samurai children and adults to discover their cause of death.

Based on chemical and X-ray analysis, the bones of the children in the study contained levels of lead dozens of times higher than both the male and female adults, the researchers told Germany‘s Der Spiegel magazine.

Those under three were the worst off, with a median level of 1,241 micrograms of lead per gram of bone – more than 120 times the level thought to cause neurological and behavioral problems.