The world’s only known albino orangutan has been released back into the Borneo jungle after she was found starving in an Indonesian village.

Alba spent more than a year in captivity getting back to a healthy weight and the Borneo Orangutan Survival foundation released her back into the wild on Wednesday.

The orangutan was named Alba, which means white in Latin, after thousands worldwide responded to an online petition.

Alba climbed trees, foraged for food and began building a nest after being released back into the jungle.

This is the moment Alba the albino orangutan is released by a conservationist of the Borneo Orangutan Survival foundation inside Bukit Baka Bukit Raya National Park in Central Kalimantan, Indonesia 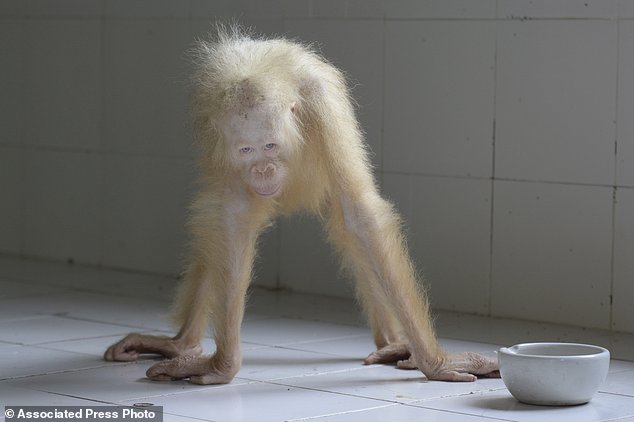 Alba had to put on a lot of weight after she was found starving and dehydrated in the Indonesian village; this was her in May 2017 in the early stages of her rehabilitation 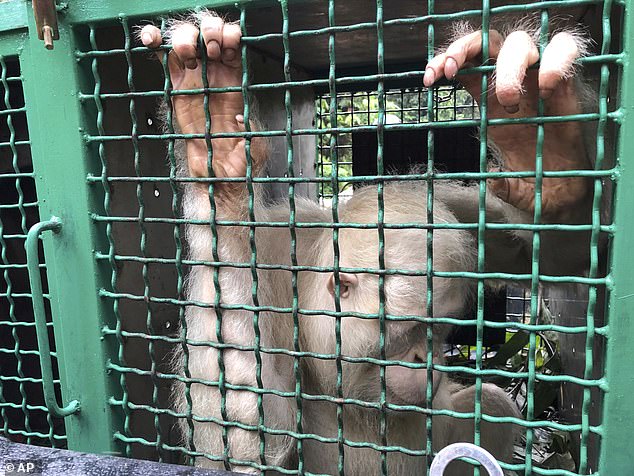 She was rescued in April last year and was rehabilitated alongside another orangutan called Kika who was released with her.

The apes were freed inside Bukit Baka Bukit Raya National Park after a more than 24-hour journey from their rehabilitation center by vehicle, boat and hiking.

The foundation originally planned to create a 5-hectare (12-acre) ‘forest island’ for Alba rather than a release into truly natural habitat because of health issues related to her albinism including poor sight and hearing and the possibility of skin cancer. 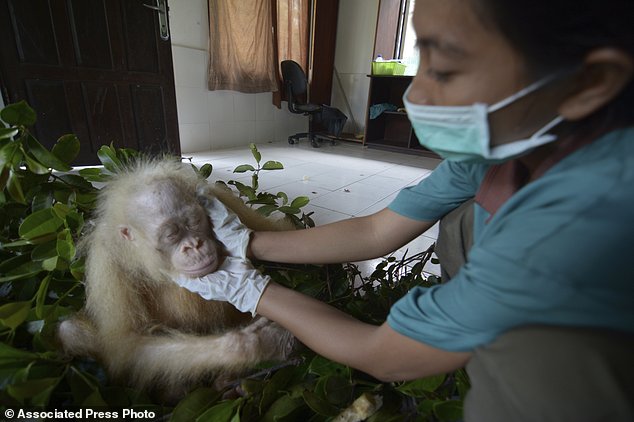 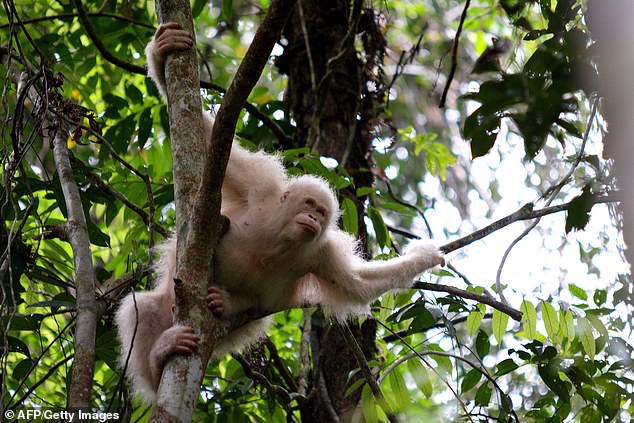 But the government’s Natural Resources Conservation Agency and other agencies decided it was appropriate to release Alba into the wild because of her strong physical condition and intrinsically wild behavior.

She will be electronically tracked and regularly monitored by a medical team.

‘Alba has no inferiority complex as we imagined before. She is very confident compared to other orangutans,’ said veterinarian Agus Fathoni.

‘I think the real threat actually comes from humans. What we’re worried about is poaching where this very special condition makes her a target,’ he told The Associated Press.

Patrols of Alba’s new home by national park and conservation agency staff will aim to deter poachers, though they admit the number of personnel is limited. 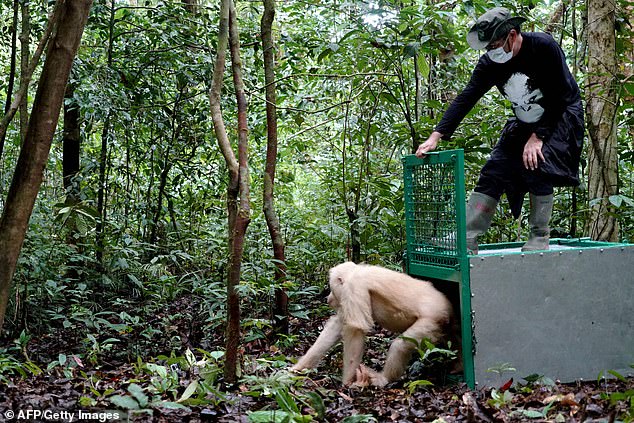 Alba can be seen making her first tracks back into the jungle and she was observed climbing trees, foraging food and building a nest after her release 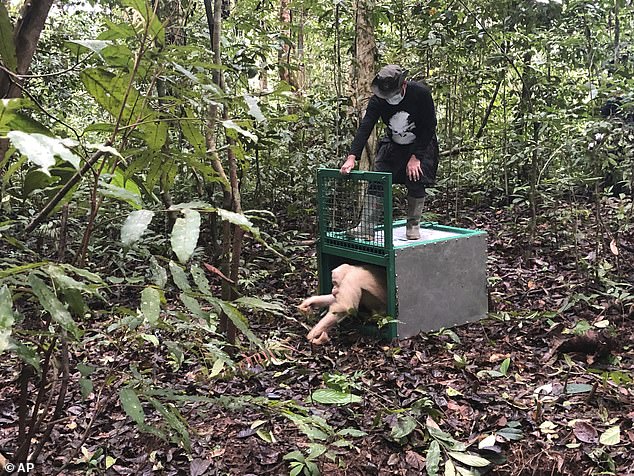 ‘We don’t have enough to cover all the area of the national park but we’re confident of covering all the patrol lines that we have set,’ said national park official Wirasadi Nursubhi

Orangutans, reddish-brown primates known for their gentle temperament and intelligence, are critically endangered and only found in the wild on the Indonesian island of Sumatra and on Borneo, which is divided among Indonesia, Malaysia and Brunei.

The International Union for Conservation of Nature, which declared Borneo’s orangutans critically endangered in 2016, says their numbers have dropped by nearly two-thirds since the early 1970s as plantation agriculture destroyed and fragmented their forest habitat.

The Sumatran orangutan is a separate species and has been critically endangered since 2008. 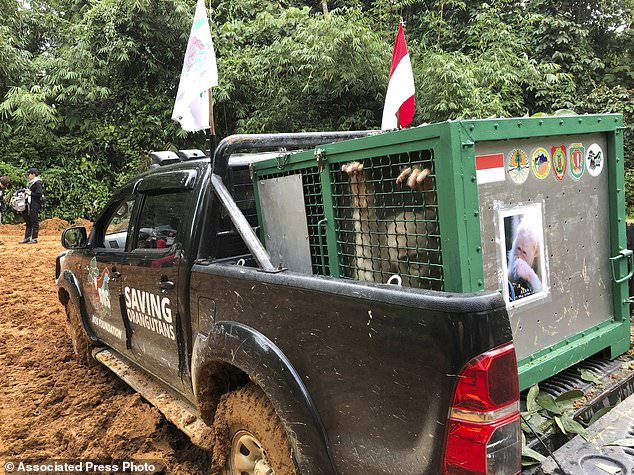 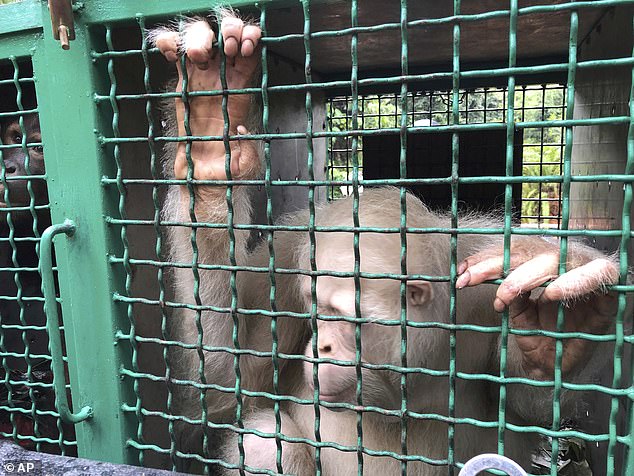 Alba the albino oragutan gazes out at the jungle as experts prepare to release her into the Bukit Baka Bukit Raya National Park in Central Kalimantan, Indonesia

Alba, approximately five years old, was given final medical tests and anesthetized for the journey to Bukit Baka Bukit Raya.

Workers shouted ‘Alba’s going home’ as her cage was lifted onto a truck at the Nyaru Menteng Rehabilitation Center in Central Kalimantan province on Borneo.

‘It’s true this is a big gamble but we hope that with our collaboration we will win the big bet we have made today’ said the orangutan foundation’s chief executive Jamartin Sihite after releasing Alba from her cage.