With the unstoppable rise of internet shopping, the occasional misguided purchase has become a fact of life.

But these women have been left fuming after being duped into buying dresses that looked nothing like the ones that were advertised online.

Posted on the Facebook page Knock off Nightmares, hundreds of disgruntled shoppers have shared snaps of summer dresses, prom outfits and even bridal frocks that looked nothing like the items they saw online.

Some were lured in by low prices, while others thought they were getting on the real deal – until they tried on these frocky horrors. 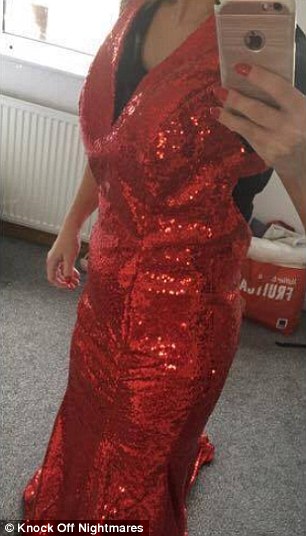 One London-based shopper was horrified after paying £128 for this ‘made to measure’ dress from Singapore, which was not only ill-fitting, it looked nothing like the gown on the model

A warning on the Facebook group, which has some 110,000 followers, reads: ‘The point of this page is to inform girls of what may be delivered if they order from a knock-off site.

‘You can buy sale dresses from various sources, you can buy second hand, or you can support your local bridal store.

‘The choice is entirely yours. Just remember if it looks too good to be true, generally it is.’

The page owner adds: ‘Please know, there are no online sites that show stock designer photos at a fraction of the real price that we ever would recommend.

‘Weddings are a magical time so don’t let it be ruined by a nightmare dress.’ 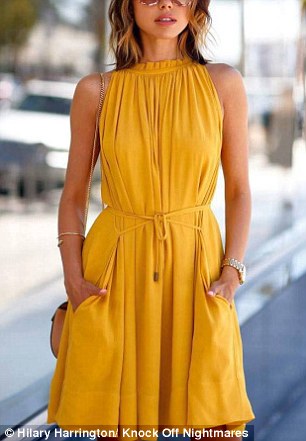 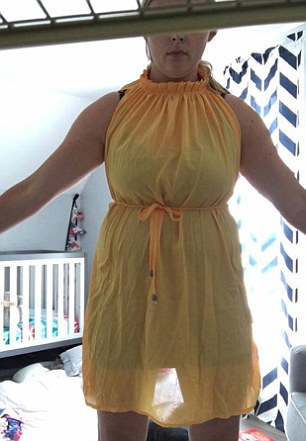 One disgruntled shopper shared a snap of the canary yellow summer dress she thought she was buying – alongside the tacky, see-through number that arrived through her letterbox 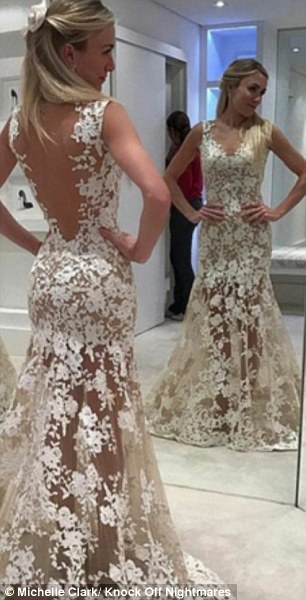 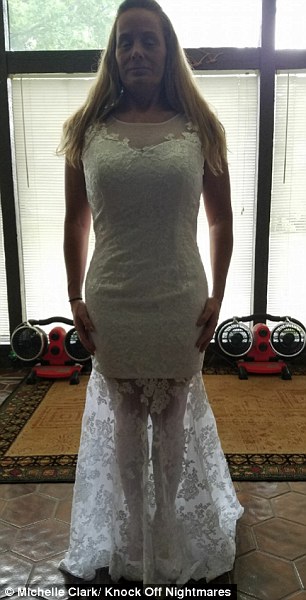 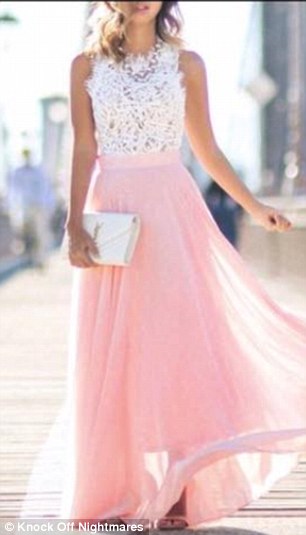 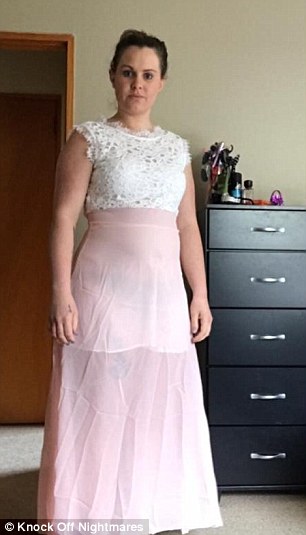 Alana Boekhout was after a dress for her ‘three beautiful bridesmaids’ – but ended up with this instead. She said the gowns were ‘completely see-through, ankle length and under skrit at thigh length not floor’

As noted by the page owner, the bust line on this black dress has ‘gone from sweetheart to child’s sun dress’, the waistline has shifted and the frock draws comparisons to a ‘side apron’

This shopper complained: ‘The material is like a shower curtain or umbrella fabric, and erm well what else can I say? I realise I’ve not got the athletic physique of years ago but still!’ 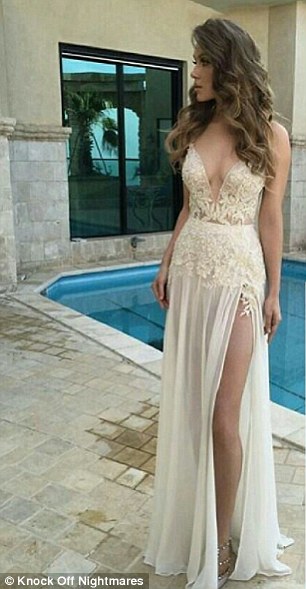 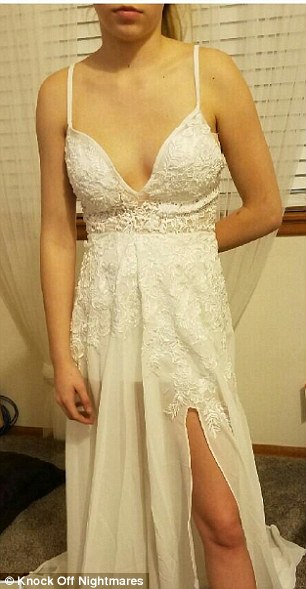 This shopper noted that the retailer who sold her the frock for €170 had good reviews – but when it arrived, the entire back was ‘bunched up and even sewn wrong’ – and she struggled to get her money back 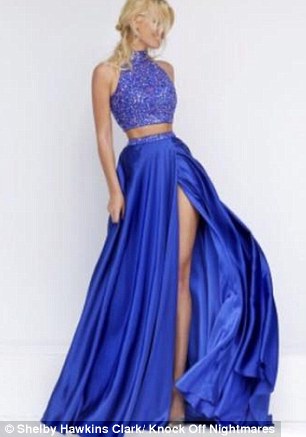 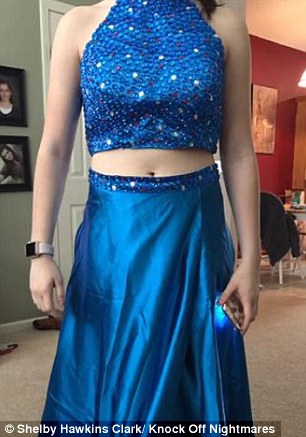 This shopper was far from impressed when she ordered this prom dress – and to add insult to injury, the retailer insisted there was ‘nothing wrong with it’ – blaming the difference in quality on the ‘lighting’ 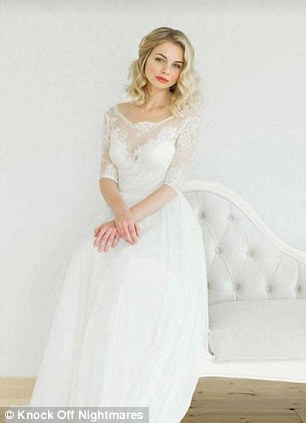 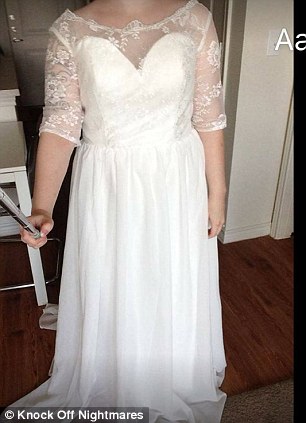 This ‘victim’ ordered according to a size chart, but when the dress arrived she noted that the underlining was too tight and ridged to add a petticoat – while the ‘chiffon’ felt like costume fabric 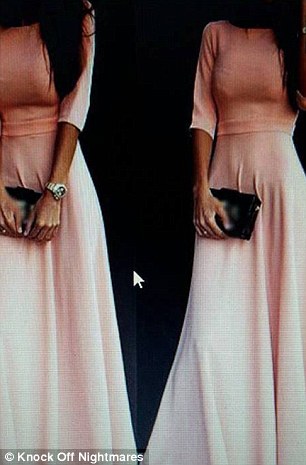 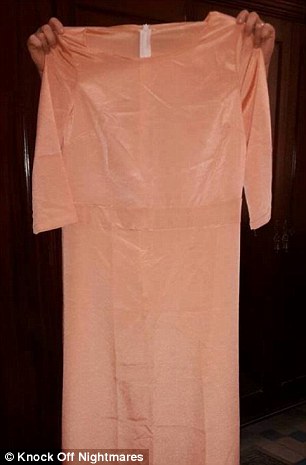 Luckily, Devan Woods saw the funny side when she ordered a trendy frilled tracksuit – and instead ended up with a ‘whole clown suit’ 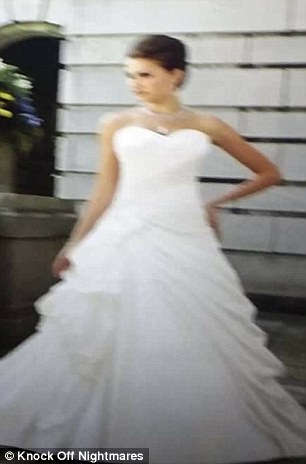 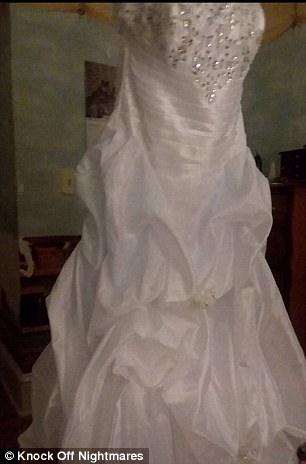 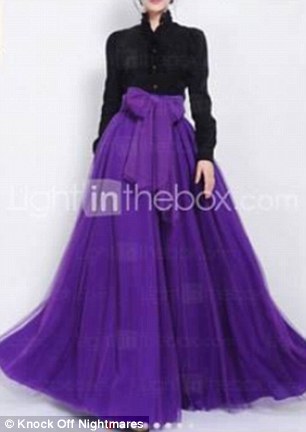 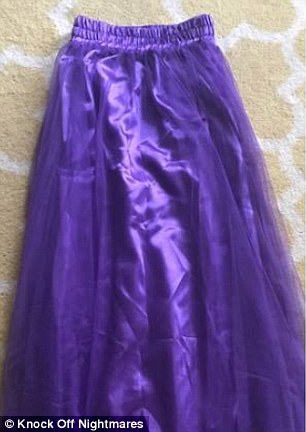 This shimmering, purple princess skirt seemed almost too good to be true at $9.99 – and indeed it was, if this tacky knockoff is anything to go by 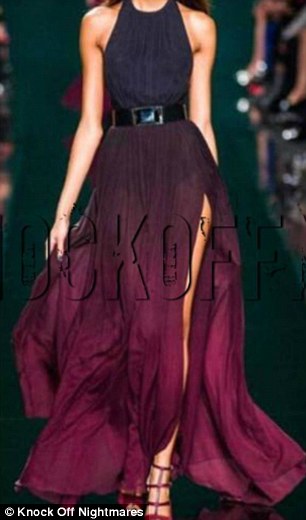 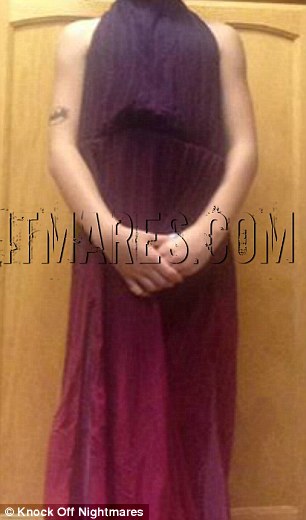 This irate shopper explained that she had ordered a size XL, which ended up just about fitting a ‘petite seven-year-old’. It also took three months to arrive and looked nothing like the original 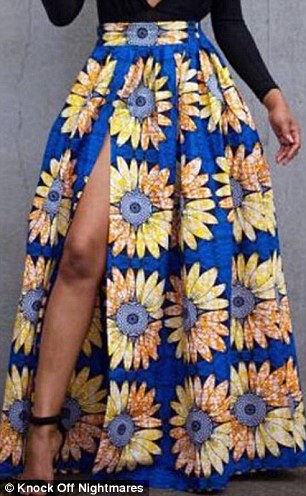 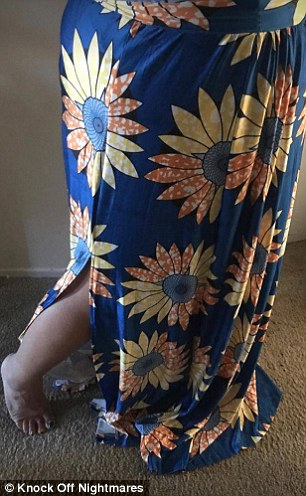