Would they dared have played A Very English Scandal for laughs if Thorpe’s victim had been a woman?

Having thoroughly enjoyed John Preston’s brilliant book about the Jeremy Thorpe affair, A Very English Scandal, I was looking forward with relish to the television adaptation.

Some people have criticised the series for turning a conspiracy to murder into a Carry On-style romp. But how could it not?

From ‘Bunnies can and will go to France’, to Norman Scott’s evidence about ‘biting the pillow’ and satirist Peter Cook’s sublime parody of the Old Bailey judge’s summing up — ‘You will now retire to consider your verdict of not guilty’ — the whole case was a gold mine of hilarity. 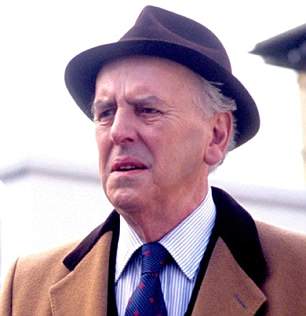 Hugh Grant has rightly been praised for capturing the very essence of Thorpe (left), an Old Etonian chancer in a felt trilby and camel Crombie — the kind of English gent Arthur Daley (right) aspired to be

So the producers of the BBC’s version can be forgiven for playing it for laughs.

I was pleased to see they included a walk-on part for the late columnist Auberon Waugh, who stood against Thorpe in the 1979 General Election as the Dog Lovers’ Party candidate, in memory of the Great Dane Rinka, shot dead on Exmoor during the bungled attempt to kill Scott.

Hugh Grant has rightly been praised for capturing the very essence of Thorpe, an Old Etonian chancer in a felt trilby and camel Crombie — the kind of English gent Arthur Daley aspired to be.

In keeping with the Carry On vibe, Ben Whishaw played Scott like a cross between Kenneth Williams and Mick Jagger, with a dollop of Frank Spencer thrown in for good measure.

The TV production didn’t stray far from Preston’s book, a beautifully crafted work of journalism which frequently had me laughing out loud.

Watching the final part on Sunday night, however, there was a scene which gave me pause for reflection.

It was when Scott was in the witness box giving evidence about the first time Thorpe had sex with him.

When Scott mentioned ‘Vaseline’ and ‘biting the pillow’, the courtroom roared with laughter. As did we all, back in 1979, and again in front of our televisions on Sunday.

And yet. This is not the place to go into the gory details, but when I read the book it was apparent that this incident, which took place in Thorpe’s mother’s house, could not be described by any stretch of the imagination as consensual.

‘Rape’ would be a more accurate word. Scott talks about the excruciating physical pain, which reduced him to tears. ‘I thought he was going to kill me.’

The following day, Thorpe took him for coffee, gave him a £10 note and fixed him up with a room in a lodging house, where the Liberal leader would turn up whenever he felt the need to, as he put it, ‘relieve himself’.

Their complex, mutually exploitative relationship has been described by Stephen Frears, the director of the TV series, as a ‘love story’. But it certainly didn’t start out like that.

Scott may well have been everything the trial judge said he was: ‘A hysterical, warped personality, accomplished sponger… a fraud, a whiner, a parasite.’

But it was Thorpe who had the whip hand, the real power.

When they met, Thorpe was an MP, Scott a 21-year-old stable boy. Try looking at this through a modern telescope.

We live in an age of #MeToo hysteria, in which powerful older men have had their careers destroyed for allegedly preying on younger women.

An inadvertent brush of the knee, an ‘inappropriate’ glance, a clumsy pass are judged to be akin to rape itself.

We’ve had the moral panic over Jimmy Savile, the absurd Paedos In High Places inquiry, the hounding of ageing disc-jockeys and TV personalities, and all manner of false allegations made against long-dead politicians.

Some celebrities have been convicted of ‘historic’ sex offences.

But, to the best of my knowledge, no one has suggested that Jimmy Savile’s crimes should be turned into a prime-time comedy drama series.

Thorpe comes out of A Very English Scandal as a thoroughly bad egg, whose attempts to have Scott killed were covered up by a complicit Establishment.

Curiously, though, there has been little condemnation of the sexual dynamic between the two men. If anything, it has been treated sympathetically.

Yes, I’m well aware that in the Sixties, when they first met, homosexuality was still a crime. Thankfully, we’ve come a long way since those unenlightened days.

Yet although the police have inevitably had to get in on the act, they haven’t (so far) held a press conference outside Thorpe’s old house, appealing for more of his ‘victims’ to come forward.

I can’t help wondering if the reaction might have been different if Norman Scott had been a 21-year-old stable girl called Norma.

What if Thorpe had raped Norma so violently that she had sustained injuries which reduced her to tears, afraid he was going to kill her?

And then given her money and installed her in a bedsitting room, so that he could visit her for sexual gratification whenever he felt the urge.

Would we still find that quite so hilarious a subject for Sunday night TV entertainment?

Somehow, I suspect not.

My late father-in-law, Jim, was a baker, who made birthday cakes shaped to order.

Children’s TV characters such as Thomas The Tank Engine and Dougal, from The Magic Roundabout, were especially popular.

Filled with cream, covered in chocolate or icing, they were always in demand. Kids love novelty cakes.

That was in the Seventies, before the advent of interfering busybodies on a mission to tackle childhood obesity.

Not that there were many fat kids back then. They stayed slim by running around and playing outside, not spending all day glued to smartphones and iPads.

The killjoys’ latest target is a recipe for Dalek cupcakes, put out by the BBC’s Blue Peter programme.

Naturally, these ‘experts’ have accused the Beeb of acting irresponsibly by encouraging children to make cakes loaded with calories instead of eating carrots.

So what? Sticky, sugar-laden treats are part of what kids’ parties are all about.

They’re harmless, unless eaten every day — which, of course, they’re not.

The protests are led by Noel Janis-Norton, a behaviour specialist (whatever that is) and founder of something called the Calmer, Easier, Happier Parenting Centre in London, who says the recipes ‘undermine’ attempts to teach children to eat well.

Oh, for heaven’s sake. Where do they find these people? And don’t they ever take a day off?

They should be buried up to their necks in chocolate and showered with whipped cream.

You can’t keep your hat on, Graham

A customer was kicked out of Tesco for refusing to take off his flat cap.

Graham Cattermole, 64, was told to remove the hat by a security guard at the supermarket’s branch in Upper Gornal, West Midlands.

He had fallen foul of the ‘no headgear’ rule, designed to tackle potential shoplifters wearing hoodies, baseball caps and crash helmets to beat CCTV cameras.

Graham complained: ‘I’m nearly 65 and I’ve got a walking stick, so it’s not like I’m going to hold the place up.’

No it’s not, Graham.

But you do come from a generation, like me, which was always taught it’s the height of bad manners for a man to wear a hat indoors.

Zing! Went the strings of my heart

A few years ago, a Good Samaritan saved the life of a man who suffered a heart attack by administering CPR to the tune of Stayin’ Alive by the Bee Gees.

Now we learn that the best method is to pump someone’s chest in time to the Macarena.

What if you don’t know the Macarena? Apparently, any song with a ‘thump, thump, thump’ rhythm will do the trick.

But it’s probably best to avoid Queen’s Another One Bites The Dust.

As the mercury rises into the 80s (in old money), boys at a mixed secondary school in Oxfordshire have been told they can’t wear tailored shorts.

If they want to beat the heat, they will have to wear skirts, like the girls, as part of the school’s ‘gender-neutral’ uniform policy.

So under the guise of stamping out discrimination against transgender pupils, they’re now forcing boys to choose between sweltering in long trousers or wearing a skirt.

Where is this trans nonsense all going to end?

I joked recently that it would soon be compulsory to install urinals in all-girls’ schools. Now it’s only a matter of time.