Would you Adam and Eve it? Chas & Dave won’t stop talking

On A Little Bit Of Us, Chas & Dave’s new album, the cheery ‘rockney’ duo address the topic of Chas Hodges’ recent cancer treatment in a heartfelt song entitled Sling Your Hook.

‘It’s my way of saying f*** off to cancer,’ Hodges declares in typically no-frills fashion. ‘Sling your hook, on your bike, vamoose, skedaddle… It’s turned out great.’

He unbuttons his shirt to show a blue pinpoint just below his breastbone, the spot his radiographer used to line up the machine for Hodges’ treatment. ‘It’s the only tattoo I’ve got,’ says the 74-year-old pianist. ‘Hardly David Beckham, am I? The doctor sees me every three months now, and last time he said that everything looked fine.

‘It was in my gullet, the oesophagus. I had radiotherapy and chemotherapy. Luckily, I caught mine early. Trick is, if there’s something you’re unsure of, don’t hesitate, get down to the doc’s. So many people don’t.’

Foolishly dismissed by some as purveyors of snug-bar ditties, Hodges and Peacock’s timeless blend of music hall, boogie-woogie and rock ’n’ roll is highly respected by fellow musicians

‘I had to go and have my heart examined,’ says Peacock, 72. ‘I went a bit wonky, light-headed, but I’ve had extensive tests on it all, and they said it’s all clear.’

The irrepressible duo, acclaimed for their hits Gertcha, Rabbit and Ain’t No Pleasing You, are in fine spirits at their favourite pie-and-mash emporium in Hoxton, London (‘nice soft food, see?’).

Foolishly dismissed by some as purveyors of snug-bar ditties, Hodges and Peacock’s timeless blend of music hall, boogie-woogie and rock ’n’ roll is highly respected by fellow musicians. Paul McCartney swears by them.

Before teaming up professionally with Peacock in 1974, Hodges backed rock ’n’ roll icons Gene Vincent (‘he could be difficult with certain people’) and Jerry Lee Lewis (‘my idol’), and toured Germany as a member of Cliff Bennett and the Rebel Rousers, opening for The Beatles.

It was during these dates in 1966 that Hodges was privy to an exclusive preview of what would become the watershed album, Revolver. ‘Paul McCartney called us into their dressing room,’ he recalls. ‘John Lennon and [manager] Brian Epstein were there, and he played an acetate [test pressing] of the record. It didn’t even have a name at that stage.

‘Paul was just sitting there staring at me, so imagine when Yellow Submarine came on. Never heard it before in your life. “In the town, where I was born…” I didn’t know whether to laugh or what.’ 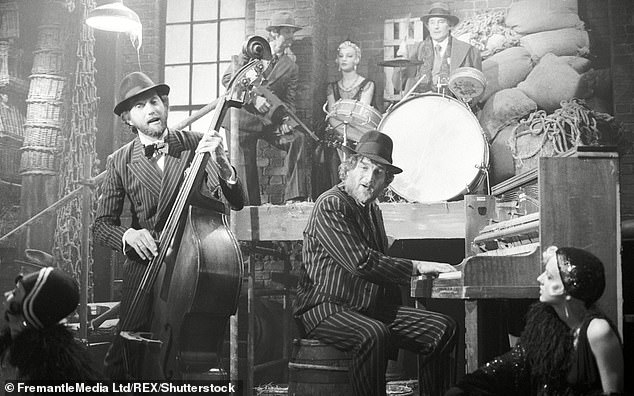 Chas & Dave on The Kenny Everett Show in the Seventies. Chas & Dave are unconcerned by current musical trends, yet they still have fans in unlikely quarters

In 1979, Hodges joined three of The Beatles (Lennon was in New York) at Eric Clapton’s Surrey estate for a party to celebrate the guitarist’s marriage to Pattie Boyd. It was the Fabs’ first performance together since the Apple rooftop set a decade earlier. ‘It was in a marquee in Eric’s garden,’ he says. ‘He had a stage set up with instruments in case anybody wanted to play. I got up and started playing Gertcha on the piano and the next minute I see Ringo had got up too. He gave me a smile and started banging away. Then George Harrison joined in and I look up and Paul was plugging in and suddenly I’m playing with The Beatles.’

Peacock, who was watching from the sidelines, didn’t get a look in: ‘I couldn’t really chuck the bass player off, could I?’

The bass-playing Beatle remains a Chas & Dave champion, and mention of Macca reminds Hodges that he must send him a copy of their new CD. ‘Paul’s always been interested in us,’ he says fondly. ‘He always gets back to me. He’ll let us know what his favourite track is and what he thinks of the new stuff.’

On a superstar name-checking roll, Hodges confirms that Clapton was due to guest on their most successful single, Ain’t No Pleasing You (it reached No 2 in 1982), but as this was during the guitar god’s drinking days, he didn’t make the recording. ‘I’m glad it didn’t happen,’ Hodges sniffs. ‘It would have been a hit, but to this day, people would have been saying, “Oh, it was only a big hit because Eric was on it.”

‘We toured with Eric and said, “Let’s get him to play some guitar on it”, but he was so p****d. You’d get up on tour at ten o’clock in the morning and he’d be up at the bar on double vodkas.

‘I was never an alcoholic but I was a heavy drinker,’ says Hodges. ‘I was overdoing it and I enjoyed every minute. Brandy and ginger ale, I loved it. But I never went on stage drunk, I wouldn’t let it get in the way of the job.’

Hodges has been married to his wife Joan since 1966, and they have two grown-up children. His son Nik now drums with Chas & Dave, after the death of Mick Burt in 2014.

The loss of Peacock’s wife, Sue, to lung cancer in 2009, after more than 30 years of marriage, led to a temporary hiatus for the band. ‘It was such a horrible time,’ says Peacock. ‘I don’t know what I did. It’s all a terrible blur.’

‘Our wives were best mates,’ says Hodges. ‘I’m a godfather to his children. We used to have parties together with our families.’

Could Peacock find love again? ‘Not love love,’ he replies quietly. ‘I’ll never find another Sue. I’m happy enough as I am.’

After his wife’s passing, Peacock immersed himself not in music but painting horse-drawn wagons, becoming the go-to guy for flamboyant Romany refurbishment. ‘I’ve done so many gypsy vehicles over the years. I’ve been building them as well. They go for a lot of money too. One I built was on the market for 100 grand.’

Hodges’ main hobby is his Hertfordshire allotment, although he recently treated himself to an £8,000 1908 Steinway upright piano. Money, both insist, is not a motivation. Having stormed Glastonbury in 2005, they could still make a handsome living on the summer circuit. ‘But, to be honest, festivals are a f***ing nuisance,’ Hodges groans.

Chas & Dave are unconcerned by current musical trends, yet they still have fans in unlikely quarters. The Libertines are devout followers, as are Jools Holland and Jamie Cullum (‘He told me that listening to us as a nipper got him into playing the piano,’ says Hodges).

Perhaps their least likely cheerleader was Princess Margaret, whom they met at a Children’s Royal Variety dinner in 1982. ‘We’d gone to the bar for a beer, and she beckoned us over,’ Peacock says. ‘Sitting right next to her, I was. She said to me, “Do you know a song called Knocked ’Em In The Old Kent Road?” and I just started singing it to her. People were looking at me, shaking their heads but she said, “That was my granny’s song. She loved it.’”

Lesser royalty, such as the Beckhams, are also partial to a jolly-up, it seems. ‘Victoria’s mum and dad live near me and they came to see us in Southend,’ says Hodges. Rumour also has it that their son-in-law, a Leytonstone lad, also enjoys a bit of Chas & Dave. ‘It wouldn’t surprise me at all if David was a fan of ours,’ says Hodges. ‘Where he’s from, he would need to have something wrong with him not to be.’