Would you CHARGE your family for Christmas dinner?

A grandmother-of-four tired of splashing out hundreds of pounds on Christmas dinner has revealed she now charges her family £30 per head.

Hayley Garbutt, 50, who lives near Scarborough, north Yorkshire, explained on ITV’s This Morning that she began asking for help with the bill because she was spending £500 on putting on a festive spread for her extended family.

As the mother-of-three’s family grew so did the cost, and so she began asking for contributions – a step some This Morning viewers branded ‘outrageous’ and ‘terrible’.

However, others were more sympathetic to her plight, praising her for being bold enough to ask for money for food and alcohol and even calling her a ‘legend’.

Grandmother-of-four Hayley Garbutt, 50, explained that as her family grew so did the cost of hosting Christmas dinner each year so she started charging £30 per head

‘Just ask your guests to bring something. But charging family is terrible,’ complained one.

‘If I had to pay for Christmas lunch at my family’s, I would not be going! I’m hosting Boxing Day for my family I would never dream of charging them,’ added another in agreement.

‘Charging family and guests £30 for a Christmas lunch.. outrageous! Not sure if she charges the same for the kids, but if she does, a family of 4 is going to cost £120!

‘How about everyone contributes different parts of the meal? Someone buys the turkey, starter, pud etc,’ suggested another.

Hayley, who is married to engineer husband Maurice, 52, explained: ‘I was catering for everybody and overspent. The cost of living has gone up.

‘And it just game to the point where the family grew, I was getting more and more grandchildren and I’d have my son and my daughters round, and their partners.

‘It was just too much. I think they understood that. We all sat down and discussed it and they were happy to come to my house and me cook it all.’

Others on social media supported Hayley’s idea: ‘I think that’s fair enough, unless the family members are taking it in turns year to year to host then I see nothing wrong in everyone contributing to the cost.’

Another added: ‘This lady that hosts Christmas Day for her family on #thismorning is a legend!’ 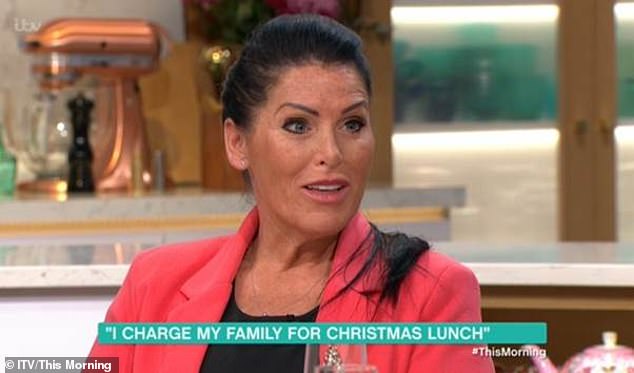 Hayley explained that everybody was catered for, food tastes as well as lots of alcohol as many of her family members would stay until the late hours of the day 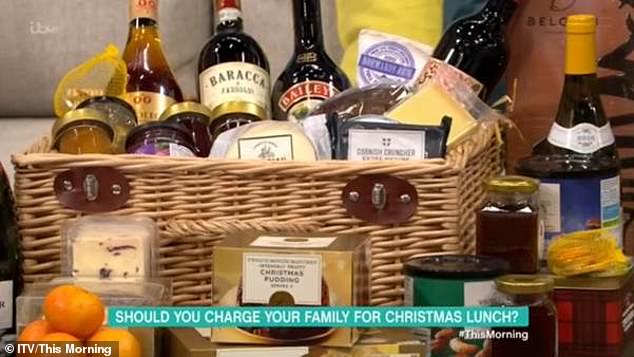 The This Morning team also presented Hayley with an enormous Christmas hamper full of goodies for her and her family to enjoy, along with a tree

Hayley explained that everybody was catered for, from different meats, cheeses, vegetables as well as lots of alcohol.

She said that as many of her family members would stay until the late hours of the day, that the supplies needed to last.

The mother-of-three said that despite the pressure to host it was easier for her family who have tried eating out at restaurants before – but it was difficult to manage with the children.

‘We make it a massive family gathering. We see each other a lot but I don’t get to see my son as much. It’s nice were all together and its not a selfish thing to do,’ Hayley added.

She not only cooks the spread but she also says she likes to wash up and clear everything away ‘that’s how I give back’.

Presenter Phillip Schofield also presented Hayley with a hamper full of cheese and booze, as well as a Christmas tree to ‘help out’, which she was thrilled with.