Would you get a chin implant to stop snoring?

A device that provides a workout for the muscles around the tongue may be a new way to tackle snoring.

The device, implanted in the skin of the chin during a 15-minute procedure, contains a stimulator that sends out impulses to activate nerves and muscles to stop the tongue and airway collapsing during sleep — a key cause of snoring.

The U-shaped device, about the size of a thumb nail, straddles two nerves in the chin and is activated each night by placing a sticky patch that contains a chip which wirelessly prompts the stimulator to start working.

It has been approved for use in the UK following a recent trial which found that it brought major improvements in symptoms of obstructive sleep apnoea, or OSA.

Here, soft tissue around the airway, including the tongue, relax and collapse repeatedly during sleep which interrupts normal breathing causing pauses in breathing, known as apnoeas.

This can block airflow for ten seconds or more which can interrupt sleep and cause daytime tiredness. In the longer term, it has been linked to an increased risk of high blood pressure, stroke or heart attack.

A device that provides a workout for the muscles around the tongue may be a new way to tackle snoring. The device, implanted in the skin of the chin during a 15-minute procedure, contains a stimulator that sends out impulses to activate nerves and muscles to stop the tongue and airway collapsing during sleep — a key cause of snoring

The condition leads to loud snoring as the collapsed tissues obstruct the normal flow of air.

Up to two million people in the UK have obstructive sleep apnoea.

It is linked to obesity and losing excess weight can help as it takes pressure off the soft tissues.

Certain medications can also raise the risk of sleep apnoea.

One of the most effective treatments is continuous positive airway pressure, where a mask is worn during sleep which delivers a continuous supply of low pressure compressed air to keep the airway open and the tongue in place.

However, as many as a third of patients abandon it as they have problems wearing the device and find it too noisy to sleep with.

The new system, developed by Belgium-based Nyxoah, consists of three parts; an implanted stimulation device, an activation chip and patch.

The device is implanted into the skin under the chin using a local anaesthetic.

Drawing on previous studies by American researchers, scientists at Nazarbayev University and the National Laboratory Astana in Kazakhstan have found that exposing human and rat cells to an electromagnetic field frequency of 918 MHz (a common frequency used in mobile phone signals) for 60 minutes reduces oxidative stress (cell damage caused by the build-up of toxic protein fragments in the brain characteristic of Alzheimer’s). The researchers say this is a step forward in using radiation to treat dementia patients.

Once in place the stimulator is invisible and not felt by the patient. The device has electrodes on both sides of the ‘U’ which are sited over each of the two branches of the hypoglossal nerve, which run through the chin and control the muscles around the tongue.

Patients are given small adhesive patches resembling regular plasters to stick on the skin each night over the implanted device.

As well as a tiny chip the patch contains a battery to power it enough to activate the implanted stimulator.

The patch is removed each morning and put onto the charger. The implant can stay in place indefinitely.

The system delivers signals to the hypoglossal nerve through the night which act on the muscles around the tongue to make them contract and stop them from collapsing during sleep.

It has now been approved for use in the UK and the rest of Europe following a trial at seven centres in France and Australia.

The manufacturer says the results will be published this year, and major improvements were seen in symptoms.

A new trial, involving 110 patients, is under way at the Medical Sleep Center, Mannheim in Germany.

Commenting on the device, Jaydip Ray, a professor of otology and neurotology at the University of Sheffield, said: ‘This is very exciting for OSA — being minimally invasive and unobtrusive along with wearing comfort and long battery life, makes it all the more attractive.

‘Long-term results from the new trials would be interesting.’

Walnuts may protect against ulcerative colitis, according to U.S. research.

When mice with the condition, in which the gut is chronically inflamed, were given walnuts for two weeks, they suffered much less damage to their colons during flare-ups than mice not given the nuts. Their gut walls also seemed to heal more quickly. Writing in the journal Nutrients, the team from Texas A&M University say they are not suggesting that people with ulcerative colitis feast on walnuts.

Instead, determining which compounds in the nuts are providing protection could lead to new treatments. 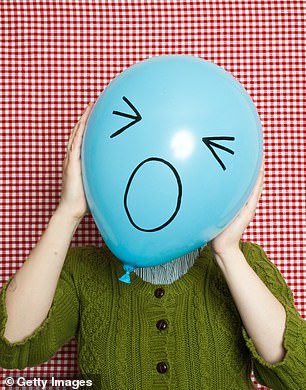 Stress triggers the fight-or-flight response which inhibits digestion — meaning nutrients won’t be absorbed as they should. ‘For example, some symptoms of irritable bowel syndrome (IBS) — a common symptom of stress — can lead to magnesium deficiency resulting in fatigue and nausea,’ says dietitian Jo Travers.

NUTRIENT STEALERS:  Everyday things can ‘rob’ our body of important nutrients. This week: Stress steals B vitamins and magnesium

Stress triggers the fight-or-flight response which inhibits digestion — meaning nutrients won’t be absorbed as they should.

‘For example, some symptoms of irritable bowel syndrome (IBS) — a common symptom of stress — can lead to magnesium deficiency resulting in fatigue and nausea,’ says dietitian Jo Travers.

‘Stress can lead to diarrhoea, which in turn can lead to malabsorption of nutrients because of the lowered transit time of food through the gut.’

It’s a vicious circle because when it’s stressed the body needs more nutrients, yet is deprived of them. In particular it needs B vitamins, essential for brain function and therefore mental health. It also needs magnesium, which helps block the stress hormone.

DO THIS: Clean your toothbrush to get rid of bacteria. Swiss researchers found putting it in the microwave for one minute was best, reports the British Dental Journal. Professor Damien Walmsley of the British Dental Association said: ‘Research indicates it is effective. Make sure there is no metal attached.’

How the warm weather affects your health. This week: Sun allergy

‘Around 10 to 15 per cent of people can experience a problem called polymorphic light eruption (PLE), which leads to pink or red itchy bumps on sun-exposed skin,’ says Dr Susan Mayou, a consultant dermatologist at the Cadogan Clinic in London.

It can take just 30 minutes of sunlight to trigger PLE in some people, and it can persist for several days. What causes it isn’t known, and it doesn’t happen every time someone is exposed to the sun. Applying sunscreen 15 to 30 minutes before going out can help prevent attacks and calamine lotion can calm itching. PLE is often confused with prickly heat — another itchy condition, caused by sweat. Speak to your GP for a correct diagnosis.